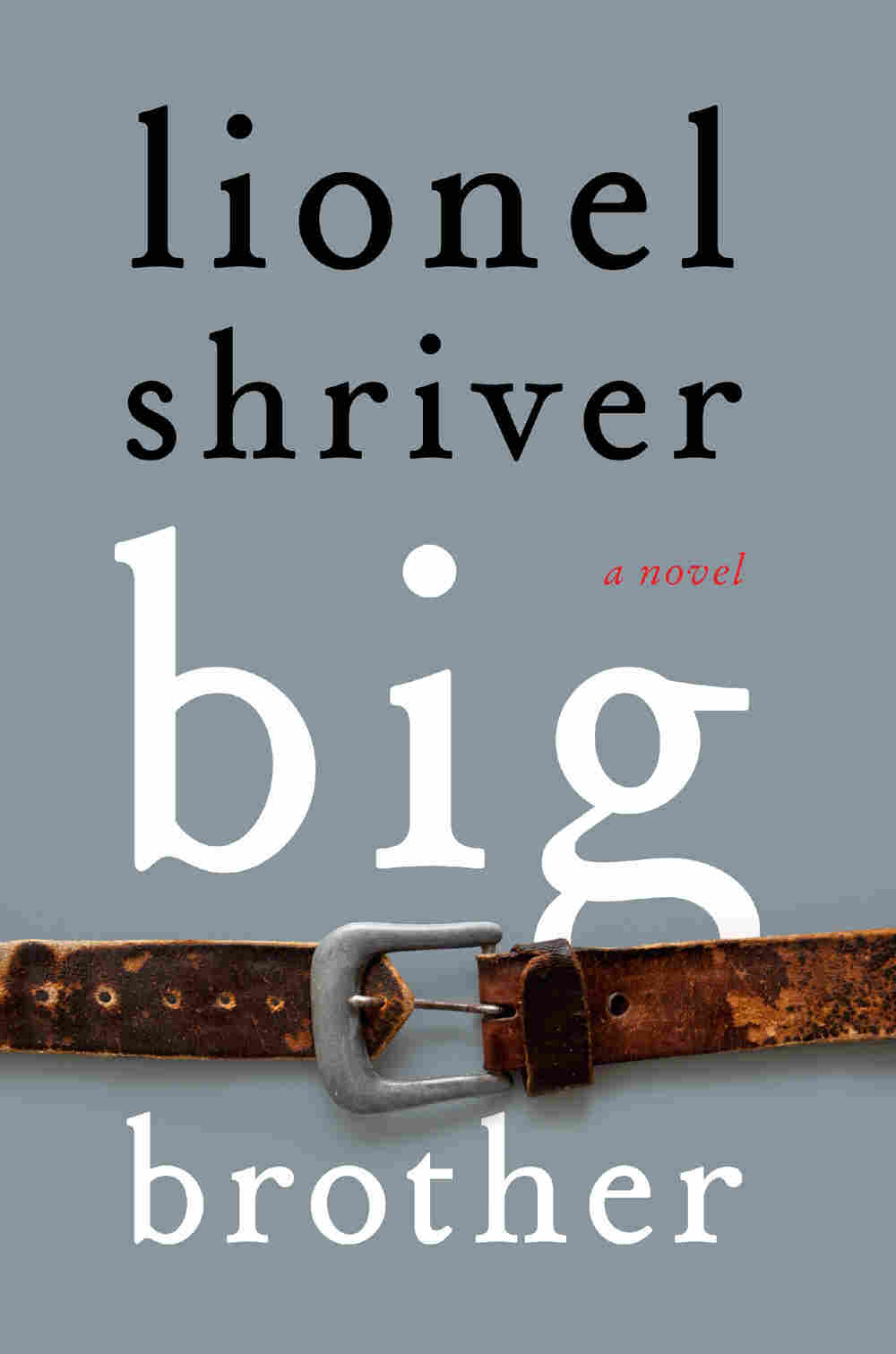 Lionel Shriver tackles a whopper of an issue in her new novel, Big Brother: obesity and the emotional connection between weight, consumption, guilt and control. She comes at this huge subject through a sister torn between saving her morbidly obese older brother, who has "buried himself in himself," and an unsympathetic, belligerently fit husband — a situation that raises questions about divided loyalties and whether blood is thicker than water. In this book, diet protein shakes are thicker than both.

Shriver, an American-born journalist and novelist who has long lived in the U.K., is drawn to hot-button topics like snackers are to potato chips. Her controversial breakthrough novel, We Need To Talk About Kevin (2003), considered the possible connection between maternal ambivalence and a Columbine-like high school murder. More recently, So Much for That (2010) offered a scathing indictment of the U.S. health care system.

The titular big brother of Shriver's novel was inspired by her own older brother, who died from complications of obesity in 2009 at age 55, leaving the writer with nagging questions about whether she could have saved him. Clearly, one lure of fiction is the possibility of exploring alternate scenarios and what-might-have-beens. (Her 2007 novel, The Post-Birthday World, spins several alternate trajectories for each of its characters.) In Big Brother's fictional scenario, Shriver's narrator attempts to rescue her enormous brother from his "slow-motion suicide-by-pie" by becoming his full-time, live-in weight-loss coach, putting her marriage on the line in the process. Among the many questions Big Brother poses is: Are we our brother's keeper?

Read And Hear An Excerpt

What a plot — and what names — Shriver has cooked up! It's a lot to swallow, and I was initially as skeptical as I am about fad diets — but the book grows on you. The narrator, 40-year-old Pandora Halfdanarson, threw over an arduous catering business after the freakish success of her novelty custom Baby Monotonous dolls, programmed to spout a menu of the recipients' oft-repeated platitudes. She lives in the Iowa Corn Belt with her husband of seven years, Fletcher Feuerbach, an underappreciated furniture craftsman, and his two teenage children. Although Fletcher is purportedly the love of Pandora's life, it's hard to understand why: He is not just hyper-disciplined about food and exercise, he's a "nutritional Nazi" and glowering killjoy. He's also an in-your-face tooth flosser, "hurling bits of Swiss chard two feet across the table."

Enter Pandora's washed-up, jazz pianist brother, Edison Appaloosa, an oversized presence even before he gained hundreds of pounds. Unlike Pandora, he adopted their famous, narcissistic father's horsey stage name. The two siblings share the scars of a childhood overshadowed by Travis Appaloosa's long-running television drama, Joint Custody, which featured idealized versions of themselves. Now, besides rehashing old episodes, Edison inundates his sister's household with mountains of verboten chocolate chip pancakes and cheesy pastas. Instead of al dente, it's detente at best. No one discusses the elephant in the room.

A Novel Tallies The Real Cost Of Health Care

Don't expect any tantalizing, mouthwatering descriptions of food, glorious food. In fact, Big Brother could double as an appetite suppressant. In addition to nauseating diet shakes and Fletcher's "viciously nutritious" mounds of bulgur and quinoa, Shriver's propensity for gross-out scenes leads to stomach-curdling binges and several reminders that what goes in must come out. When Fletcher is forced to eat "humble pie" — a rich chocolate concoction appropriately called Dump Cake — it leaves "fecal smears of icing around his mouth." Yum.

Shriver's long residence abroad leads to several Briticisms incongruous in a novel narrated by an Iowan: "fiddly scraps from the food processor," "toilet roll" instead of toilet paper, "verges" for road shoulders, a "slimmer" instead of a dieter. More jarring is Edison's unconvincing jive talk, peppered with "You dig?"

As for the larger question of whether Pandora would allow her brother to swallow her life whole, I can assure you, without giving away too much, that Shriver manages to redeem this cockamamie scenario in the end.

Replete with discussions of the unfortunate "association of physique with vice and virtue" and the ludicrous plethora of gimmicky weight-loss diets, Shriver's novel champions not fat pride but compassion for the corpulent. Yet its not-so-subtle bias toward the slim and disciplined is evident, from the jokey pledge of allegiance that begins, "I pledge aversion to the flab / Of the derided waists of America ..." to Pandora's highly debatable assertion that "However gnawing a deficiency, satiety is worse ... We are meant to be hungry."

In other words, there's plenty to chew on in Big Brother.