Accessibility links
Kitchen Window: We All Scream For Ice Cream Every culture loves its ice cream, or the frozen treat that stands in for it. From Mexican paletas to Indian kulfi, flavors like avocado, cardamom, berries and more infuse these cool treats.

We All Scream For Ice Cream

We All Scream For Ice Cream 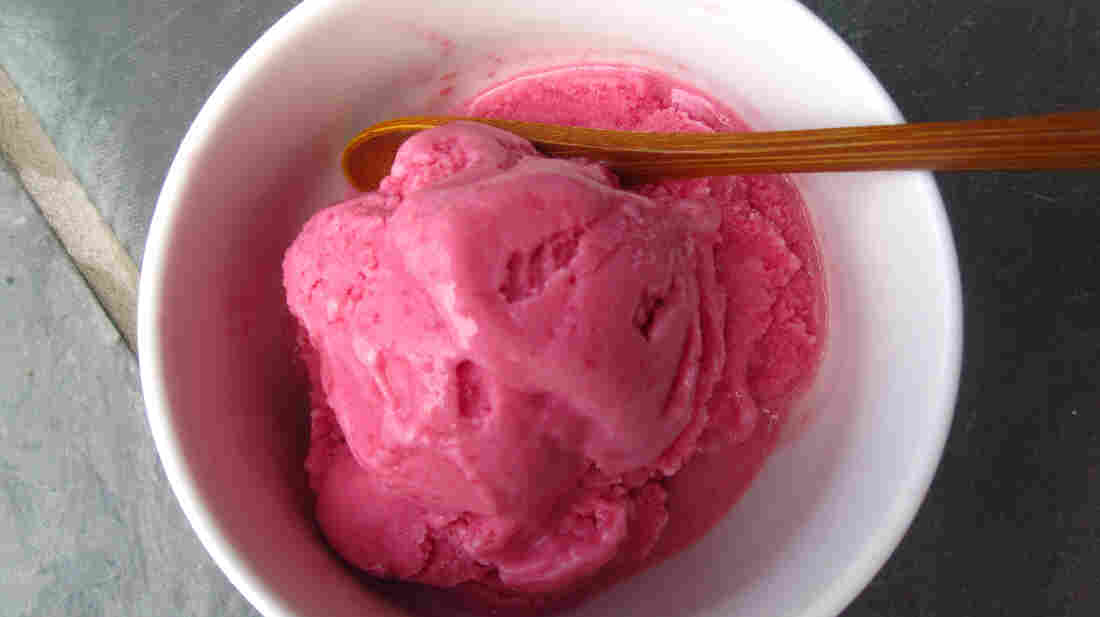 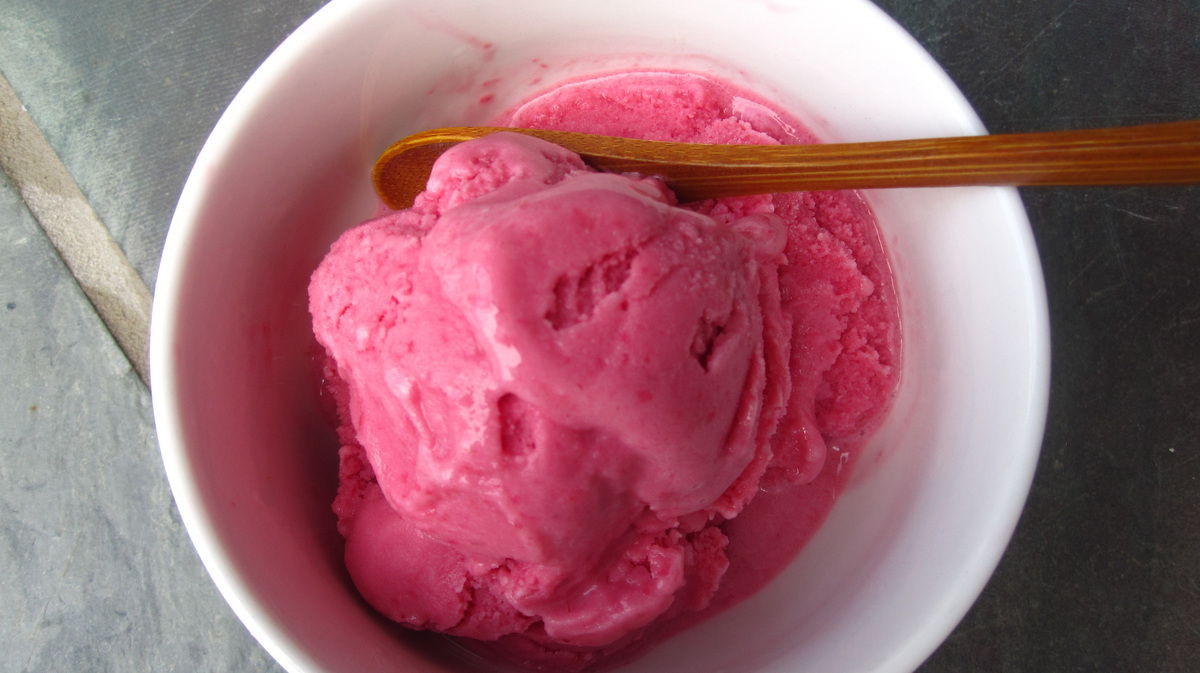 My husband's cousin, Milind, stops the car alongside Mumbai's famous Chowpatty Beach, and I think it's because we're going to take in the scene: the cavorting clowns, the camels, the balloon sellers, the people thronging the sand as though it's noon instead of midnight. I begin walking toward the beach, but Milind pulls me in the other direction. Toward the New Kulfi Center.

"Milind, please," I moan. The ice cream stand is just the latest stop on an hours-long eating odyssey that took us from street food to a juice shop to grilled cheese.

"Tsk," Milind clicks with the characteristic Indian head wobble that means stop being silly. "It's just a little kulfi."

Kulfi is India's ice cream. ... It is dense and creamy, and defined by the caramelized taste the milk gets when it is slowly cooked down. I can eat it by the gallon. Which, despite my protestations, I did that night with Milind.

Kulfi is India's ice cream, a confection of condensed milk, sugar and flavorings that run from saffron to sitaful, or custard apple. It is dense and creamy, and defined by the caramelized taste the milk gets when it is slowly cooked down. I can eat it by the gallon. Which, despite my protestations, I did that night with Milind.

In Russia, I sampled thick slabs of mouth-coating morozhenoe hacked off a block from a pushcart. In pre-civil war Damascus, Syria, my uncle and I slurped quickly melting cones of fresh pistachio ice cream while families cruised the avenue in vintage American cars, rolling down their windows to receive their orders of rose-flavored, cashew or pomegranate ice cream. In Hawaii, shave ice anchored by sweet azuki beans put the exclamation point on every episode of body-boarding.

Every culture loves its ice cream, or the frozen treat that stands in for it. Koreans have bingsoo, an elaborate shave ice often heaped with fruit, flavored jellies, condensed milk and sometimes even ice cream. The Filipino version, called halo-halo, often pairs the ice with sweet palm fruit, mung beans or even purple yams and corn. Mexicans devour paletas, pops made of coconut, berries, avocado. In Italy, gelato showcases chocolate, espresso and fruit flavors by using mostly milk, not cream, which can flatten flavors with its fat. Even Eskimos have ice cream, a concoction of lard, fish, sugar and berries called akutaq (OK, it's not frozen, but it's still called "ice cream").

Michele Kayal is the assistant managing editor of American Food Roots, a site celebrating the culture and diversity of American food. She is a also a regular contributor to The Associated Press. Her work has appeared in The New York Times, the late great Gourmet, Bon Appetit, Conde Nast Traveler and many other national outlets.

The origins of ice cream are, like most food history, unclear. Persians, Mexicans, Chinese and other cultures all claim to have sent people up the proverbial mountain thousands of years ago to get snow that was then flavored with sugar, berries, rice or other local ingredients. But no one could make ice cream until Italy developed freezing technology in the 16th century, according to Of Sugar and Snow: A History of Ice Cream Making by Jeri Quinzio (University of California Press, 2009). France quickly took over, Quinzio writes, setting the standards for ice cream in the 17th and 18th centuries and producing the first book completely dedicated to ice cream.

Ice cream also was popular in America, where the first ice cream parlor opened in New York City in the late 1700s. In 1843, the first hand-cranked ice cream machine was invented by a woman named Nancy Johnson (who is said to have been from Philadelphia, New Jersey or New England, depending on which source you consult). But cranking was labor intensive — and in need of a steady supply of ice — so ice cream remained a special-occasion treat until the advent of mass refrigeration and industrialized ice cream makers in the early 20th century.

But as the Pulitzer Prize-winning playwright and novelist Thornton Wilder said, "My advice to you is not to inquire why or whither, but just enjoy your ice cream while it's on your plate."

It's good advice. And though Wilder may have been famous, I didn't learn it from him. I learned it that night in Mumbai, from Milind.

While Americans expect to find avocado in salads and spicy dips, it actually is a fruit and is treated as such throughout Latin America. Its creamy texture and fattiness make it a perfect base for smoothies and ice cream. And for those who are vegan or lactose-intolerant, these treats are most often dairy-free. These avocado pops might sound unusual, but give them a try. An entire continent can't be wrong. This recipe is adapted from Paletas: Authentic recipes for Mexican Ice Pops, Shaved Ice and Aguas Frescas by Fany Gerson (Ten Speed Press, 2011). Note that you don't need ice-pop molds to make this recipe. 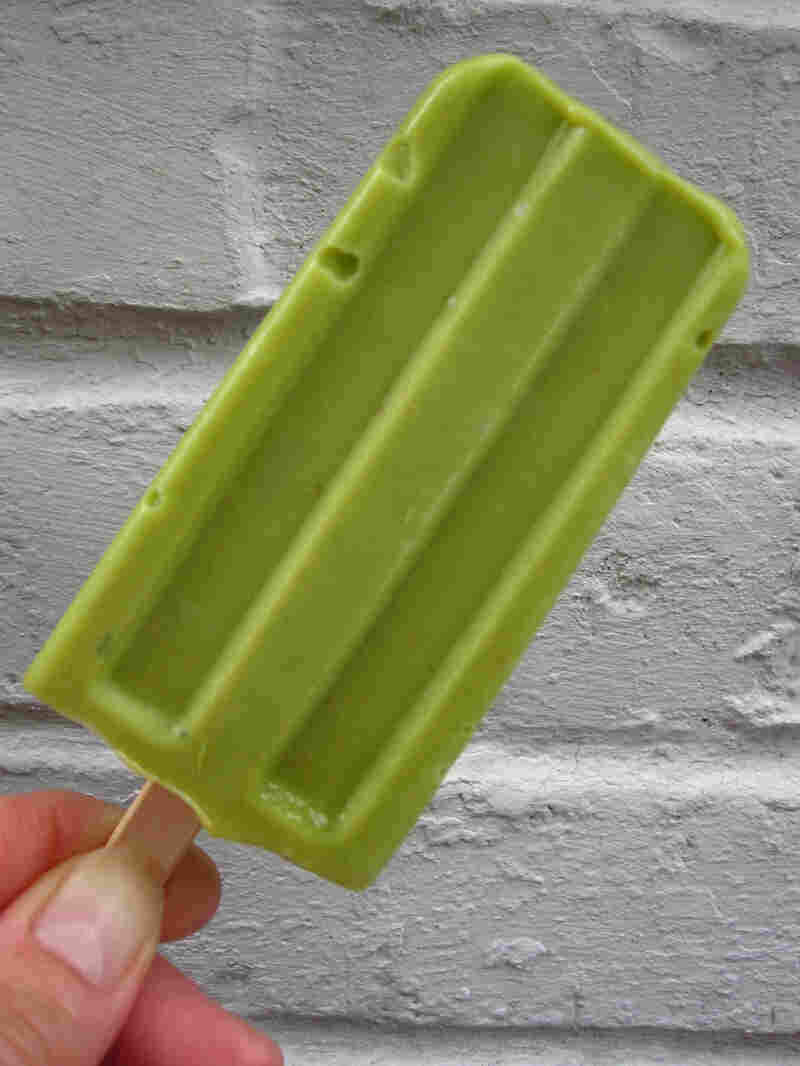 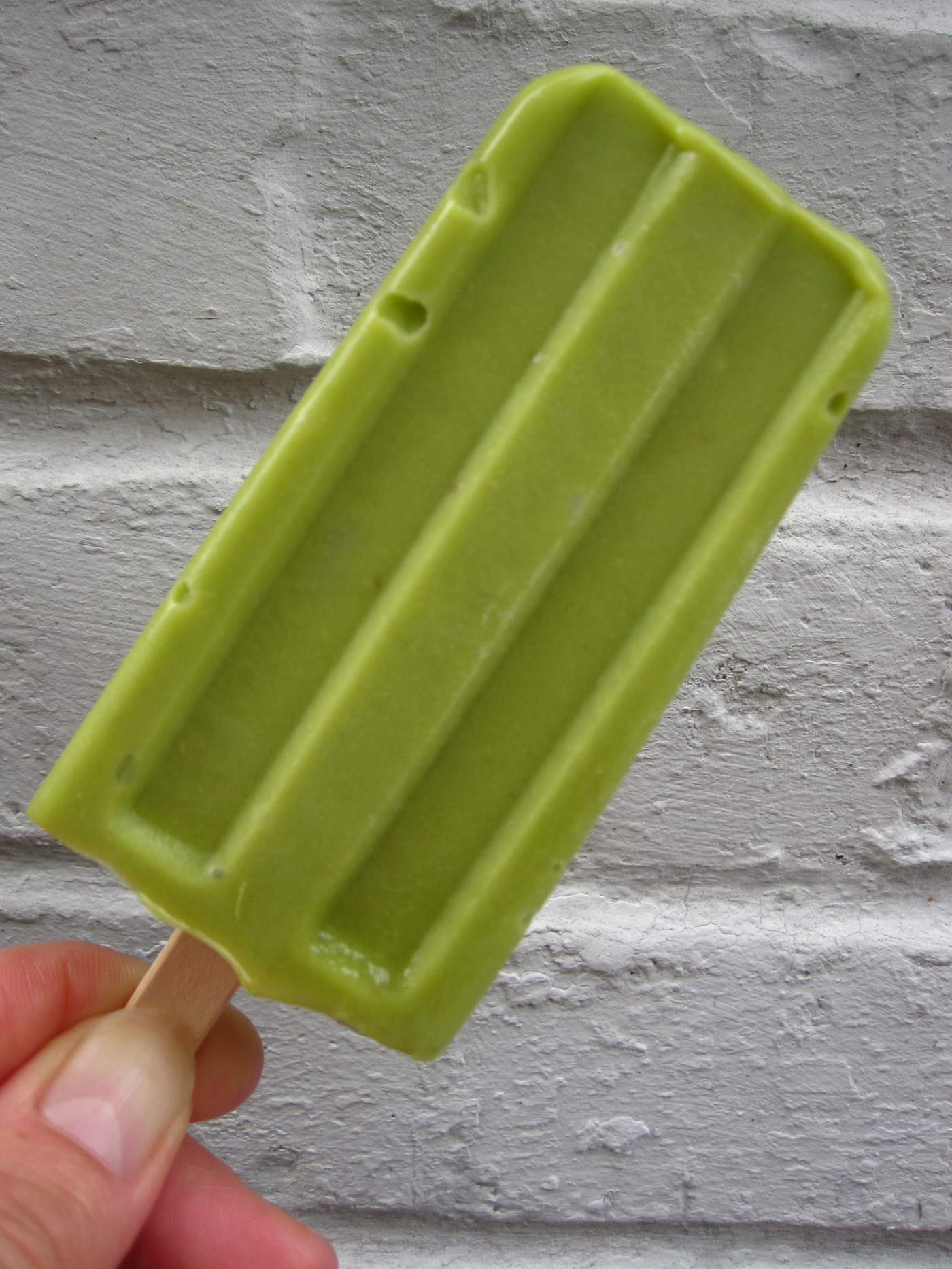 Combine the water and sugar in a small saucepan and cook over medium-high heat, stirring, until the mixture comes to a boil and the sugar is dissolved. Let cool to room temperature.

Cut the avocados in half lengthwise. Remove the pit and scoop the flesh into a blender or food processor, along with the cooled syrup and salt. Blend until smooth, scraping the sides as needed. Add the lime juice and blend just until combined.

I love this recipe because it's quick and easy and lets you really highlight all the great berries and fruits of summer. Adapted from The Perfect Scoop by David Lebovitz (Ten Speed Press, 2007), the sweet-tangy base of this ice cream provides a more interesting foundation than vanilla for blueberry, strawberry, raspberry and other flavors. Wherever it reads "blueberry," go ahead and substitute whatever looks gorgeous at the farmers market. 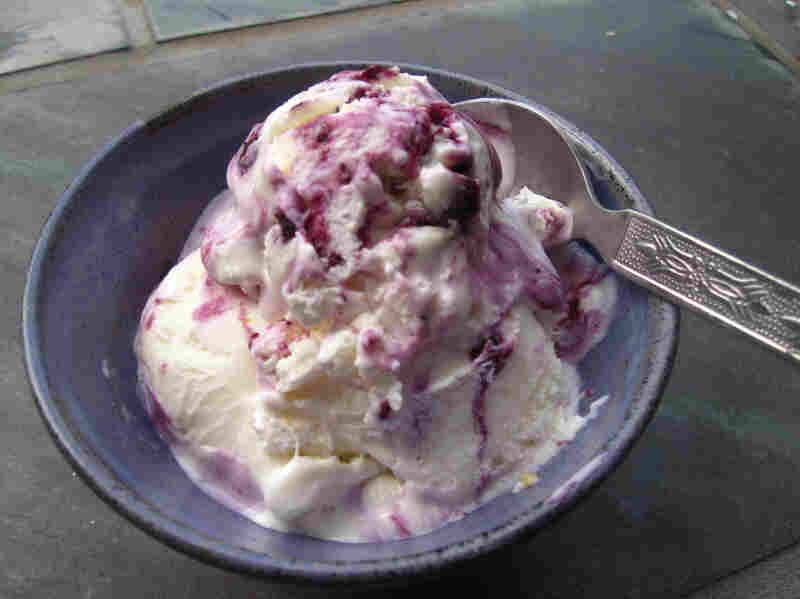 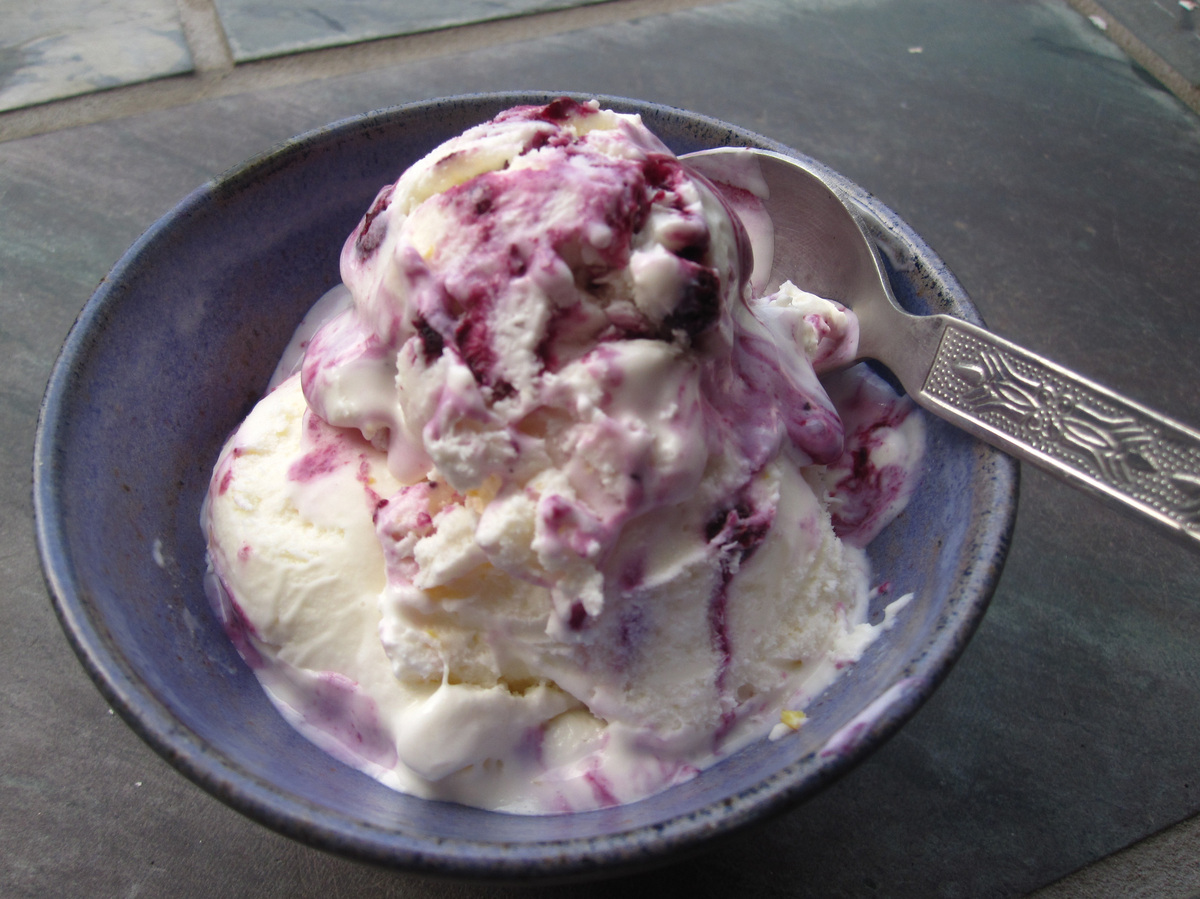 To make the ice cream base, cut the cream cheese into small pieces. Zest the lemon directly into a blender or food processor, then add the cream cheese, sour cream, half-and-half, sugar and salt. Puree until smooth.

Place the mixture in the refrigerator to chill.

While the ice cream mixture is chilling, make the swirl.

In a medium, nonreactive saucepan, heat the blueberries and sugar until the berries begin to release their juices. Mix the cornstarch with the cold water and lemon juice until lump-free. Stir the slurry into the blueberries.

Bring to a boil, then reduce the heat to a simmer and cook for 1 minute. Remove from the heat and stir in the kirsch, if using. Place in the refrigerator to chill.

*If you're using other berries, experiment with liqueurs — maybe Grand Marnier for raspberries, vodka or creme de cacao for strawberries.

Raspberries are one of summer's great gifts, and if you can capture the flavor while ditching the seeds, so much the better. Tart-sweet, cold and refreshing, frozen yogurt is one of the best uses for them. This recipe is adapted from The Perfect Scoop by David Lebovitz (Ten Speed Press, 2007). 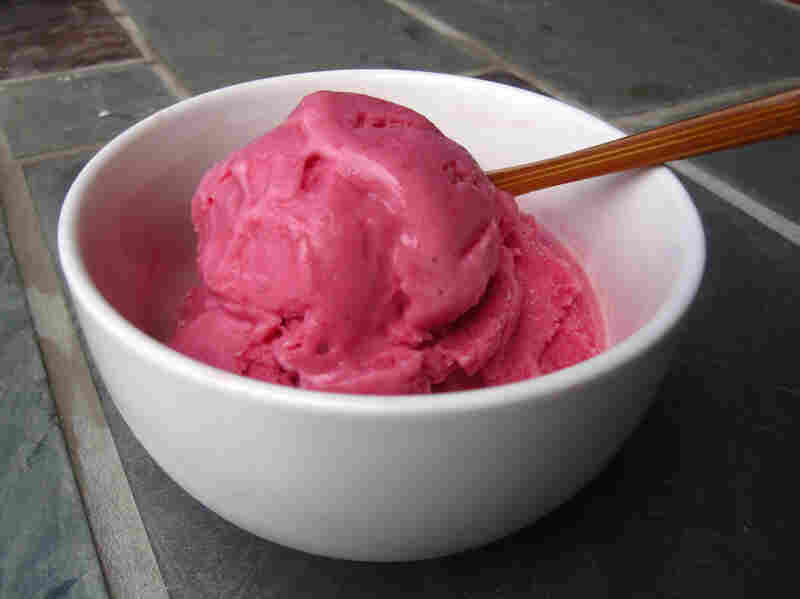 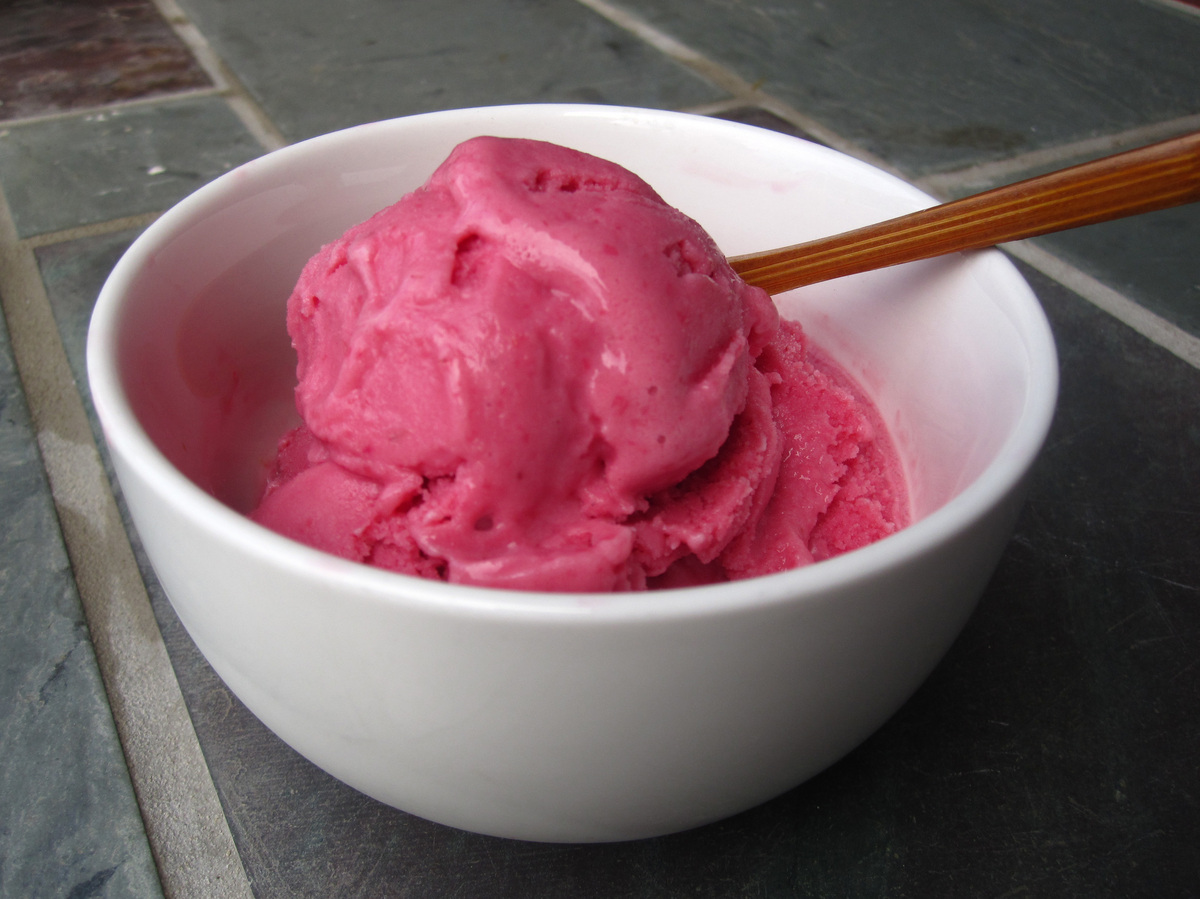 In a blender or food processor, puree the yogurt, sugar, berries and lemon juice. Press the mixture through a strainer to remove the seeds. Chill for 1 hour.

Freeze in your ice cream maker according to the manufacturer's instructions.

In my mind, this extremely cool discovery harkens back to those days when emperors combined snow and sugar, and discovered other items that were sweet, cold treats. Adapted from the popular cooking site The Kitchn, this one-ingredient ice cream consists of a frozen banana blitzed into oblivion in a high-powered blender. The whipping yields a smooth, creamy, utterly delicious base that can be flavored with items such as peanut butter, chocolate, caramel and anything else you can think of. Finally, ice cream you can eat for breakfast. 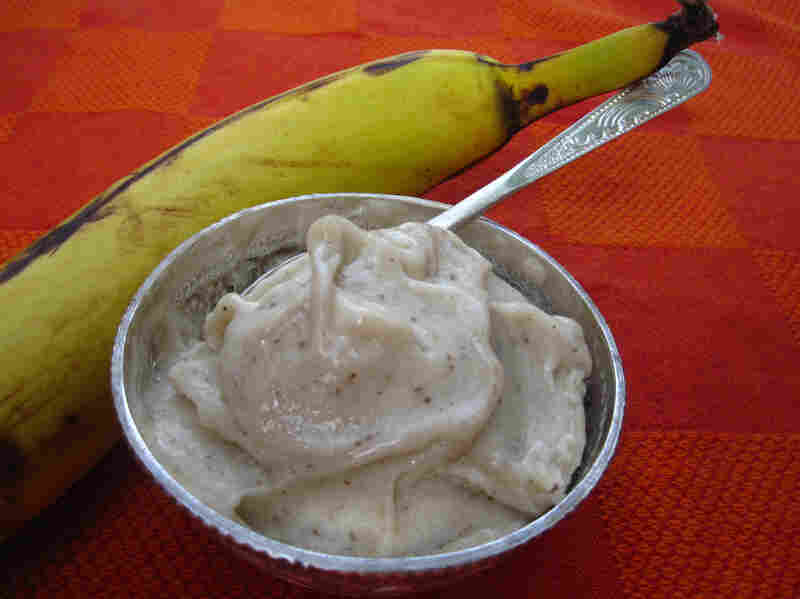 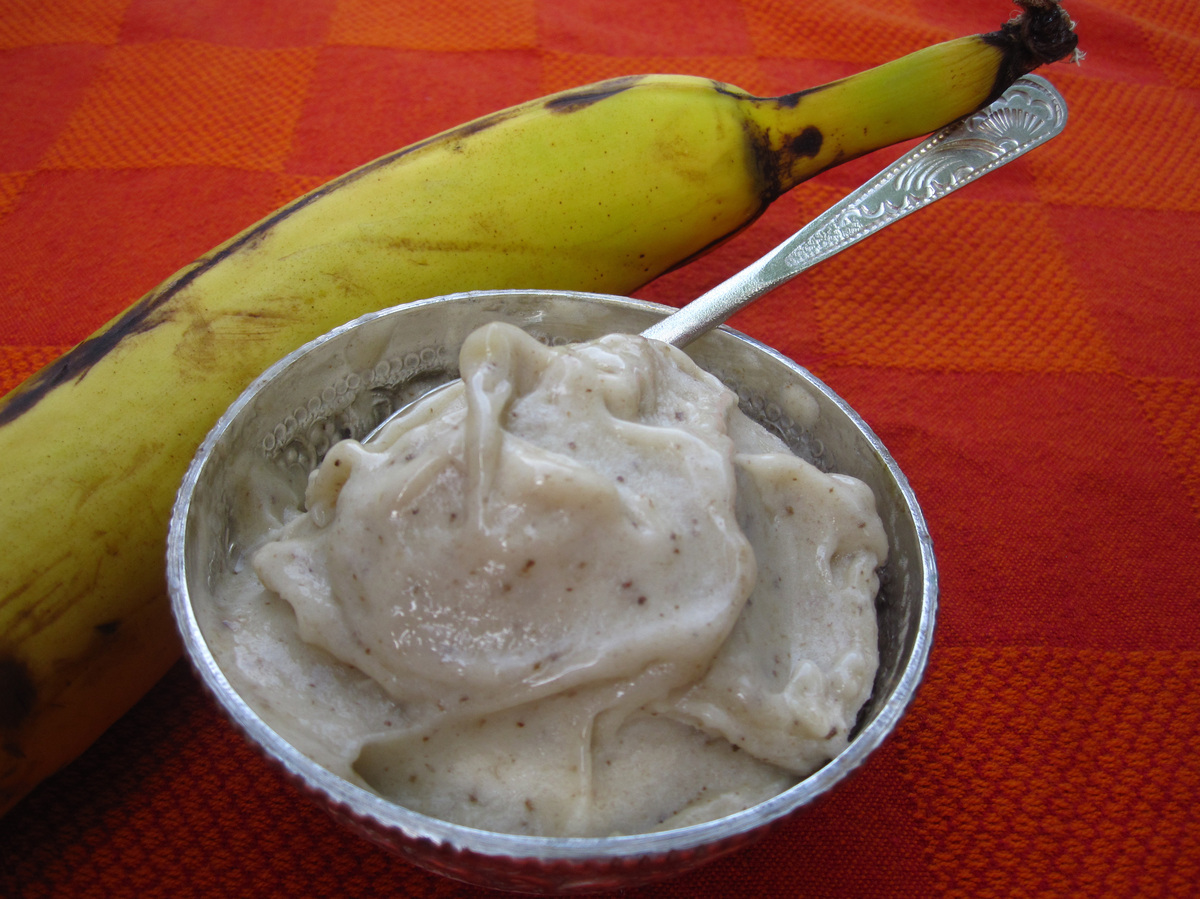 Cut the banana into coins and freeze until hard, about 2 hours. Put the coins into a high-powered blender or food processor. Blend at highest speed, scraping down the sides often. When the mixture resembles cake batter, it's ready to eat as a soft-serve style. For a harder ice cream, put the mixture in an airtight container and freeze for an hour or two.

For each banana, add 1 1/2 tablespoons of peanut butter to the blender. Follow the same process.

Traditional kulfi offers lovely flavor combinations — pistachios, saffron, sometimes dried fruit such as dates and figs (my favorite) — but the thing that really sets it apart is the caramelized flavor that the milk takes on from its long cooking. Getting the milk to that point, however, is fraught with pitfalls. It sometimes boils over (if, like me, you don't watch it every minute) or it goes too long and gets gooey. It seemed the slow cooker was the perfect solution. Credit on this one goes mainly to my husband, Satu, who is lactose intolerant and was therefore highly motivated to make his own kulfi using lactose-free milk. Regular milk works just as well. We usually pour it into ice-pop molds, which is common in India, but it can also be frozen in an airtight container. 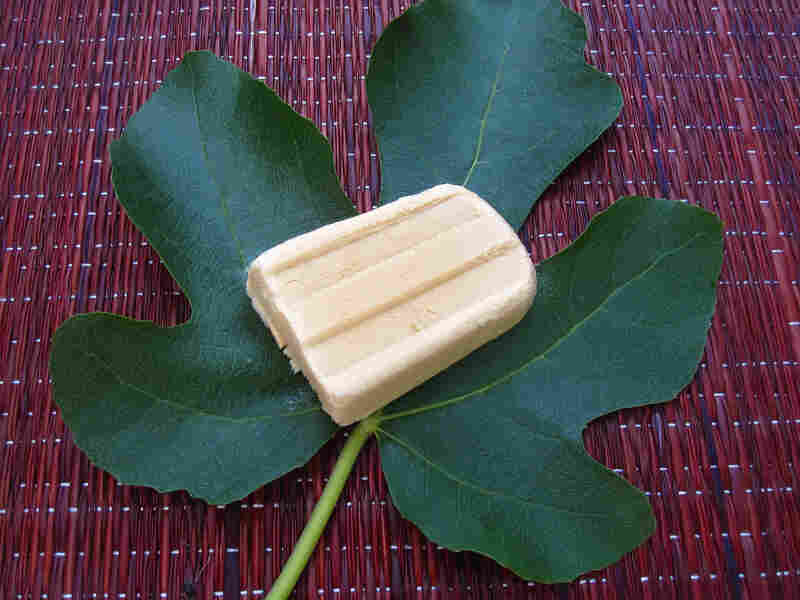 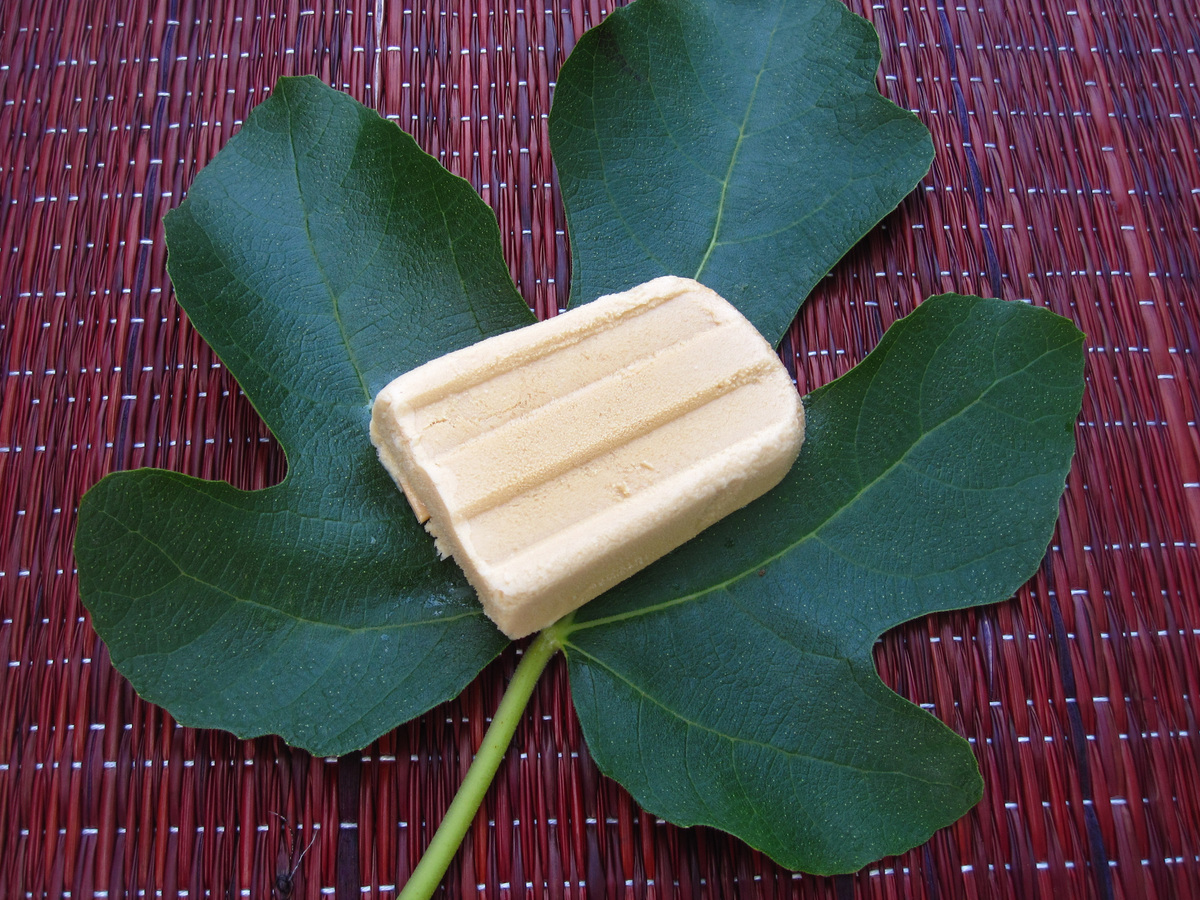 Once you've mastered this basic recipe, try adding other flavors, such as pistachios (ground and whole) and dried fruit.

In a large, heavy-bottomed pot, combine all the ingredients. Bring to a boil over medium-high heat, stirring constantly. Reduce heat and simmer the milk for 15 minutes to release the flavor in the spices.

Transfer mixture to slow cooker. Set cooker to "high" and cook for 8 hours, uncovered. If the cover is left on, evaporation will not take place and the milk will not condense. Stir occasionally, incorporating the milk skin back into the liquid.

At the end of 8 hours, the milk should be reduced to about half. Strain the mixture into a bowl to remove the cardamom pods and any remaining milk skin.

Pour the strained mixture into molds or into an airtight container. Refrigerate until firm, at least 5 to 7 hours.

Plain Vanilla No More: Ice Cream To Swoon For