Accessibility links
Resisting The Temptation To 'Win' When Investing Some financial experts say the fees charged by actively managed mutual funds are not worth it. Over the long haul, they could cost a retirement account tens of thousands of dollars. So NPR's Uri Berliner explores funds that have minimal expenses. 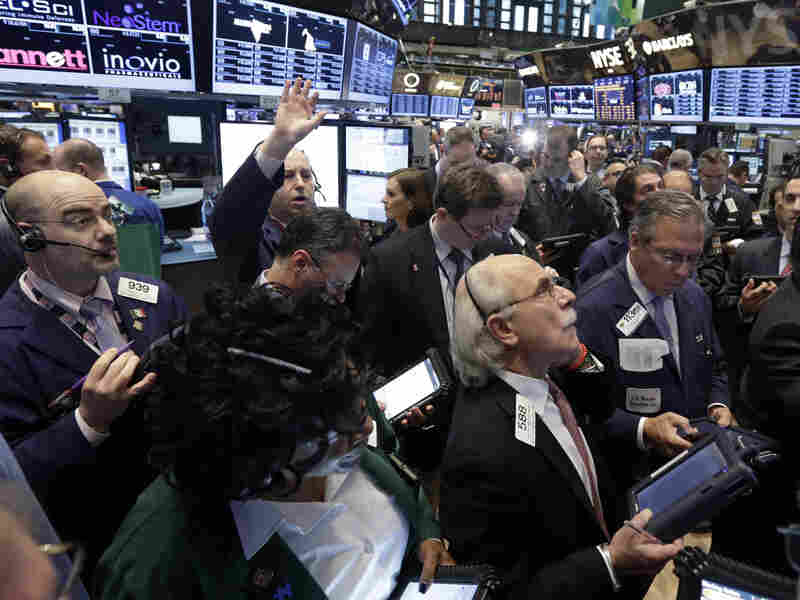 Hey mutual fund investors: Think you can beat the market? Charley Ellis, who's worked in investment management for 50 years, doubts it. That's because the fees actively managed funds charge can get expensive. Richard Drew/AP hide caption 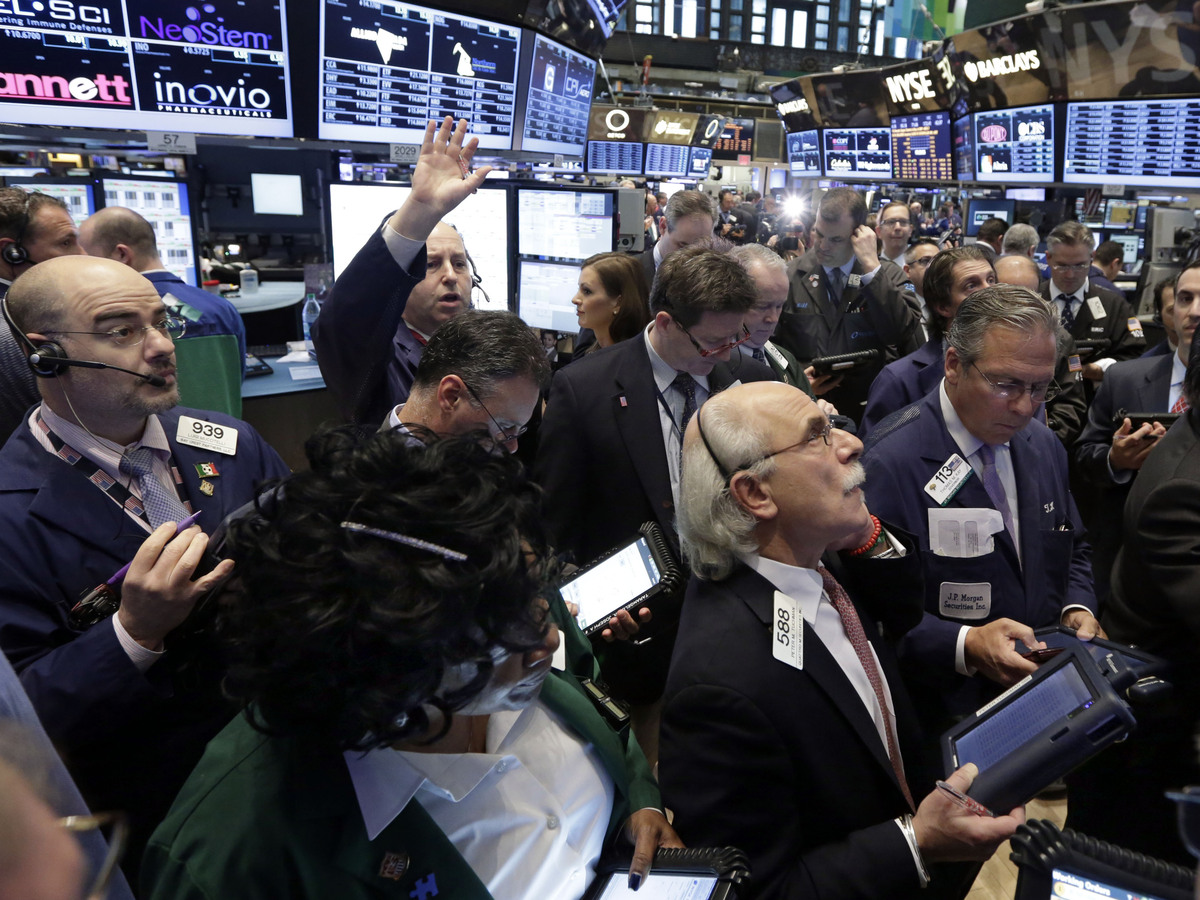 Hey mutual fund investors: Think you can beat the market? Charley Ellis, who's worked in investment management for 50 years, doubts it. That's because the fees actively managed funds charge can get expensive.

The Cost Of Mutual Fund Fees

Here's what happens after 20 years to a $100,000 investment with a 6 percent annual return and an annual fee (expense ratio) of 1 percent.

For the same investment with an annual fee of .10 percent:

Calculate: Click here to estimate how fees affect your investments.

NPR's Uri Berliner is taking $5,000 of his own savings and putting it to work. Though he's no financial whiz or guru, he's exploring different types of investments — alternatives that may fare better than staying in a savings account that's not keeping up with inflation.

Deciding how to invest in the stock market can be daunting. That's why I called on someone who's seen it all. Charley Ellis founded Greenwich Associates, a research and consulting firm, and wrote an influential investing book called Winning the Loser's Game. He worked in investment management for 50 years. His advice: Don't fear being boring. Embrace boring if you can. Passive is better than active.

"Most of the people who are trying harder are actually hurting themselves," he says.

When Americans invest in the stock market, it's usually through mutual funds. There are two varieties: actively traded funds, where an investment manager and his team try to pick winning stocks, and index funds, which passively mimic a benchmark like the S&P 500. Ellis says those actively traded funds are a bad bet.

"Candidly, the data's very disturbing. Comfortably more than half [of funds] over any reasonable 12-month period fall short of the target they choose for themselves," he says. But if you say a year is not long enough, over 10 years it rises to 70 percent. "While the data gets pretty thin, by the time you get it out to 20 years, it gets even worse. ... Somewhere around 80 percent fall short," he says.

For Ellis, this is a crucial point. A significant majority of funds that rely on managers to make trades do worse than passive index funds. And those active funds that happen to shine for a few years, you can't be sure they'll do it again in the future. The Warren Buffetts of the world are rare, and I'm not one of them. That's why Ellis is telling me not to try to beat the market.

"It's not that you can't," he says. "It's that you won't." The odds, he says, are stacked against me. The stacking comes from something called the expense ratio. It's the annual fee the fund charges you for the manager's salary and various administrative costs.

The Perils Of High Fees

"People pay way too much attention to past returns and way too little attention to the fees," says Terrance Odean, a finance professor at the University of California, Berkeley, Haas School of Business. While fees for actively managed funds have been coming down, they still charge almost 1 percent a year on average. Average fees for index funds are much more modest — just over one-tenth of a percent. Over the long haul, in a retirement account those higher fees can cost an investor tens of thousands of dollars.

"One thing about fees is [that] high fees this year almost always means high fees next year," Odean says. "In fact, you know what your fees are going to be next year. But high performance this year doesn't really tell you much about next year's performance."

So that must mean that most investors seek out lower-cost index funds to avoid those fees, right? Actually, they don't. There's more than six times as much invested in actively managed funds, some $9.8 trillion, according to the Investment Company Institute.

I wanted to find out why those numbers are lopsided in favor of higher-cost funds. Brian Smith is a spokesman for the Mutual Fund Education Alliance, an industry trade group. When I asked him to make the case for actively managed funds, he said they give investors a chance to beat the market. "People want to build wealth over time; they want to build their futures. And to do that, you need a diversified plan, which is across the spectrum of different areas of the investing marketplace. That's where an active manager can make a big difference."

Ellis says that may be true — but probably not. He says instead many investors are tempted by company marketing and media coverage that focuses on hot streaks. "And so you have the feeling that, 'Oh, come on, people are winning,' " Ellis says. " 'In every other part of my life I've always played to win. Let me just get the right fund or the right manager, and I'm going to be a winner.' "

Finally — and this is where the psychology comes in — lots of people who study financial behavior say we're just too confident in our ability to spot good investments.

"Life feels better to the extent you have this belief that things are going to be better than reality suggests," says Max Bazerman, a professor at the Harvard Business School and the Harvard Kennedy School. Bazerman studies human blind spots and decision-making. He calls this overconfident frame of mind "motivated bias." And he says it can be helpful in pushing us to reach a goal, say in sports or landing a new job or even fighting an illness — but not when it comes to investing.

When I'm at that moment of decision — ready to pull the trigger on my investment in the stock market — I'm still tempted to try to beat the market despite everything I've heard. So I ask Bazerman to talk me out of it.

"So I would ask you to think about why do you think you can outperform the market realizing that if you pay an extra percent a year on your investment for the next 20 years, you're giving up 20 percent?"

That's a ballpark estimate. The percentage would be a bit more or a bit less depending on your rate of return. But over the years it still adds up to a huge amount going to fees. It's so big that when I finally decide to buy, I look for someone who knows how to find a bargain.

Miranda Marquit is a personal finance blogger. She developed a grudge against high fees after winding up in some expensive funds when she was younger.

We go shopping together online for exchange-traded funds, or ETFs. They're similar to mutual funds. We're hunting for diversification and minimal expenses. She's checking out low-cost funds.

"The very top fund on the list, the U.S. Large Cap, has an expense ratio of .04 percent," Marquit says. "That's really low." We also look at a bunch of other funds, including an international fund for some geographical balance.

In the end, I spend $749 on a broad U.S. stock fund, $652.34 on a global fund and $577.44 on a stock fund that pays out regular dividends. I've got diversification in stocks, and the fees are low. It's a boring portfolio — really boring. But that's the point. I'll have to find my thrills elsewhere.