Accessibility links
Tiny, Ancient Tree-Dweller Was One Of Earth's Earliest Primates About 55 million years ago, a teacup-sized critter in China was helping to pave the way for apes and humans. This insect eater had fingernails and stereo vision, a newly published analysis of a fossil suggests. And it weighed just 1 ounce. 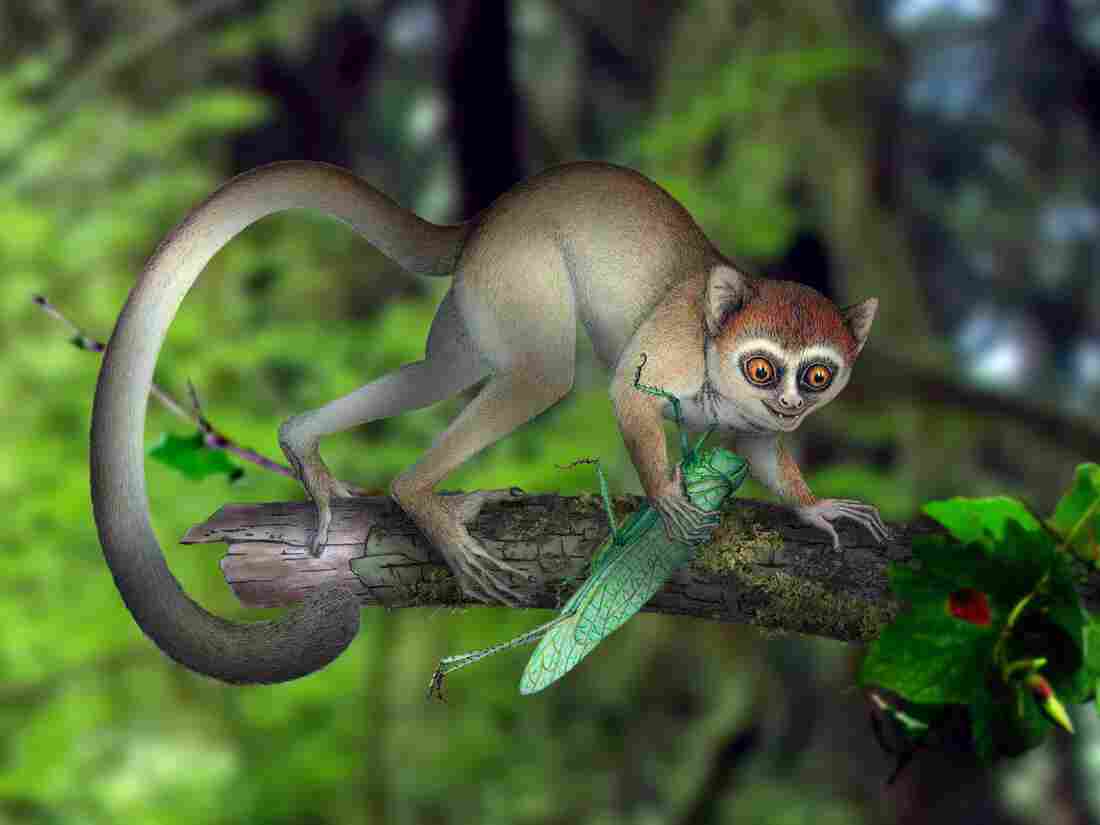 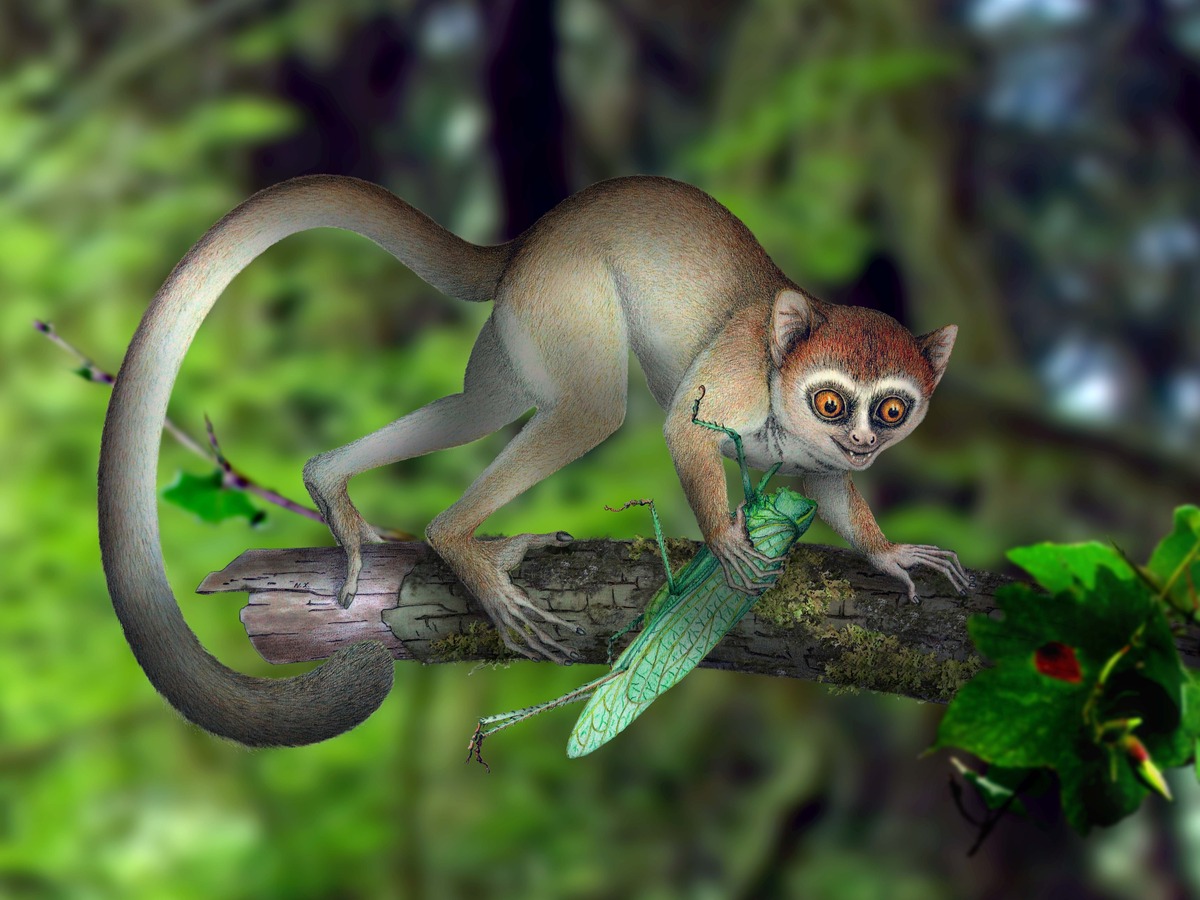 Artistic reconstruction of Archicebus achilles in its natural habitat of trees.

The origin of the first primates — the group that includes humans, apes and monkeys — is thought to lie in the deep past, about 55 million years ago.

Fossils from that period are rare. But now, there's an exciting new one. It's called Archicebus achilles, roughly meaning "beginning long-tailed monkey." Actually, this creature lived before the monkeys we know of today, a mere 10 million years after the dinosaurs died out.

But A. achilles had some primitive features we associate with monkeys and the rest of the primates. For example, it had big eye sockets that were forward-facing and angled in a way that meant the animal had good stereo vision. It also had nails instead of claws, indicative of grasping digits. Many of its traits would have been helpful for living in trees and, perhaps, capturing insects.

"It's a fossil that shows a combination of features that we've simply never seen before in any living or fossil primate," says Christopher Beard, a paleontologist with the Carnegie Museum of Natural History, in Pittsburgh, who worked on the team that analyzed it.

The fossil was discovered years ago by a farmer in China. Alive, A. achilles weighed an ounce and would fit in the palm of your hand. The scientific team spent several years studying it before publishing their findings in the journal Nature this week.

The skeleton's completeness, and its great age, are extraordinary. A. achilles lived at a special time in evolution. The first primates were emerging and over time, they would evolve and diverge into numerous body types and behaviors. Some became monkeys; some, lemurs; and others, creatures called tarsiers. And some would eventually evolve into us — Homo sapiens. 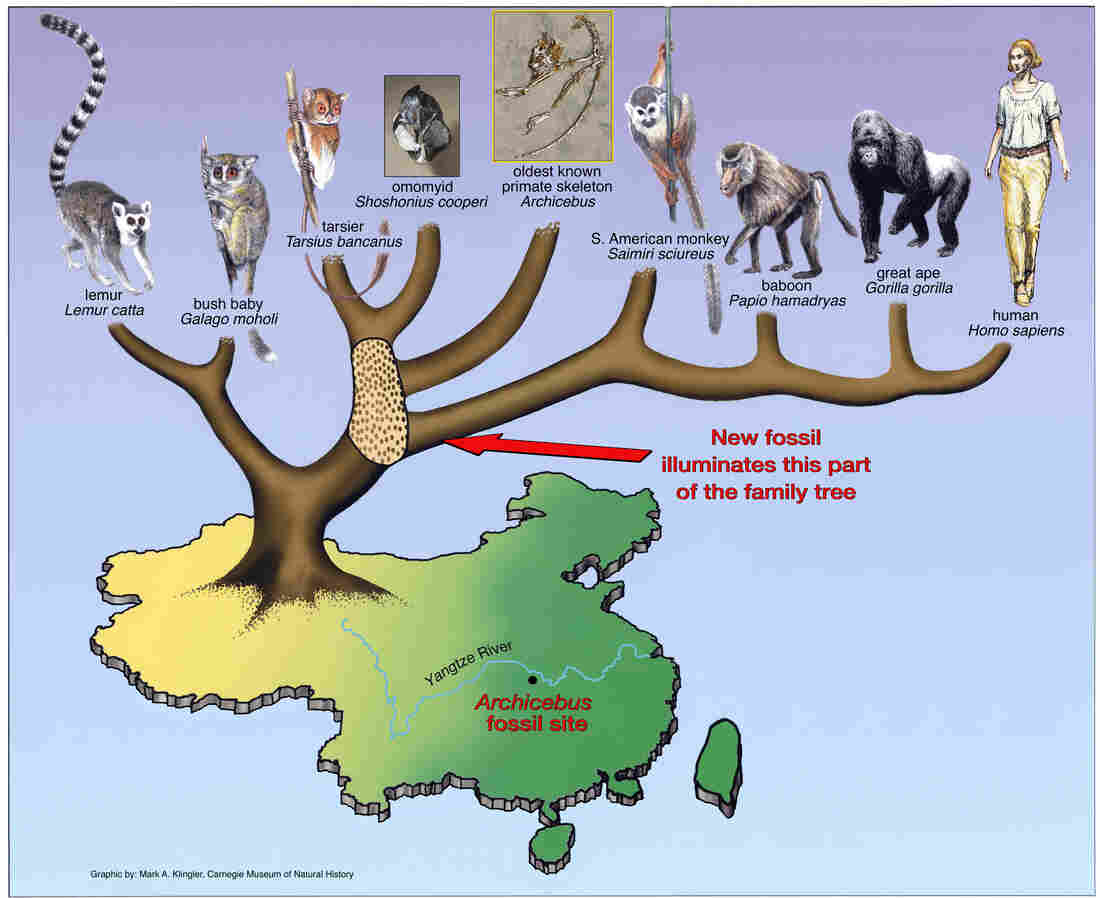 Scientists think the lineage of the Archicebus achilles was very close to the diverging branch leading to humans. Mark A. Klingler/Carnegie Museum hide caption

Beard says the lineage A. achilles was on may not have been the same one humans came from. "But in any case, the take-home picture should be that here is a fossil that is very, very close to that evolutionary divergence," Beard concludes. And apparently, that divergence happened in Asia.

The scientists say A. achilles may be the earliest primate skeleton ever found. Duke University anthropologist Richard Kay says that's possible, but the fossil record in this case is murky. Some other primate fossils might qualify, he says, although they are very fragmentary and the dates are very close together, clustered around 55 million years ago. In any case, A. achilles was certainly close kin to the first primate and could help answer some crucial questions, Kay and Beard agree.

"Why did this group of animals get really well-developed vision?" Kay asks. "Why did they get rid of perfectly good claws and start to have nails on their fingers, and a lot of other characteristics? They beg an answer as to, why did this change occur?"