Accessibility links
Movie Review - 'Dirty Wars' - Covert Conflicts Decried Onscreen Jeremy Scahill, author of the New York Times best-seller Blackwater, contemplates what he considers the "dirty" side of America's wars. But it's what he doesn't ask — or answer — in his documentary's 90-minute narrative that's really thought-provoking. 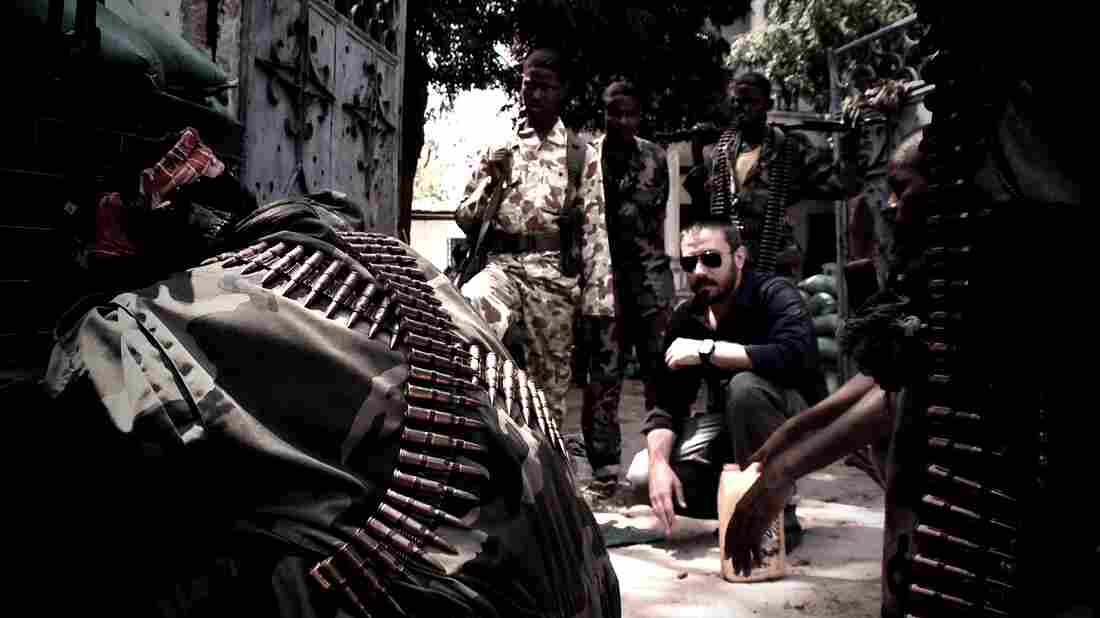 Reporter and author Jeremy Scahill, shown in Somalia, visited a range of conflict-plagued areas for the film Dirty Wars, an outgrowth of his writing on American anti-terrorism efforts abroad. IFC hide caption

After the killing of Osama bin Laden in May 2011, the soldiers of the paramilitary force JSOC (Joint Special Operations Command) who carried out the operation were lionized as national heroes.

They earned more ambivalent treatment in Kathryn Bigelow's Zero Dark Thirty. And according to Dirty Wars, a documentary based on a book by investigative reporter Jeremy Scahill, their shadowy outfit has pretty much taken over America's global war on terrorism — and in flagrantly unconstitutional ways, he claims.

Founded in 1980, JSOC has deployed its crack units to carry out night raids, drone strikes and targeted assassinations, while also outsourcing some of its work to warlords in Africa, Asia and the Middle East — in wars declared and undeclared. Worse, in Scahill's view, they do this without oversight, and with the tacit and/or active collaboration of NATO, the White House, Congress and the U.S. military's top brass.

Scahill, who covers national security for the left-leaning Nation magazine and who has also written a book about the controversial security firm Blackwater, stumbled on JSOC while digging into the murders of an American-trained police commander and several members of his family — two were pregnant women — in the city of Gardez in Afghanistan. From there he worked his way through Iraq, Yemen and Somalia, documenting evidence of undercover JSOC operations to root out al-Qaida terrorists.

The film details Scahill's efforts to bring all this to the attention of Congress, the Army and the media, efforts that met with stonewalling, denials or dismissals of civilian casualties as "collateral damage."

Perhaps fearing that Dirty Wars would get lost in the flood of documentaries probing American involvement in foreign wars since the invasion of Iraq, Scahill and director Rick Rowley upped the ante by casting their story as a real-life thriller, complete with an ill-considered sidebar detailing the effect of his experiences on Scahill's psyche.

They've jazzed up their verite footage with a grainy shooting style and a plaintive score from the Kronos Quartet. They brought in fiction screenwriter David Riker (La Ciudad, The Girl) to pep up Scahill's narration, which is laden with clipped three-word sentences and flights of poetic rhetoric. ("Our car felt thin-skinned and fragile," he tells us while on an excursion into a terrorist stronghold.)

The action is heavily larded with stagey shots of Scahill shopping lethargically at a supermarket back home in Brooklyn, where life had come to seem "too ordinary"; listening gravely to victims' relatives; holding hands with a Yemeni tribesman who's showing him around a devastated strike site littered with signs of an American military presence. Returning to Yemen at the end, he wonders whether he's come for more data, or to apologize on behalf of his country.

Scarred he may be, but as a journalist Scahill is surely the messenger, not the subject, and the attention he receives in Dirty Wars distracts us from the bigger picture he paints. The film's larger argument is that, invited or not, America increasingly fights its global wars (in an estimated 75 countries, many of which, like Yemen, are not officially at war) in secret and without checks or balances. This, Scahill argues, has created a self-fulfilling prophecy of conflict without end, in which no country is off-limits.

Given the recent revelations about secret American drone strikes, Dirty Wars is certainly timely. Scahill's trump card is the case of Anwar al-Awlaki, an American cleric who left the United States for Yemen, where he became a hugely influential jihadist mouthpiece for violent attacks against the United States. The first American citizen to be placed on a kill list by President Obama, Awlaki was killed in a drone strike in 2011, as was his 16-year-old son a few weeks later.

This last is appalling, and Awlaki's son was probably — though not certainly, given that Scahill takes family testimony on trust, while presuming that American authorities must be lying or fudging the truth — an unwarranted casualty.

But Scahill goes on to argue, far more controversially, that the late cleric's militancy was a direct result of American overkill and hostility toward Islam. Indeed, as we watch footage of Scahill and surviving relatives gazing sadly at home movies of the family, Awlaki comes close to being portrayed as an innocent victim.

Scahill is right to focus on the price American security efforts have cost in human rights — and human life. Yet there are difficult questions hovering just outside the frame of Dirty Wars. Short of pacifism, and given that there is no such thing as a truly clean war, what would count as an "acceptable" level of collateral damage?

And in an age when terrorist cells and wild-card loners with grudges strike fear in one corner of the world, then vanish only to pop up in another, what might count as morally acceptable counterterrorism?