Accessibility links
First U.S. Assembly Plant For China's Lenovo Opens In N.C. The Chinese computer maker is trying to boost its brand and U.S. market share as other high-tech firms, including Motorola, plan to manufacture here. North Carolina officials say the plant in Whitsett is a sign of manufacturing's return from overseas. 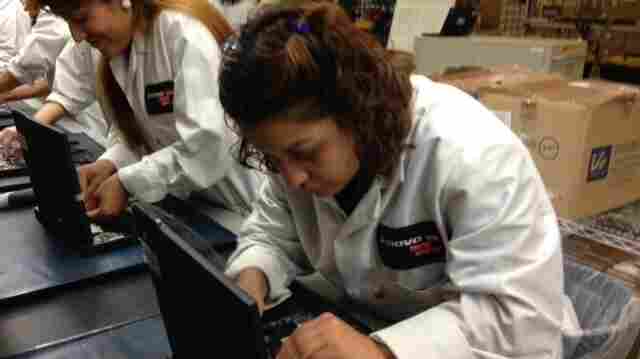 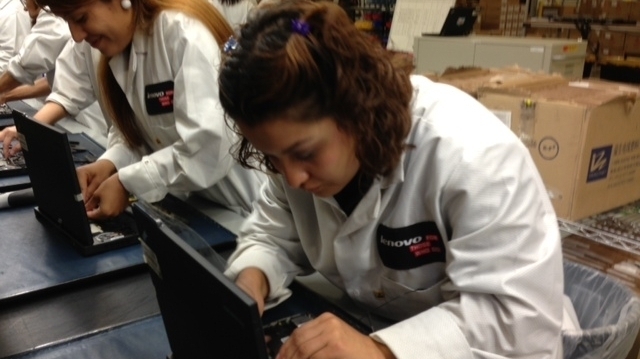 Chinese computer maker Lenovo celebrated the opening of its first U.S. manufacturing plant in Whitsett, N.C., on Wednesday. The company is trying to boost its brand and U.S. market share. Other high-tech firms, including Motorola, have announced plans to manufacture in the U.S.

The Lenovo plant celebration was a patriotic affair. A large sign was on display featuring the American flag and the words "Assembled in the U.S."

Lenovo officials say it's still cheaper to manufacture computers overseas but "speed of execution is key."

"Time kills deals," says Tom Looney, vice president and general manager for Lenovo North America. "We've got to do business the way our customers want to do business, and that's what this facility will give us — the flexibility and speed to beat our competition every day on the streets."

The assembly plant, built inside an existing fulfillment center, is located near a busy eight-lane highway. The plant will employ 115 workers to assemble notebooks and desktops, using components from overseas. Company officials say they hope to hire more workers.

Curtis Richardson, 27, an engineering student at North Carolina A&T State University, tests the computers to make sure they work before shipping.

"I really feel that it's an opportunity for me to grow along with the company as well. That's probably what I really love about Lenovo," Richardson says.

Economic development officials are excited. Penny Whiteheart, with the Piedmont Triad Partnership, says she likes advanced manufacturing jobs because they come with salaries that can support families.

"For instance, here in the Piedmont Triad, the weekly wage for a manufacturer is almost 20 percent higher than the average for all industries," she says. "So that's why we pay particular attention to those kinds of companies when we're looking to recruit new companies to our area."

But Mike Walden, an economics professor at North Carolina State University in Raleigh, says manufacturing alone can't make up for the tens of thousands of jobs lost when key North Carolina industries like textiles and furniture went overseas.

"We still need to have a focus of where are going to be the big, big job gains in the state. What sectors, how are we going to employ our people and what kind of training do people need to have in order to get those better-paying jobs in the future?" Walden says.

Lenovo won't say how big it plans to scale up, but right now, its focus is supplying federal and state agencies and local school districts. And the computers coming out of this plant will have an American flag on the palm rest.