Accessibility links
5 Books Of Poetry To Get You Through The Summer Critic Alan Cheuse believes that summer — with its long, hot, drowsy days — may be the best season for reading poetry. His recommendations include works by Poets Laureate Robert Pinsky and W.S. Merwin, and a novel in verse by the late essayist David Rakoff. 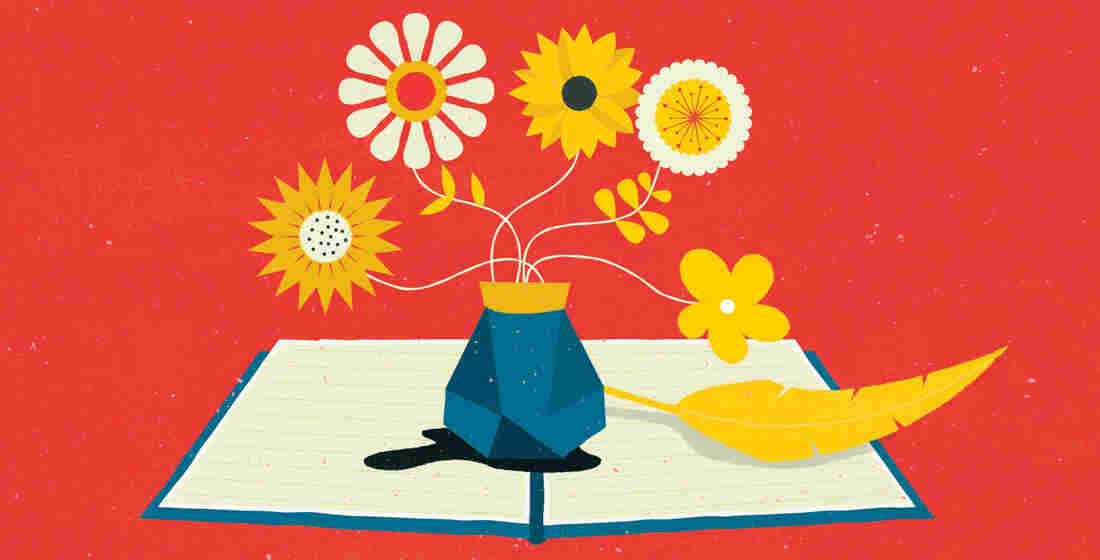 A sad tale's best for winter, Shakespeare tells us. I'm wondering if perhaps poetry, both lyrical and narrative, isn't best for summer. I'm thinking of how Keats, in "Ode to a Nightingale," describes that wonderfully musical bird as singing "of summer in full-throated ease"; and how, say, in three-time Poet Laureate Robert Pinsky's poem "Ralegh's Prizes," summer "turns her head with its dark tangle / All the way toward us" and however drowsy-making the weather, we pay attention.

Learning to Write (And Read) Poetry by Studying With the Masters

I recommend that readers and young writers alike pay attention to the career-crowning book Pinsky will bring out later this summer, called Singing School. This marvelous, new anthology, with brief essays and headnotes, is his personal account of how he learned to write (and read) poetry by studying with the masters of the form.

Within the groupings "Freedom," "Listening," "Form" and "Dreaming Things Up," Pinsky muses upon reading the poems from across the centuries — out of the ordinary and powerful and sometimes, nearly overwhelmingly beautiful — that have made up his own education as a poet. They range from Michelangelo's lament about the difficulties of painting the ceiling of the Sistine Chapel to Gregory Corso on marriage; Frank O'Hara, Yeats and Marianne Moore on poetry; Whitman on the Civil War dead; H.D. on a rose; Sappho, Pound and Sylvia Plath on love; and Sterling Brown on a sleeping Harlem.

This is a magnificent anthology of, as Pinsky defines it for us, poems to inspire — each of them with his brief and brilliant, offhand notes about how to read them.

And how to read Sharon Olds' recent, Pulitzer-Prize winning book of poems, Stag's Leap? As a ferocious, unrelenting, 90-page gathering of lyrics and laments on a single event: the last year of a crumbling marriage and its aftermath, in which the sense of loss is almost more than a reader should have to bear in such profusion. "While he told me, I looked from small thing / to small thing," she begins, "in our room, the face / of the bedside clock, the sepia postcard / of a woman bending down to a lily."

Like that woman, she bends to the beautiful. But in this case, the beautiful becomes the iteration and reiteration of the misery of love's demise. From a classic take on the subject of love — "I had thought it was something we were in" — to a nursery rhyme rhythm of self-flagellation — "Had a trust fund, had a thief in, / Had a husband, could not keep him" — Olds ranges far and wide on this single, pathetic, lamentable subject. You'll begin to hope, desperately, for her to find new happiness in love soon ... tomorrow ... today!

I hear the same music in another volume I've been saving from last fall, Brenda Shaughnessy's Our Andromeda, though her book has the opposite of divorce in mind. She laments and sometimes makes narratives about the struggle to keep her small family together in the aftermath of a difficult birth.

In the title poem, she posits a galaxy far, far away where familial love might overtake all woe and turmoil of the heart and body and mind. Once there, she says to her son, "you'll have the babyhood you deserved." She also delivers a number of lovely lyrics in a supple, plainly stated line; some merely expressive, some with a philosophically questioning air; on fate, dreams, the present time's long gaze back at the past — you know, all the good things poets write about. She writes about her Andromeda, yes, and our own.

There is scarcely anything that W.S. Merwin hasn't written about during the course of his 60-plus-year career, and the recently published, two-volume Collected Poems — nearly 1,700 pages — makes that clear. Love? He's written about it — it seems from the evidence on these pages — a million times! He's also written of death, and the Vietnam War, and ecology; he's written about time and light and objects galore as well as most of the bits and pieces that make up the human condition. His poems are composed sometimes without punctuation, sometimes with, making brief lines speak profusely and turning white space itself into something evocative that nearly reaches the level of speech.

These works remind me of Pinsky's paradoxical rule that there are no rules. As Merwin says in one of his long poems, "Lament for the Makers" — a beautiful mix of autobiography, chant and narrative on the death of poets — all life is "woods seen from a train / no sooner glimpsed than gone again." But somehow, poetry remains.

I confess that I am not a big fan of Merwin's verse novel about Hawaii (the over 200-page-long "The Folding Cliffs," published in 1998), which is included in the second volume. Merwin's experiment droned on and on for me, and no matter how much I wanted to sympathize with the characters, a family of Pacific Islanders beset by an oppressive government and fleeing into the forest, I could not finish it.

This 100-page novel in verse by the late essayist David Rakoff — which apparently was his final project before he died of cancer almost a year ago, at the age of 47 — had quite the opposite effect on me. A novel in rhyming couplets narrated in iambic tetrameter? Why not?

The story, an obliquely linked series of half a dozen narratives, begins with an account of rape and incest set in the Chicago stockyards of the early 20th century. It barrels on to Malibu, New York City, and the onset of AIDS in San Francisco, then comes together at a very high-stylistic level in the end, culminating in a single, beautiful image.

Along the way, you can have a lot of fun, no matter how serious the subject — family, sometimes alienating, sometimes consoling — because of the rhymes. Rakoff makes such pairings as virago and Chicago, ceases and paresis, skittish and Yiddish, antelope and envelope, horas and Torahs, Alzheimer's and climbers, for 100 cleverly rendered and entertaining pages.

All this wonderful poetry, it's filled up my throat as well:

So here's to your summer of full-throated ease
Singing or chanting these poems that will please
You until the leaves turn color and fall
And sad tales for winter you'll recite for us all ...