Accessibility links
Salt, Flies, Pickled Tongues: A Perfect Great Salt Lake Swim Open water swimmers in Utah perform weekly marathon swims in water five times saltier than the ocean. They endure blisters, wild currents, a variety of temperatures and water that tastes "like a battery." They treasure the beautiful view and the refuge from boat traffic. 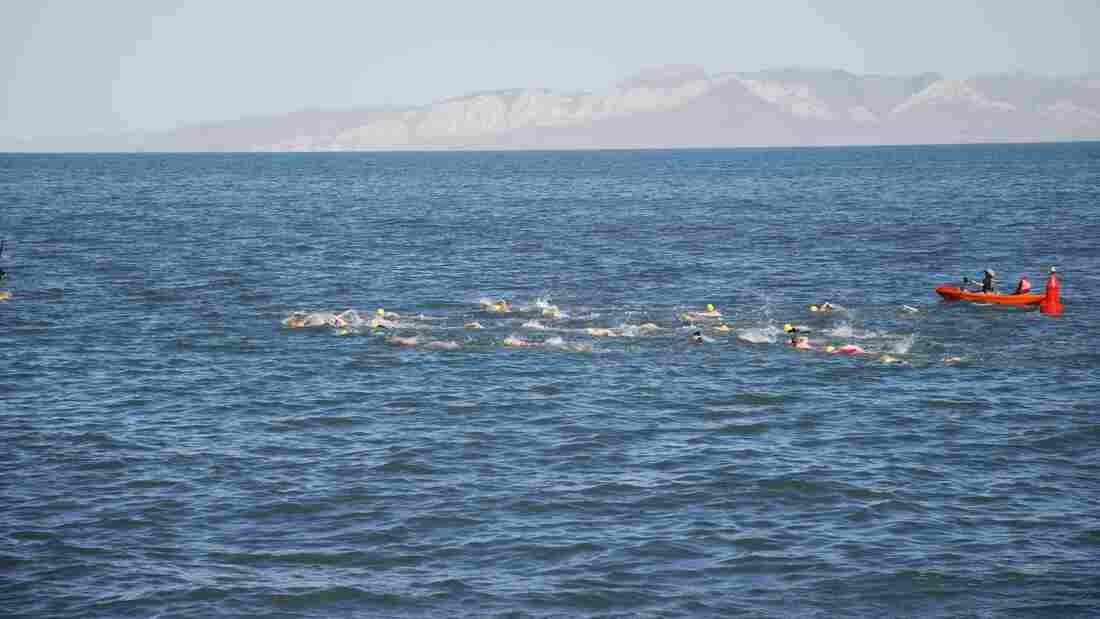 Swimmers begin a 1-mile race in the Great Salt Lake in June 2012. The mountains of Stansbury Island rise in the background. Connie Hubbard hide caption 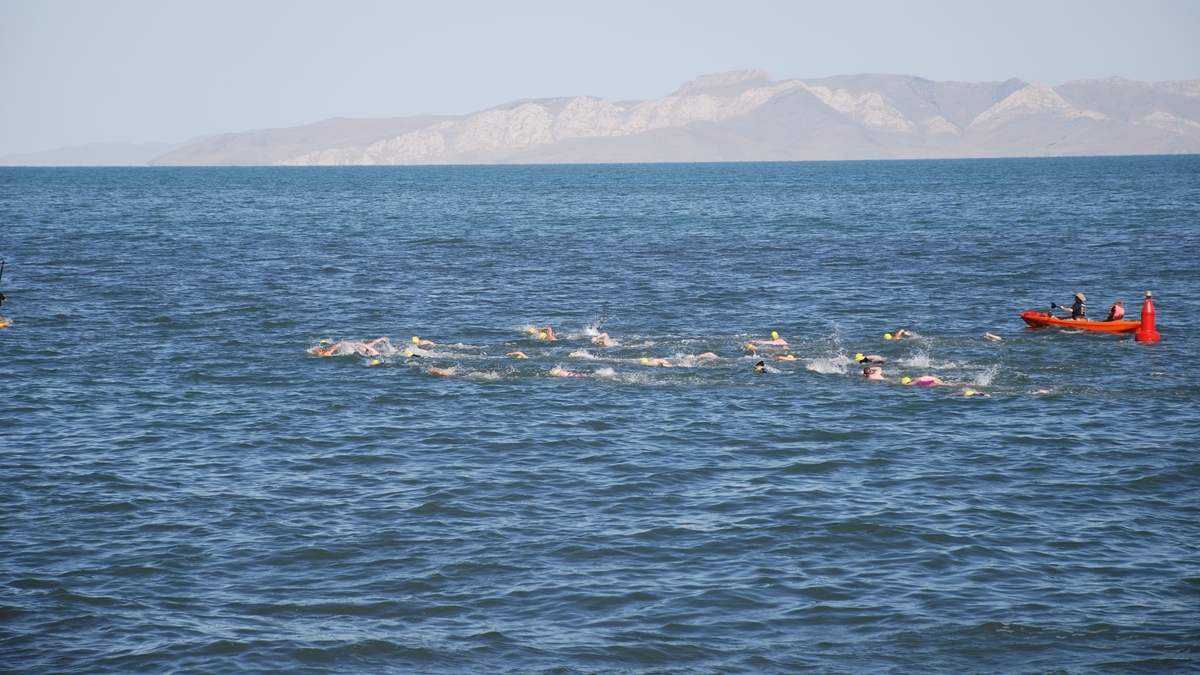 Swimmers begin a 1-mile race in the Great Salt Lake in June 2012. The mountains of Stansbury Island rise in the background.

It's the "liquid lie of the desert," as writer Terry Tempest Williams describes it, a vast inland sea so salty it triggers retching when swallowed. Brine shrimp swarm its waters and brine flies blanket the shore. In the right wind and weather its putrid smell reaches Salt Lake City neighborhoods 16 miles away. Storms churn up waves that rival ocean swells.

So, it's just perfect for avid open water swimmers, people who shun confined and pristine swimming pools for the wild waters of lakes, reservoirs and even oceans.

"If you can swim here you can swim pretty much anywhere," says Stacey Schluckebier, a surgical technician out of scrubs and in a bright plaid swimsuit at the Great Salt Lake Marina.

"You have all the facets of difficult open water," Schluckebier says, including a "wide variety of temperatures, wide variety of wind direction [and] currents. And it's fun."

"Fun" means weekly swims of 400 yards to 6 miles in the Great Salt Lake, in fall, winter and spring. There's plenty of room — 1,700 square miles — and plenty of salt. The lake is five times saltier than some ocean water, which adds unique challenges.

First, there's the taste of the lake. Gordon Gridley, a software developer, swam the English Channel last summer, so his taste buds can compare.

"The Great Salt Lake was like swallowing a battery," Gridley says, "whereas swimming in the ocean was like a glass of lemonade." He warns newcomers about swallowing lake water. "You could end up throwing your guts up."

Of Sense And Salinity: A Swim In The Great Salt Lake — Kate Greene of San Francisco spent the summer of 2012 swimming in open water in as many states as possible. Greene recalls her experience in this recent essay in High Country News.

So swimmers learn to keep their mouths closed as much as possible and to breathe out through their nostrils. That helps with another nuisance, especially in summer, when brine flies swarm in clouds on the surface of the water.

"They'll fly right in your mouth and sometimes right down into your lungs and then you're coughing up not water but brine flies," Gridley says. Most simply forsake the lake in the summer when the brine flies are thickest.

Year-round, though — and there are swimmers who take to the lake no matter how cold the air and the water — the salt is painfully corrosive on bare skin.

"It's almost like sandpaper rubbing against you," Gridley explains. "It doesn't take long before you start to get blistered up, and in some cases it's just really, really painful. It burns. So that's why we put the grease on."

The "grease" is a mix of Vaseline and lanolin, and the swimmers slather it on in the parking lot. Goggles are a must, of course, along with bright orange inflatable bags that hold snacks, drinks, GPS devices and even cellphones. The bags drag behind the swimmers and make them visible to the rare passing boat and each other. 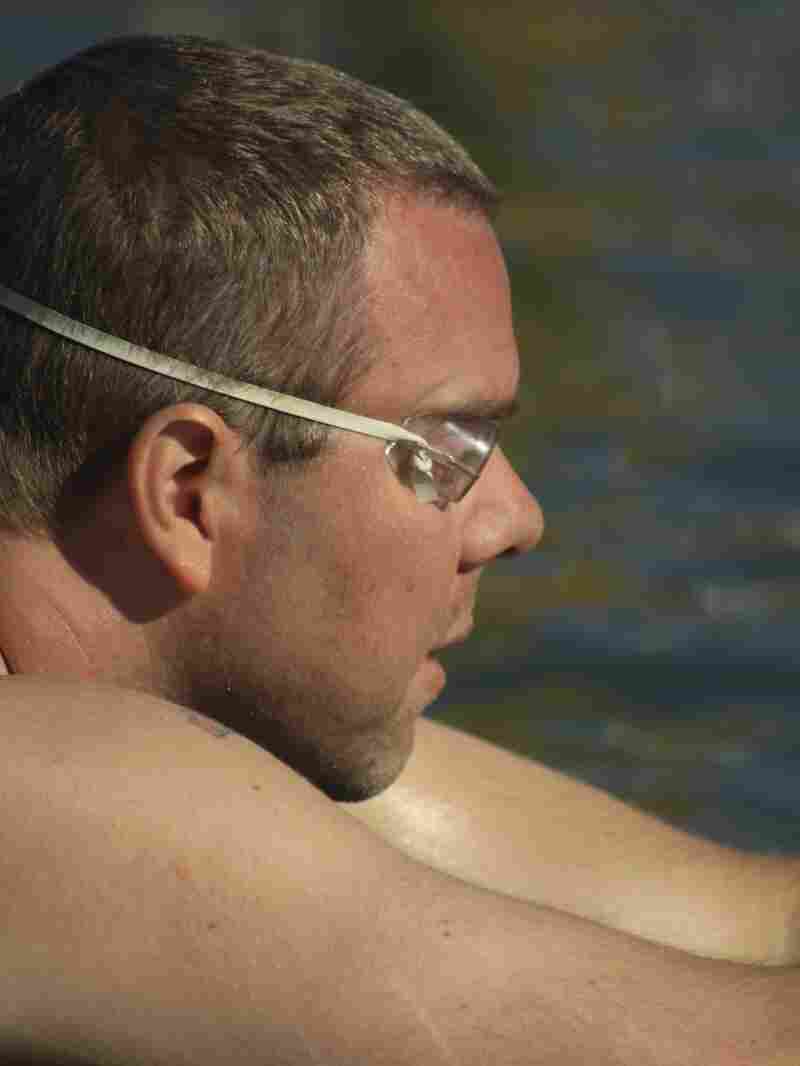 Read the story of Goody Tyler, a schoolteacher who earned the "ice man" label for swimming a mile in 41-degree water in the Great Salt Lake. He credits that swim and workouts in the lake for helping him withstand the tedium of chemotherapy while being treated for cancer. Wanda Gayle hide caption 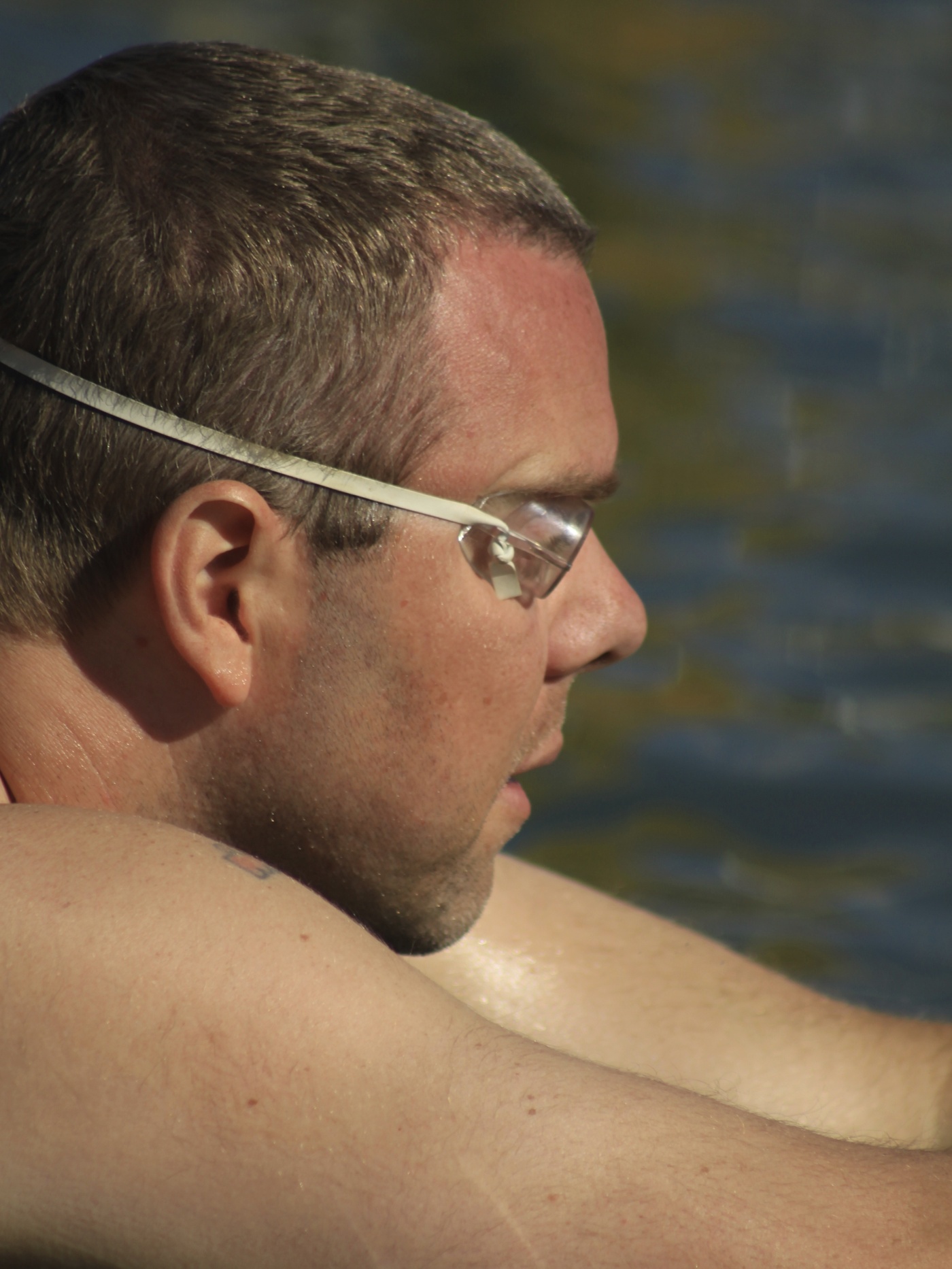 Read the story of Goody Tyler, a schoolteacher who earned the "ice man" label for swimming a mile in 41-degree water in the Great Salt Lake. He credits that swim and workouts in the lake for helping him withstand the tedium of chemotherapy while being treated for cancer.

"There's very little boat traffic," says Goody Tyler, a schoolteacher who turned to the Great Salt Lake, in part, to avoid the motorboats and Jet Skis of the area's reservoirs. They stay away from the lake because the extreme salinity is tough on motors and hulls. "On a normal day you're lucky to even see one boat," Tyler says.

Two years ago, an open water swimmer was killed by a motorboat in Pineview Reservoir in Utah.

The lake mostly gets sailboats and racing sculls, which are generally not a problem. The swimmers hang a yellow warning flag at the marina so sailors and rowers know to watch out for churning arms and legs in the water.

Tiny brine shrimp are more of a curiosity than a nuisance. "I've had hundreds in my suit," recalls Sue Frehse, a coach for a suburban Salt Lake City swim club. "But they don't bite or chew or cling on to your body." But cuts or open sores sting unmercifully in the briny water.

So what's the big attraction? Why put up with the salt, the flies, the shrimp, the waves, the smell and the pain? Well, bragging rights and gnarliness, for starters.

There's nothing hard-core about gabbing with a reporter in the parking lot. So the swimmers adjust their goggles, grab their inflated orange bags, walk down the boat ramp and wade into the 66-degree water. Soon, orange floats and churning arms and legs become distant dots.

The swimmers seem minuscule and vulnerable. The water behind them reaches to a distant horizon. Snowcapped peaks offshore and mountainous islands in the lake rise thousands of feet above them.

That's the other big attraction — the setting.

"It's just a beautiful lake," says welder Chad Starks, standing in a Speedo on dry land. It's often clear and always clean, he adds. "The contour of the bottom is just different than you see anywhere else."

Tyler cherishes the view above the water as he swims. "You'll turn and you'll breathe and you'll see this huge mountain range that's still covered in snow," he says. "And it's just gorgeous."

After this swim, Josh Green, a commercial real estate appraiser, heads for a water pump and hose near the boat ramp.

"This is what you look forward to — the freshwater hose," he says, smiling, as he washes the salt and brine shrimp from his skin and swimsuit.

Part Of A Tradition

Green is one of the original modern-day Great Salt Lake open water swimmers, reviving a tradition that thrived in the 1920s, '30s and '40s. Three years ago, he, Ridley and Tyler began the weekly swims, in part because reservoirs and lakes were freezing in winter. The Great Salt Lake is too salty to freeze in all but the most extreme winters.

The group began marathon swimming races and the next one is set for Saturday. About 30 competitors are expected. Some will swim a mile but others will start from Antelope Island, a brown and rocky mountain ridge in the lake, and swim nearly 8 miles to shore. That's 3 1/2 to four hours in the brine, enough to begin the curing process, especially for tongues.

"[They'll] be all wrinkly and pickled," Green says, laughing.

"Last year after the 8-mile race we gave out a special award," he says, chuckling, "a big jar of pickles for the most pickled tongue."