Accessibility links
Former Mass. Chief Justice On Life, Liberty And Gay Marriage With its upcoming decisions on same-sex marriage, the U.S. Supreme Court faces the same question that Margaret Marshall faced a decade ago as Massachusetts' chief justice. Marshall says she had little idea that the decision she wrote legalizing gay marriage would be groundbreaking. 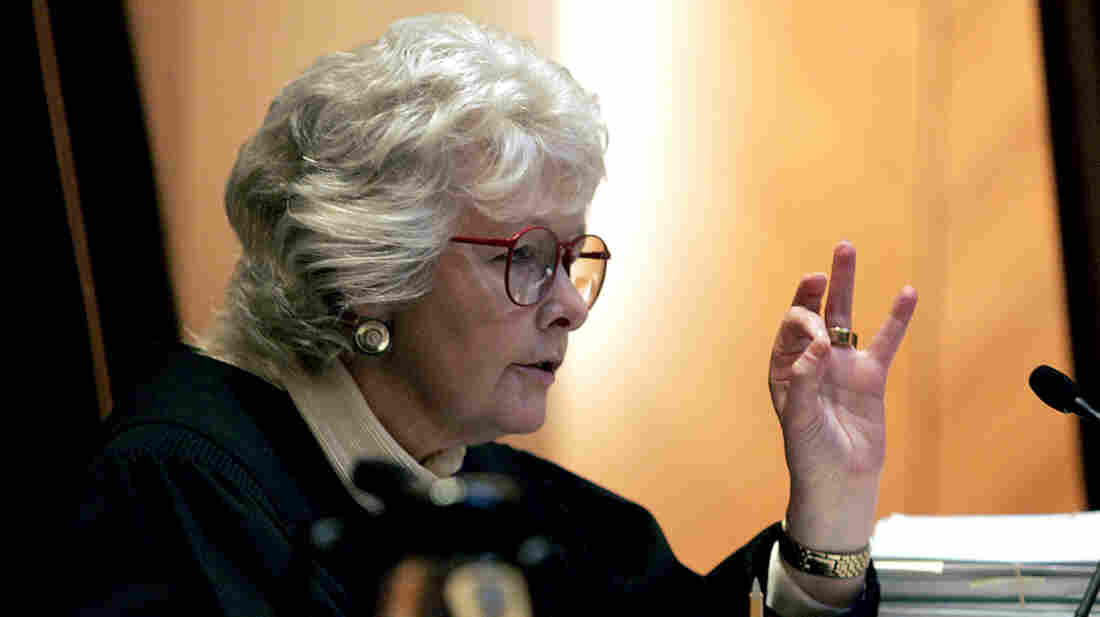 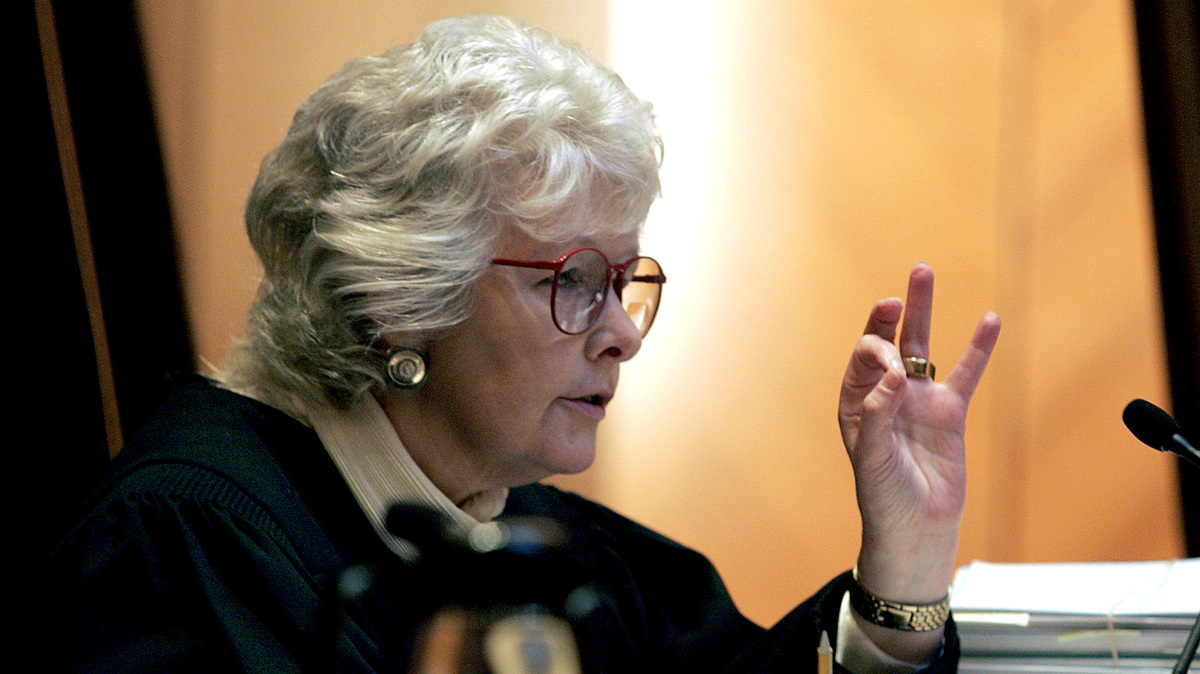 Chief Justice Margaret Marshall asks petitioner to explain a point during arguments before the Supreme Judicial Court in Boston in 2005.

The U.S. Supreme Court, on the brink of issuing two same-sex-marriage decisions, is facing a question that Margaret Marshall had to resolve for her state a decade ago, as chief justice of the Massachusetts Supreme Judicial Court. Her decision became the first to legalize same-sex marriage in the United States.

"Barred access to the protections, benefits and obligations of civil marriage, a person who enters into an intimate, exclusive union with another of the same sex is arbitrarily deprived of membership in one of our community's most rewarding and cherished institutions," she wrote in 2003. "That exclusion is incompatible with the constitutional principles of respect for individual autonomy and equality under the law."

Marshall's opinion back then hit the body politic like a bomb, making headlines across the globe. A subsequent attempt to undo the ruling with a state constitutional amendment failed.

While many experts believe the U.S. Supreme Court may dodge a ruling that would bind all states on the issue of same-sex marriage this year, Marshall's 2003 opinion for her court will remain historic.

Excerpts from the 2003 decision legalizing same-sex marriage in Massachusetts:

"Marriage is a vital social institution. The exclusive commitment of two individuals to each other nurtures love and mutual support; it brings stability to our society."

"Because it fulfills yearnings for security, safe haven, and connection that express our common humanity, civil marriage is an esteemed institution, and the decision whether and whom to marry is among life's momentous acts of self-definition."

"Alarms about the imminent erosion of the 'natural' order of marriage were sounded over the demise of antimiscegenation laws, the expansion of the rights of married women, and the introduction of 'no-fault' divorce. Marriage has survived all of these transformations, and we have no doubt that marriage will continue to be a vibrant and revered institution."

"The marriage ban works a deep and scarring hardship on a very real segment of the community for no rational reason. The absence of any reasonable relationship between, on the one hand, an absolute disqualification of same-sex couples who wish to enter into civil marriage and, on the other, protection of public health, safety, or general welfare, suggests that the marriage restriction is rooted in persistent prejudices against persons who are (or are believed to be) homosexual."

And it marked just one way in which she has been a trailblazer. In 1996, she was appointed by a Republican governor to the state's highest court — the oldest continuously serving appellate court in the Western Hemisphere. Three years later, she was promoted to chief justice by a second Republican governor, becoming the first female chief justice in the state's history.

'The Blinders Had Been Removed'

On paper, Marshall's path to the court looks fairly predictable, even tame: Yale Law School, private practice, general counsel for Harvard University. But that is only part of the story.

Marshall is an immigrant to the United States who grew up in a small South African village as the unpolitical daughter of unpolitical parents.

In 1962, she came to Wilmington, Del., as a high school exchange student, just as the civil rights struggle was heating up. There was widespread violence in the South — police brutality and civilian deaths. But none of that discouraged the teenager.

"It was raucous and it was challenging and it was difficult," she said of the United States. "But nobody suggested that one would be imprisoned simply for expressing a view or having an idea or reading a book or attending a movie."

And all of that was a crime in South Africa.

During her studies at the Tatnall School in Wilmington, Marshall was encouraged to think for herself — a skill that had not been emphasized in South Africa.

"What I experienced for the first time was a recognition that one could question ... the government, as my American family did every day after we listened to Walter Cronkite," Marshall said in an interview with NPR. "I think I learned more about South Africa during that year in Wilmington, Del., than I had learned in my entire life."

Perhaps more breathtaking were her visits to the library. In South Africa, she had never been able to pick out whatever book she wanted to read, because so many were banned. In the United States, for the first time, she could read anything, including Alan Paton's Cry, the Beloved Country — a fictional black man's portrait of South Africa in the 1940s.

When Marshall returned to South Africa after that year, she was not the same girl. "Once one's mind is opened, it's very difficult to shut it again," she says. "And I literally felt as if the blinders had been removed from me, and so I began to see and observe and perceive."

By then, Nelson Mandela was already in prison. Marshall joined the National Union of South African Students, a coalition of university student councils that opposed apartheid. And she began attending the trials of anti-apartheid activists — including the lawyer who had represented Mandela.

"I'm not quite sure why I did that," she muses. "But I felt in some way that I had to bear witness in that fundamental religious Christian sense." Her attendance hardly went unnoticed. "Every time, of course, I went to court and sat in the whites-only section of the public galleries, I knew that I was being watched by the security police."

Almost without knowing it, as she would later, she was challenging the authority of the state to unilaterally define people.

Then came a turning point. Marshall describes 1966 as "one of the bleakest years in a bleak time" in South Africa. All of the leading anti-apartheid activists were in jail, in exile or had been killed. Sen. Robert Kennedy accepted the invitation of Marshall's student organization to give an address at the University of Cape Town. The speech, often referred to as the "Ripple of Hope" speech, was a lifeline for Marshall, who had found herself beginning to lose hope.

"The key message in the 'Ripple of Hope' speech, which made such an impact on me, is that if each person does some small thing, ultimately each of those small acts will add up to a combined impact that will tear away the greatest oppression," Marshall says. "That was both reinforcing and inspiring to know that we were not wasting our lives."

Marshall came back to the United States for graduate school in 1968, not intending to stay, and certainly not intending to immigrate. She became involved in the women's movement and opposition to the Vietnam War, and she got a chance to travel the country, through the hills of Tennessee and the Great Plains of Nebraska and the Ozarks of Arkansas. 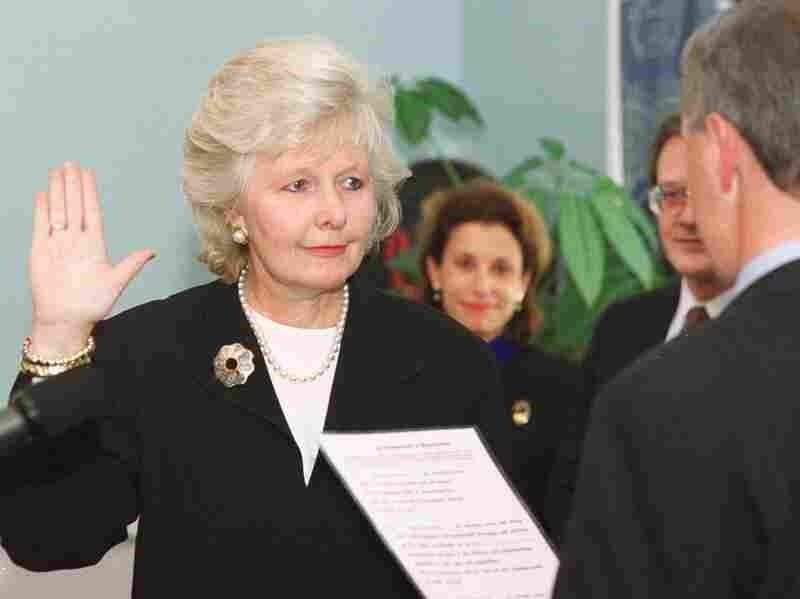 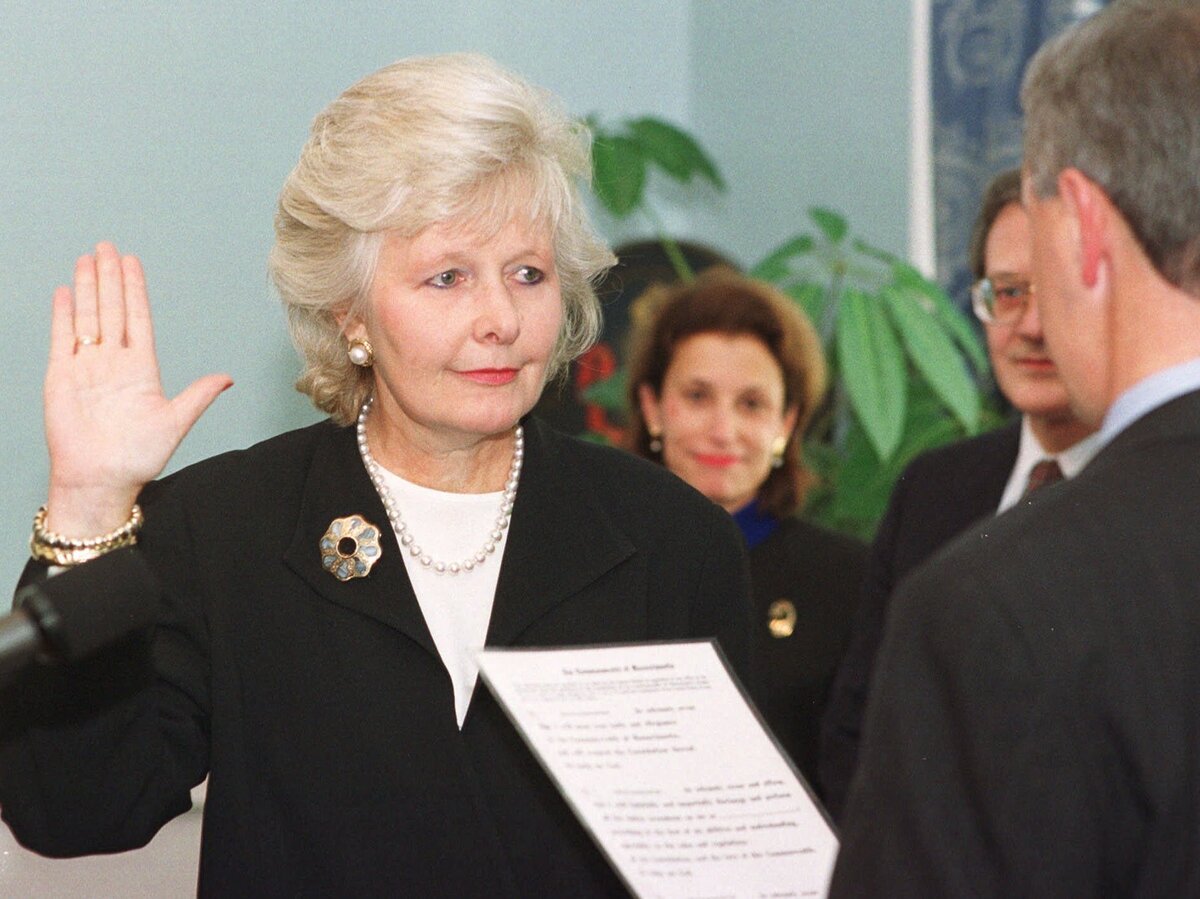 Justice Margaret Marshall is sworn in by Massachusetts Gov. Paul Cellucci as the first female chief justice of the Massachusetts Supreme Judicial Court in 1999.

"And then, like generation after generation of immigrants, I fell in love with the United States — deeply in love with this country. And frankly, it's a love affair that has never ended," Marshall says. "For me, the personal experience has been a country that never wavered, that never put any barrier in my way.

"As long as I worked hard, this country was accepting — accepting of my strange accent, accepting of my gender, and that is a remarkable aspect of the United States. I don't think there's another country in the world" like it.

A New View Of Law

The United States was a safe haven for her, too, but once here, she began having terrifying nightmares, a sort of PTSD, harkening back to her life in South Africa; every night, in her dreams, she was being ripped from her home and "disappeared."

"The greatest fear that I had in South Africa," she said, "was that I could be arrested in the middle of the night and then would just disappear. ... And I think that sense that you will be lost, that you will disappear, is a profound sense that all human beings fear for."

Marshall stresses that something entirely new to her was the manner in which the American government used the law. Under apartheid in South Africa, the law was an instrument of oppression. Parliament would pass laws, and there was no recourse; no court could invalidate them. But in America, Marshall saw the law used as an instrument of democracy. "You, as an individual citizen, you have the right to challenge a law that your government enacts," she observes.

Although she had not planned to be a lawyer, her path inevitably seemed to lead her there. And from the beginning she was a star, first in law school at Yale, then in private practice and as president of the Boston Bar Association, then as vice president and general counsel for Harvard University, and finally at the state's highest court.

She laughingly concedes the point, knowing that however great her other accomplishments, she will be most remembered for her 2003 opinion striking down the Massachusetts law that banned same-sex marriage.

Marshall maintains that she had not focused on or been aware of the issue at all until it reached her court, and that she had no tingling feeling of a historic moment when writing the opinion. What did surprise her, however, was the huge national and international reaction after the decision was announced.

"Massachusetts is one small part of the United States," Marshall said. "It never occurred to me that this would be, in any sense, a groundbreaking decision."

During this spring's oral arguments at the U.S. Supreme Court over same-sex marriage, Justice Antonin Scalia asked when it became unconstitutional to bar people of the same sex from being married.

"I'm curious, when did it become unconstitutional to exclude homosexual couples from marriage? 1791? 1868, when the 14th Amendment was adopted?" Scalia asked. "When did the law become this?"

Marshall says for her, the answer was clear: "When the states started giving huge benefits and privileges to one section of the population.

"If you're married, you have just enormous benefits, and if you're in the same committed lengthy relationship, but you happen to be within the same gender, you have none of those benefits and protections," she observes. Her 2003 opinion listed many of the hundreds of laws that give preferences and benefits to married couples.

Marshall clearly loved her job as chief justice, but in 2010, after 14 years on the bench, she stepped down to spend time with her husband, Anthony Lewis, a Pulitzer Prize-winning journalist, who had been diagnosed with Parkinson's disease. Lewis died in March.

Marshall has now returned to her old law firm, where she mentors young lawyers but does not appear in court. She is teaching at Harvard Law School.

"Mostly what I hope to do is to provide to newer, younger members of the profession the kind of knowledge that I acquired over time and to give back in whatever way I can to this profession which has given me so much," Marshall says.

And like everyone else, she is waiting to see what the U.S. Supreme Court does on the issue of same-sex marriage.