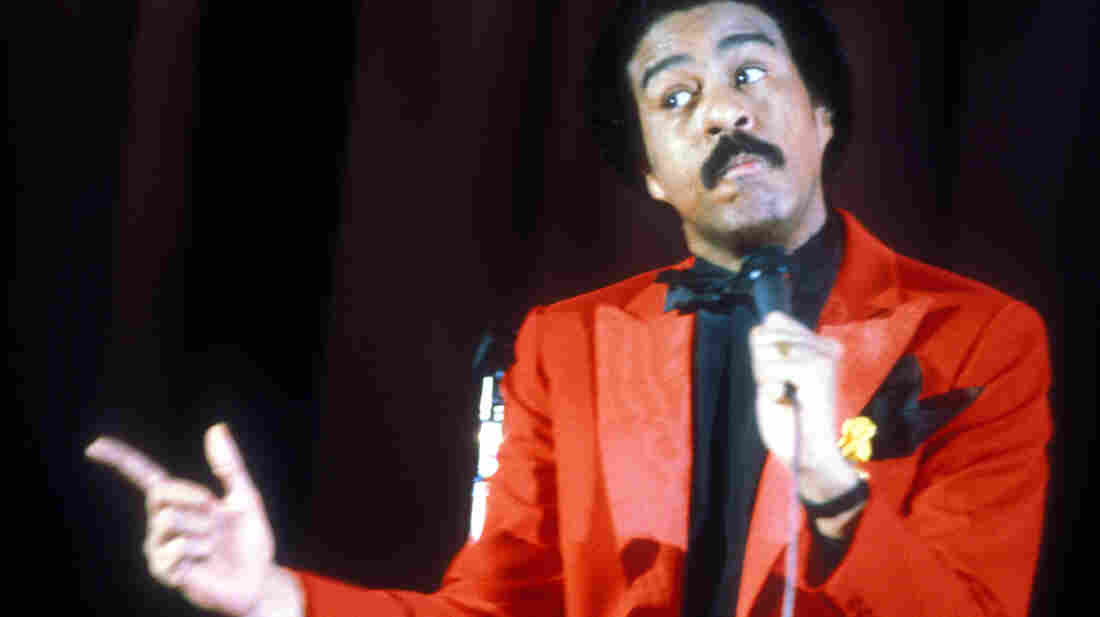 In this 1982 performance, comedian Richard Pryor makes fun of his well-known difficulties with cocaine. The Kobal Collection hide caption 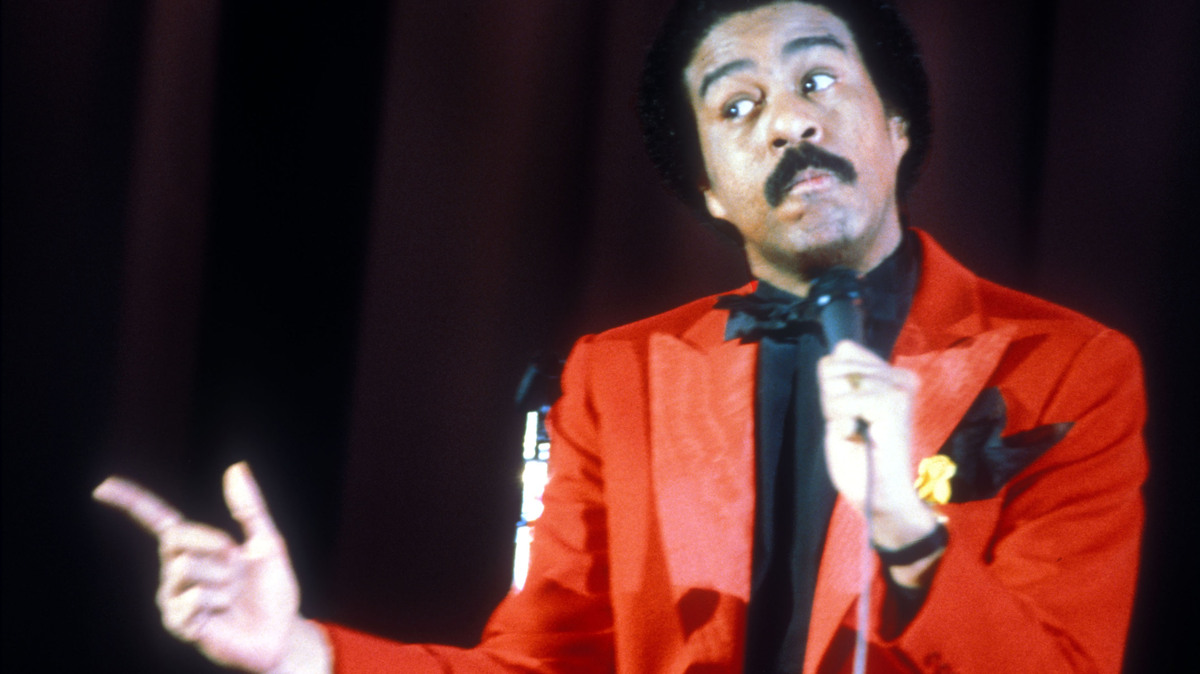 In this 1982 performance, comedian Richard Pryor makes fun of his well-known difficulties with cocaine.

Richard Pryor occupies his own special category in comedy. He played Las Vegas and made popular movies, and performed routines that were almost short stories — searing, profane and moving.

Pryor grew up in his grandmother's brothel in Peoria, Ill.; she beat him, too. He was expelled from high school and enlisted in the U.S. Army, but spent much of his military stint in prison. And with a special fever of genius — torched by drugs, fueled by grief and enlivened by exhilaration — he created unforgettable depictions of what it's like to feel left out of American life.

Pryor died in 2005, after a long battle with multiple sclerosis, heart disease and drugs. Now, Shout!Factory has released a new box set of Pryor's work, called No Pryor Restraint: Life in Concert. It serves as a reminder why the comedian won the first Mark Twain Humor Award and topped Comedy Central's list of the 100 Greatest Standups of All Time.

Pryor's widow, Jennifer Lee Pryor, was also his manager. She tells NPR's Scott Simon that she had been dating Pryor for some time before she first saw him perform in 1978. They'd already been out for the evening, she recalls, but Pryor wasn't done yet. "He pulls into the driveway of the Comedy Store on Sunset Boulevard and the next thing I know, I see Richard onstage," she says. "I was very surprised that this was the culmination of our evening, but more surprised that this was so unintended; that in fact, it was so spontaneous. But that's how Richard worked."

On that first performance

"He started talking about candle wax on the floor — the first thing he saw — and from there, he just spun this incredible web of humor but also drawing the audience into unexpected discovery and adventure. And this was who Richard was. He would fly with no net. And that was the first night, by the way, he had gotten onstage after the New Year's Eve, very public New Year's Eve incident" — Pryor allegedly fired several bullets at his soon-to-be-ex-wife's car — "which he had been arrested for, by the way. ... Of course, what his genius was, was taking that incident, that terrifying incident, and turning it into comedy."

On domestic violence allegations against Pryor

"There's never been anybody I've met who has been as vulnerable, as willing to be open and loving, as Richard. He had a great capacity for the deepest empathy of anybody I've ever met. Of course, this would go to a dark side because Richard was a very hypersensitive human being. If he saw a look of judgment, or scorn, it could wound him as deeply as if someone had taken a knife to him. So that's the price of genius. Genius isn't free; there's a great price to pay. And Richard knew it."

On Pryor setting himself on fire after free-basing cocaine

"I went up to the house in Northridge. He was in very bad shape; he was very very addicted to ... cocaine. And he said, 'There's no way out, I don't see a way out. I've made my mind up; I've chosen.' And I begged him; I said, 'Richard, please don't hurt yourself, don't you hurt yourself.' And he said, 'I'm telling you right now, if you don't leave now, you're going to get hurt, too.' So I did get the hell out. And 20 minutes later, it had happened, and he was literally running down the street on fire. ... It was an attempted suicide."

On why we should listen to him

"Richard, from A to Z — you have incredible light, incredible darkness, incredible joy. And you know, all of us have that in our lifetimes. Obviously, some of Richard's dark periods were more extreme than what any of us will go through. But the point of Richard is how brave he is, and how wonderful he is, to tell the whole story. The whole story is there for all of us to see. And why we connect with him so deeply is, he's willing to show it. Very few people are willing to show it. So his own truth and his own moral compass was so courageous that people grabbed hold of it for themselves, and for their own life. So it's important to listen."