Accessibility links
Clothes Make The Man (And The Woman, And The Show) On Broadway Among the hopefuls who might take home trophies at this weekend's Tony Awards are costume designers William Ivey Long and Dominique Lemieux. Jeff Lunden talks to the two about their work on Cinderella and Pippin, two of the season's better-upholstered revivals. 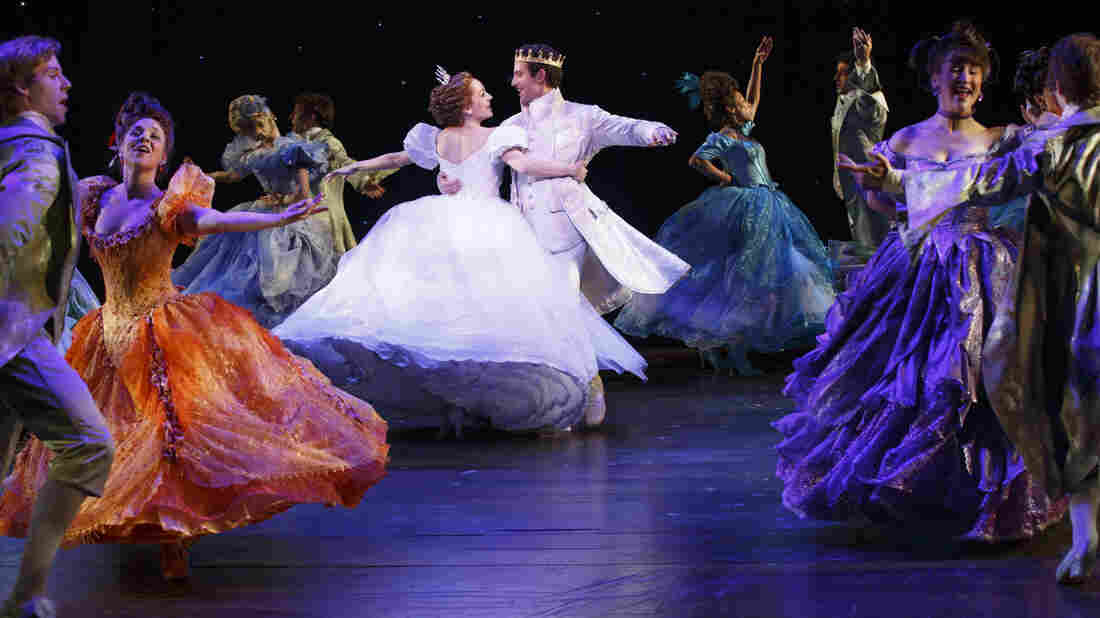 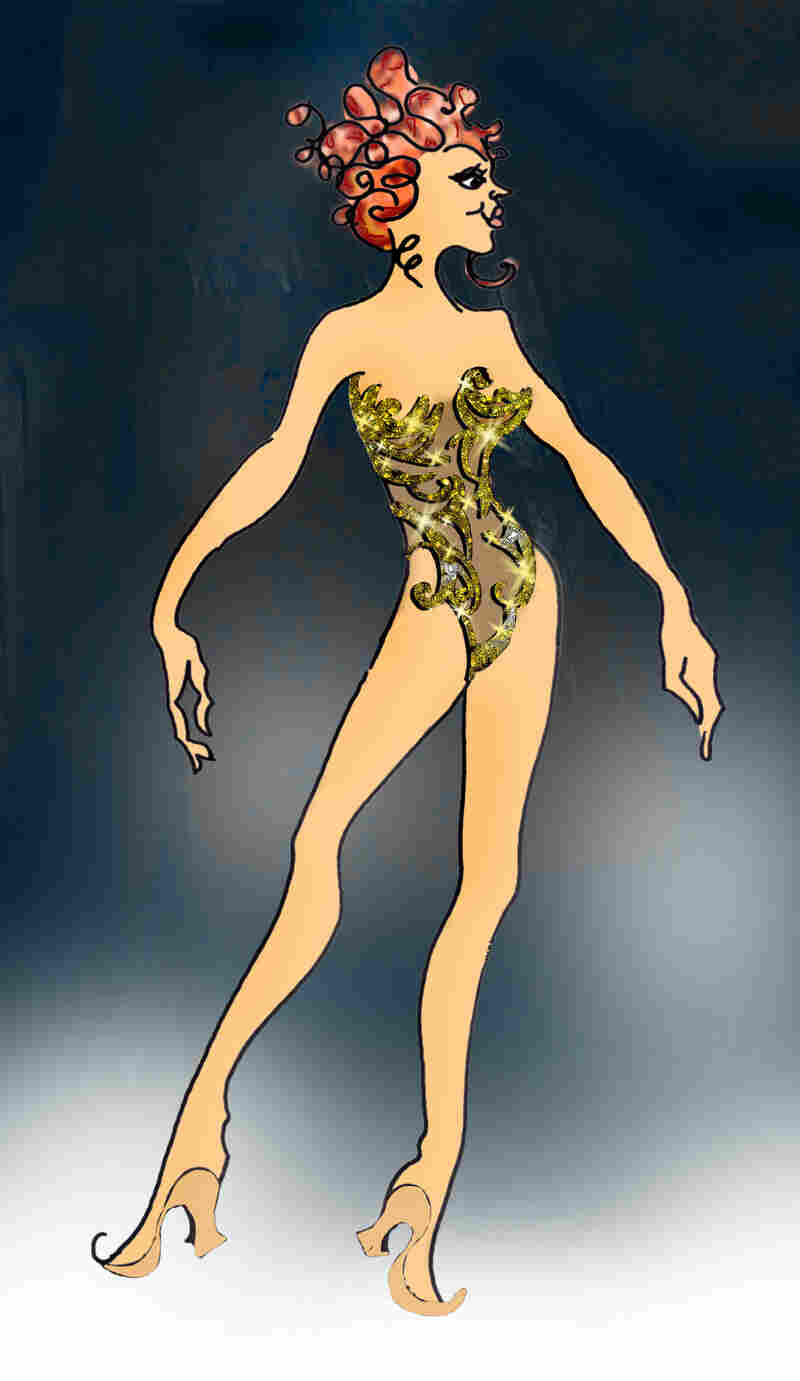 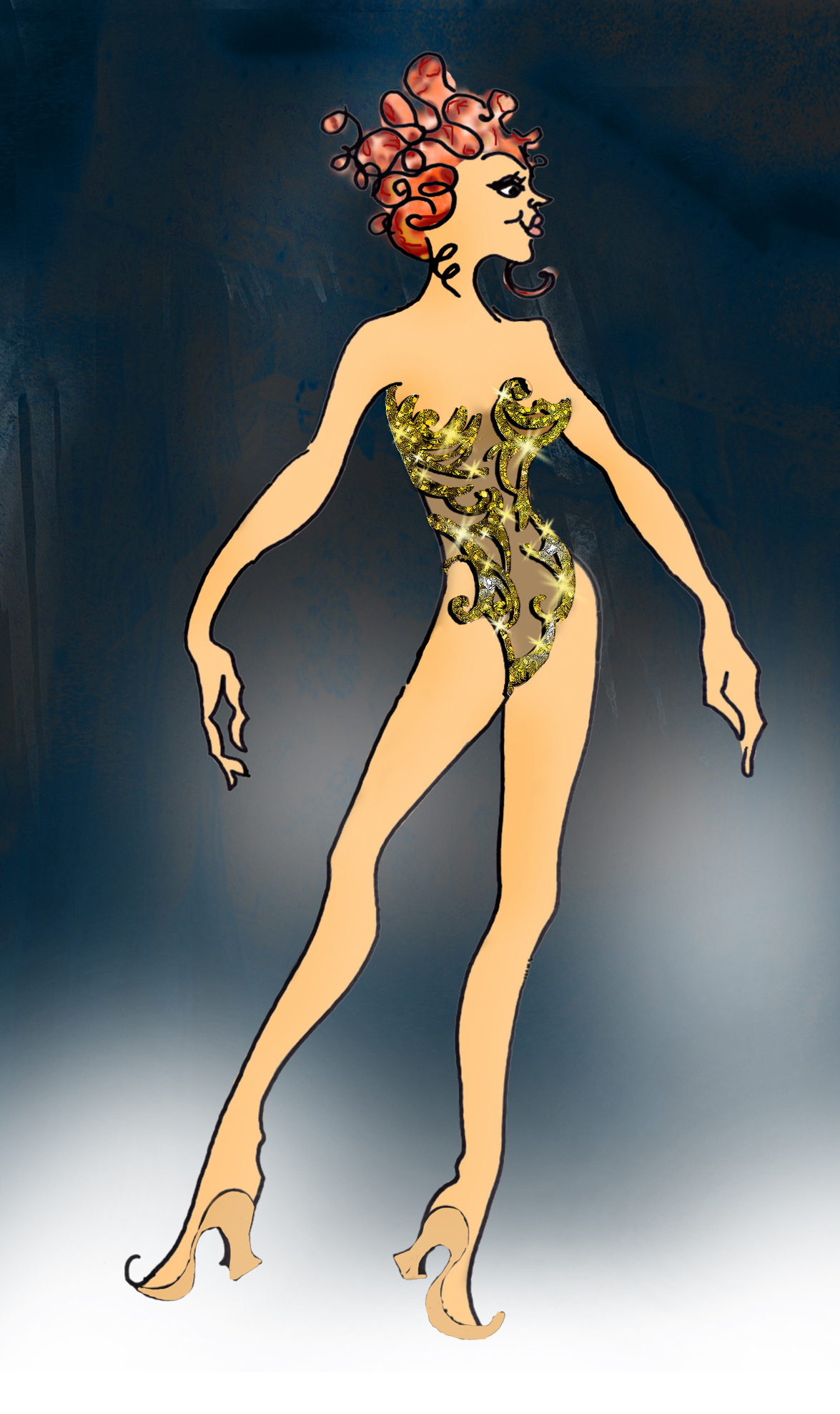 For Pippin, designer Dominique Lemieux imagined this costume for the character of Fastrada ...

And a battalion of workers is involved in a highly choreographed backstage ballet, not just to keep the actors looking good but to help them change costumes almost instantaneously.

Two and a half hours before the actors and acrobats of the Broadway revival of Pippin take the stage, the costume department is already busy at work deep in the bowels of the Music Box Theatre — sewing, washing, hanging up costumes, putting clothes and shoes into baskets. Wardrobe supervisor Meghan Carsella says the costumes at Pippin take quite a beating. 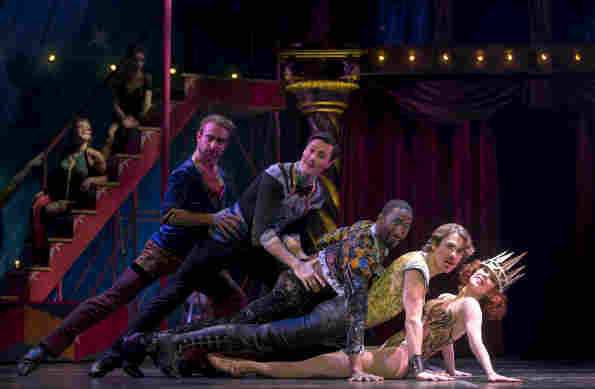 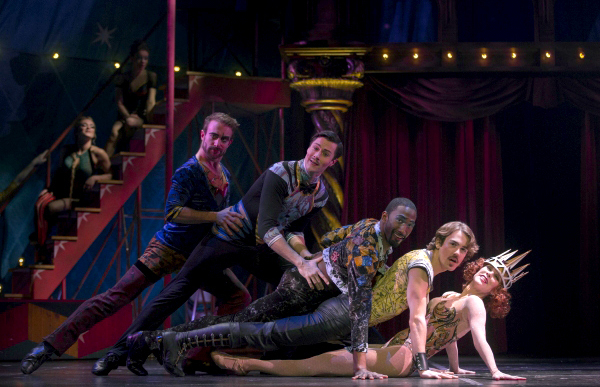 ... played by Charlotte d'Amboise (at right) in the Tony-nominated revival directed by Diane Paulus.

"People are on trapeze in them," Carsella says. "And sliding down poles and sliding along the floor and getting thrown. So that's the hardest part ... just to try to make them look how they came."

Carsella supervises a team of 17 charged with making sure the 90 costumes for Pippin look good. The show, about the son of Charlemagne, is told by a traveling troupe of circus performers, so Tony-nominated designer Dominique Lemieux has created costumes that have a kind of timeless feel.

For Lemieux, who has designed many shows for Cirque du Soleil, there are some tricks to making costumes that are both flexible for the acrobatics and durable for the long haul.

"I use a lot of Lycra. It save my life very often!" she exclaims. "If you have a fabric that is not elastic, you can mix some part with Lycra, and it will make a pair of pant that look very ordinary. ... Mix the Lycra in some part, it become magic!"

Over at the Broadway Theatre, where Cinderella is playing, there's a lot of costume magic — literally. Twice in the show, Cinderella, played by Tony-nominated actress Laura Osnes, changes from her peasant rags into a beautiful ball gown right in front of the audience's eyes. 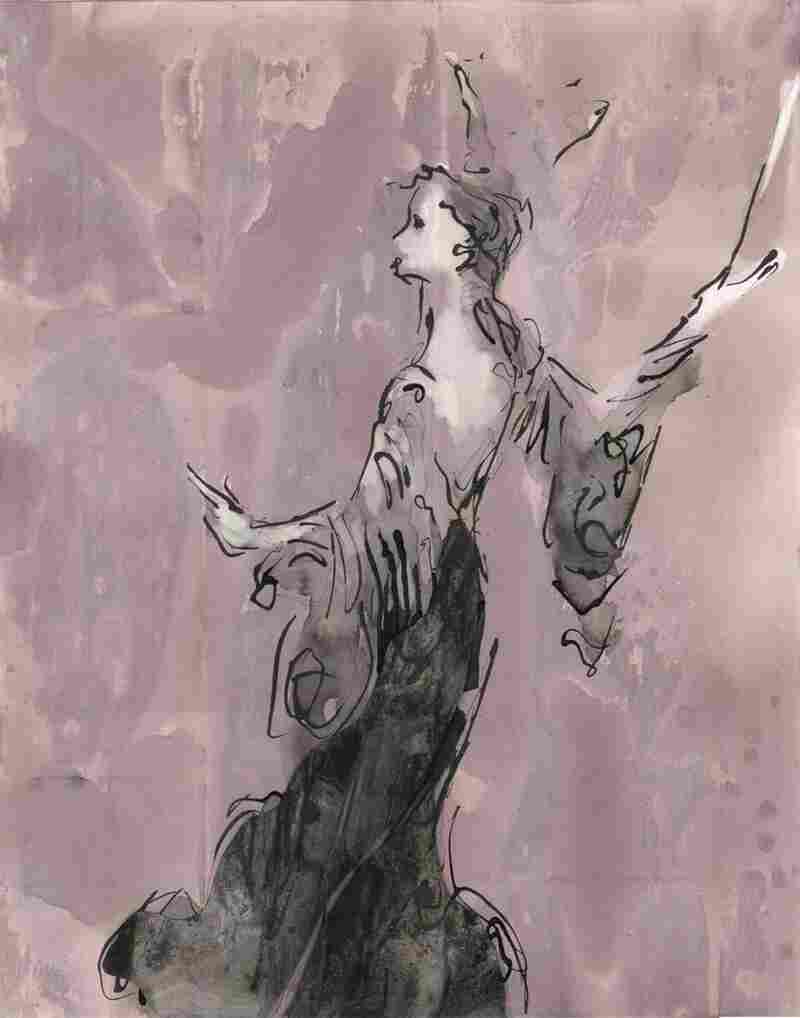 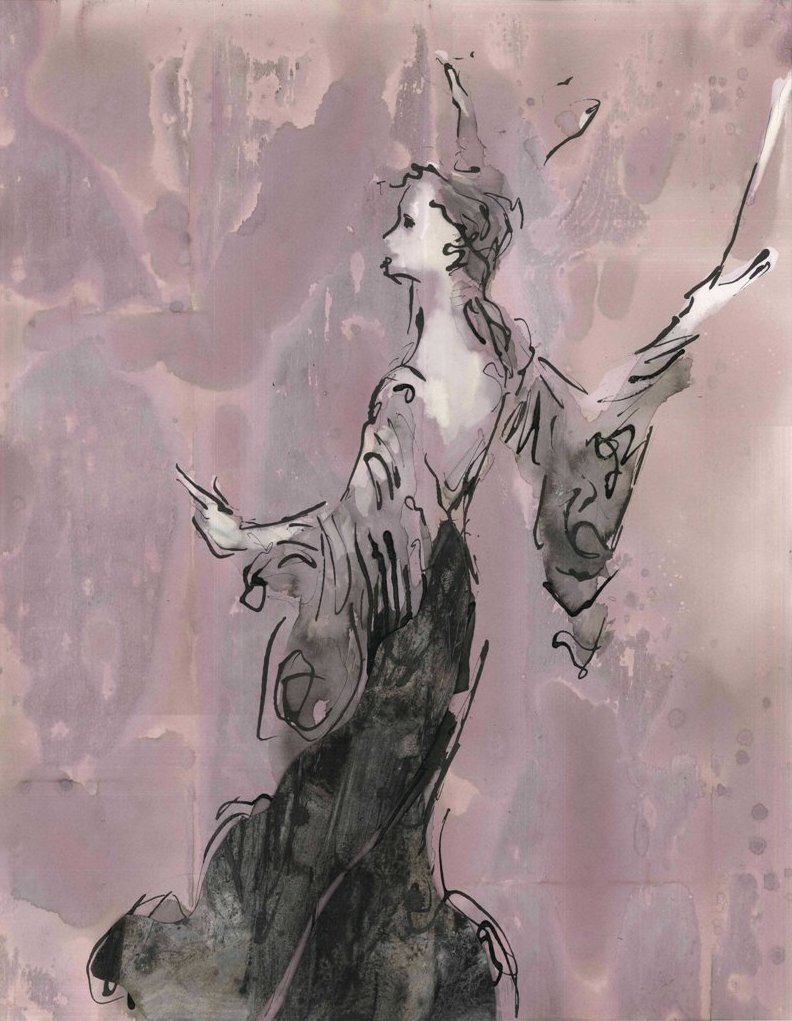 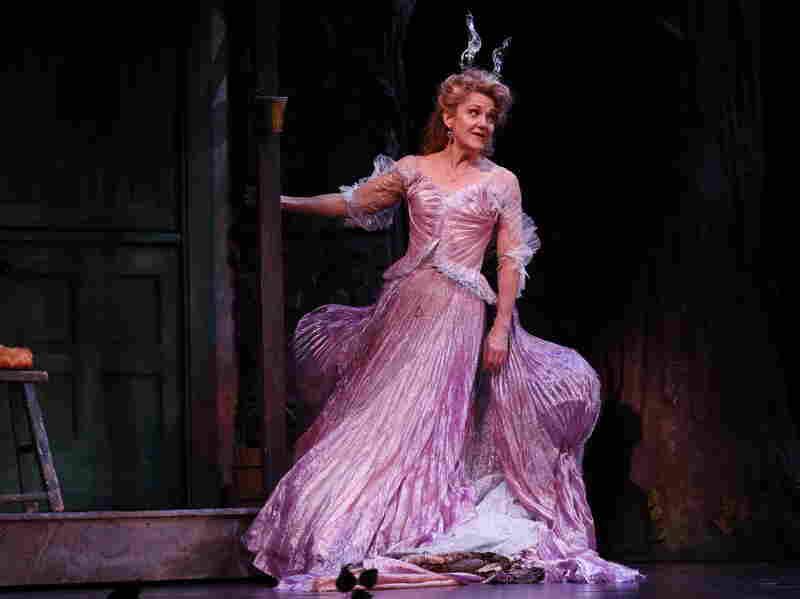 ... and the costume as executed for actress Victoria Clark. Carol Rosegg/ hide caption 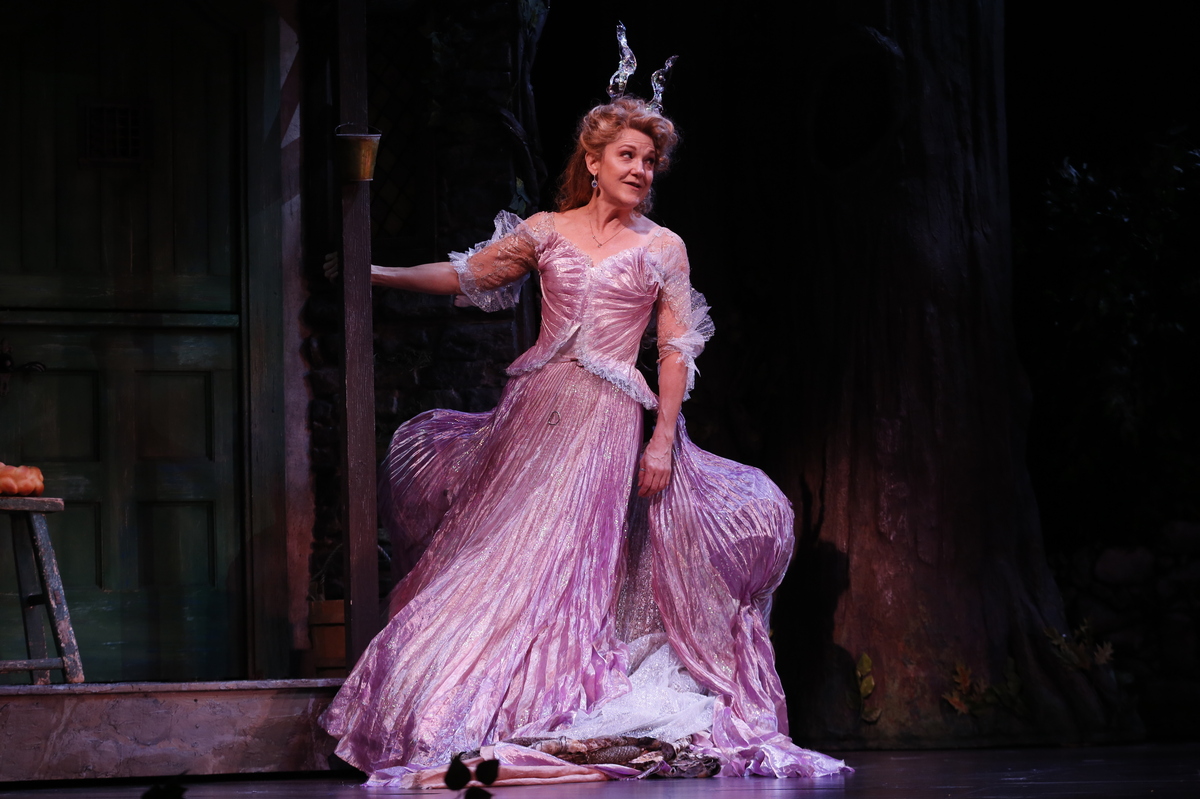 ... and the costume as executed for actress Victoria Clark.

One magician behind the transformation is Osnes' dresser Tammy Kopko, who helps rig William Ivey Long's Tony-nominated costumes — and waits just offstage to help the actress make her jaw-dropping onstage transformations. At his studio in downtown New York, the designer showed me his costume sketches.

"All the changes are done by a magic wand spinning her around," he says. "So I tried to include the spinning in all these sketches, so you constantly saw movement. And doesn't that sort of look like you're whipping up a meringue? Well, anyway, I hope that's what it looks like."

Ivey Long has designed 330 separate costumes for Cinderella — peasant clothes, knights in armor, beautiful ball gowns. It is, he notes, a fairy tale. And he says it all has to be designed to be changed very quickly.

"A quick change is four seconds. A fast change is, like, 15 seconds," he explains. "If you have a whole minute — in the old days, you could smoke two cigarettes after you've got [a quick change] under your cuff, because a minute is, like, glorious. Well, now think about it. You can't get dressed in the morning in a minute, right? So these are professionals. Every ensemble member is a major pro."

There are 30 cast members in Cinderella and 30 more people who work exclusively on wardrobe. Dresser Kopko says during the show, it's organized chaos.

"What's choreographed onstage is [just as] choreographed backstage — where you shouldn't be, where you should be. You're dodging balls, because it's a well-oiled machine," she says. "It's quite fascinating when you have 15 people back here, just passing right, left, up, down, you know, carrying big dresses, [with] set pieces coming in."

Once the show starts, Kopko is constantly in motion to help Osnes change costumes in the wings. And sometimes she has to improvise and fix things on the fly.

"Actually, one of her costumes did come apart," Kopko says. "And at the last minute ... I literally grabbed a hairpin and I re-rigged it. She was running, coming offstage to change — I had it in my hand, and I was like, 'Whew.' So you have to be quick on your toes."

In The Rush To The Tonys, A Late Glut For Theatergoers

Ivey Long, who's already got five Tony Awards on his shelf, loves the whole process of creating and maintaining costumes for Broadway — making polyester look like silk and making it possible for a whole chorus to transform from peasants into noblemen in a minute.

"It's a total science; it's a total art," he says. "And altogether, you're not supposed to know any of this has happened."