Accessibility links
Making The Switch: An American Woman's Journey To Islam Karen Danielson was raised Catholic, but she became a Muslim when she was 19. The conversion came with some difficult personal decisions, but she stresses the shift was spiritual, rather than cultural. 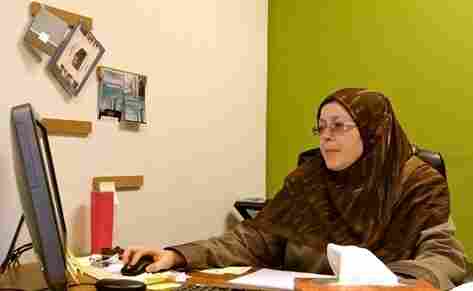 Karen Danielson, who was raised Catholic, converted to Islam 30 years ago. Courtesy of the Muslim American Society Chicago hide caption

I have met women who weren't Muslim and they've married a Muslim man, and they've ended up converting. But it's a rare bird who just does it for her husband's sake.

Karen Danielson converted to Islam three decades ago, was she was 19. She was raised Catholic, and then later became a Baptist and enrolled in a Baptist college, where she picked up the Koran. Now, she's the director of outreach at the Chicago chapter of the Muslim American Society.

Her experience is not as unusual as it may seem; some 20 percent of American Muslims are converts. Leaving one religion for another can be a complicated process for anyone, but in the United States converting to Islam can mean making some especially difficult personal choices, at least for some people. That was the case for Danielson.

Do you judge Muslim women who wear headscarves? Tell us on Weekend Edition's Facebook page or in the comment section below.