Accessibility links
Report: Patricia Volk, Author Of 'Shocked: My Mother, Schiaparelli, And Me' Both Elsa Schiaparelli and Audrey Morgen Volk loved clothing. They were also strict, impatient and volatile. In her memoir, Patricia Volk describes how an iconoclastic, Italian fashion designer and a loving, perfectionist mother helped her move into adulthood. 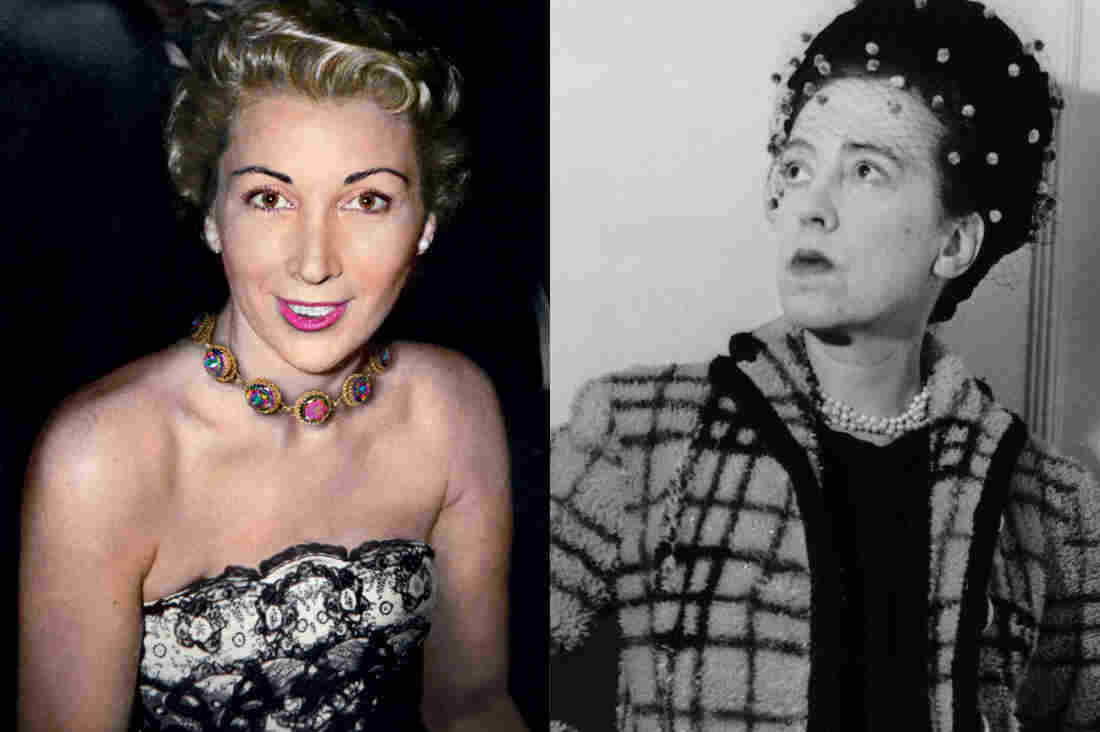 If you walked into New York's Morgen's Restaurant in the 1950s, you'd be greeted at the door by a perfectly dressed and powdered blonde who'd smilingly show you to your table and hand over a menu. That hostess, Audrey Elaine Morgen Volk, is at the center of her daughter Patricia Volk's new memoir, Shocked: My Mother, Schiaparelli, And Me. In it, Volk describes how two vivid women helped her move into adulthood: One was the iconoclastic Italian fashion designer Elsa Luisa Maria Schiaparelli; the other was her mother, a loving, difficult and icy stunner. 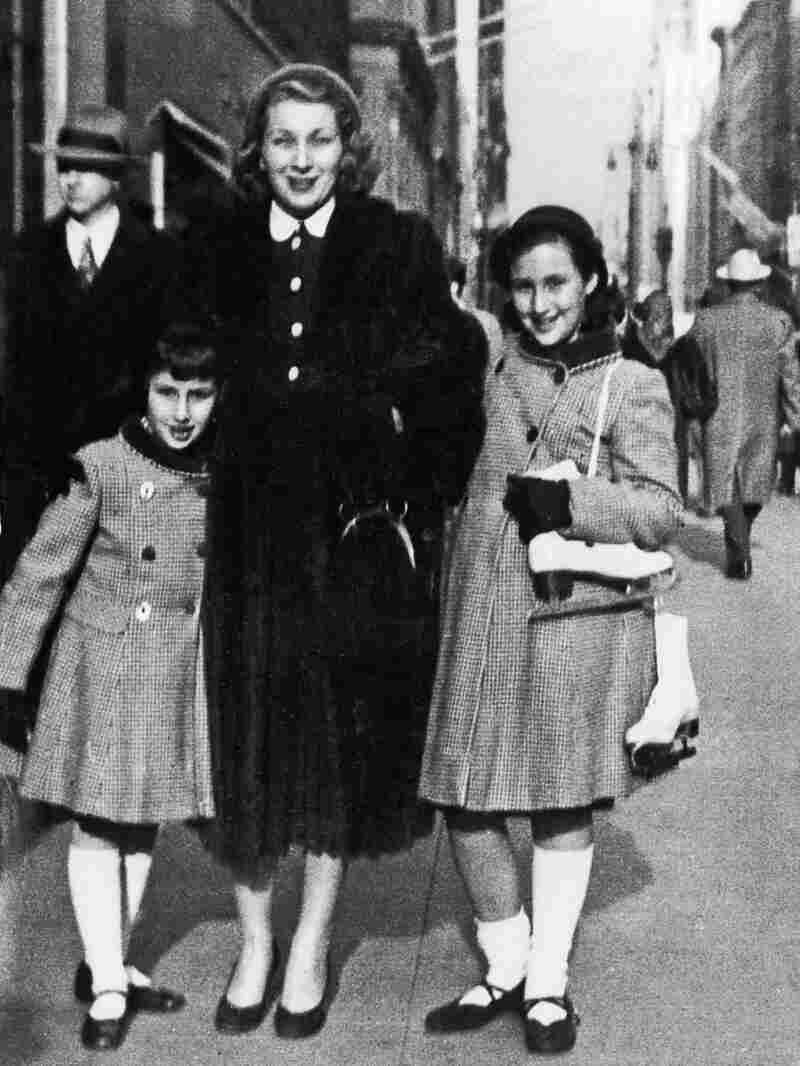 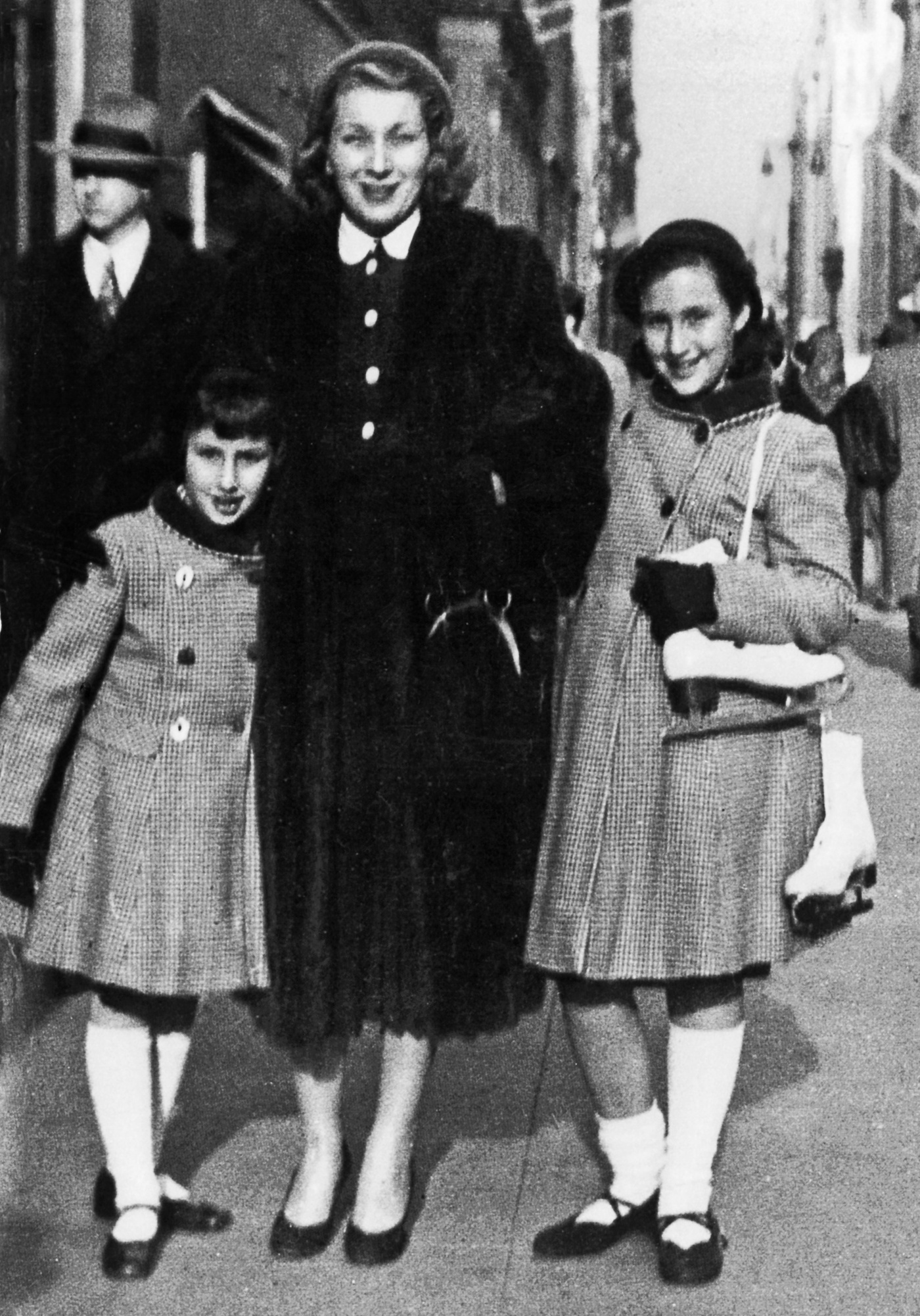 Patricia Volk (left) poses with her mother, Audrey, and her sister, Jo Ann, outside Rockefeller Center in New York.

A Tale Of Two Beauties

Volk's father thought his wife was the most beautiful woman in the world. Every year on her birthday, he gave Audrey the same present: a bottle of perfume called Shocking made by Schiaparelli.

"And he would make the gift wrap himself out of as many $100 bills as it took to get the job done," Volk remembers.

The perfume was one connection between Audrey, her daughter and Schiaparelli. According to Dilys Blum, who curated a Schiaparelli show at the Philadelphia Museum of Art in 2003, there's at least one other connection.

Volk says her mother "had a vanity table in her bedroom that was entirely constructed of mirrors, even the drawers and the legs and the stool that she sat on. And on the top, there was a triptych of mirrors, and she could look straight ahead and just see herself head-on, or she could glance side to side and see her profile."

At that vanity table, little Patty Volk watched her beloved mother pin back her hair, dip three fingers into a jar of cold cream, and smear the cream on her cheeks.

and tissues off the Pond's. Here she sometimes pauses, meets my eyes in the mirror and says, "Never let a man see you with cold cream on your face." 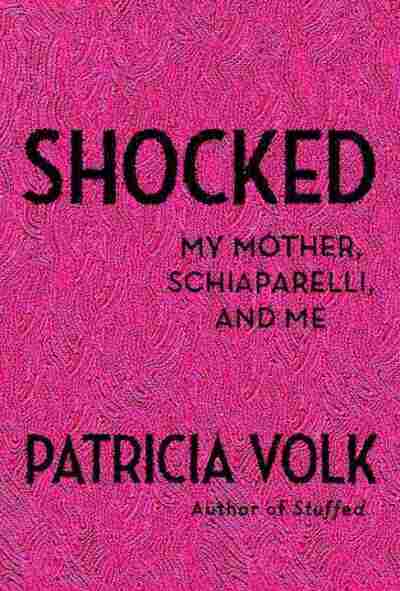 Schiaparelli, on the other hand, was short and imperfect. A series of moles scattered like the Big Dipper down her cheek. But Dilys Blum says that didn't stop Schiap (her nickname).

"Anything she was self-conscious about, she exploited," Blum says. "I think she brought chic to ugly; she made the most of her minuses."

The beautiful Audrey was fascinated by Schiaparelli, and avidly read her 1954 memoir, Shocking Life. Audrey's daughter Patty devoured the book, too, and found it transformative.

"I was absolutely riveted, because here was a woman who was very much like my mother," Patricia Volk says. "She cared about clothes; she was very strict; she was impatient; she was volatile. And yet she did so much more with her life than I felt my mother expected me to do, and than my mother did with her life. My mother could have been anything."

Growing Up With Perfection

Audrey was quick and smart. When she skipped two grades, the much older classmates ostracized her. Volk wonders if that cruelty may have fueled her mother's perfectionism. Growing up as perfection's loving child, Volk asked herself, "What do you do when you're little and you know you can't be like your mother?"

"I knew that I was never going to be the kind of beauty that my mother was. I have the kind of face that if people are lost, they stop me to ask directions," she says. "You would never have stopped my mother. First of all, she walked with her chin up, so in a way it was a way of saying, 'Stay away.' "

Audrey's beauty was a shield, and it took Volk years to realize that as a daughter she could be different; she could help strangers, have flaws and still be all right. Her mother's definition of all right? Never good enough.

When Audrey did reach out to others, she'd sprinkle them with rules, pointers and tips on self-improvement. Volk imagines what advice her mother would have had for Schiaparelli: 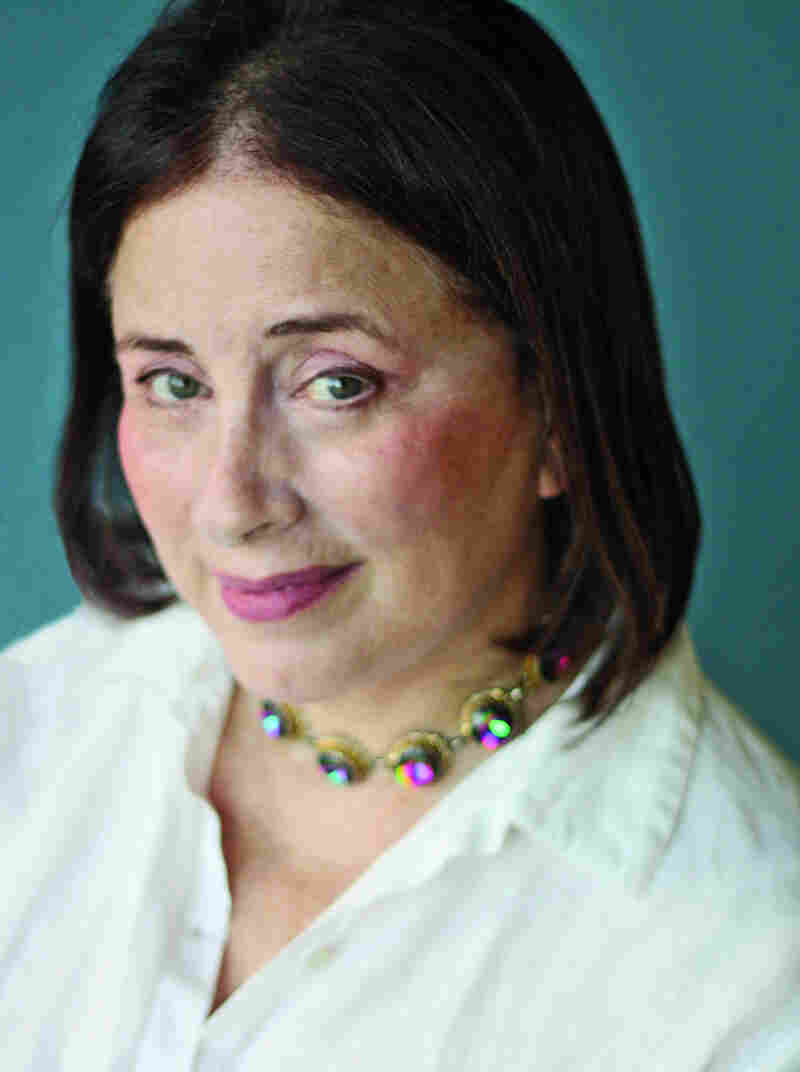 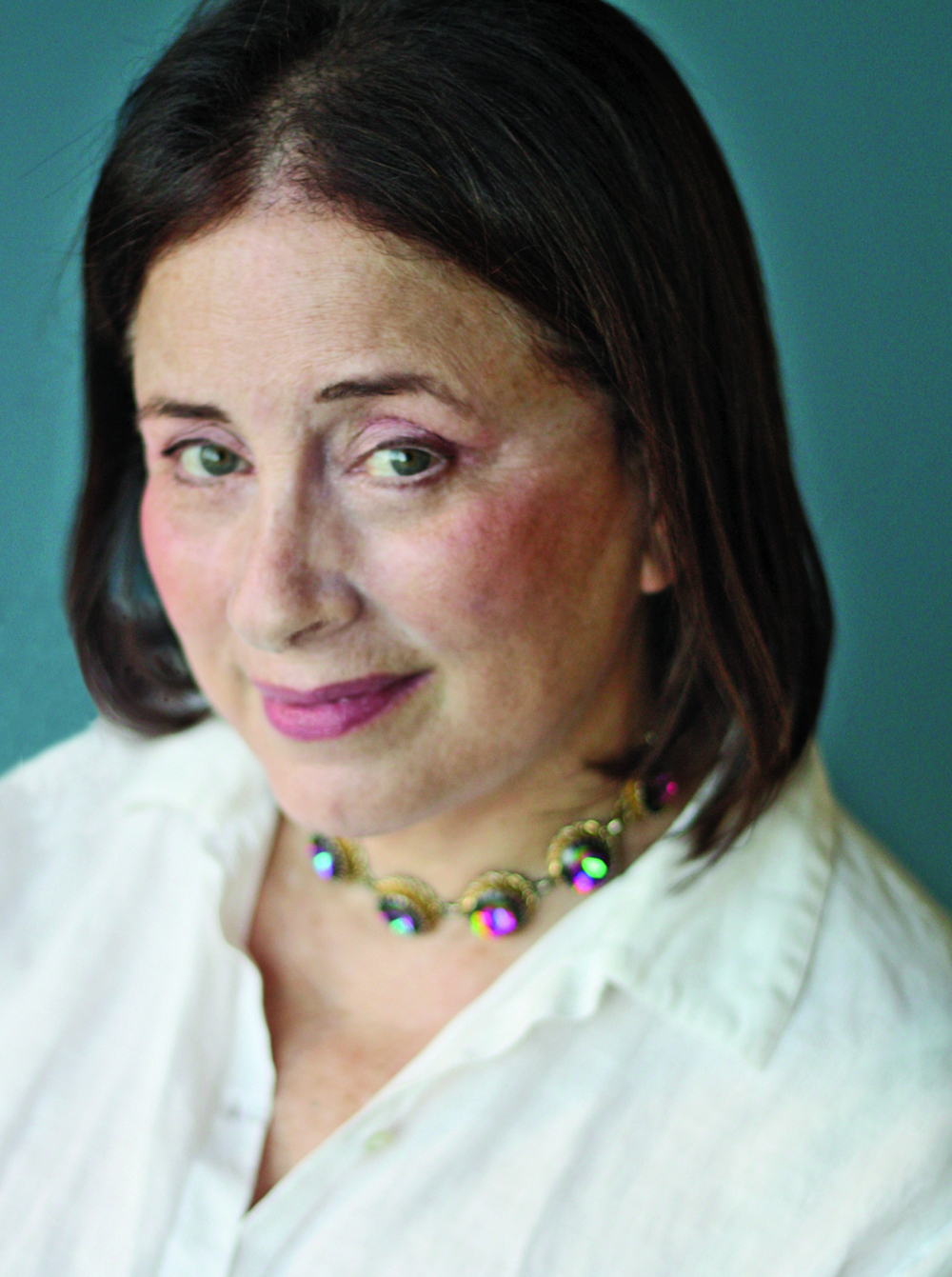 Patricia Volk is an essayist, novelist and memoirist.

"I think she would say, 'Darling, get a good dermatologist. You don't need those moles.' And then she would say, 'I know a very, very good orthodontist. He can push those teeth back in months. And those big bags under your eyes, sweetheart, really get a good cover stick. Those purple bags aren't doing a thing for you.' "

Volk doesn't know who would win in such an imperious standoff, but Blum thinks Schiaparelli would have given it right back to Audrey, told her how to dress or just to buzz off.

Volk's memoir is a portrait of an adored, demanding mother who was hemmed in by the norms of the '50s and resolutely inflicted those norms on her much-loved daughter. When that daughter was all grown up and married with children of her own — Peter first, then Polly — Patricia Volk recorded her mother for various writing projects, and then just to have her voice. In one interview, taped in Audrey's Florida kitchen, Volk asked her mother about the first time she saw her grandson, Peter.

"Most beautiful child I ever saw in my life," Audrey replied. "I didn't think they made children that beautiful. Couldn't believe it, that you would have that kind of luck to have that kind of a child. He was so gorgeous and sweet. Other kids were scrunched up, ugly, crunching their little fists. Not Peter."

Audrey Volk died in 2005 at an age she never told. But she lives on, vividly, in the pages of her daughter's book.