Accessibility links
Rail Project At Los Angeles Port Draws Environmentalists' Ire In California, activists and environmentalists are seeking to halt construction of a new $500 million rail yard next to the Port of Los Angeles. Activists say the massive project would mean even more pollution for nearby neighborhoods that already have some of the worst air in the country. 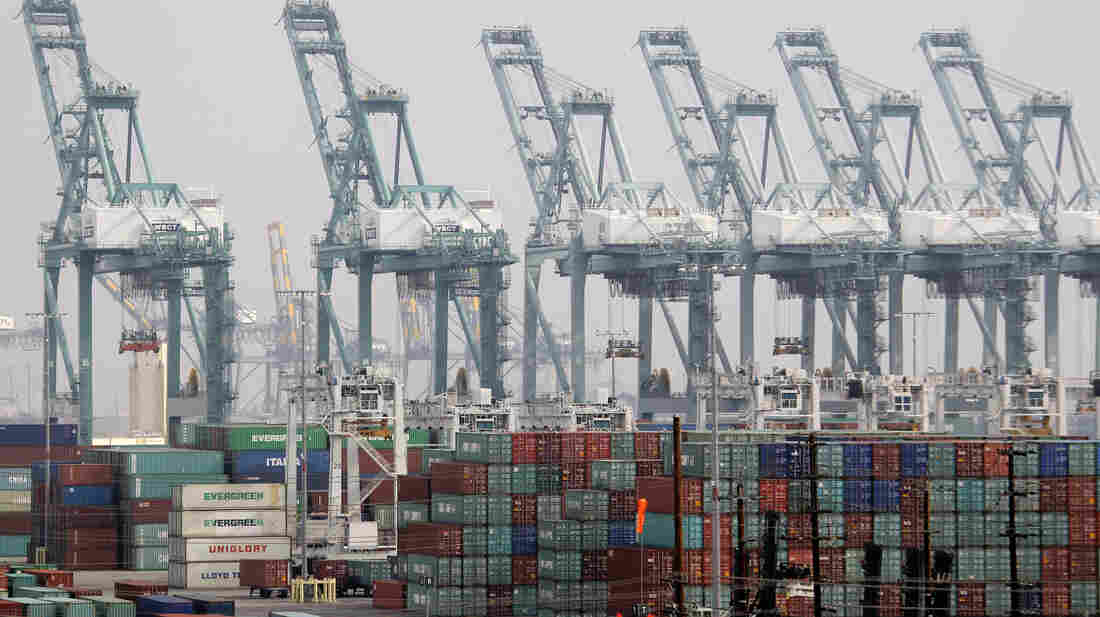 In California, a high-profile lawsuit is seeking to halt construction of a new $500 million rail yard next to the Port of Los Angeles. Activists, including a national environmental group that's spearheading the opposition, say the massive project would mean even more pollution for nearby neighborhoods that already have some of the worst air in the country.

The planned Southern California International Gateway is part of a multibillion-dollar effort that aims to ensure that L.A.'s sprawling port doesn't lose business once the expansion of the Panama Canal is completed.

Combined, the side-by-side ports of Long Beach and Los Angeles handle almost half of all the consumer goods shipped into the U.S., and this clearinghouse of globalization takes up a lot of real estate.

Drive over the Vincent Thomas Bridge and stacks of blue and red cargo containers stretch for miles in every direction.

"Of course, when you come over the bridge it is unbelievable. We have so many terminals here," says Wally Baker, who is spearheading an effort with local unions called Beat the Canal. Job No. 1 is to get a new rail yard built a few miles east of the docks.

"We have a huge amount of capacity, and you would think that's going to be enough, but the reality is, it won't be enough." It's not enough, he says, to compete with a wider Panama Canal, which industry analysts say could send about 20 percent to 30 percent of the Port of L.A.'s business to the Gulf and East Coast.

"That's a big advantage — that you can take stuff off the ship, have it there in a couple of hours, build a train and go to Chicago, and you don't stop," Baker says.

Right now, most cargo has to be trucked offsite to rail yards 25 miles away, and in some cases, farther. "Sometimes when the traffic's terrible, we have to drive three, four hours to come back from San Bernardino to here, to the L.A. port," Baker says.

Jose Machuca is one of the thousands of truck drivers who move the freight from the ships to those rail yards every day. He thinks a new rail yard closer in is a good idea because shorter trips would mean fewer hours stuck in traffic and more money in his pocket.

But where people like Machuca or Baker see commerce and the potential for new jobs, others see a much bleaker scene if the rail yard gets built.

There are predictions that the rail yard would add up to 5,000 new truck trips a day, belching more diesel exhaust into air that's already polluted by ships, power plants and oil refineries. And that's at the heart of the lawsuits to stop the project.

"When something's wrong, you gotta stand up and say, 'This is wrong. We cannot allow it to move forward,' " says Angelo Logan, who runs a group called East Yard Communities for Environmental Justice. The group is joining with the Natural Resources Defense Council in one of the court challenges. He isn't buying the port and the city's promises that the new rail yard will be a green facility and help reduce pollution.

"It's like saying, 'Don't worry about it. It's a cigarette, but it's a filtered cigarette,' " Logan says.

Exhibit A for the opposition's case: West Long Beach, which lies just a couple of hundred yards from the proposed site. The working-class neighborhood is a mix of African-Americans and immigrants from Mexico. Here, health studies have long found alarmingly high rates of asthma and cardiovascular disease.

At the Westside Christian Church, Veronica Guerrero, the wife of the pastor here, says she and her neighbors are well aware of the risks of living downwind of all this industrial activity. "But on top of that, we have this project that are trying to get closer to the neighborhoods than they already are. And that really bothers me. That really worries me," she says.

Whether the port can stay competitive is not Guerrero's concern. Guerrero says she and many of her neighbors feel powerless. Backers of the rail yard project, she says, can't appreciate their situation. "I have heard other arguments like, 'If you don't like it here, why don't you leave?' It's not that easy," she says.

So you've got locals talking about environmental justice, and the businessmen and unions talking about economic growth. And both sides have their own studies that show pollution increasing or decreasing if the rail yard gets built. One of the only certainties at this point is that the lawsuits will slow everything down.

And back at the Port of Los Angeles, Wally Baker says that sends the wrong message. "That it takes eight years or 12 years to get your project in place, and that somebody can sue you even though you did everything they wanted to do. You spent $40 million, and then somebody still wants to sue you," he says. "That's a really bad message."

Even without a court battle, the proposed $500 million rail yard wouldn't be built in time for the expected opening of the widened Panama Canal. That's scheduled for later next year, just about the time the Los Angeles project hoped to break ground.