Accessibility links
Spotlighting Background Singers In 'Twenty Feet From Stardom' Filmmaker Morgan Neville's new documentary chronicles backup singers who have supported some of the biggest acts in music history, from Ike and Tina Turner to The Rolling Stones and sung some of pop music's catchiest hooks. 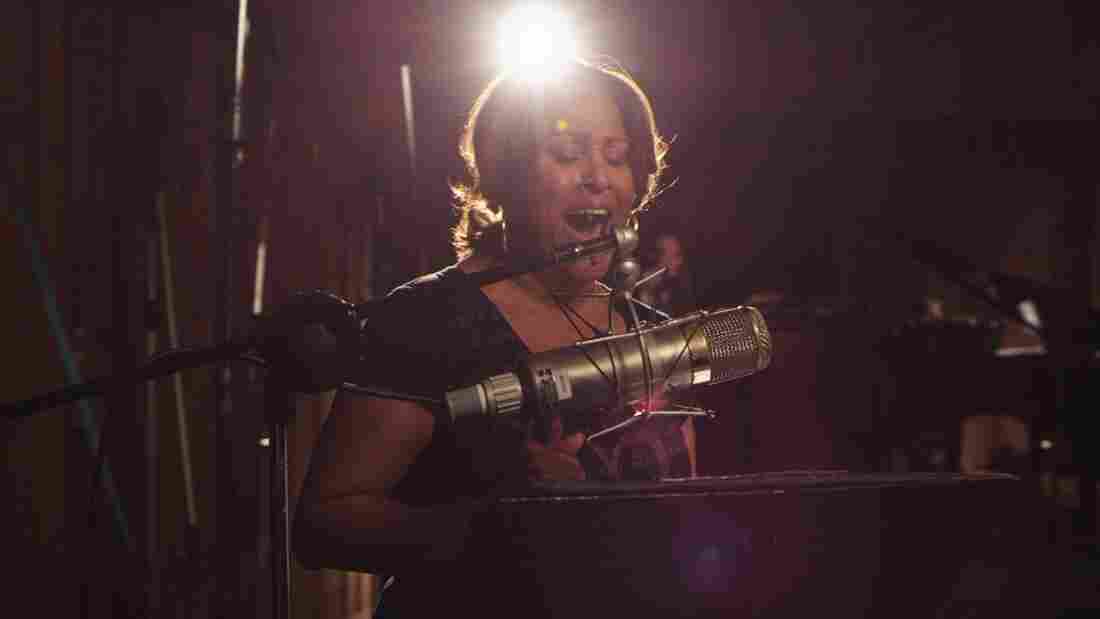 Darlene Love, one of the background singers featured in Twenty Feet From Stardom, didn't receive credit for singing hits in the 1950s and '60s and says her career was derailed by legendary producer Phil Spector. Radius/TWC hide caption 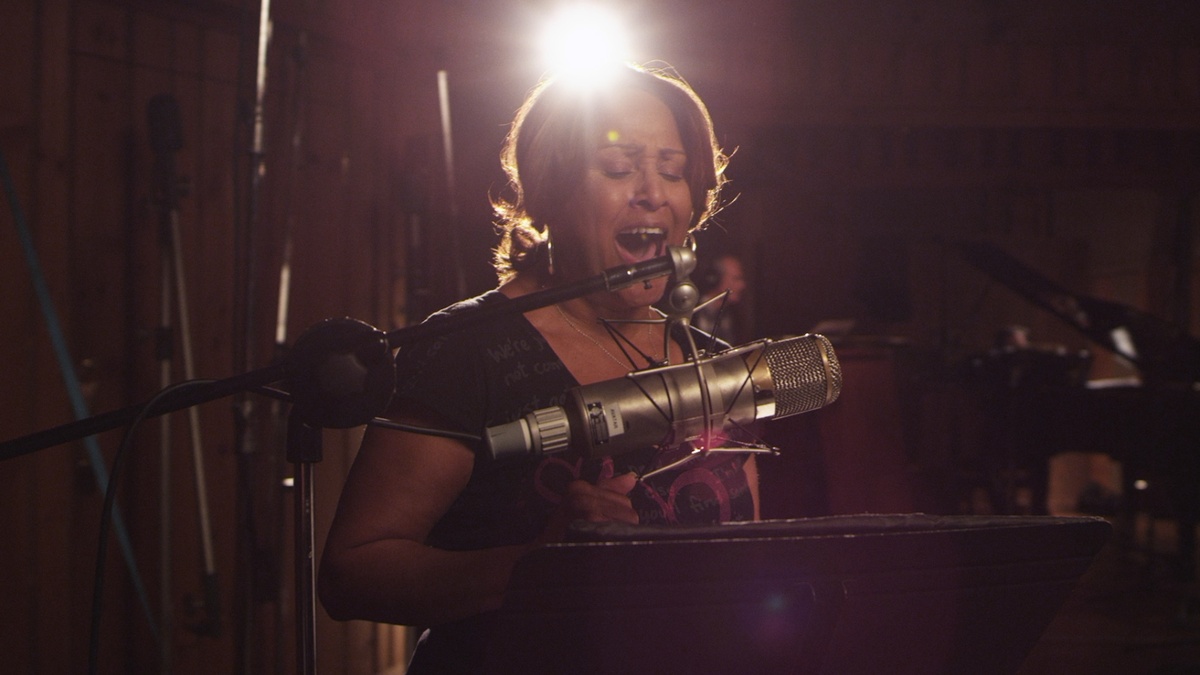 Darlene Love, one of the background singers featured in Twenty Feet From Stardom, didn't receive credit for singing hits in the 1950s and '60s and says her career was derailed by legendary producer Phil Spector.

Twenty Feet from Stardom, filmmaker Morgan Neville's new documentary, is a reminder that most of pop music's catchiest hooks, riffs and refrains were sung by voices harmonizing in the background. Neville says he wanted to put backup singers — black, female and honed in church — front and center.

"I was really more interested in people who were voices for hire," he says, "who were able to walk into sessions never knowing what they had to do and could bring it."

Bring it like Merry Clayton did for The Rolling Stones. In the documentary, she talks about going into the studio at 2 a.m., very pregnant with curlers in her hair, to add a kick to the iconic lick in "Gimme Shelter."

"I was gettin' ready to go to bed," she recalls. "We got a call. 'Merry, there's a group of guys in town called The Rolling Somebody's, and they're from England. They need somebody to sing with them.' They picked me up with silk pajamas on, a mink coat and a Chanel scarf on my head."

Clayton got a shot at stardom, but it never panned out. The film is filled with such heartbreak stories.

Darlene Love was the voice for hits credited to other singers in the 1950s and '60s — her career derailed by producer Phil Spector. In the documentary, she says she was so discouraged, she gave up music for many years.

"The only thing I thought I could do and make a little money to survive was I started cleaning houses," she says. "Yes, the great Darlene Love is cleaning houses."

The film shows stars like Bruce Springsteen, Stevie Wonder and Mick Jagger singing the praises of their backup singers, and Sting talking about making it in the music industry.

"It's not a level playing field," muses Sting. "It's not about fairness, not really about talent. It's circumstance, it's luck, it's destiny."

Claudia Linnear, who's in the film, says all of the stories are bittersweet.

"Most of us were always bubbling under," she said when she came to visit NPR West.

Her story starts out in the 1970s when she was a teenaged Ikette in the Ike and Tina Turner Revue.

"Bam! We hit the floor running and you just better catch up or fasten your seatbelt," she remembers. "As soon as that curtain went up we were flying and singing and shaking. You just screaming, but make sure you're on key, because if we weren't, believe me, Ike was giving us the evil eye."

Soon, she was touring with Joe Cocker, posing for Playboy and partying with David Bowie and Mick Jagger, who co-wrote the song "Brown Sugar" in her honor.

"Ya know, that's what people say," she laughs. "But why didn't they write a song for me to sing? That would have made all the difference ... and why I dropped off the map. Because if you're not a songwriter yourself, a lot it does depend on the right material."

Linnear did get to record a solo album. It went nowhere. She had a daughter to support, bills to pay. And she got fed up with the rock 'n' roll lifestyle.

"After a while it seemed more about getting high instead of making music. I did my share, but enough's enough," she says. "I got tired of stepping over people passing out in my house, and one day I told them, 'Here's your hat and coat.' Then I closed shop and remembered the things I was trained about in college and took that path. That's where I dropped off the radar.

She's been quietly teaching Spanish grammar at a small southern California college for the past 30 years.

"Most of my students didn't know but through the grapevine found out," says Linnear. "They say, 'I Googled your name last night and all this stuff came up. You sang with so and so.' Oh, boy, here we go."

Lisa Fischer got a little closer than 20 feet to stardom — she won a Grammy for her 1991 hit "How Can I Ease the Pain." But she says she found a solo career frightening.

"What didn't feel safe to me was the business aspect of it, the chess moves: it's strategic. This is war. All those things made me crazy," she says. "I just wanted a relationship with the music. And it just scared me too much, and I wasn't ready." 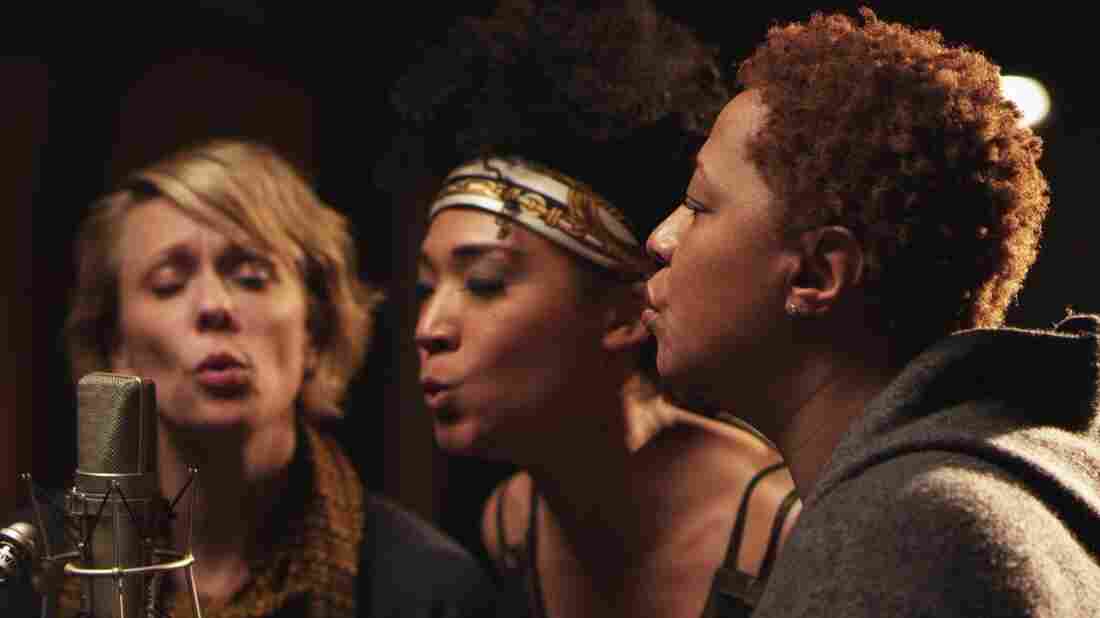 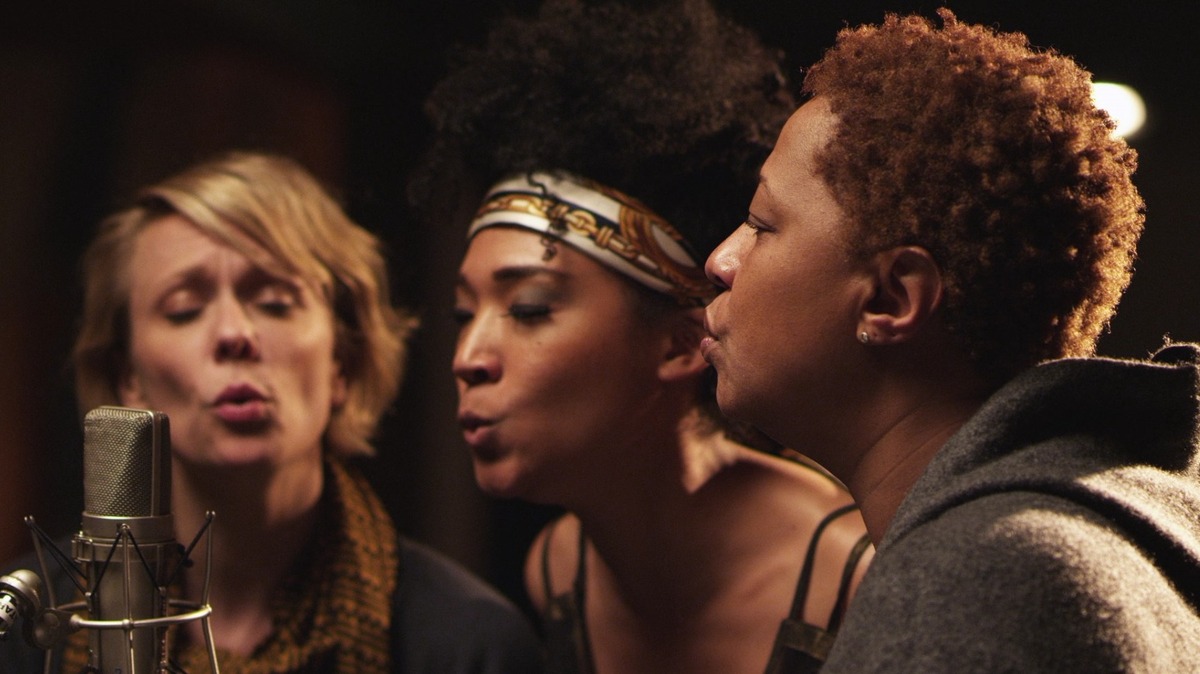 Jo Lawry, Judith Hill and Lisa Fischer are three of the backup singers featured in Twenty Feet From Stardom.

Fischer prefers singing backup, and she's sung with just about everybody from Luther Vandross (himself, once a background singer) to Chaka Khan to Sting. She's on the road now with The Rolling Stones.

"I think background singing is like being cradled, like being loved and supported," she says. "It's sacred to me."

Fischer says some people feel like singing background is akin to being a second-class citizen, but she likens it to sides of a tuning fork, blending and harmonizing voices together. The singers are often asked to improvise how they meld their voices with the lead singer.

Judith Hill says background singing, "adds so much charm to the record. You can feel it when you've got group of singers. It adds a whole other quality rather than one person tracking million times."

At 29, Hill represents the newest generation of background singers in the film. She was to duet with Michael Jackson on his comeback tour, which was cancelled by his death.

"That shook me a really long time, to be in rehearsal with the King of Pop the night before, then to see he's not with us," she says. "It was really, really hard."

Hill sang at Michael Jackson's funeral and on a world tour with Stevie Wonder. She also recorded the entire soundtrack to a Spike Lee movie. Just before the documentary premiered at the Sundance film festival, Hill decided to enter the TV singing competition, The Voice. She was considered the frontrunner, but two weeks ago, the audience voted to eliminate her from the finals.

"Everyone's like, 'Man, I'm so shocked,'" Hill says. "It seems now it's a country show. Middle America was watching the show that day. The demographic's different from my audience."

Now, Hill says she's determined to make a career with her own music.

"It's such a hard business, it's really hardcore," she says. "Now I wanna release an album, I wanna tour as much as possible and maybe something wild and crazy comes up again. But I think the key is to stay active and stay visible."

Hill says she learned that to make it big, a great voice alone is not enough. But she's already had more exposure than her predecessors had when they were starting out. Director Neville says he hopes Twenty Feet from Stardom brings success for all the featured background singers, like what The Buena Vista Social Club did for previously little known Cuban musicians. And his film asks a basic question about what stardom means.

"Who wants to be famous? Some do, but it's not the end all, be all," he says. "In a strange way, the people in our film may be having opportunities they didn't have in their careers because of the film, which is amazing."

Merry Clayton's solo recordings are being reissued to coincide with the movie. Darlene Love's biography was was recently re-released. Even Claudia Linnear says she's inspired to begin singing again. There's talk of a comeback tour for the stars of the documentary.

And when they were at NPR West, Claudia Linnear, Lisa Fischer and Judith Hill had another shot on the mic, when I asked them, on the spot, to sing the Morning Edition theme with me: "I hate to wake up in the morning/Please just let me sleep this morning/Let me stay in bed/And rest."