Accessibility links
Massive Bat Cave Stirs Texas-Size Debate Over Development Every night for thousands of years, bats have poured out of the Bracken Cave Reserve, near San Antonio, by the millions. But conservationists are worried that plans for a housing development nearby will disrupt the bats' rural habitat. 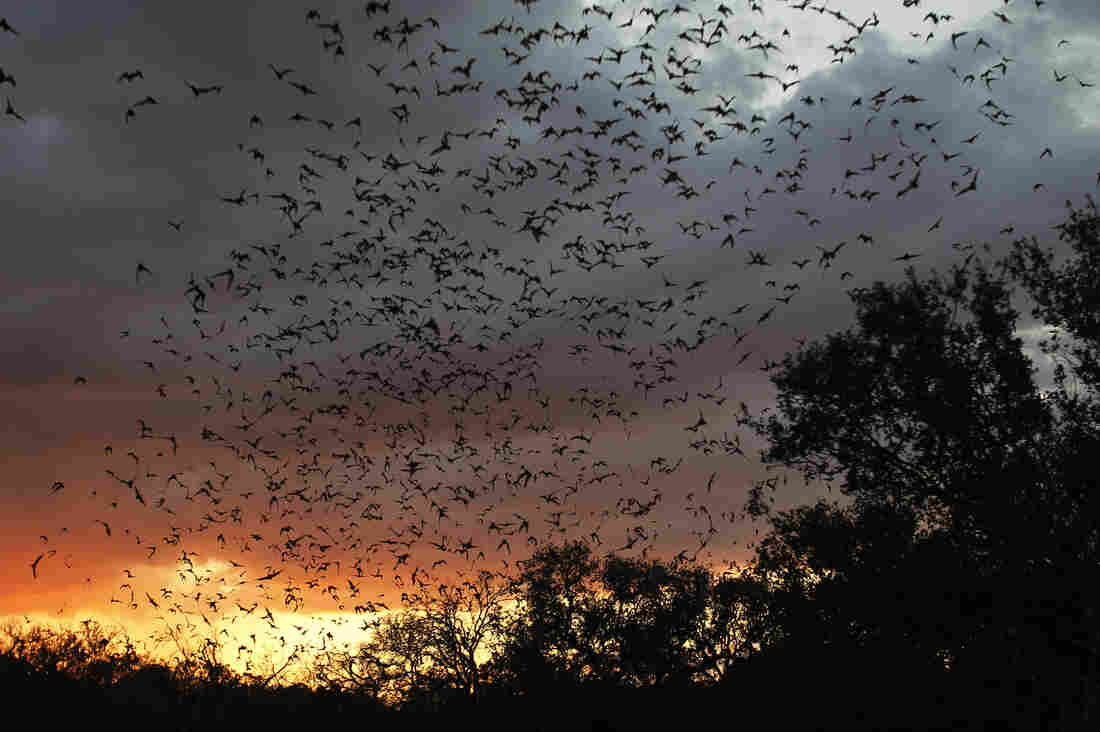 Millions of bats emerge from Bracken Cave, near San Antonio, in 2011. The cave is located in a rural area, but conservationists are worried that a planned housing development nearby will disturb the bat colony that lives here. Eric Gay/AP hide caption 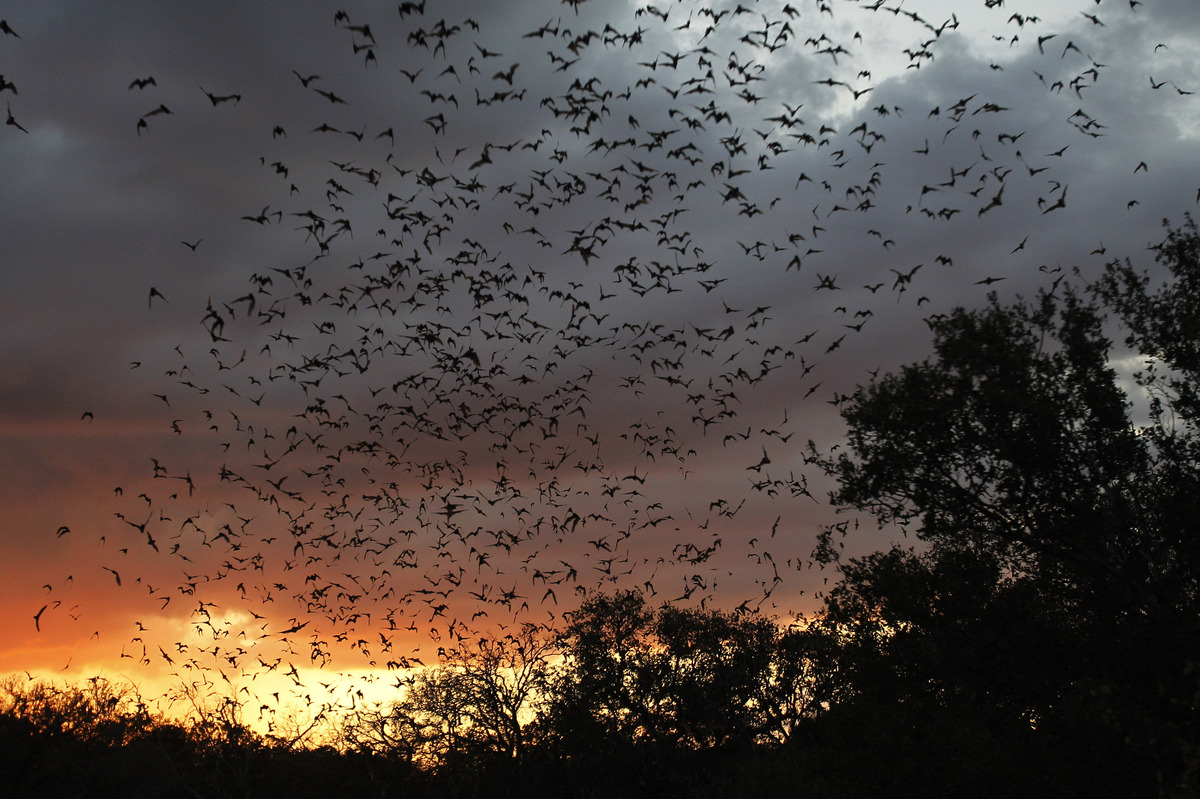 Millions of bats emerge from Bracken Cave, near San Antonio, in 2011. The cave is located in a rural area, but conservationists are worried that a planned housing development nearby will disturb the bat colony that lives here.

The Bracken Bat Cave, just north of San Antonio, is as rural as it gets. You have to drive down a long, 2-mile rocky road to reach it. There's nothing nearby — no lights, no running water. The only thing you hear are the katydids.

The cave houses a massive bat colony, as it has for an estimated 10,000 years. Bat Conservation International, the group that oversees the Bracken Cave Reserve, wants it to stay secluded, but the area's rural nature could change if a local developer's plan moves forward.

Andy Walker, BCI's director, doesn't understand why there's any discussion about building a nearly 4,000-home subdivision right next door. The proposal, he says, "really instills an even deeper sense of stewardship for this land and these bats."

It's 100 degrees or so on a recent afternoon, and the hot air near the cave carries a pungent smell of ammonia — bat waste. The cave is at the bottom of a valley and it has a wide, open mouth.

Around sundown, the first of 10 million bats begin to emerge from the cave. Thousands fly in a vortex in the valley at a time, forming a black streak over the sky. If you listen closely, you can hear their flapping wings, which sound like a steady, gently falling rain.

"This is really a ballet, watching these bats come out of this cave in these millions of numbers, never once bumping into each other," Walker says. He's worried about the fate of these bats if the housing project is approved.

The land for the proposed subdivision is just to the south, directly under the bats' typical flight path. San Antonio developer Brad Galo, who bought the property several years ago, had kept quiet about his plans. But they became public in March, when the San Antonio Water System board approved a contract for water and sewer service there.

Annalisa Peace, executive director of the Greater Edwards Aquifer Alliance, a group that fights for the area's underground water source, says the proposal is "crazy." She believes the subdivision will ruin a natural treasure.

"I can't tell you why they want to build over it, but I can tell you our aquifer is a world-class aquifer," Peace says. "It's amazingly prolific ... but that also makes it extraordinarily vulnerable to pollution."

Although the planned subdivision has its critics, the Water System's Greg Flores defends conservation efforts to keep the bats safe. He says the utility and the Aquifer Alliance have purchased hundreds of acres of land around the bat colony for conservation.

One major consequence of the proposed development could be on Texas agriculture. Bracken Cave coordinator and tour guide Fran Hutchins says the bats, which eat tons of bugs, save farmers money.

"This colony alone is going to eat 100 tons of insects every night," Hutchins says. "Their primary food [is] agricultural pests, so those insects are very harmful to local farmers."

So far, no master plans have been submitted to San Antonio's development department, and Mayor Julian Castro says there's been no decision whether the housing project will move forward. "There is a science to figure out in terms of whether development would or would not actually harm the bats," Castro says.

Environmental advocates are taking Castro at his word. "You'd like to think, also because this is Texas, where there is a will, there is a way," says BCI's Walker. "And people have good horse sense here and we can figure out a solution to this."

But that delicate dance between progress and conservation may prove even more complicated than the nightly flight of the Bracken colony's bats.