Accessibility links
Movie Review - 'This Is The End' - Apocalypse Or No, It's A Hot Party Seth Rogen's new end-of-the-world comedy turns out to be as funny as anyone could have hoped — and maybe more clever than you might have expected. (Recommended) 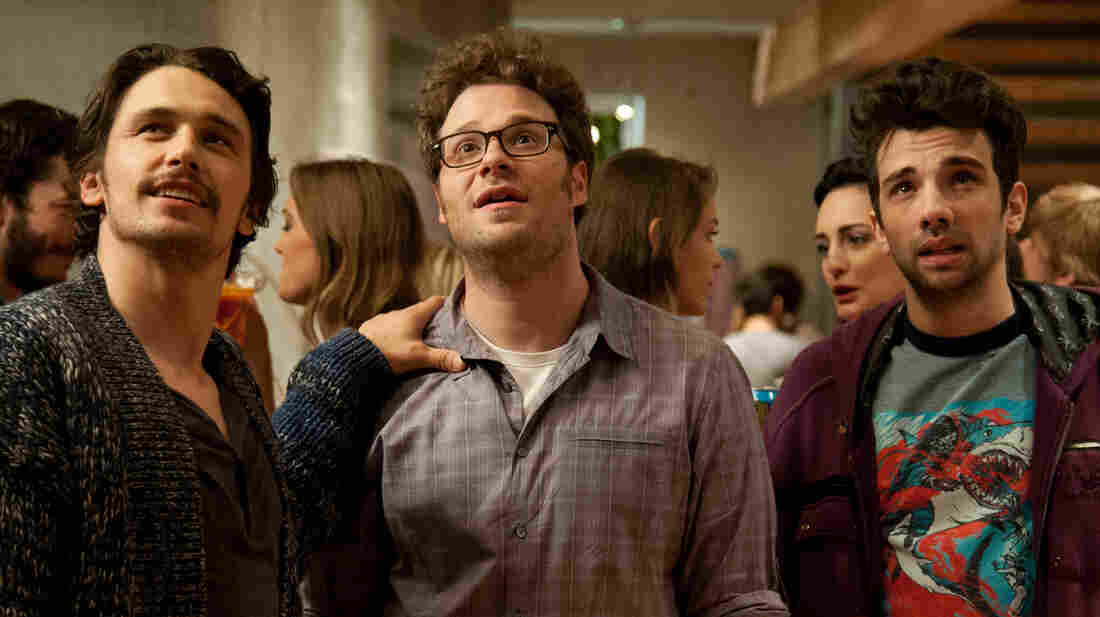 James Franco (left), Seth Rogen and Jay Baruchel are all playing themselves in Rogen's apocalypse comedy This Is the End. Sony Pictures hide caption 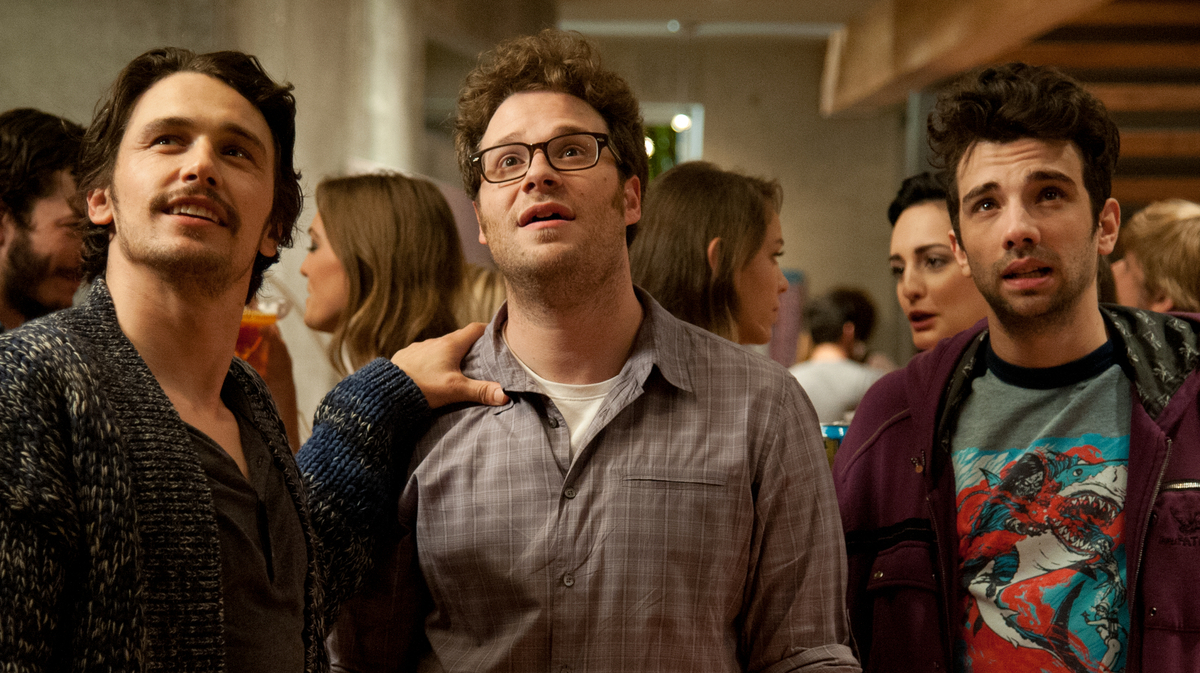 James Franco (left), Seth Rogen and Jay Baruchel are all playing themselves in Rogen's apocalypse comedy This Is the End.

This Is the End

It's A Zombie Invasion

From 'This Is the End' - 'The Power Of Christ Compels You'

The Power Of Christ Compels You

So far, the summer's end-of-the-world movies (After Earth, Oblivion) have mostly been provoking unintended yuks, so it's kind of a relief that this week's offerings include one that actually means to be funny.

That This Is the End actually is funny — well, that's even better, especially as it's playing cleverly enough with form to keep your brain occupied, too.

It opens with actor Seth Rogen waiting at the L.A. airport for his comedian buddy Jay Baruchel. And the first thing you hear is a passerby saying "Hey Seth Rogen, what up?"

That's a cue: Rogen and Baruchel are playing versions of themselves, or at least versions of their public personas. So is practically everyone they know, as we discover when they head to a party at James Franco's house.

Jonah Hill is there, and The Office's Craig Robinson, and Harry Potter's Emma Watson. Mindy Kaling's all hot-and-bothered about Michael Cera, who's grabby and gross and behaving very badly.

So OK, you get the drift, right? Hip young comics partying and poking fun at themselves. Then all hell breaks loose — kind of literally. The ground opens up, swallowing hundreds of celebs, L.A. is basically in flames, with hellfire both raining down and bubbling up, and by the next morning the five remaining guys at the party — Franco, Rogen, Baruchel, Robinson and Hill, as well as interloper Danny McBride — have barricaded themselves inside.

Taking stock of their supplies (loads of alcohol, drugs and salty snacks, plus a single Milky Way), they debate how to go forward (they all want the Milky Way); only then do they turn their attention to figuring out what's going on. Baruchel argues that it all feels awfully biblical, and darned if he's not right.

Once everyone gets tied up in the plot, this glorified slacker flick goes, well, slacker, partly because the whole celebrity-cribs vibe flies out the window when things get special-effects beelzebubbly. That said, Rogen and his pal Evan Goldberg, who co-wrote and co-directed, are clearly having fun giving you the feeling that both celebrity boundaries and filmmaking boundaries are being crossed.

That's a notion they're tapping into, let's note, alongside other filmmakers right now. Sofia Coppola's The Bling Ring invades the homes of real celebrities for a story of teen thieves invading the homes of real celebrities, and asks moviegoers to spend more time in Paris Hilton's closet than they probably spend in their own. (Something made easier by the fact that it looks to be the size of a two-bedroom apartment.) And a veritable who's who of French movie stars play themselves in Alain Resnais' You Ain't Seen Nothin' Yet, a story that has them watching other actors playing parts they once played.

That film is far more interesting in concept, and infinitely more elegant in execution, than what Rogen and his buddies have cooked up in This Is the End -- but I've gotta admit, it's not nearly as funny. (Recommended)