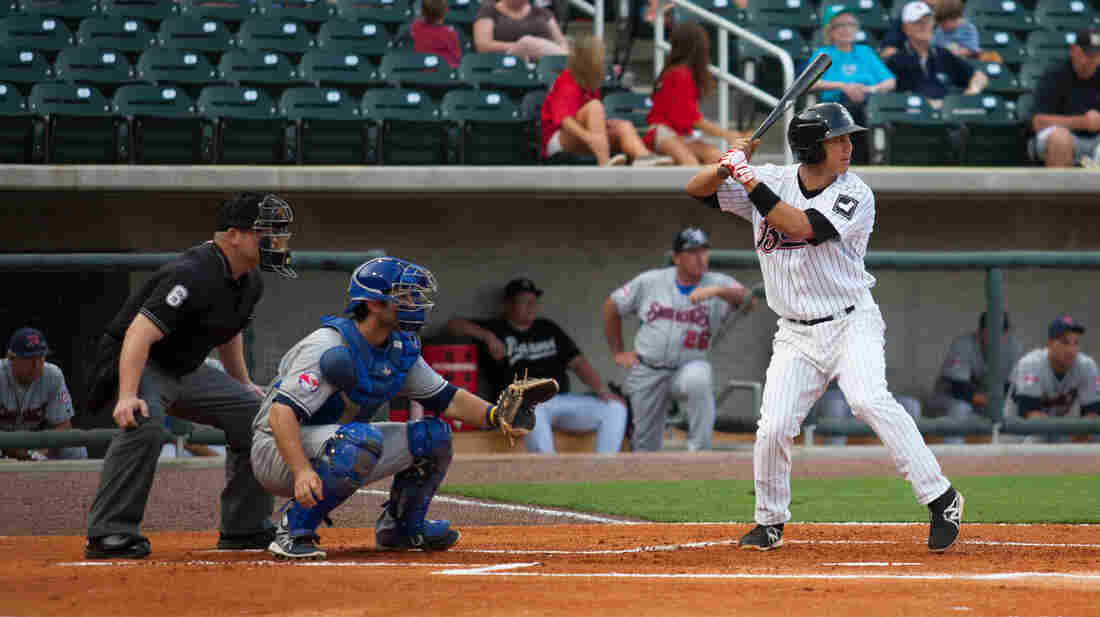 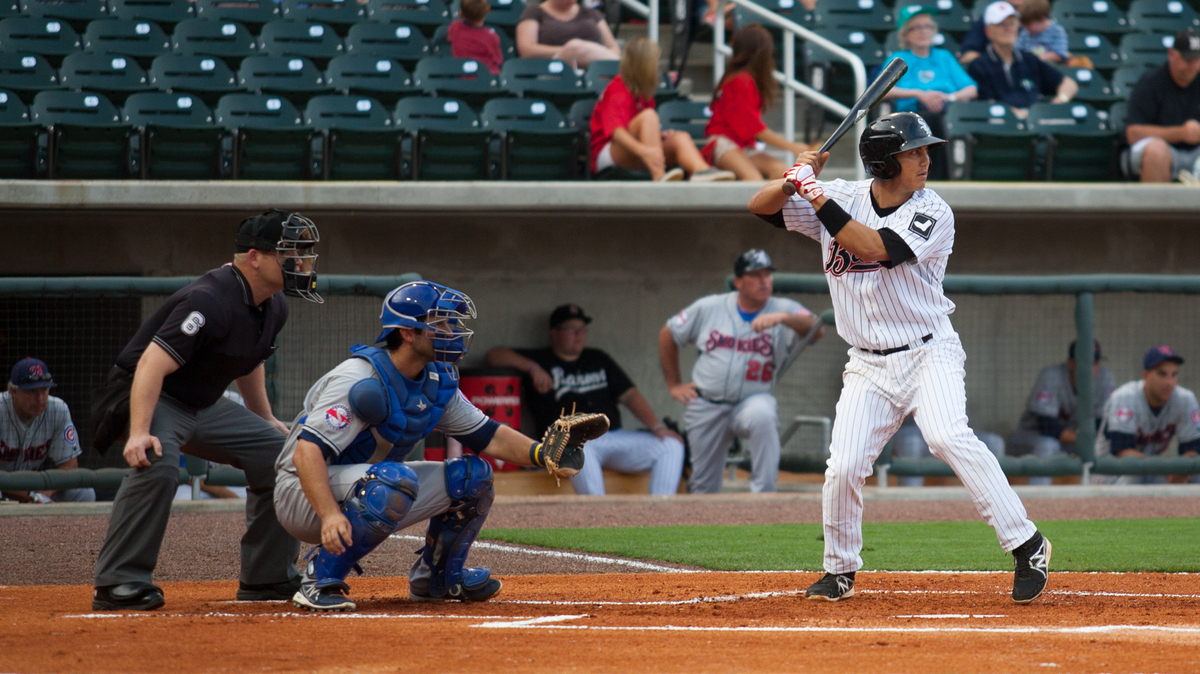 Tyler Saladino, 23, at bat against the Tennessee Smokies on June 1.

Tyler Saladino is one of thousands of minor league baseball players hoping to make it to the major leagues. He plays in Alabama for the Birmingham Barons, the AA affiliate of the Chicago White Sox. Last year, NPR profiled Saladino. But since then, maybe things have changed for the 23-year-old infielder.

One of the biggest changes this year is where the Barons and Saladino play. No longer in the suburbs, the Barons recently opened a sparkling new ballpark right in downtown Birmingham.

The stadium has generated renewed interest and enthusiasm. Attendance is up. Fans are excited. And it's translated to the field: The Barons are in first place in the Southern League, playing some of their best ball in years. While winning is fun, Saladino said that doesn't change his approach to the game.

"Whether it's opening day, middle of July, last game of the season, you're not in the big leagues and your career isn't over," he said, "so you have to work at the stuff you do. You work at your craft day in and day out." 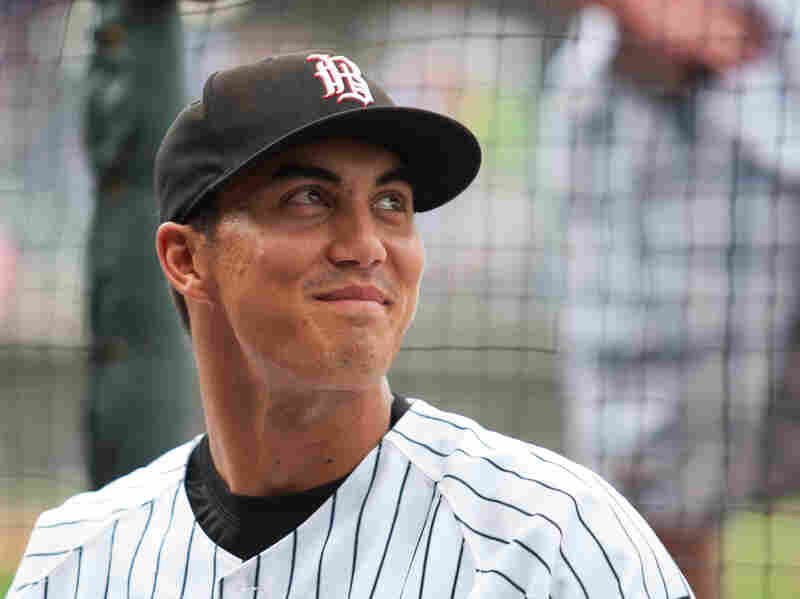 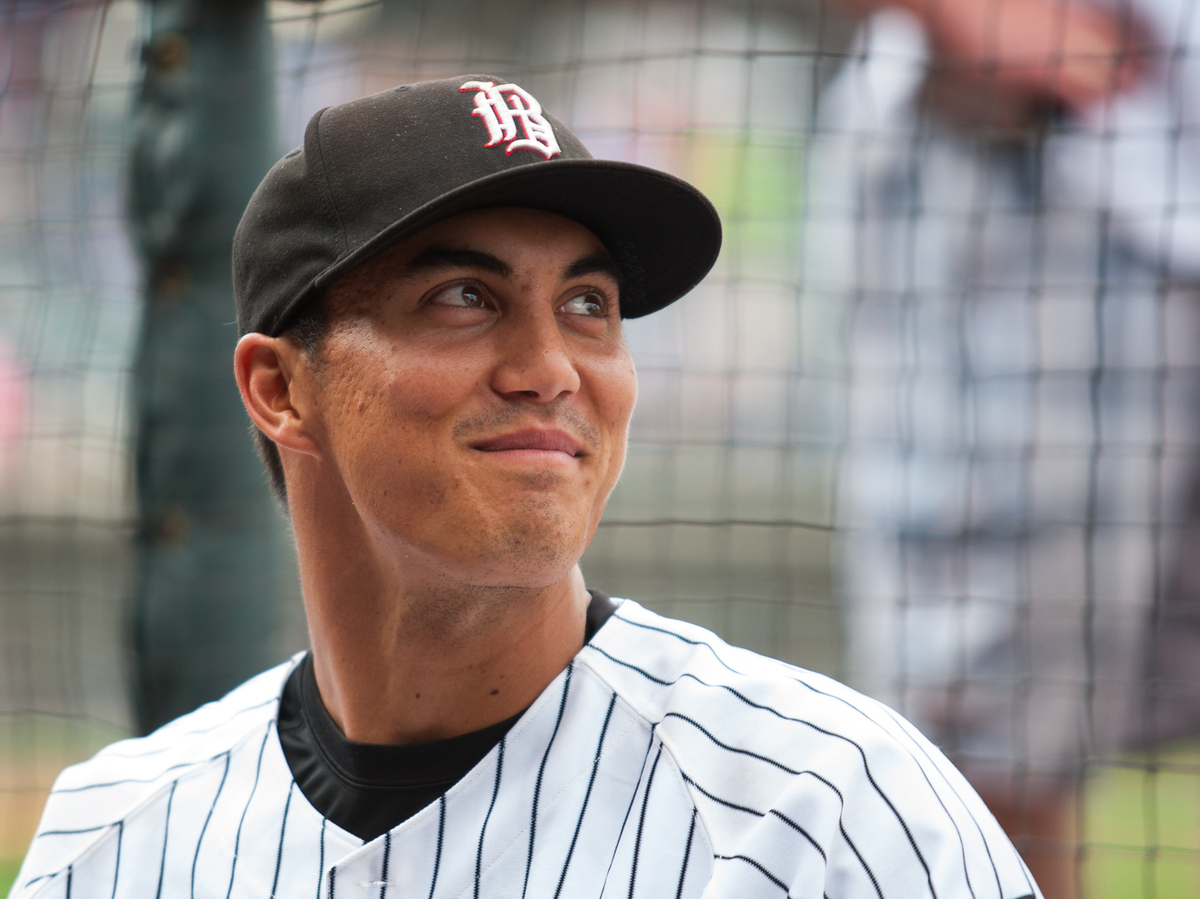 Tyler Saladino plays for the Birmingham Barons, the AA affiliate of the Chicago White Sox.

That kind of attitude is one reason why the Chicago White Sox like Saladino so much. As an infielder, Saladino plays at either shortstop or second base. But Saladino's a real student of the game — thinking as much about the art of base-running as being fast.

Saladino is one of about 6,000 minor leaguers playing on 190 teams around the country. They're all vying for a single thing: making it to the big leagues. It's not easy. Most won't get there.

But Saladino's coaches all think he will, including manager Julio Vinas. Experience is the one thing that translates to success, Vinas said.

"That's something that really can't be taught," he said. "The only thing I am is I'm firm that you got to play hard and do things right. And he's one of those guys who plays hard and does things right. So good things always happen for him."

The White Sox promoted Saladino last year, sending him to the AAA Charlotte Knights, just one notch below the major leagues. The time spent in Charlotte changed his outlook, Saladino said, especially watching how more veteran ballplayers prepare and handle themselves.

"Just the time that I got to spend up there was a huge opportunity for me to learn a lot about myself, a lot about the maturity side of baseball," Saladino said. "How you just have to go about it every day."

But a few weeks after he went to Charlotte, the White Sox returned Saladino to Birmingham. Curt Bloom, the Barons broadcaster, said he doesn't feel Saladino is disappointed about being back in Birmingham. Bloom, who has called games for 25 years, noticed the way Saladino dealt with what others might consider a demotion.

A Minor Leaguer's Life: Bats, Games And A Nickname

"He's made that mental adjustment. A lot of other people over the years go, 'Why am I back? There's nothing else I can do?' That's not the case," Bloom said. "I think he's here enjoying it, polishing his skills, getting better knowing the next time he leaves, he won't come back."

Earlier this season, Saladino slumped at the plate. In April, he went hitless in five straight games. And then it happened again in May. Baseball is as much mental as it is physical. Battling through a slump is what successful players must do, and Saladino said that's what's changed most about him over the past year.

"You have to grow up at some point, you know," he said. "I think last year, that time I spent in Charlotte is when that happened for me. When I realized that."

As long as he plays for the Barons, Saladino says, he has just one goal: make it to the playoffs. And along the way, have some fun and keep improving his game.