Accessibility links
Hockey's Hottest Teams Hit The Ice In Stanley Cup Final After a bitter lockout that shortened the season, the National Hockey League is finally gearing up for the Stanley Cup Final. The series features two of the league's six original franchises, the Boston Bruins and the Chicago Blackhawks, and both teams come into the series on a roll. 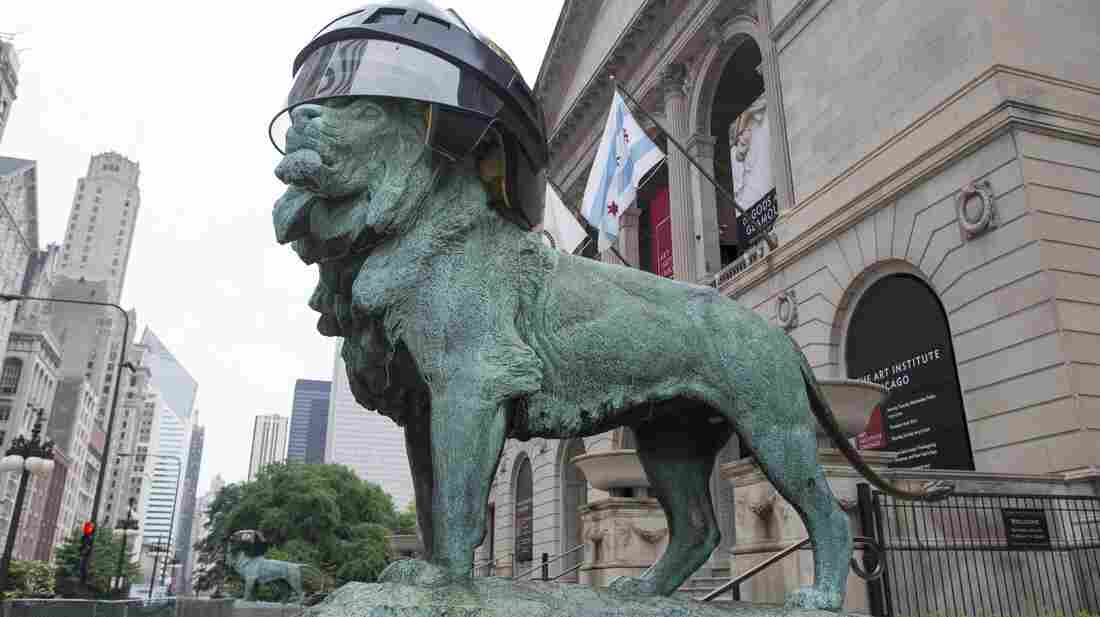 An oversized Chicago Blackhawks hockey helmet sits on one of the lion sculptures outside the entrance to the Art Institute of Chicago in celebration of the team's upcoming appearance in the Stanley Cup Final in Chicago. The Blackhawks host the Boston Bruins in Game 1 on Wednesday. Scott Eisen/AP hide caption 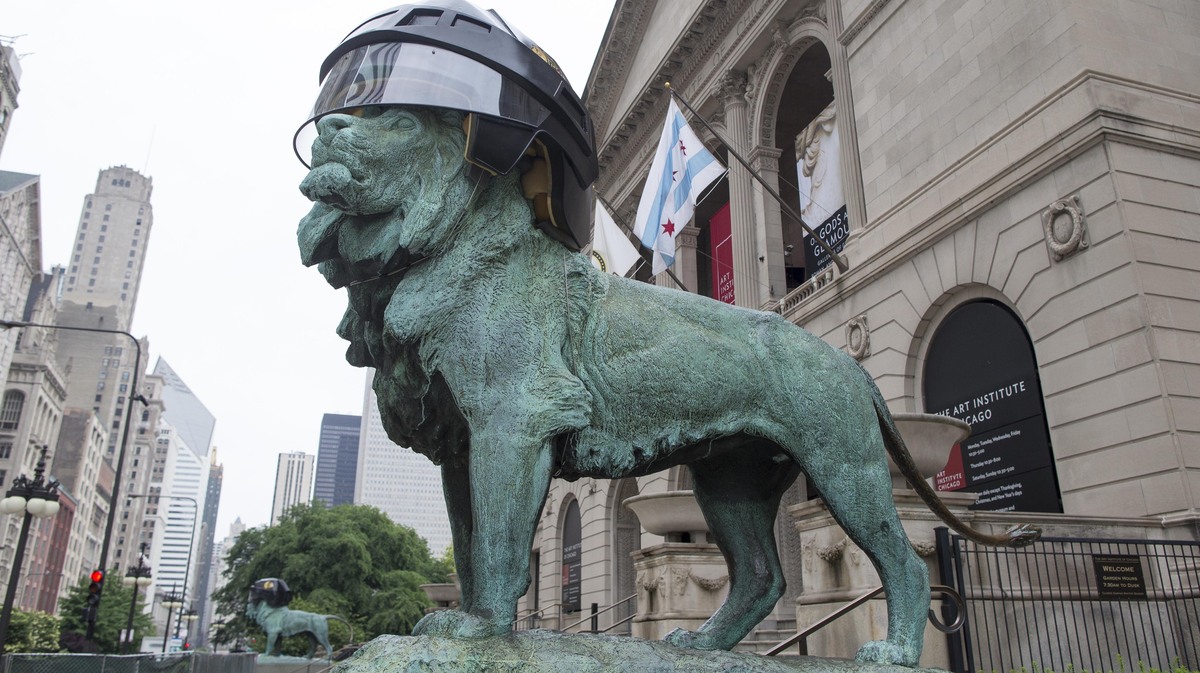 An oversized Chicago Blackhawks hockey helmet sits on one of the lion sculptures outside the entrance to the Art Institute of Chicago in celebration of the team's upcoming appearance in the Stanley Cup Final in Chicago. The Blackhawks host the Boston Bruins in Game 1 on Wednesday.

The National Hockey League's Stanley Cup championship gets underway in Chicago Wednesday night, with the Chicago Blackhawks and the Boston Bruins facing off in the first game of the best-of-seven series. It's a classic matchup between two of the NHL's original six teams.

Both teams are recent champs, which is helping passionate hockey fans and players put the bitter labor dispute that almost iced the season behind them.

Chicago is crazy about the Blackhawks right now. One of the dinosaurs outside the Field Museum of Natural History is wearing a huge Hawks jersey; the famous lion statues outside the Art Institute of Chicago are wearing giant Blackhawks helmets; and there are Blackhawks flags, banners, signs, shirts, hats and jerseys all over town.

"The city's pretty pumped about 'em," says Rick Smith, 50, while nursing a beer at the Windy City Inn. Smith says he and other hard-core hockey fans were the quiet minority for years while the Blackhawks trailed far behind Chicago's four other major pro sports teams in popularity. But the Hawks have improved greatly on the ice in recent years, becoming one of the league's elite teams — while Chicago's other teams are mired in mediocrity.

If you can't get excited about this series, you're just not going to watch hockey anymore. This is going to get you back in. There's no more lockout hangover. Not after this.

A Faceoff Between Two Of The NHL's Oldest Teams

After winning a Stanley Cup championship in 2010, Smith says, the team once known as "cold steel on ice" has caught fire. "Everyone knows about the Blackhawks. If you look around the city, that's all people wear are Blackhawk jerseys now ... and it doesn't matter what color — white, red, green, black — so it's pretty good."

The Blackhawks have even been converting those sports fans in the city who never cared for hockey before. Matt Hamilton, 32, says he never paid any attention to hockey or the Blackhawks while growing up in Chicago.

"But it's been awesome the last couple of years and I love 'em," he says. "It's my favorite sport all of a sudden."

But Hamilton and the thousands of Chicagoans on the Blackhawks' bandwagon may have met their match in Beantown. Hundreds of Boston Bruins fans showed up at the team's arena yesterday, screaming and waving signs to send the Bruins off to the first two Stanley Cup final games.

The Bruins, who won the Stanley Cup in 2011, are known as a big and physically punishing team that skates well. Whether it's enough to keep up with Chicago's speed and skill is part of what makes this a dream championship matchup. 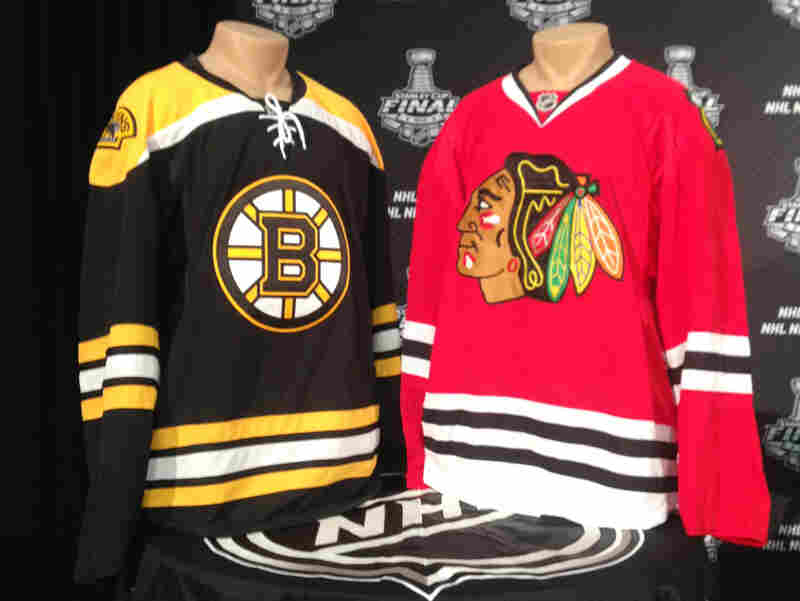 The Chicago Blackhawks and Boston Bruins are two of the NHL's oldest teams, but have never before faced off in a championship. David Schaper/NPR hide caption 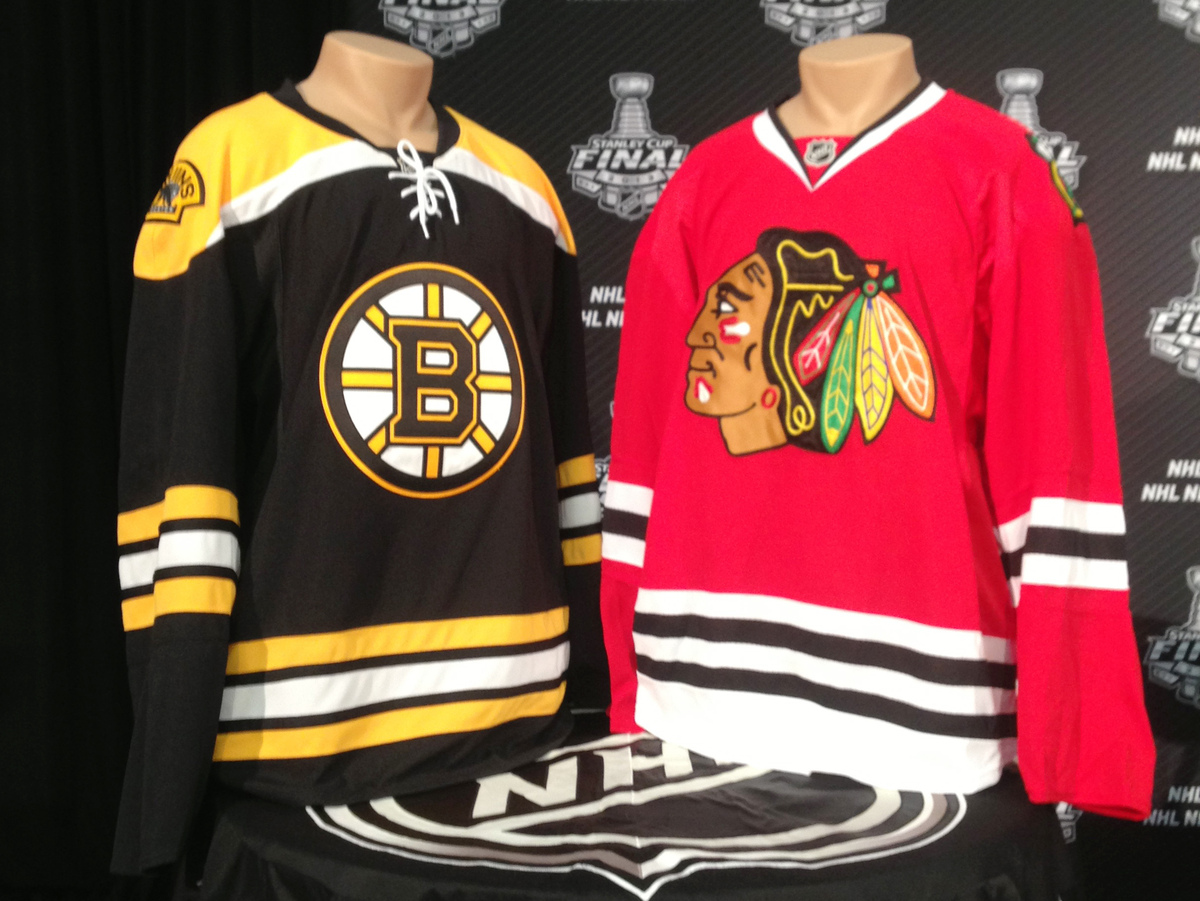 The Chicago Blackhawks and Boston Bruins are two of the NHL's oldest teams, but have never before faced off in a championship.

And these aren't just two of the league's best teams; they're also two of the oldest — both are among the National Hockey League's original six teams. Yet in nearly 90 seasons of hockey they've never before faced off against each other for the championship.

Leaving The Lockout Hangover Behind

NBC hockey analyst Eddie Olczyk says that makes this Stanley Cup final extra special. "Because when you talk about two great towns and two great sports cities, and two teams that have been around for a long time in the NHL, you need that, especially coming [from] where we were."

In fact, this year's hockey season almost didn't happen. A bitter labor dispute, in which the league locked out players for the second time in seven years, delayed the start of the season until mid-January and led to a shortened schedule.

Back at the Windy City Inn, Matt Hamilton is one of many fans who started out the season boycotting games. But he says the Blackhawks record streak of 24 games unbeaten in regulation this year reeled him back in. And nothing, he says, could be better than facing Boston in the finals.

"I'll tell you what, if you can't get excited about this series, just, you're not going to watch hockey anymore," Hamilton says. "This is gonna get you back in. There's no more lockout hangover. Not after this."