Accessibility links
Movie Review - 'Call Me Kuchu' - In Uganadan Politics, It Takes A (Gay) Village An excellent documentary looks at Uganda's controversial Anti-Homosexuality Bill — both its personal and political implications — through the story of activist David Kato. While emotionally crushing, the documentary is unmistakably a celebration of LGBT activists. (Recommended)

It Takes A (Gay) Village In 'Call Me Kuchu'

It Takes A (Gay) Village In 'Call Me Kuchu' 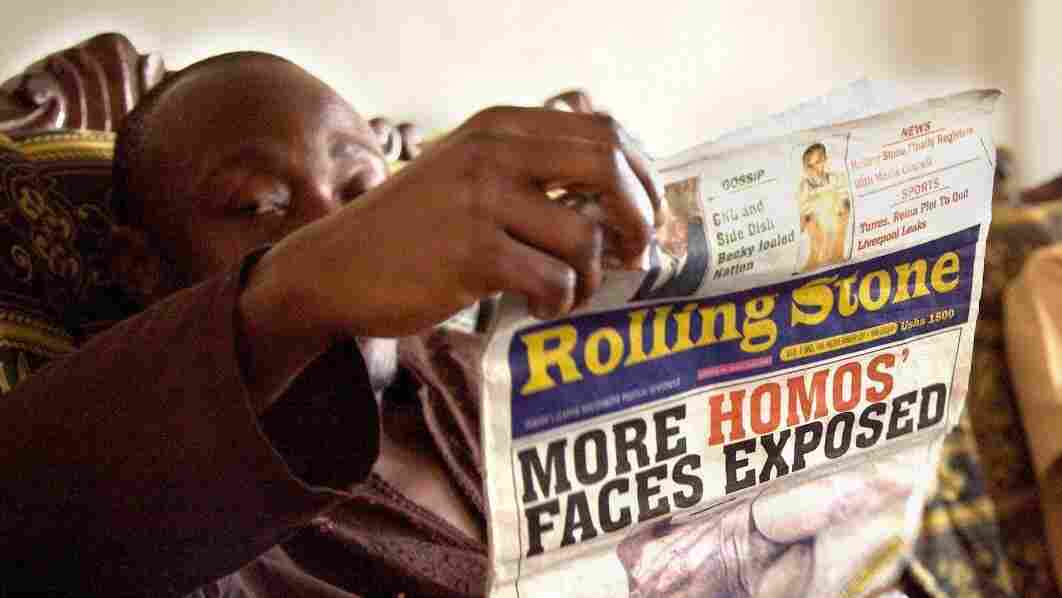 The Ugandan tabloid Rolling Stone — no relation to the American publication — has been a leading player in anti-gay crusades in the east African nation. The documentary Call Me Kuchu profiles a community of activists at the center of the political and cultural storm. Cinedigm hide caption 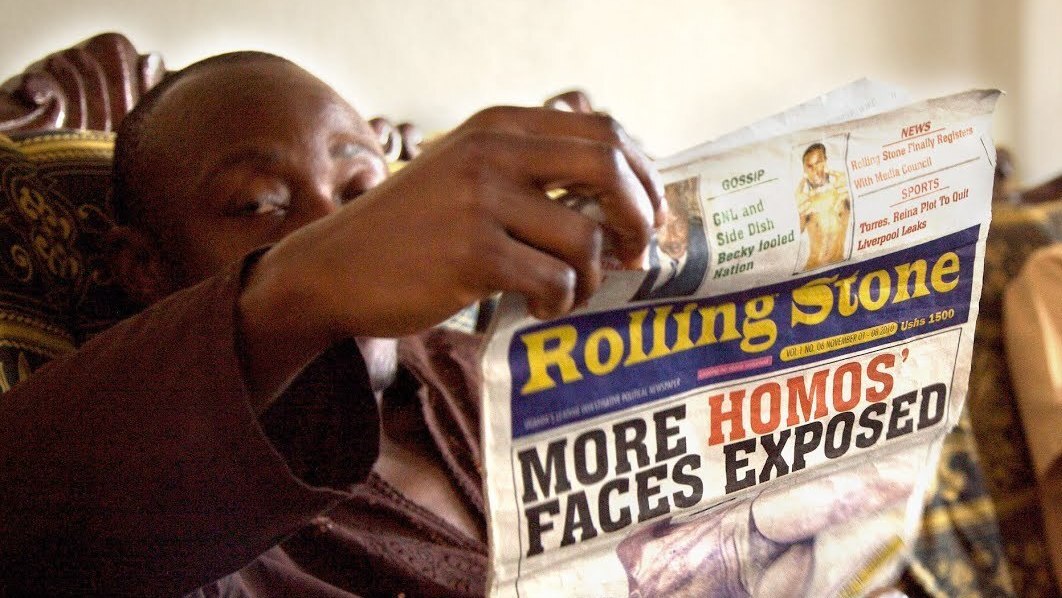 The Ugandan tabloid Rolling Stone — no relation to the American publication — has been a leading player in anti-gay crusades in the east African nation. The documentary Call Me Kuchu profiles a community of activists at the center of the political and cultural storm.

From 'Call Me Kuchu' - 'We Shall Ignore The Right Of Privacy'

'We Don't Recognize It As a Human Right Here'

Horrific and uplifting, the excellent documentary Call Me Kuchu is partly framed as a portrait of David Kato, Uganda's first openly gay man. An activist of enormous courage and persistence — against odds that make the U.S. fight for marriage equality seem like a cakewalk — Kato was a savvy political strategist, with wit, charm and joie de vivre to burn. And he loved a good party, with his friends in drag where possible. But he was terrified of sleeping alone on his farm.

And with good reason: In January 2011, a year after directors Katherine Fairfax Wright and Malika Zoukali-Worrall began making Call Me Kuchu, Kato was bludgeoned to death in his home by a man he'd been kind to. Because his tiny group was well-connected, his murder instantly became global news.

Call Me Kuchu — the word is a local colloqualism for "queer" — doesn't mine the story of his murder for its drama, though, and really there's no need to, for it was only the culminating incident in a numbing, constant narrative: Kato and his tiny band of fellow activists lived with hatred and violence day in, day out.

The film is structured around their legal fight against a Ugandan anti-homosexuality bill that called for the death penalty for HIV-positive gays — and prison for anyone, regardless of sexual orientation, who failed to turn in anyone known to be L,G,B or T.

You'd think such malice, such flagrant violation of civil rights, could occur only in a fascist state these days. But the film shows in frightening detail that such formal legislative proposals are made possible precisely by the canny exploitation of the rickety new democratic infrastructure of a post-colonial African state.

In the wake of Idi Amin's brutal dictatorship, and still operating under the long shadow of British influence, Uganda has built a modern political and legal system. Yet amid widespread poverty and uneven education, a culture of reactionary extremism persists, its flames regularly fanned by religious zealots, unscrupulous politicians and media hacks. 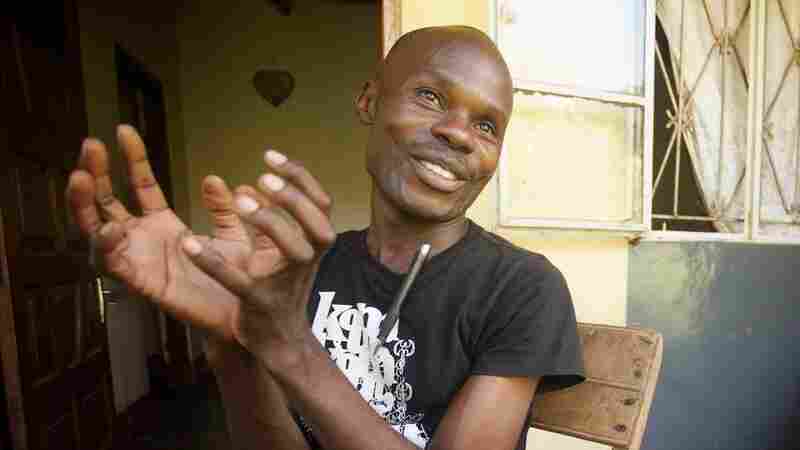 David Kato, a teacher and LGBT rights activist — as well as the first openly gay man in Uganda — is at the forefront of Call Me Kuchu's story. Cinedigm hide caption 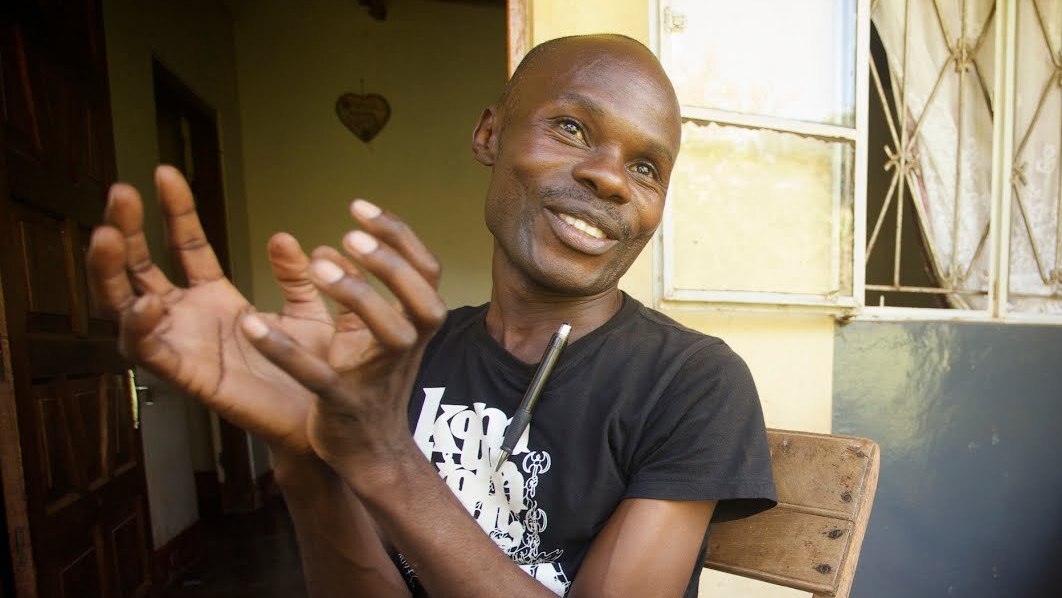 David Kato, a teacher and LGBT rights activist — as well as the first openly gay man in Uganda — is at the forefront of Call Me Kuchu's story.

We see American evangelists, clearly thrilled to find more fertile soil for anti-gay rabble-rousing than they did at home, whipping up crowds to take action against "sodomites" who would corrupt their children. The cocky young editor of the trash tabloid Rolling Stone — no relation to the American magazine published (ironically enough) by out gay media mogul Jann Wenner — crows about putting photos of gays he outed on the cover under the headline "Hang Them."

Crowds of other haters crash Kato's funeral to scream invective at the mourners. And at the United Nations, as country after country voices opposition to the Ugandan bill, the representative from Robert Mugabe's Zimbabwe begs to differ, citing the fear that African children could be recruited to "abhorrent practices."

Mostly, though, Call Me Kuchu is a celebration of Kato's small band of LGBT activists, an opportunity for them to tell their stories. They're gentle Christians, and it becomes a privilege to know them all, including the octogenarian straight cleric who openly supports them.

Meet Naome, a serenely beautiful lesbian who walks a fine line building bridges to the mainstream world, knowing that if she's outed all her gains will crumble.

Here's Stosh, a 20-something trans man, who tells of being berated by his grandmother years ago, after a man saw the teenage Stosh fooling around with another young woman — and administered a "corrective rape."

And this is Longjones, a vivacious LGBT counselor who came out after a long sojourn in the closet, who celebrates a key legal victory by emceeing an impromptu drag beauty pageant.

What keeps the group active is the knowledge that their greatest enemy is isolation; even as they pack their bags for yet another move prompted by a fresh round of threats, they stay in close touch.

By the end of this hair-raising film you may share their grief, their hope and their dream of a gay village that will shelter them from a society that, despite all its trappings of freedom and modernity, refuses to receive them as equals. (Recommended)