Accessibility links
Interview: 'Man of Steel' Director Zack Snyder In Man of Steel, the director behind Watchmen and 300 has had a go at that most quintessentially American superhero. He speaks with NPR's Linda Werthheimer about his reverence for the character's mythology — and why he chose to change some of it up. 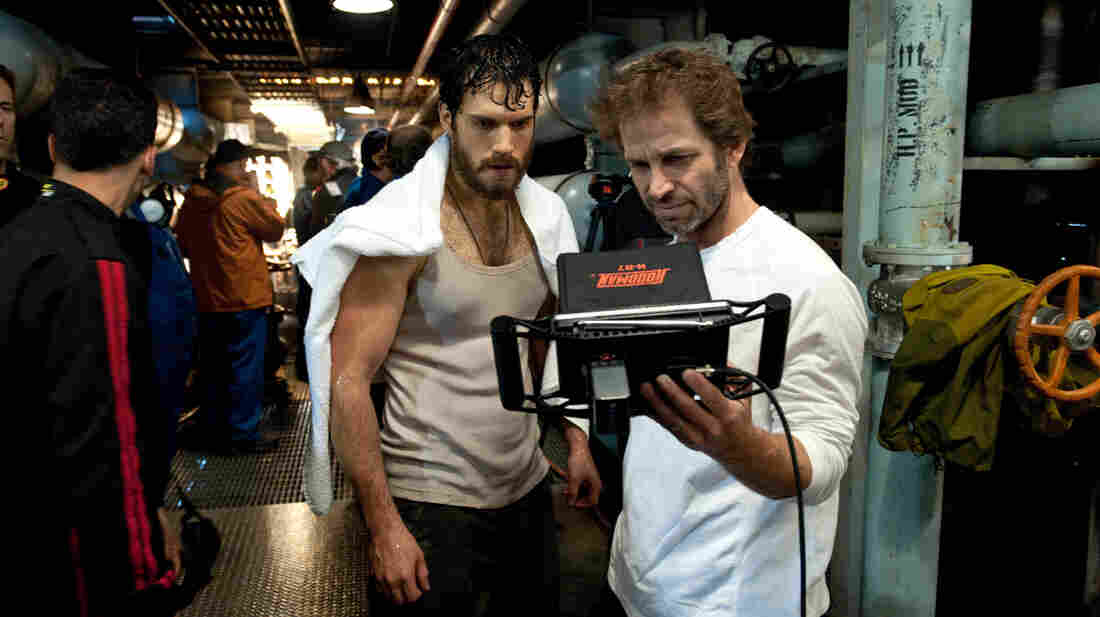 Actor Henry Cavill and director Zack Snyder confer on a shot for an early sequence in Man of Steel. Cavill is the first British actor to wear Superman's iconic red and blue — though not the first to play a D.C. comics superhero. Clay Enos/Warner Bros. Pictures hide caption 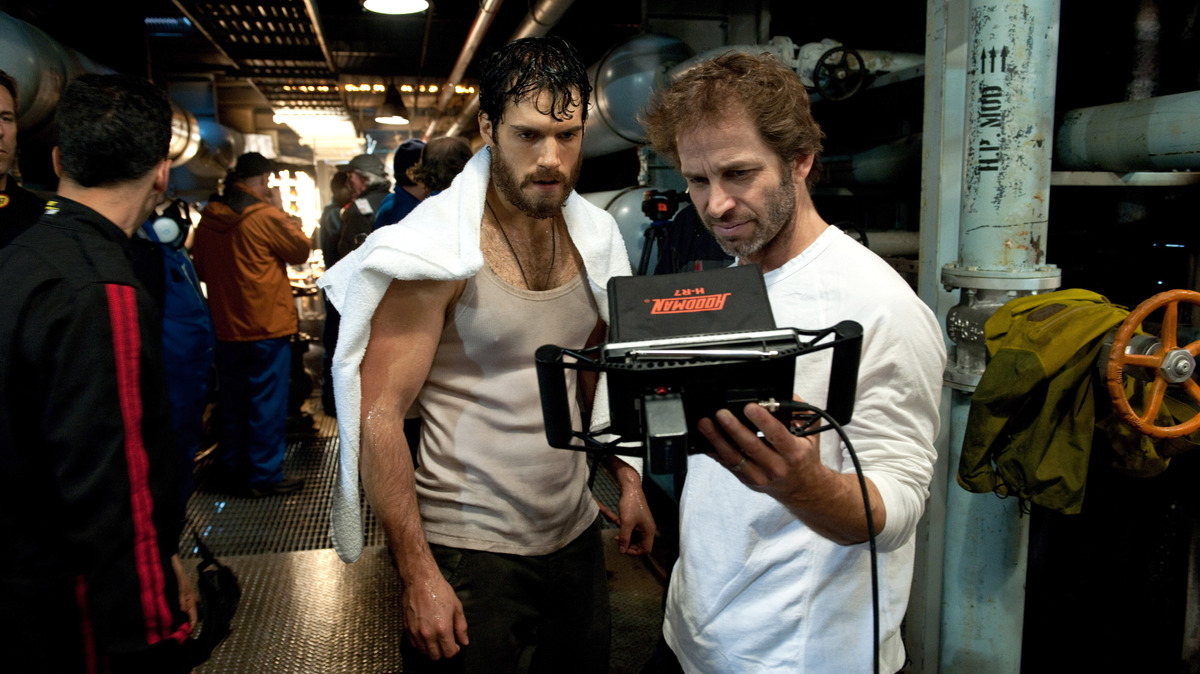 Actor Henry Cavill and director Zack Snyder confer on a shot for an early sequence in Man of Steel. Cavill is the first British actor to wear Superman's iconic red and blue — though not the first to play a D.C. comics superhero.

The quintessential American superhero — the one who forged the genre — returns to the multiplex this weekend: Superman. The latest big-screen iteration, called Man of Steel, explores the birth of the character (played as an adult by British actor Henry Cavill), delving into why he came to Earth, his inner conflicts growing up, and how he resolves them.

And more than perhaps any other big-screen version of the story, Man of Steel lingers on the wrenching death throes of Superman's home world — the distant planet Krypton, where his natural father (Russell Crowe) and mother work desperately not just to save their son, but to save their species.

"I have a reverence for that mythology," says director Zack Snyder, who admits to being "a slight dork" about such things. "And I really wanted to treat the experience of seeing Superman born [with care]. ... And that ancient technology ... I find fun to think about. ... Within that world, it was fun to see Jor-El putting his son into the basket and [metaphorically] sending him down the river."

Snyder joined NPR's Linda Wertheimer to talk casting choices, cutting the film down to size, and why this version of the character doesn't wear his shorts on the outside.

The film's opening sequences chronicle political clashes and ultimately a planetary cataclysm on Krypton, home world to Superman and his biological father, Jor-El (Russell Crowe), and mother (not pictured.)

On how Superman's clout made casting easier

"I really credit the power of Superman himself and his mythology, because I think every one of these actors — Kevin Costner, Diane Lane, Laurence Fishburne, Amy Adams ... Russell Crowe — [I was] just calling them and saying, 'Listen, you're on my wish list of guys I want on my movie. It's a Superman movie.' And they say, 'Let's talk about it. That sounds fun.'

"Every single one of them was either a fan or understood sort of the significance of Superman, and really wanted to participate. I think in our collective psyches, Superman has a place that is pretty strong."

On casting a serious actor as Superman's nemesis

"Michael Shannon, who plays General Zod, is just an amazing actor, and I really wanted him from the beginning. And I think the way I got him in the movie was that I explained to him that General Zod was not crazy; in the end, he's just trying to save his people. You know, it's not completely maniacal."

"Even though he's an incredibly versatile actor, I think in this setting — in a Kansas cornfield — he seems to be very much at home. [Laughs.] He's mastered the cornfield. ... You really feel that he's just trying to take care of his son and equip him for the life that's ahead of him. We've said that Superman is like the ultimate adoption story, and it really is. You know, I have adopted children, so it's personal for me — that whole interaction between Jonathan and the young Clark."

On why Superman's underwear is on the inside this time around

"It's quite a big deal! ... What we wanted to do with the costume is make it feel like it was based on this alien technology and culture; I wanted to explain the costumes through Clark's original alien culture. ... It wasn't like a thing that his [Earth] mom sewed out of a blanket or anything like that. To make it make sense, we really wanted to base it on Kryptonian culture — and [that's] a cape culture. It's cool; we should all wear capes. I think it's a fashion thing that's going to catch on.

"But look, the underwear comes from — it's a leftover from Victorian strongmen, is what they originally based the design of the Superman costume on in 1938. I feel like we've moved on a little bit from that era of modesty."

"It's a rich and varied mythology. ... We weren't really too concerned about the length. I mean, I think my first cut of the movie was like three hours and 20 minutes long. It's hard because, of course, when I talk to the true dorks, they're like 'Why is it so short?!?' "

On the prospect of a director's cut