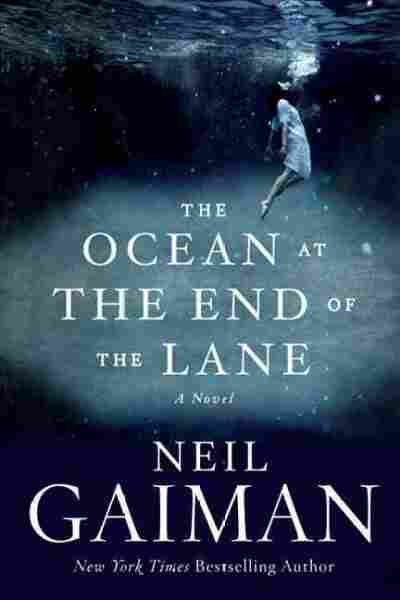 The Ocean At The End Of The Lane

Neil Gaiman, one of the world's most beloved fantasy authors, has won the Hugo and Bram Stoker awards, and the Newberry Medal — and now he's written his first novel for adults in eight years.

The Ocean at the End of the Lane opens with an Englishman — never named — who returns to the Sussex town where he grew up. More specifically, he returns to the house he lived in as a boy, and suddenly, he's lost in memories of the time his family's lodger (a down-on-his-luck opal miner) stole their car, ran over their cat, and accidentally woke up a dark energy that threatened to swamp the world. Luckily for both the boy and the world, a slightly older girl named Lettie Hempstock, who lived at the titular end of the lane, stepped in to save the day.

Before all that happens, though, the miner replaces poor little kitten Fluffy with an older, snarlier cat — a sort of metaphor for the overall story. "This is a book that, on the outside, could appear very cute," Gaiman tells NPR's Scott Simon. "I actually had to decide, well, there's a lot of stuff in here that kids would like, but it's obviously not a children's book, even though it has the lovely fluffy stuff, it has claws."

On deciding to make Ocean an adult book

"Really, I kept a sort of open mind until I got to the very end, and then looked at what I'd done. ... It was meant to be just about looking out at the world through the kind of eyes that I had when I was 7, from the kind of landscape that I lived in when I was 7. And then it just didn't quite stop. I kept writing it, and it wasn't until I got to the end that I realized I'd actually written a novel. ... I thought — it's really not a kids' story — and one of the biggest reasons it's not a kids' story is, I feel that good kids' stories are all about hope. In the case of Ocean at the End of the Lane, it's a book about helplessness. It's a book about family, it's a book about being 7 in a world of people who are bigger than you, and more dangerous, and stepping into territory that you don't entirely understand."

On being the little boy who lived in books

"When I was 7, my proudest possession would have been my bookshelf 'cause I had alphabetized all of the books on my bookshelf. I'd got to the point where I'd persuaded my parents to let me go to the local library in my summer holidays, and they would actually drop me off with sandwiches at the library, and I would just head into the children's department at the back and just start reading my way through it. It was the best place in the world."

On being a journalist

"I was never a very good journalist, but I loved being a journalist, and I loved it because it taught me two really, really important things about writing. It taught me compression: If I was interviewing somebody, and I talked to them, and I'd wind up with 3,000 words, 4,000 words, and I'd need to get that down, I learned how to compress what they'd said while still keeping speech patterns, which became incredibly important later when I was writing comics. And even more important than that, I learned about deadlines.

"I do remember once, getting a phone call one evening from an editor, saying, 'Your book review, it's due in tomorrow.' And I said, 'No no no no no, it's due in on Tuesday.' And they said, 'Yes, today is Monday.' And I hadn't written it, and I looked around the room and I couldn't see the book. And I said, 'What happens if I don't get it in?' And they said, 'Well, then we'd have a blank page, and we'd have to run a little photograph of you, with your address and your telephone number that anybody could call up if they wanted to find out what that book was like.' And that concentrated the mind wonderfully."

On writing in different voices

"That's part of the job, I think ... when I was growing up, some of my favorite writers, the people I respected the most, were the ones who did everything, you know. A good writer should be able to write comedic work that made you laugh, and scary stuff that made you scared, and fantasy or science fiction that imbued you with a sense of wonder, and mainstream journalism that gave you clear and concise information in a way that you wanted it. It always seemed to me that that was what a writer should do. You have all these amazing tools; it's up to you what kinds of tunes you play on them, and you want to play all the tunes. As I grew older, I was fascinated to realize that actually, society to some extent frowns on those of us who like messing about in an awful lot of different sandboxes. From my perspective, I just love being able to do everything. I think a good writer should be able to do everything. And if you can't do everything brilliantly, at least you should have a bash."