Accessibility links
The Beatles' Defining Moment (Hint: It's Not 'Sgt. Pepper') In 1963, the Fab Four recorded a series of sessions at the BBC, which author Colin Fleming argues are emblematic of the band they would become. 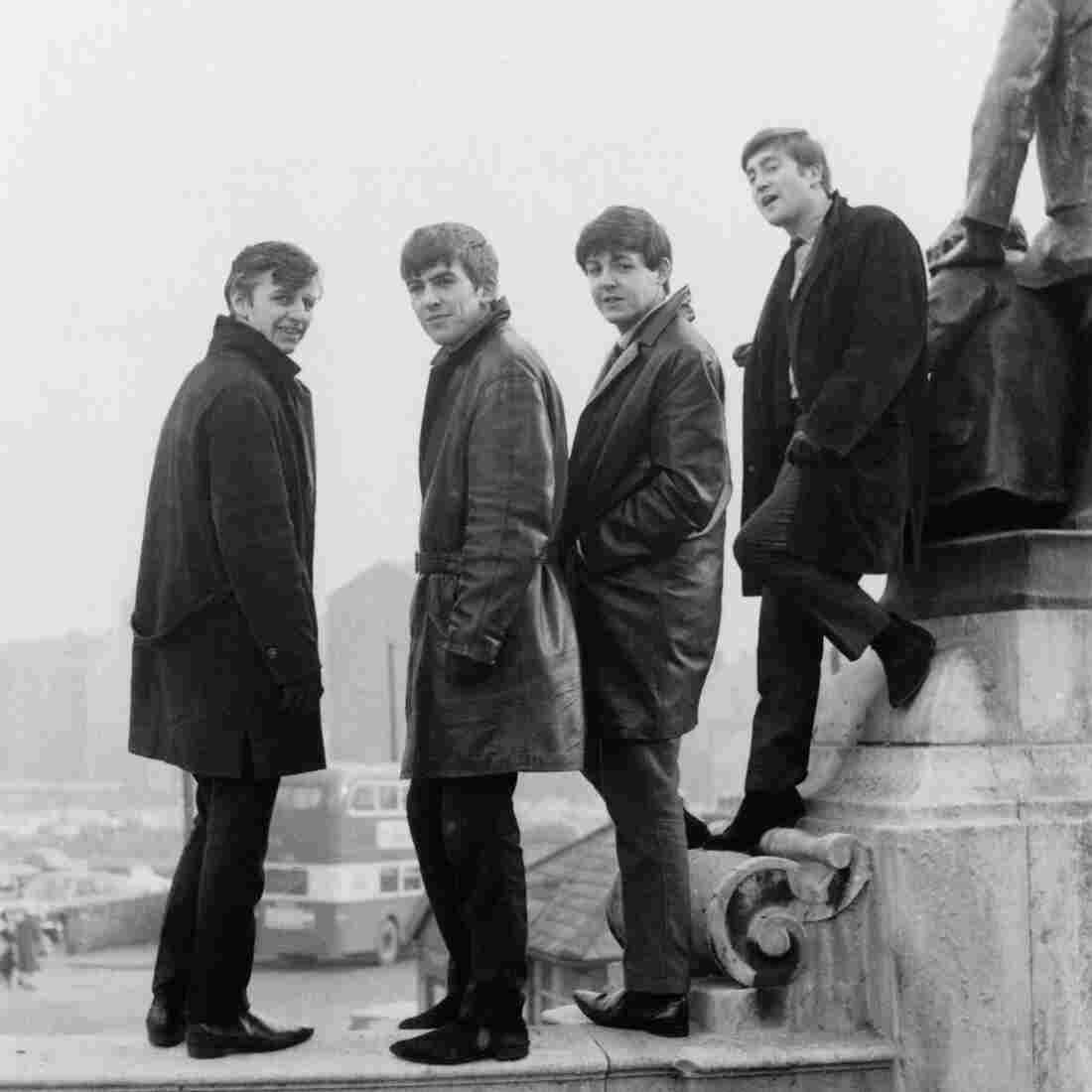 The Beatles pose in Liverpool's Derby Square in February 1963 — the year, according to author Colin Fleming, that yielded the band's most definitive work. Michael Ward/Getty Images hide caption 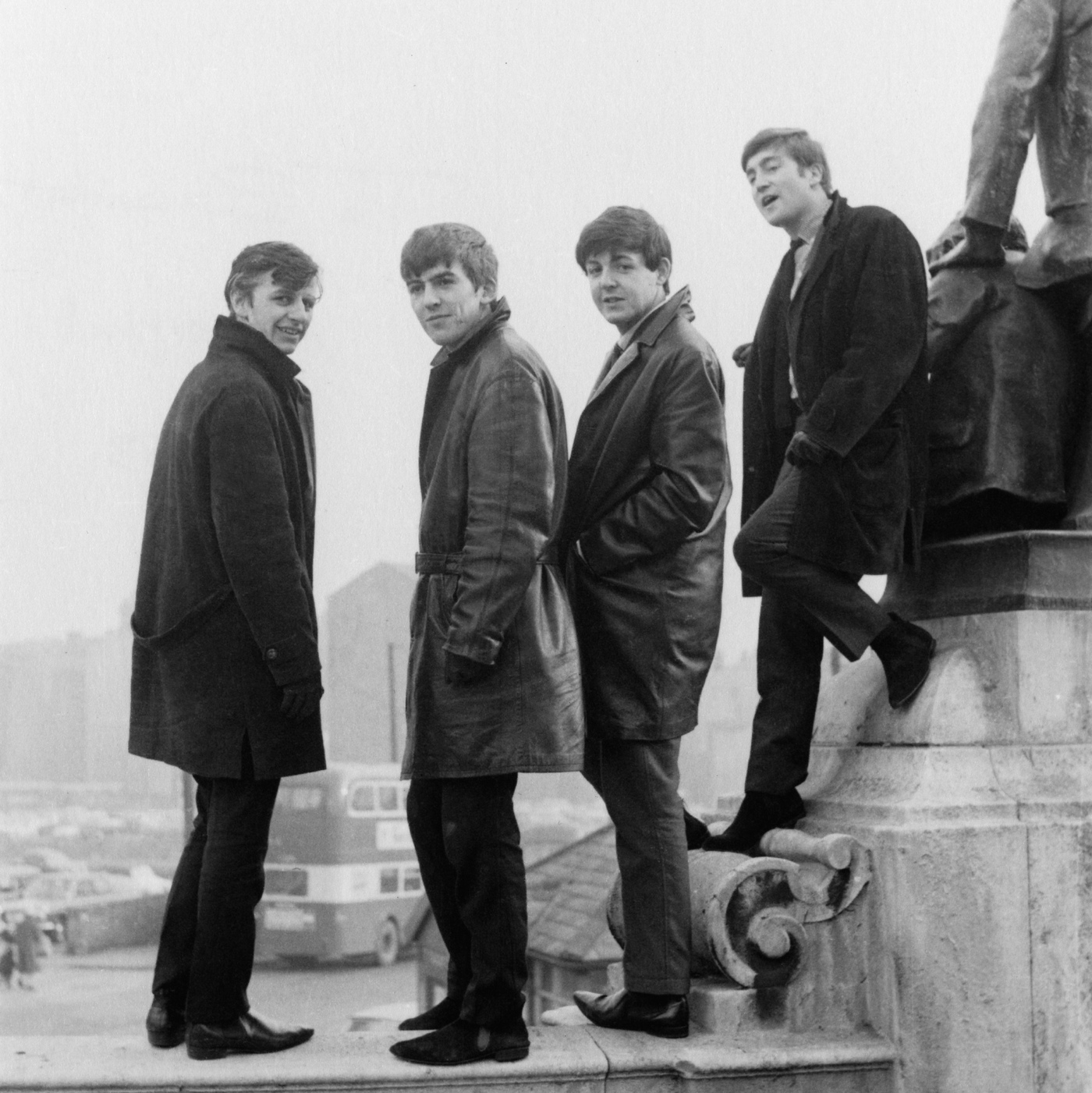 The Beatles pose in Liverpool's Derby Square in February 1963 — the year, according to author Colin Fleming, that yielded the band's most definitive work.

Author Colin Fleming is an avowed Beatles superfan, but he has one deeply held opinion about the band that other fans might find heretical. In an essay in this month's issue of The Atlantic, Fleming argues that the Fab Four's most emblematic, "Beatle-esque" year was 1963, before they'd even made it big in the States. His evidence? A set of sessions that John, Paul, George and Ringo recorded that year at the BBC, which Fleming argues are the quintessence of everything the group would become.

At the risk of a flood of calls and letters from angry fans, arguing that the band's defining year was '65 or '67, Weekend Edition Sunday decided to hear Fleming out. He spoke with host Rachel Martin.

Well, I think people like to focus on [Sgt.] Pepper from '67, maybe Rubber Soul from '65 or Revolver from '66. But if you wanted to know what The Beatles liked, what they listened to, what they were trying to become and, in large part, who they already were and who they would be, the '63 BBC recordings would be your one-stop shopping destination. When they tackled ... a crucial rock 'n' roll text like Elvis' "That's All Right, Mama," you can hear that they keep elements of the past — that burnished country tone that Elvis' band excelled at — but they've added a sort of stomping, northern soul element to it. So they're really overhauling the past.

So these guys were young then. They were at kind of this nascent stage in their career. Yet they had the audacity to cover the king of rock 'n' roll, and black bluesmen from America. I mean, what was going on with them?

There was a lot of temerity there, actually, for four skinny northern white kids. A lot of times, British rock 'n' roll bands would look to the States as the music here, being so legitimate. So to be 21, 22, and think, well, let's have a go at Elvis, let's have a go at, in another instance, Arthur Alexander, who was like "Lord R&B," basically ... You didn't really want to mess around with Arthur Alexander. And they do a cover of Alexander's "Soldier of Love" that, if Alexander was listening to it, he'd be like, "Oh my goodness — they've one-upped me!" The groove The Beatles hit in this song is so deeply incised. It's one of their earliest "big boy" moments.

How many sessions did they record at that time?

In '63 they did 40. This was a band — you know how everyone today says, 'Oh, I'm busy'? You're not busy. You don't know how busy these guys were. They were doing concerts, they did two albums that year, they did singles, all sorts of appearances — and then they sandwich in these BBC sessions. It became almost a clubhouse for them.

[One of those sessions includes] The Beatles' take on "Baby, It's You" by The Shirelles. So they were getting inspiration from all corners of the musical universe at the time.

It was everything from Broadway, pop schmaltz, R&B — and lots of girl-group material, actually. You were supposed to be a hard guy if you were from a place like Liverpool, but they loved doing girl-group songs. And I think that sensibility informed their songwriting later. They did, for instance, a cover of Little Eva's "Keep Your Hands Off My Baby," which is kind of about slumber parties and pillow fights and don't-steal-my-boyfriend. But Lennon, who always loved singing a song about the "green beast," — jealousy — really lays into it with a classic vocal. And they even start it off with this proto-hip-hop beat.

So despite all of this, there will still be people who say you are just dead wrong — that 1963 may have been significant, but how could it be the most emblematic Beatles year? After all, bands evolve, they change; I mean, in the final analysis, 1963 — why was this so seminal?

Well, The Beatles never really were in their present. Their present was always them being in their future, in a sense — it was always about evolving. And I think what we hear here for the first time with this group is, there was no "can't." There were no rules that had to be obeyed. And they take on songs that you would never expect — something like "I Just Don't Understand," an Ann-Margret torch song. And in it we can hear something peaty, pungent ... It's very earthy, yet at the same time the emotionalism is controlled. We'll hear this grow up into "Eleanor Rigby" on Revolver, "She's Leaving Home" on Sgt. Pepper ... I think, if we don't have The Beatles in the BBC sessions, we don't later have The Beatles as we've come to think of them.