Accessibility links
My Father, The Pilot We tend to think we have our parents figured out, but we often don't. Reporter Monique Parsons knew her dad as a mild-mannered avocado farmer who rarely strayed from home. On this Father's Day, Parsons tells the story of how she discovered that her father was actually a fearless pilot. 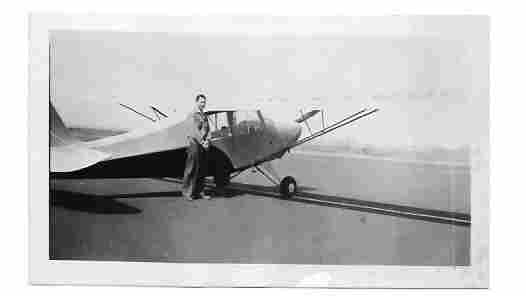 My dad was a mild-mannered guy. Never bragged. Hated sports. Mom won the arguments. He was an avocado farmer near Santa Barbara, but being dad was his No. 1 job.

He read me bedtime stories, never missed a piano recital or a family dinner. And he played it safe: Dad's idea of adventure was driving his Ford Taurus to town without the wiper fluid filled to the top.

But dad watched the skies. He knew every plane that flew over. He'd been a pilot before I was born; built a little airport on the farm, in fact. Sometimes movie stars would land there on their way up to Santa Barbara. But for most of my childhood, cobwebs filled the hangars. I used the runway as a bike path. 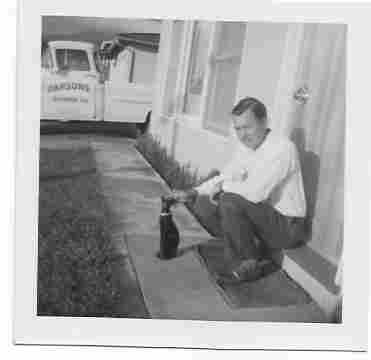 Louis Parsons in November 1960, shortly before he gave up flying and started a family. The truck in the background says "Parsons Airpark," after the private airport he built in Carpinteria, Calif. In the 1950s, movie stars would sometimes fly in on their way up to Santa Barbara. Parsons Family Photograph hide caption

It was hard to picture him in a cockpit. I'd seen Top Gun; I knew what great pilots looked like. But when he was in his 70s, I got him talking.

Turns out he'd mastered the controls of dozens of planes. He piloted a single-engine Bonanza across America at age 17 and taught soldiers to fly helicopters. He also flew bombers, converted into tankers, to fight Southern California wildfires.

Coping On Father's Day Without Dad

This was my unassuming dad!

Dad died not long ago. We hired a pilot to scatter his ashes over the farm. I'll always remember that little plane coming over the mountain, with dad inside.

I never saw my dad pilot a plane. But parenting can be a scary business, too, and I think Louis Parsons approached fatherhood like the pilot he was, like he was making a tricky landing on a downhill runway with trees all around. He gave it all he had, and he was never afraid.