Accessibility links
Report: Stuart Neville, Author Of 'The Ghosts Of Belfast,' 'Stolen Souls,' 'Collusion,' 'Ratlines' The capital of Northern Ireland is no longer the city of snipers that it was before the Good Friday Agreement, but novelist Stuart Neville still draws inspiration from the decades of violence. In The Ghosts of Belfast, he examines the shattered life of an IRA killer in the aftermath of The Troubles. 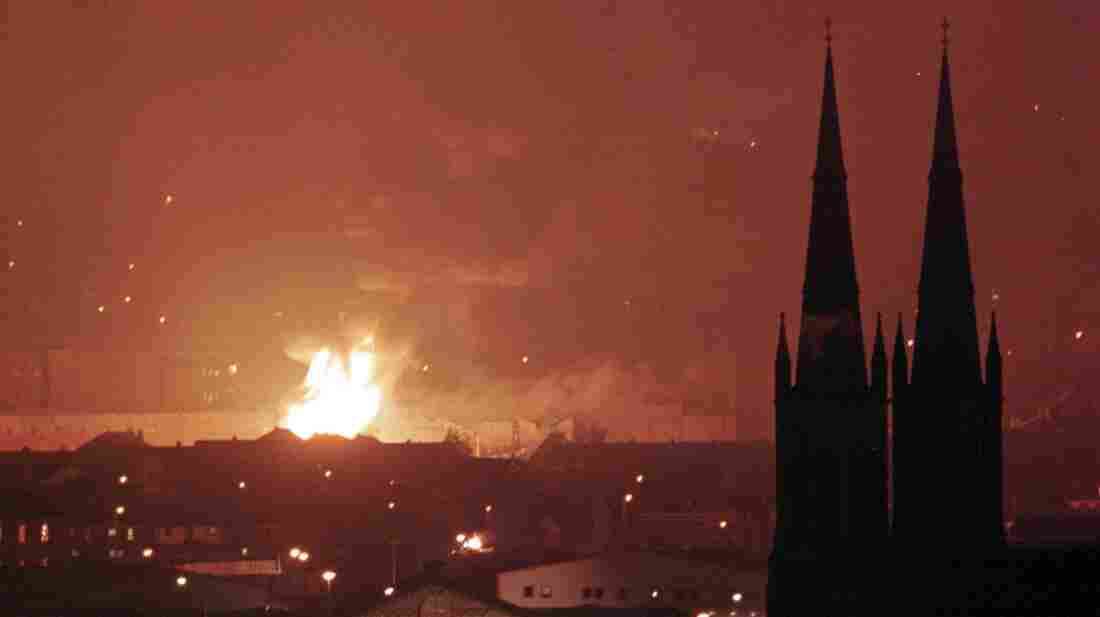 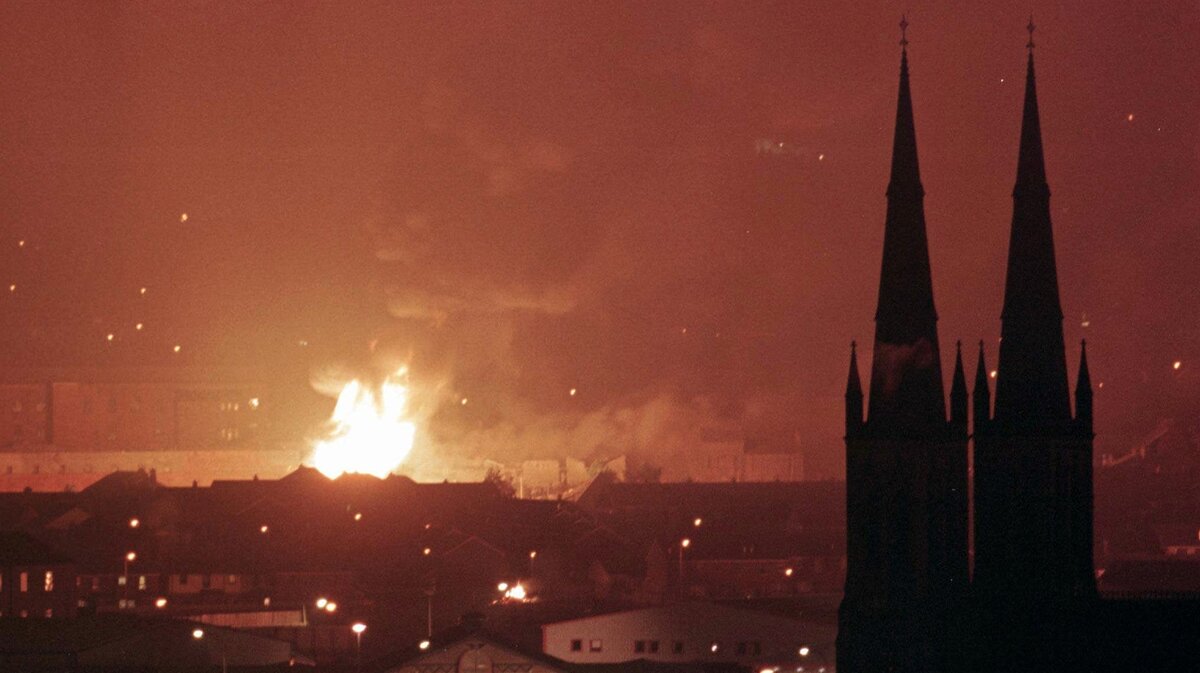 Bonfires light up the Belfast skyline on July 12, 1997, as Protestant loyalists commemorate the 17th century victory of a Protestant king over his deposed Catholic predecessor. Known as the Battle of the Boyne, the confrontation is part of a long history of tensions in the region.

At 41, with long black hair, Stuart Neville looks more like the rock guitarist he used to be than the author he is now. He lives in a small town with his family — not in Belfast, Northern Ireland, the city that plays a central role in his thrillers, but just outside it. 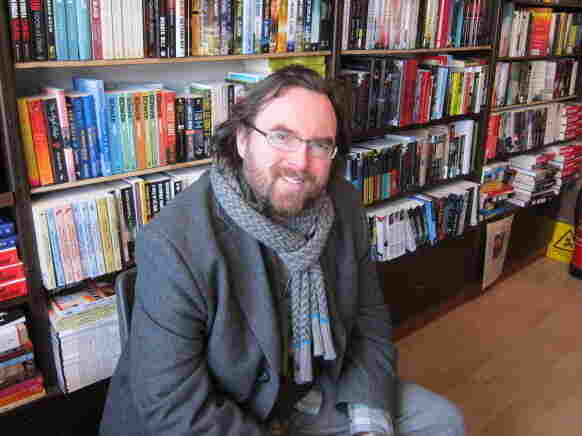 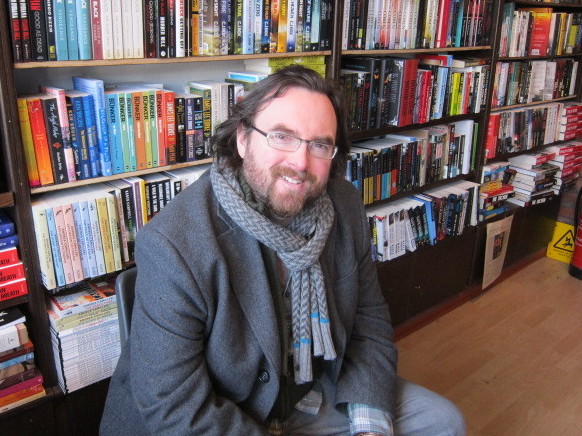 This week, world leaders are gathered in Northern Ireland for the G-8 conference, but such a meeting would have been unthinkable before the 1998 Good Friday Agreement, which brought Catholics and Protestants together in a new, tense, power-sharing government. Neville sets most of his work in the time following that agreement, which ended the 30-year conflict known as The Troubles.

Standing outside what was formerly the Northern Bank, across from Belfast's City Hall, Neville recalls the details of a heist in which approximately 26 million pounds were stolen. Residents still talk about it today.

"They drove a lorry up the side, opened the door, money was loaded into the lorry and away they went," Neville says. "Of course it turned out within a few days it was the IRA who'd done it. They had kidnapped somebody who worked for the bank, forced them to come and load the money up. I remember jokes at the time, you know: This was a retirement fund for the boys."

"The boys" means the leadership of the Irish Republican Army, and jokers called the heist a "retirement fund" because the robbery happened in 2004, while The Troubles ended in 1998 — at least, on paper. From that point forward, there was officially a truce between the Protestant loyalists who want Northern Ireland to stay in the United Kingdom and the Catholic Republicans who want all of Ireland to be united. 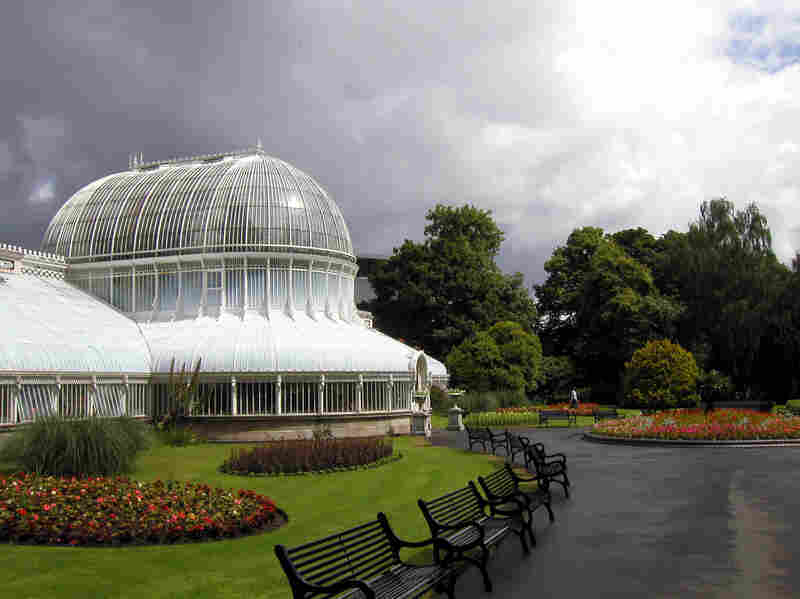 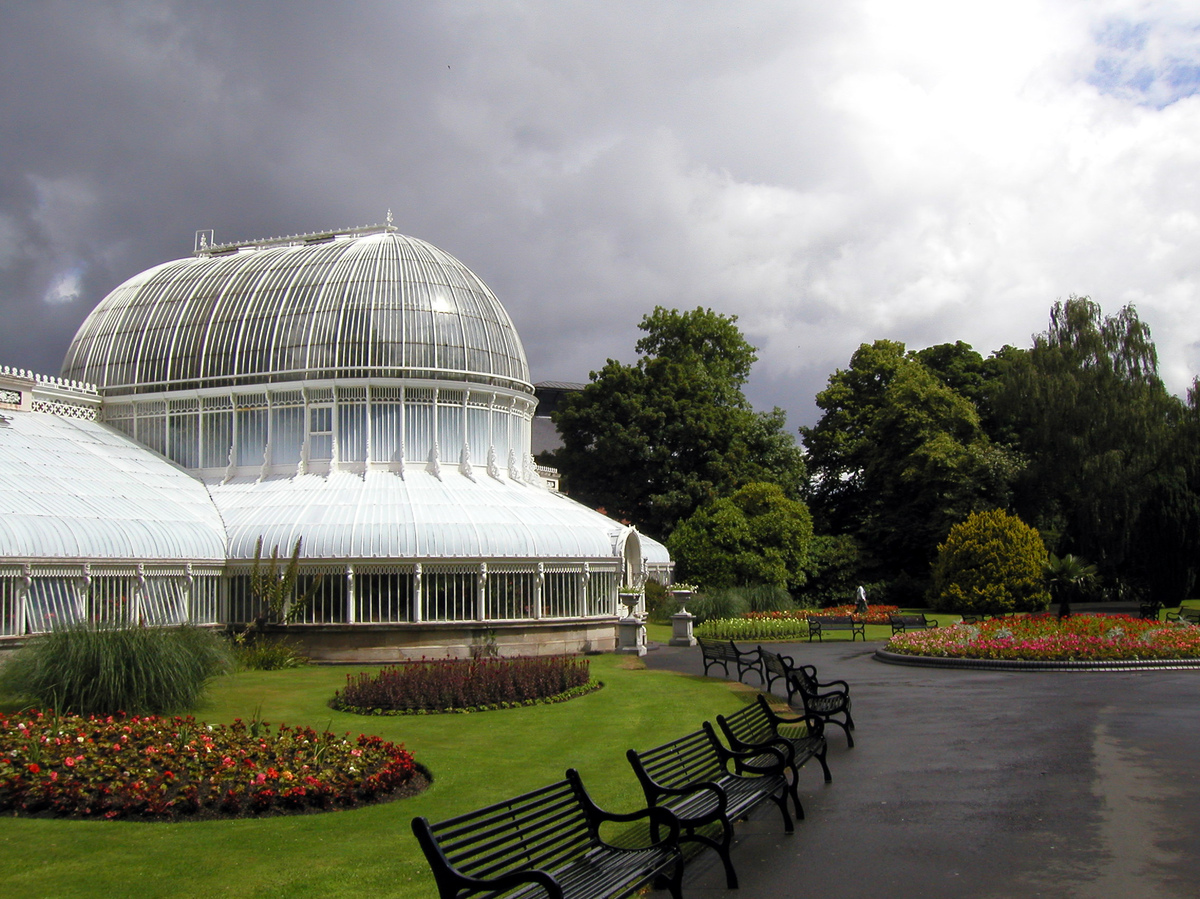 The Palm House in Belfast's Botanic Gardens houses a range of tropical plants.

Neville writes about the aftermath of The Troubles — the crime that continued, the demand for revenge, the tensions within the police and the paramilitaries. His first book, The Ghosts of Belfast, examines the shattered life of an IRA killer, and in two other novels he continues to explore the legacy of The Troubles. It's a tense history of violence that isn't always visible on Belfast's surface.

"It's such a pretty place," Neville says, on a bench at the Botanic Gardens park near Queens University. He's describing both the real-world view and a scene that he wrote set in this picturesque location. "We're sitting here in front of the Palm House, which is all white, metal and plasterwork and glass. Surrounded by all these gardens and so on, and there's a man with murder in his heart. "

Neville's fictional character Gerry Fegan had been an assassin for the IRA. He got out of prison and started killing the people whose orders he'd been following. But he's looking for a different life as he walks in the park with a new friend and her daughter.

"And the little girl wants to hold his hand, and he finds the idea of it just terrifying, of being a normal person," Neville says. "You know, he's out with Marie McKenna for what should be a pleasant walk. Internally he's dealing with the killings that he's been a part of and that he's still part of."

In Neville's books, Fegan is connected by spidery plot lines to Detective Inspector Jack Lennon. Lennon is a Catholic who left college to join the Royal Ulster Constabulary. The Protestants, a majority on that police force, don't trust him. Catholics decide he is a traitor. His family disowns him. Lennon drinks, throws money away and has a fondness for prostitutes.

Lennon is not a likeable protagonist, Neville says: "Readers, I've found, have actually found him harder to sympathize with, as womanizer, than Gerry Fegan, who's a mass murderer. People are more ready to accept this man who's killed women and children then they were this man who couldn't keep it in his pants."

From Reader To Writer

Near the gardens, on Botanic Avenue, the No Alibis Bookstore is one of the few shops in the world specializing in crime fiction. Neville was a fan and a customer before he was a writer. Now he holds his book launch parties here. And when the superstars of crime fiction from the U.S. have a new release, this shop is on their tour. 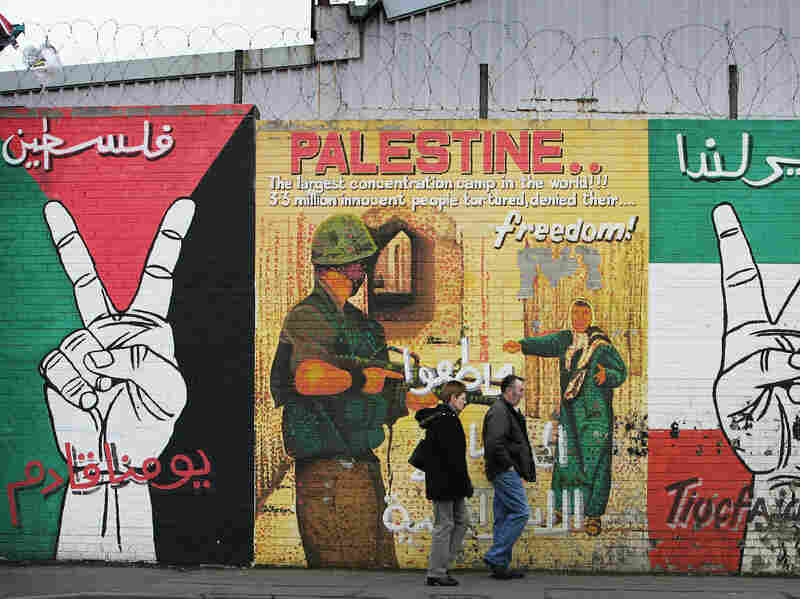 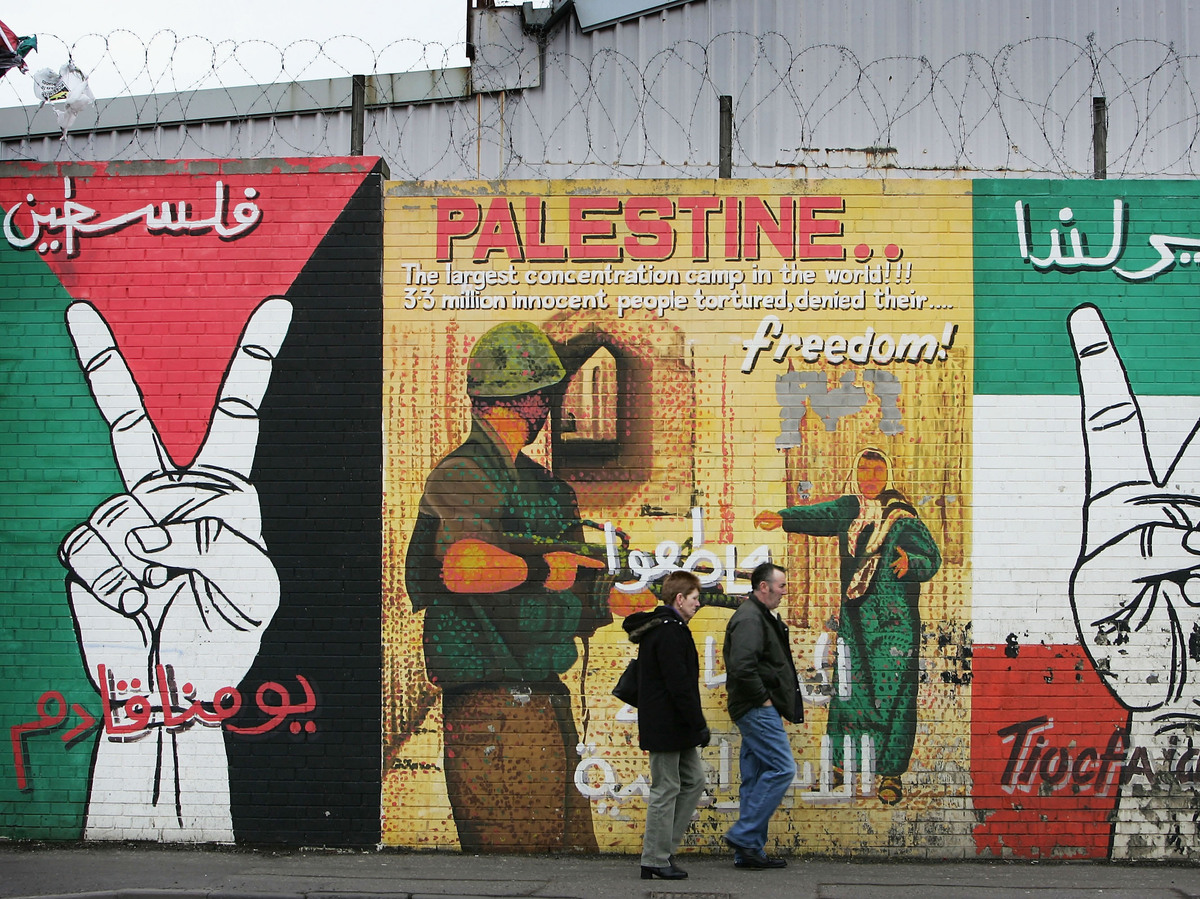 "Seven hundred people to come and see James Ellroy was an amazing turnout," says David Torrans, the owner of No Alibis. "And 400-plus for Michael Connelly and Robert Crais. Word gets back to authors; they can't believe this, so they want to come to Belfast, so long may it last."

Neville spent research time in bookstores and in libraries, as well as interviewing veterans of The Troubles — and riding in black taxis. Cab drivers sometimes give "Troubles Tours," showing passengers graffiti, murals, bombing sites and graveyards from Belfast's violent past. Today, cabbie Billy Scott drives Neville around the city to point out some of the sights.

Scott stops beside a looming concrete structure, 42 feet high, that runs for hundreds of yards. It's a "peace wall," built in the 1970s. 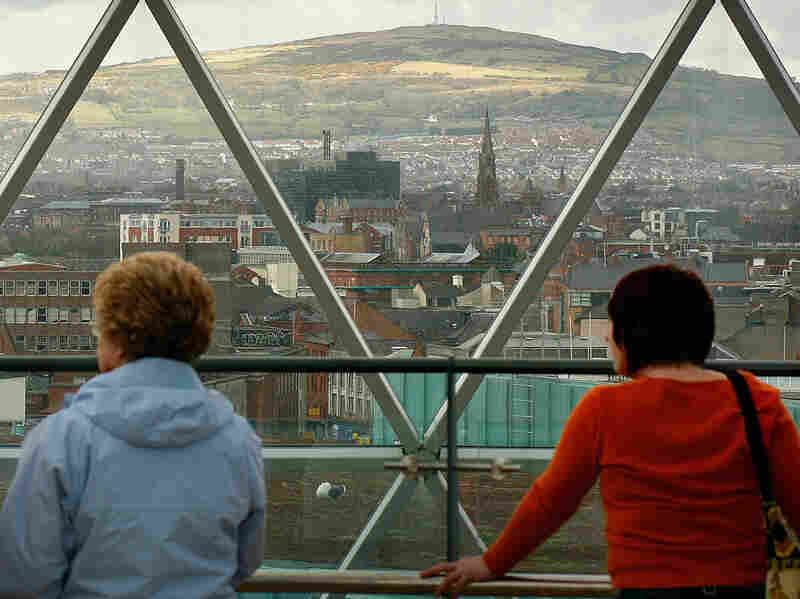 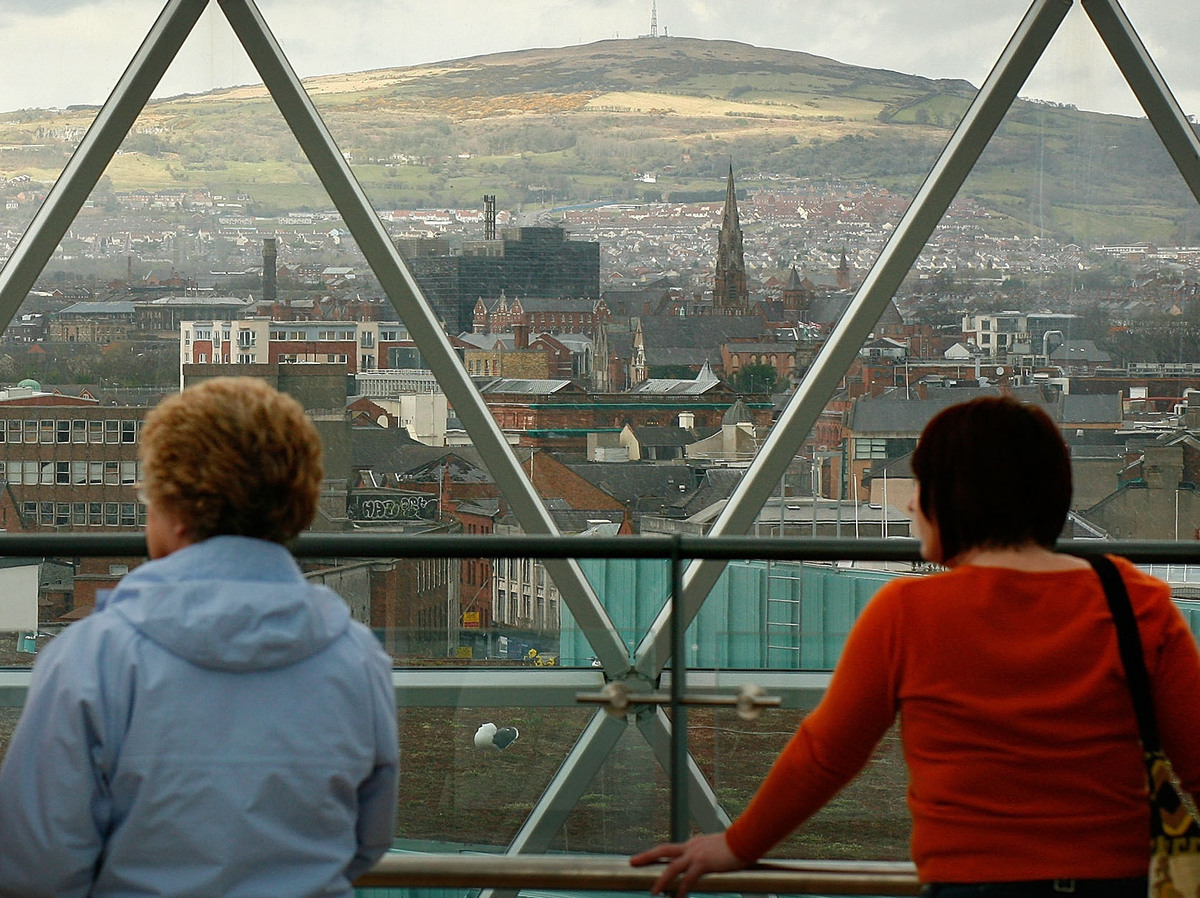 "This side here is Protestant," Scott explains, "and the far side of the wall there, that's all Catholic. See what would have happened, at the start of Troubles it was all burnt-out streets here: the alleyways, the entryways. So you had all the ammunition that the rioters needed, you know, the bricks and the stones. The burnt-out houses gave cover for the snipers for both sides."

During The Troubles and now, Belfast residents have responded to such violence by referring to "the cause." As Scott puts it, in a taxi-driver joke, "You'll never get mugged or robbed in Belfast. And if anything worse than that happens to you, don't worry, 'cause it's for the cause."

Out of the taxi, Neville walks through the downtown streets to the new Victoria Square Shopping Centre, which rises grandly in glass and metal four stories high. A place like this, he says, surely would have been a bombing target 30 years ago.

Looking Back On The Troubles

Poet Reflects On The Troubles Of Northern Island

Poet Reflects on the Troubles of Northern Island

A glass elevator leads to the observation deck. Neville looks out on a panoramic view of the city, and the shipyards and the waterways leading to the Irish Sea. From here, he can see many of the places he's written about. His book Stolen Souls opens with a bloody killing and a failed escape in the darkness of the Belfast waterfront.

"Galya Petrova, the young Ukrainian girl who's forced into prostitution in Belfast, she has killed one of her captors," Neville says. "She's brought — with the body of the man she's killed — by the human trafficking guy to the docks over towards the east there."

But there's certainly a brighter view available from the deck. You can see the new Titanic museum, honoring that ship's construction, and the vast soundstage for the HBO series Game of Thrones, which is based in Belfast.

Tourism is coming up fast: Sixty cruise ships will be stopping at Belfast Harbour this season. Back during the difficult times, people say, nobody came but backpackers.

While Belfast is no longer the burned-out city that it once was, The Troubles still overshadow the city's story. "We have this kind of strange, contradictory feeling about The Troubles," Neville says. "We're kind of ashamed of it, kind of proud of it at the same time."

And the aftermath of that bloody period continues to inspire new stories. Neville's next novel with Detective Jack Lennon, The Final Silence, comes out next April.

Read an excerpt of Ghosts of Belfast

Read an excerpt of Collusion

Read an excerpt of Stolen Souls