Accessibility links
Inside The Mind Of A Sociopath The word "sociopath" often brings to mind criminals, killers, and people who are cruel and heartless. But writer and diagnosed sociopath M.E. Thomas wants to challenge that conventional wisdom. She says sociopaths are not inherently evil, and can be incredibly productive to society. 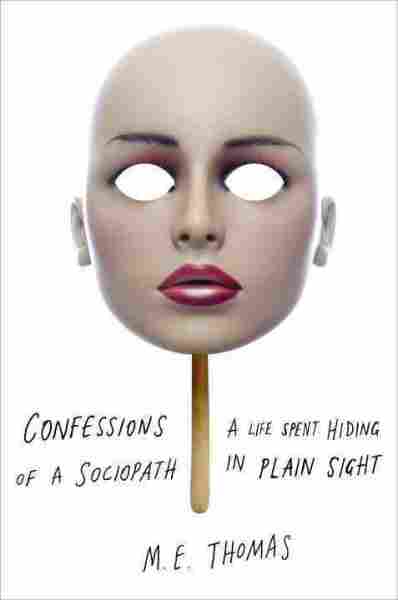 Confessions of a Sociopath

What exactly is a sociopath? Many people might think of killers, criminals, the cruel and heartless, Jack Nicholson's character in The Shining.

That's the common wisdom. But it's being challenged by a new memoir, Confessions of a Sociopath: A Life Spent Hiding in Plain Sight. It's written under the pen name of M.E. Thomas. The author says most sociopaths are not incarcerated — and the silent majority of them live freely and anonymously. They're your neighbors, colleagues, maybe even family members and lovers.

Thomas admits that sociopaths can be dangerous; they're hungry for power, and they don't feel guilt or remorse. But they're not inherently evil, and some are highly productive members of society. Thomas herself is an attorney, law professor and Sunday school teacher. She founded the website SociopathWorld.com.

On the key traits of a sociopath

"They can be very charismatic. They don't really get nervous. ... They tend to fail to conform to social norms. They might come off as a little bit of an independent thinker. Or they might be committing crimes, depending on who they are. They have a facility with lying — well, they lie frequently, obviously to cover up certain aspects of themselves, or things that would indicate that they are a sociopath. Probably the biggest characteristic of a sociopath is their lack of empathy. ... They can't really imagine or feel the emotional worlds of other people. It's very foreign to them. And they don't have conscience."

On whether sociopaths can have fulfilling, loving relationships

"Definitely fulfilling, and I think loving; we feel a love. You know, whatever it is that we feel affection, for me it's maybe 70 percent gratitude, a little bit of adoration, a little bit of — if it's a romantic relationship — infatuation or sexual attraction. I think a complex emotion like love is made up of all sorts of little emotions. And our particular cocktail of love is going to look or feel different to us, but it's still there."

On changing the way we view sociopaths

"I think that there really has been so little research done about sociopaths. And the common wisdom now is that they are untreatable. And that, you know, sociopathy is basically synonymous with evil. ... You know, statistically everybody has interacted with a sociopath at one point. But the fact that most people can't identify who a sociopath is or remember those sorts of interactions suggests to me that it couldn't have been that bad of an interaction, right? Most people interact with sociopaths in positive ways and don't realize it. It's only when we catch them, and they are in prison, and we have gone through this lengthy trial to point out all the bad things that they've done, that we start thinking that sociopaths are bad."

On realizing she's a sociopath

"I had just lost a job. I had just lost several relationships. And it wasn't the first time that something like this had happened to me, where my life seemed to just fall apart. And I thought, 'Well, I can't keep doing this — every few years have my life just go kaput. And so I thought, 'What is the common denominator here? It's me. There must be something that I'm doing that's causing this.' So I started going to therapy, and therapy didn't really help that much. ... But I remembered through therapy a casual diagnosis that one of my co-workers had made years before. And I explained to her how I viewed the world and my ethical principles, and she said very nicely, 'You might consider the fact that you are a sociopath.' So I looked it up, and I saw the traits, and it made sense. And it made sense in a way that nothing really before had."

On why she wrote the memoir under a pen name

"There's a huge stigma against sociopaths, and I wanted to protect my family a little bit as well. I have little relatives who share my last name, and they've done nothing really to bring any sort of notoriety to themselves."