Accessibility links
Movie Review - 'Unfinished Song' - Age And Mortality, Familiar Notes In An Unsatisfying Song Vanessa Redgrave and Terence Stamp anchor a bighearted if ultimately bromidic look at a couple faced with a diagnosis of terminal cancer — and the music that helps both of them come to terms with it.

Age And Mortality, Mournful Notes In A Familiar 'Song'

Age And Mortality, Mournful Notes In A Familiar 'Song' 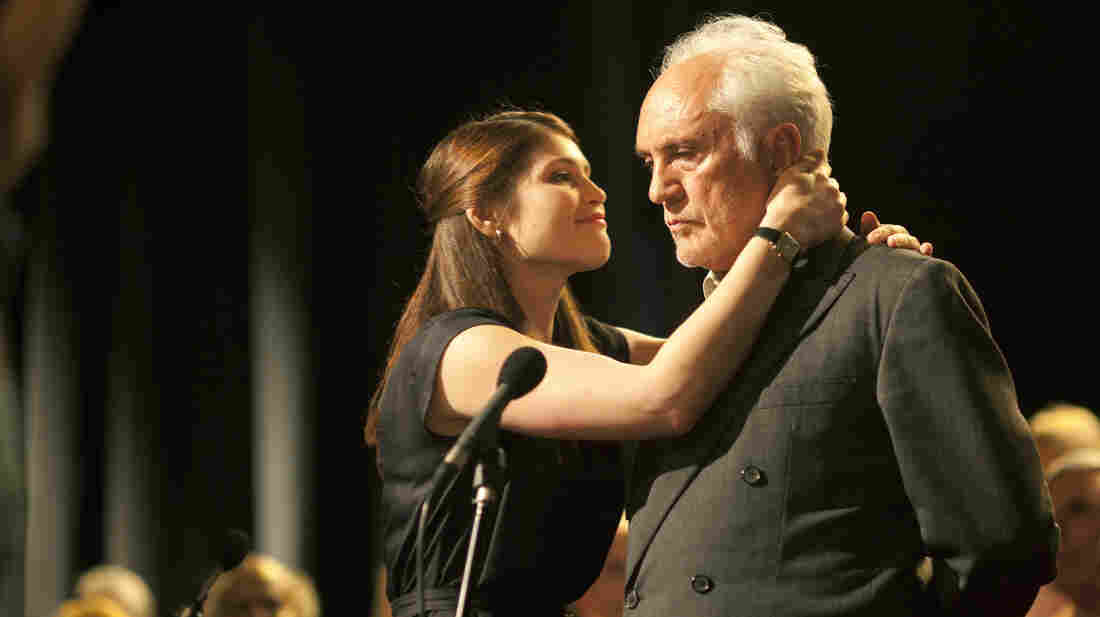 Gemma Arterton plays Elizabeth, the director of a senior citizens' choir that provides an outlet for curmudgeon retiree Arthur (Terence Stamp) and his wife, Marion, who's battling cancer. The Weinstein Co. hide caption 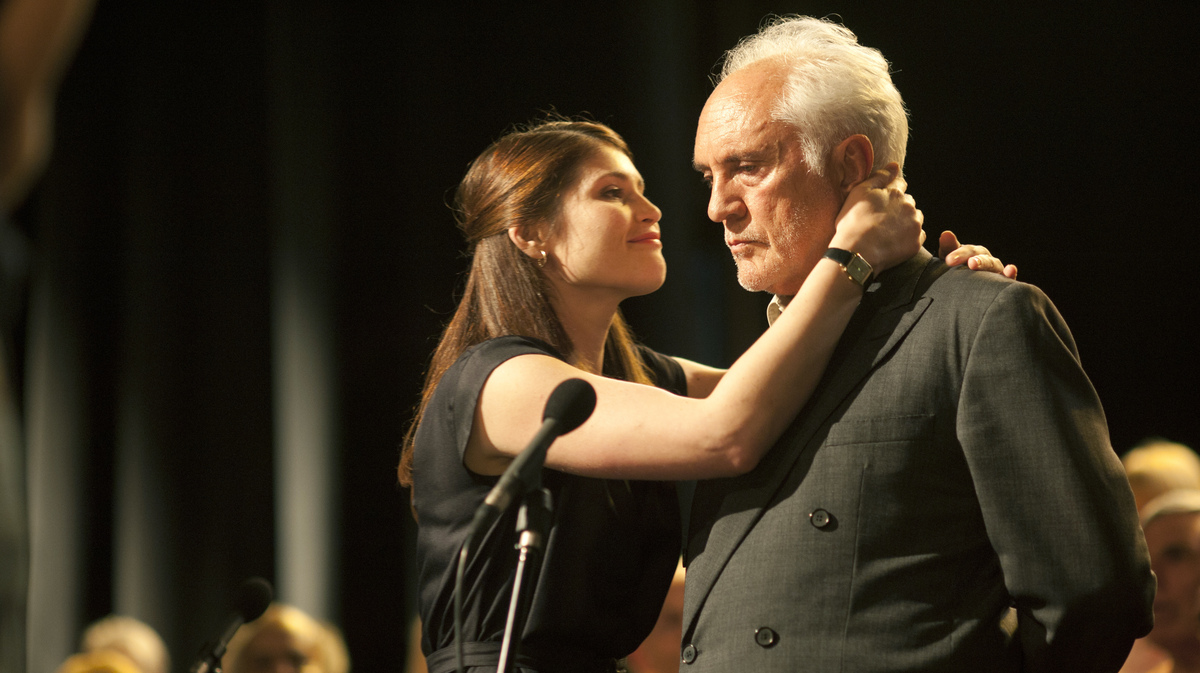 Gemma Arterton plays Elizabeth, the director of a senior citizens' choir that provides an outlet for curmudgeon retiree Arthur (Terence Stamp) and his wife, Marion, who's battling cancer.

Rated PG-13 for some sexual references and rude gestures

From 'Unfinished Song' - 'You Looked So Happy Today'

'You Looked So Happy Today'

From 'Unfinished Song' - 'Show Me Your Smile'

'Show Me Your Smile'

As a pitch, at least, Unfinished Song might raise a few eyebrows: Amour meets School of Rock. (Or Joyful Noise. Or Pitch Perfect).

Paul Andrew Williams' fourth film tells the story of Arthur (Terence Stamp) and Marion (Vanessa Redgrave), an elderly couple coping with the recent news that Marion's cancer is now terminal. The doctor has given her two months to live — just enough time for Marion to help her seniors' choir, the OAPz, qualify for a singing competition. Their name stands for Old Age Pensioners; the "z" is for spunk.

The premise is a far cry from that of London to Brighton, the 2006 feature that put Williams on the map. That film, set in a seedy London underworld populated by criminals and child prostitutes, began at full throttle, with a crying 12-year-old getting pushed into a seedy bathroom stall and being told, "Stay in there! Don't open the door for anyone!" — and still Williams showed himself susceptible to overwrought emotion and sentimentalism. In Unfinished Song, the intersection of aging, mortality and cheesy pop songs means those tendencies risk becoming significantly amplified.

The film begins with promise, though, particularly because Redgrave plays Marion with a moving mix of vulnerability and humor. She is the only source of joy in her household, Arthur being a gloomy presence with a permanent scowl and what you might call a dispassion for life. "You know how I feel about enjoying things," he tells his son, James (Christopher Eccleston), with whom he has a distant and rocky relationship.

He especially dislikes Marion's choir, ridiculing its repertoire, which as chosen by the group's enthusiastic young coach (Gemma Arterton) is not for the old at heart: When we first hear the group sing, it's tackling Gnarls Barkley's "Crazy." Later the singers shift to Motorhead.

Marion's scenes with Arthur early in the film suggest that, whatever cheesy resolutions may come, they will be grounded in a genuine human relationship. Arthur's moodiness aside, the two at first bring to mind Tom and Gerri from Mike Leigh's Another Year -- another older couple who offered a cheerful portrayal of married life that nevertheless felt attuned to real-life struggles. 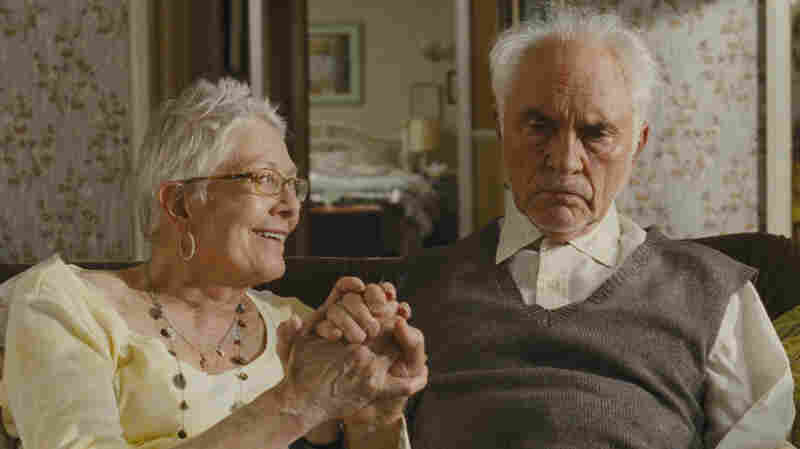 Vanessa Redgrave plays Marion, whose fondness for Elizabeth's choir will eventually draw Arthur in despite his killjoy inclinations. The Weinstein Co. hide caption 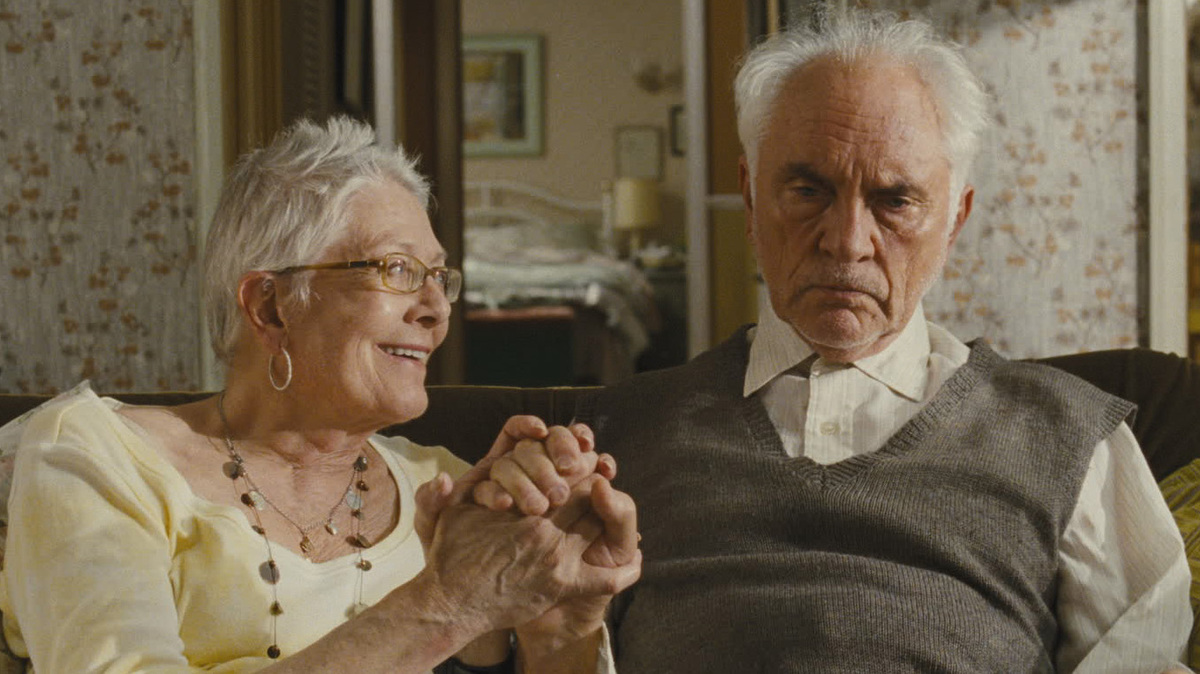 Vanessa Redgrave plays Marion, whose fondness for Elizabeth's choir will eventually draw Arthur in despite his killjoy inclinations.

Unfortunately, Unfinished Song doesn't stick to that template. As the film carries on, the choir becomes its central concern, the redemptive and rejuvenating power of song and dance its primary theme. Certainly one doesn't need to stick to Amour's cold approach or to the miserablism that some of Williams' fellow British directors are known for, to portray the imminent death of a loved one.

But Unfinished Song, which played festivals last year under the title Song for Marion, doesn't earn its sentimentalism; instead it rolls through a series of cliched life lessons that never come close to exploring the film's emotional territory with any depth or commitment.

At times the setups for moments of uplift or introspection get downright preposterous. When the choirmaster, in tears after being dumped, shows up at Arthur's door in the middle of the night for consolation, Arthur, gloomy though he is, nevertheless complies with the requisite platitudes — "You must hold steady, young lady. You are a good person. Good things will happen to you." Those are lines all too indicative of the empty bromides Unfinished Song throws out with increasing frequency in its second half.

Of course, even the most hardhearted Arthurs in the audience might crack a smile in the scenes where the OAPz sing "Let's Talk About Sex" or do the robot. But only those willing to blindly submit to the maudlin will be able to avoid rolling their eyes just as often. Slowly but surely, Unfinished Song devolves into its premise's worst-case scenario: a generic portrait of suffering, resilience, grief and reconciliation that, even in its postscript dedication — "To Family" — can't reach beyond safe, all-encompassing but ultimately unsatisfying sentiments.