Accessibility links
At A Texas Base, Battling Army's Top Threat: Suicide Suicide killed more U.S. troops last year than combat in Afghanistan, a trend that's likely to continue this year. The causes and remedies are complicated, but Fort Bliss in Texas has bucked the trend. Suicides have declined there, after implementation of an interactive suicide prevention program. 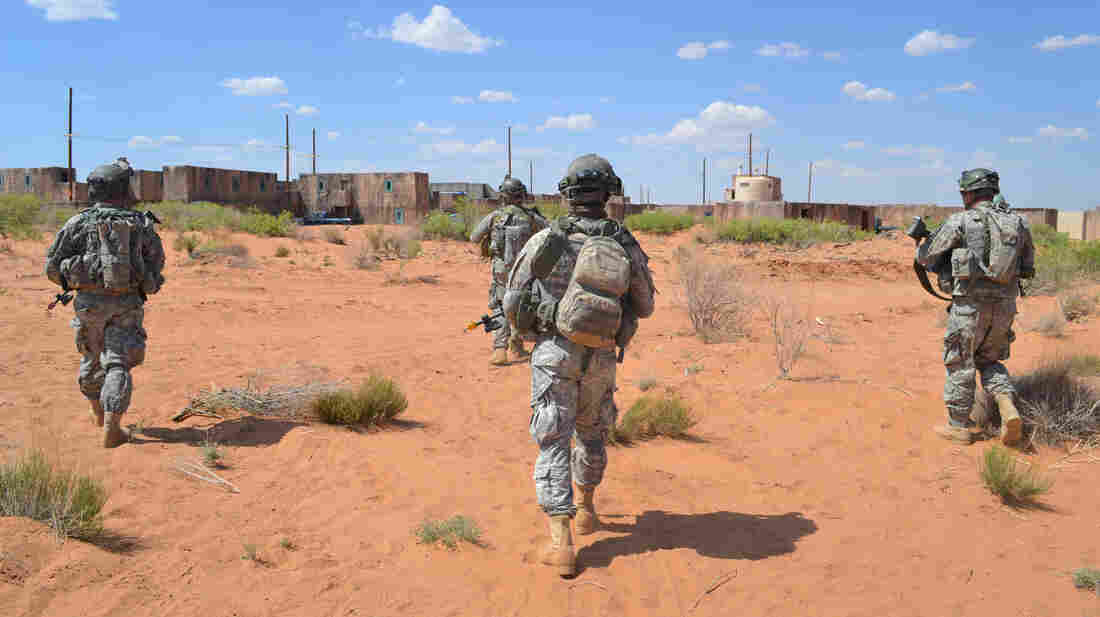 Soldiers advance toward a simulated Afghan town during a training exercise at Fort Bliss in El Paso, Texas, in 2012. While the suicide rate is rising in the military, it's declining for troops stationed at Fort Bliss, thanks in part to efforts to ramp up suicide awareness and prevention training. Brendan Johnson/Flickr hide caption 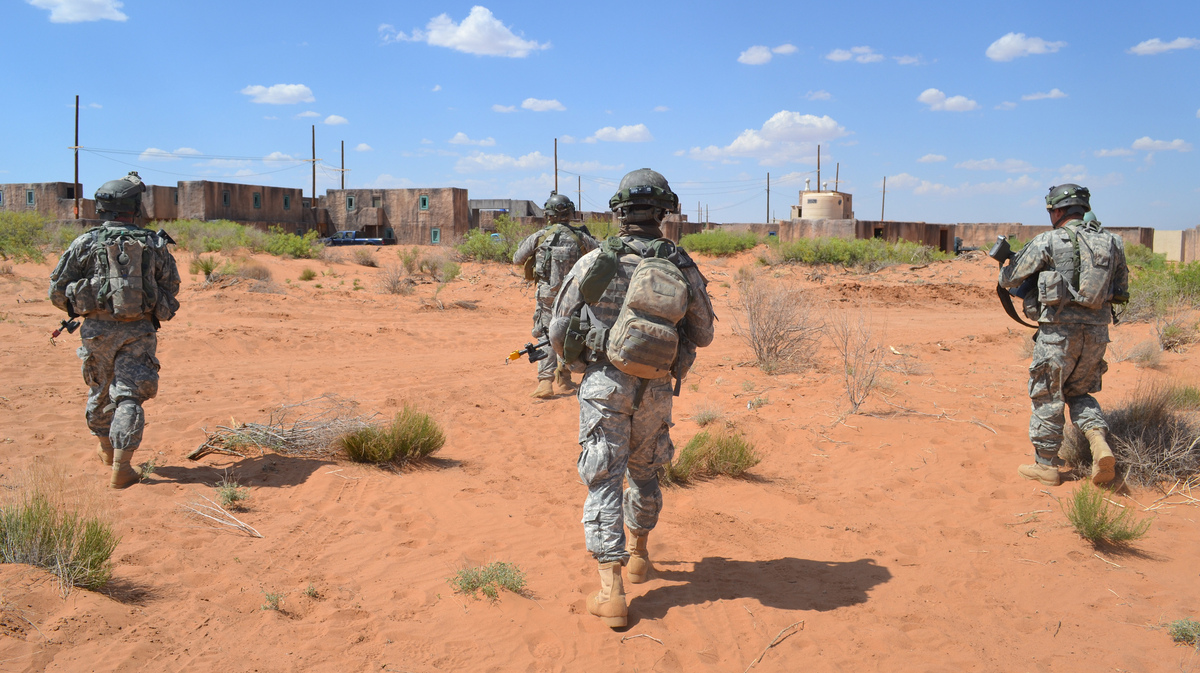 Soldiers advance toward a simulated Afghan town during a training exercise at Fort Bliss in El Paso, Texas, in 2012. While the suicide rate is rising in the military, it's declining for troops stationed at Fort Bliss, thanks in part to efforts to ramp up suicide awareness and prevention training.

Suicide killed more American troops last year than combat in Afghanistan, and that is likely to be the case again this year.

According to the Pentagon, there were at least 349 confirmed suicides in 2012, compared with 310 U.S. combat deaths in Afghanistan in the same period. 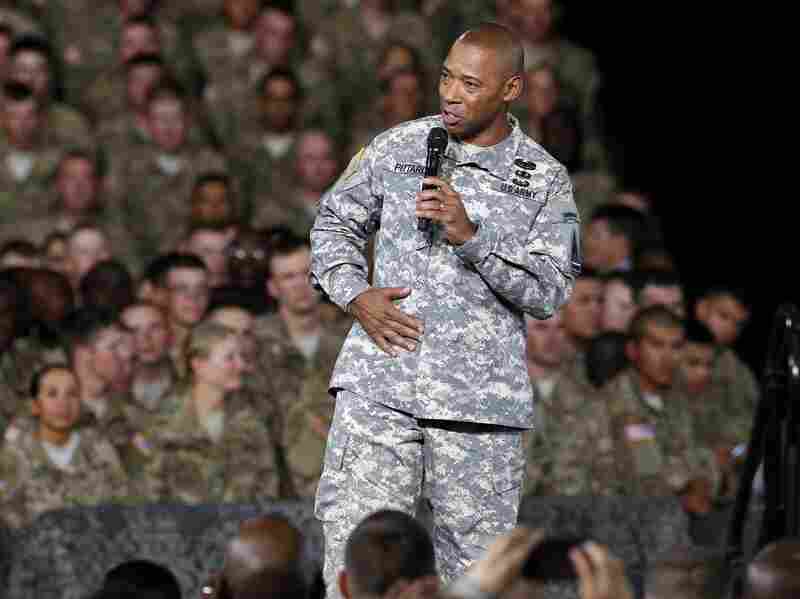 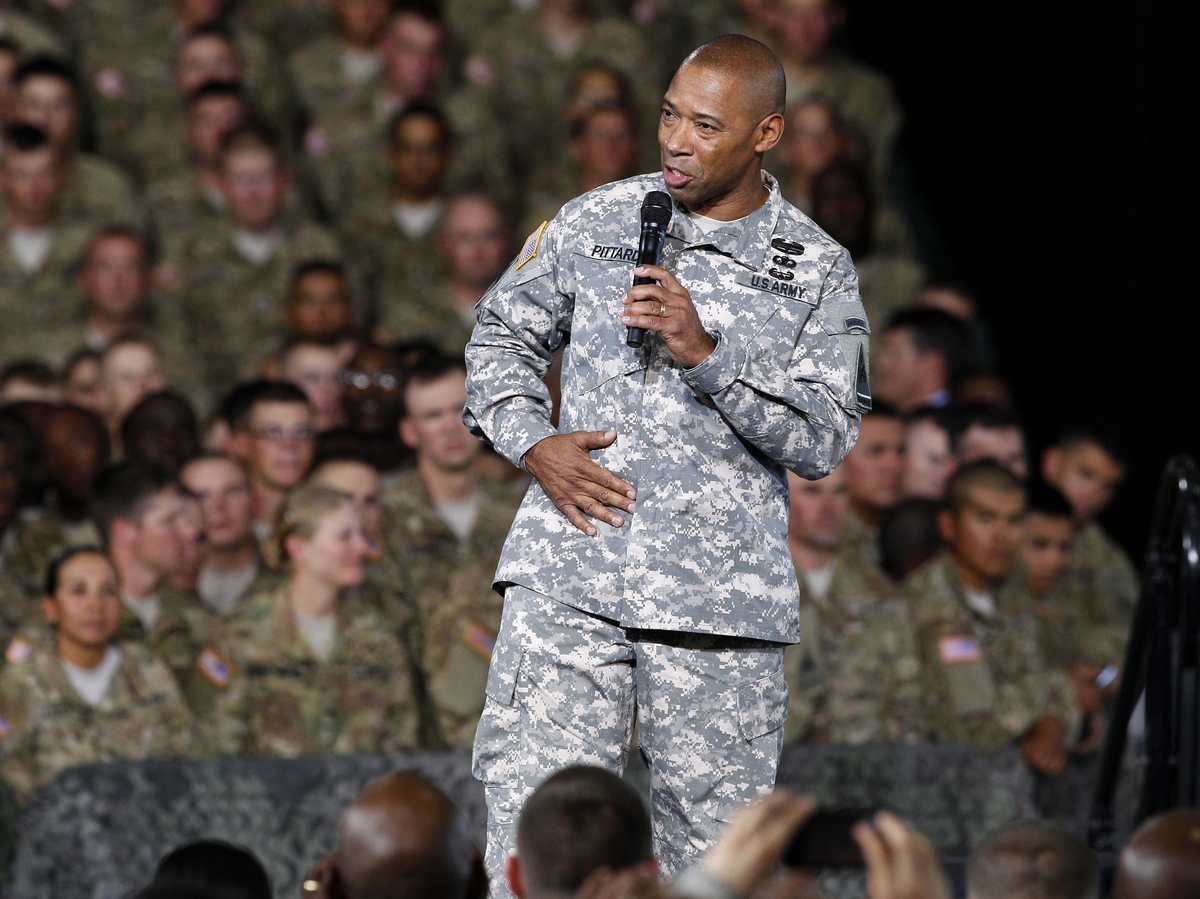 The causes and remedies of the suicide epidemic are complicated, but one Army base in Texas has bucked the trend: At Fort Bliss, the suicide rate actually went down last year. In fact, it's declined consistently over the past three years: down to five suicides in 2012 from 12 in 2010.

"It was kind of a no-brainer," says Maj. Gen. Dana Pittard, who last month finished three years as the top commander at Fort Bliss. "Our focus was getting our soldiers to [get] help."

"In 10 years, only one case [of suicide at Fort Bliss] that we know of ... took place when a soldier was in treatment," says Pittard.

Pittard has battled to overcome the military's macho culture that considers reaching for help a sign of weakness. He mandated that all troops arriving at Fort Bliss take a two-day suicide awareness and prevention course that was different from the training used by the rest of the Army.

The program, which uses a more interactive approach, including role-playing, stresses action and intervention by peers to help troubled soldiers. But asking if someone feels suicidal is just the first step.

"That is the hard part. Ask the questions," says Storey Smith, a social worker, who teaches suicide prevention at Fort Bliss.

Army Staff Sgt. Kevin Allen grew up in a military family. His older brother Jason joined the Air Force, and then a couple years later, in 2001, Kevin joined the Army. The two brothers — best friends — still talked on the phone constantly.

Confidential chat at MilitaryCrisisLine.net or text to 838255.

"We took Verizon to the cleaner when they offered us unlimited minutes," Kevin says. "I'd drain my phone and then take my wife's phone. We would talk nonstop."

During Kevin's two Iraq deployments, the brothers lost the ability to stay in such constant contact.

But in 2009, things were looking up. Jason was out of the Air Force and living near their parents in Jackson, Ohio. Kevin was home from Iraq and stationed just a six-hour drive away in Maryland.

That spring, they weren't talking as much as Kevin had hoped. Then a strange phone call coincided with a day of Army training — a dull PowerPoint course on suicide awareness.

"I have to be honest, I couldn't have cared less about the training. And nobody in the room could," Kevin says. "We sat through it every single year." 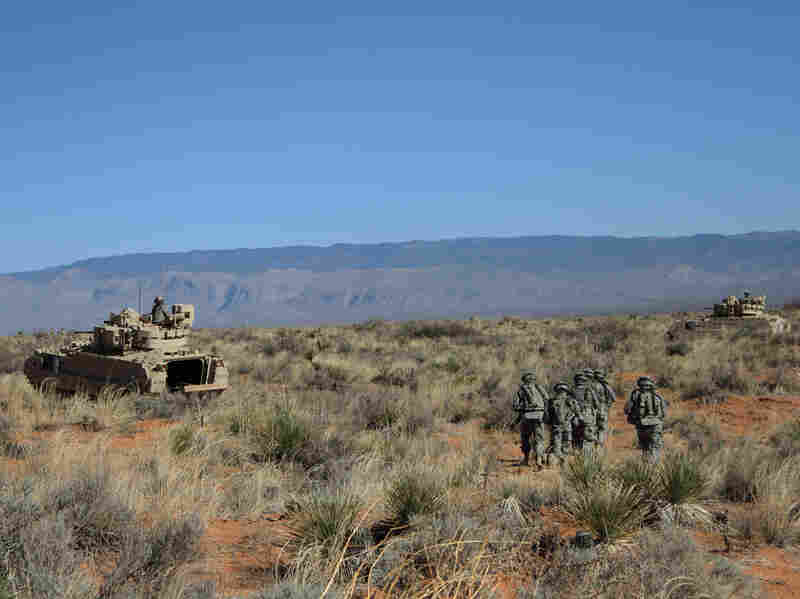 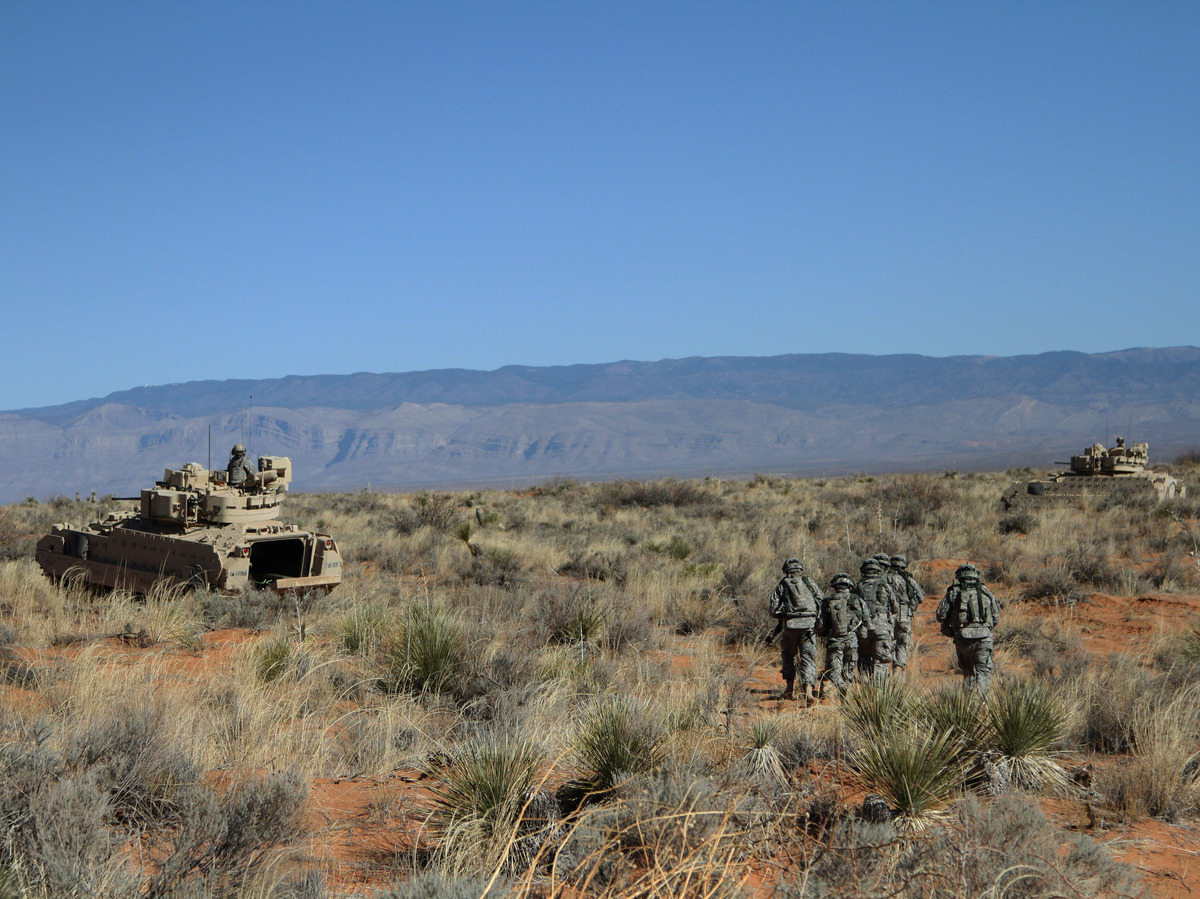 But that evening, Jason called for the first time in weeks. The subject of the conversation was mundane, but the tone was off.

"He's talking about the cost of inkjet printers. Going on and on, typical conversation. Something just struck me. It was his demeanor; I couldn't really enunciate just what it was," Kevin says. "Then it hit me: I think he's suicidal."

Kevin got permission from his superior and then drove through the night to Ohio. The whole way he was grappling with a question.

"What if he said, 'Yes, I'm going to kill myself' but then refused any other services. Was I prepared to call the sheriff on him?" Kevin says.

It took all weekend. Kevin bought a case of beer and took his brother out to burn a brush pile for their dad. They sat by the fire, drinking.

"I finally turned to him and said, 'Jason, we need to talk. What's going on?' He looked at me and I knew that he knew what I was going to say. But he just got up, and walked away. And that was the end of my nerve," says Kevin. "It was like every bit of the fears that I had that he was going to reject me for this, that confirmed them."

The next morning, the brothers said goodbye in the rain. Kevin Allen drove back to Maryland. Jason Allen killed himself a week later.

Kevin says he's played the moment over endlessly in his head, thinking about what he could have done differently. Three years later he arrived at Fort Bliss. He dreaded the idea of another suicide prevention course. But it wasn't the same old PowerPoint presentation. Soldiers role-play through the awkward process of asking questions and taking action with someone contemplating suicide.

"I truly believe that had I had that training, that I can't guarantee that my brother would be alive, but I know for a fact that that night sitting out by a bonfire, every bit of my actions would have been different," Kevin says.

The training also teaches that anyone can be at risk, which highlights a surprising fact: Half of the suicides in the military are troops who never saw war. While PTSD and brain injuries from combat are contributing factors, it remains stubbornly hard to predict who will fall victim.

"Most people with any given risk factor never attempt [suicide]," says the National Institute of Mental Health's Michael Schoenbaum, who studies military suicide. "Suicide is not like food poisoning, where you find out what is in the salad bar and you go remove the tuna salad."

After A Marine's Suicide, A Family Recalls Missed Red Flags

After Years Of Struggle, Veteran Chooses To End His Life

Other factors are the same as in the civilian world: relationships, drugs and alcohol, or money problems.

"It just got overwhelming, to the point where I didn't know what to do," says a Fort Bliss soldier who asked to use only his nickname, "Sgt. D."

His commanding officer says Sgt. D is a great soldier; he never showed any signs he was in trouble. But this April, with bills stacking up and a relentless workload, Sgt. D saw no solution.

He was at home on the patio; his wife was out, his two young kids inside. He started thinking about how to kill himself. If a gun had been handy, Sgt. D says, he might well have used it.

Instead, he called a soldier in his unit, Spc. Katherine Kline.

"I opened up to her and burst out in tears, telling her I don't feel like being here anymore," Sgt. D says.

They'd both had the suicide prevention training, so perhaps on some level Sgt. D chose to call someone who would listen, and do something.

Kline got her commanding officer; after calling the MPs, they headed to Sgt. D's house.

"After it happened and we got there, and I saw that he was OK, I was like, what if he wasn't going to do it, like I just made this big mess for nothing," Kline says. "But at the same time, I was thinking, what if I never see him again. When he hugged me all the fears went away, and I was like, 'OK I did the right thing.' "

Sgt. D is still on active duty and is receiving counseling. With the support of his commander, he's considering an Army program that helps enlisted men train to become officers.

Around the country, Army bases are implementing aspects of Fort Bliss' multipronged approach. The much larger bureaucracy of the Pentagon is moving a bit more slowly, with a framework for suicide prevention due at the end of this year.