Accessibility links
Philippines Pulverizes Ivory To Discourage Traffickers The Philippines is a stopover for dealers trying to unload illegal ivory into the Asian black market. On Friday, the government destroyed 5 pounds of confiscated ivory. 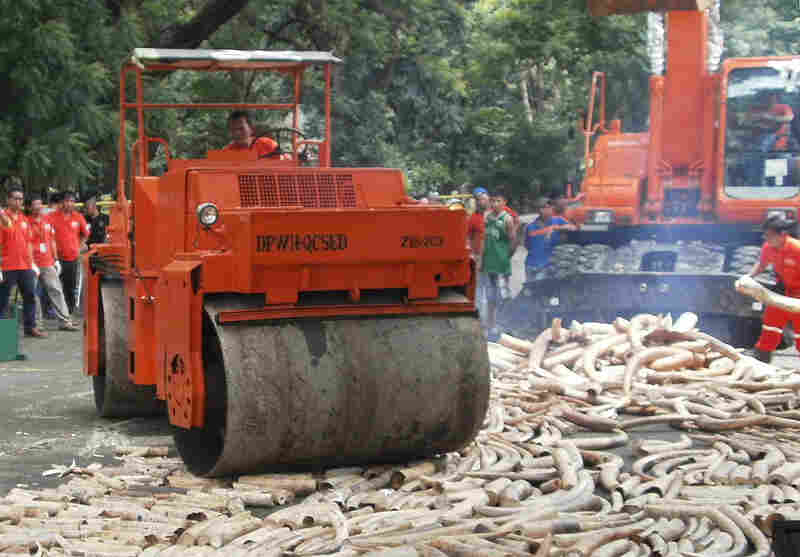 A steamroller tries to flatten tusks, without much luck. Simone Orendain hide caption 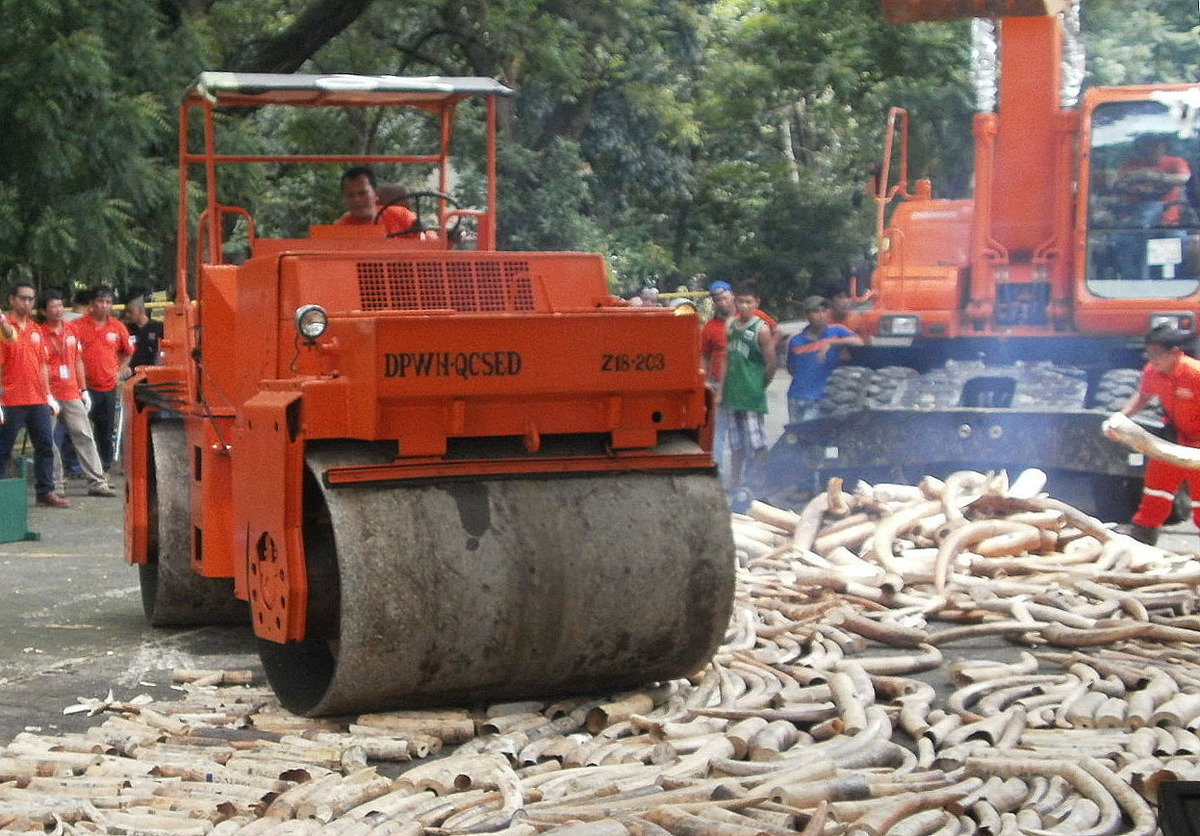 A steamroller tries to flatten tusks, without much luck.

Poached ivory is destroying wild populations of elephants and rhinos across Africa and Asia. The strong demand for ivory takes an estimated 25,000 elephant lives each year.

Now, the government of the Philippines is sending a message to poachers and smugglers, by destroying five tons of ivory confiscated in the country. On Friday, environmentalists, government officials, and the public gathered in Quezon City to witness the pulverization.

"We want to send a strong message that we're against the illegal trade of ivory, these are all contraband." says Theresa Mundita Lim, Director if the Protected Areas and Wildlife Bureau of the Philippines. Her country's ivory stockpile is spread out on the ground; thousands of disembodied tusks turning a shady parking lot into an elephant graveyard.

First a steam roller crunched over the tusks, but the surprisingly durable ivory withstood the pressure until a backhoe took over, stabbing with the toothy side edge of the bucket. 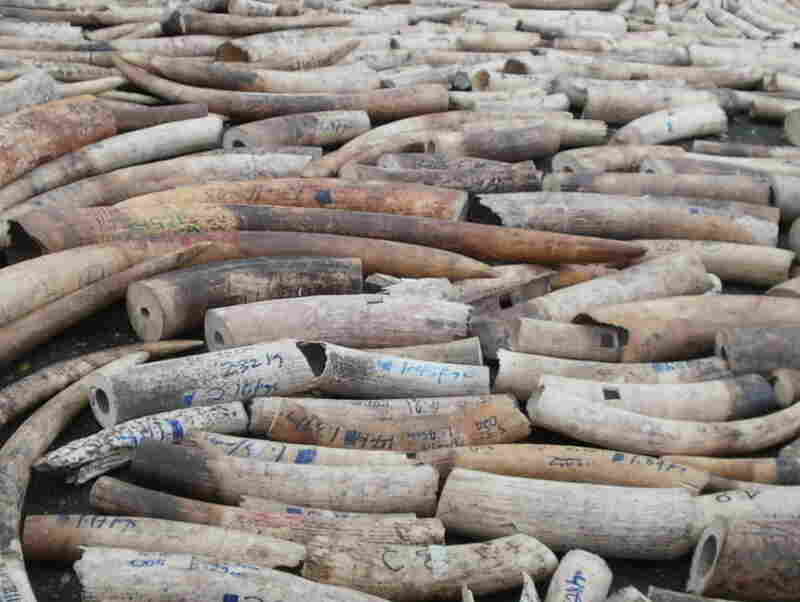 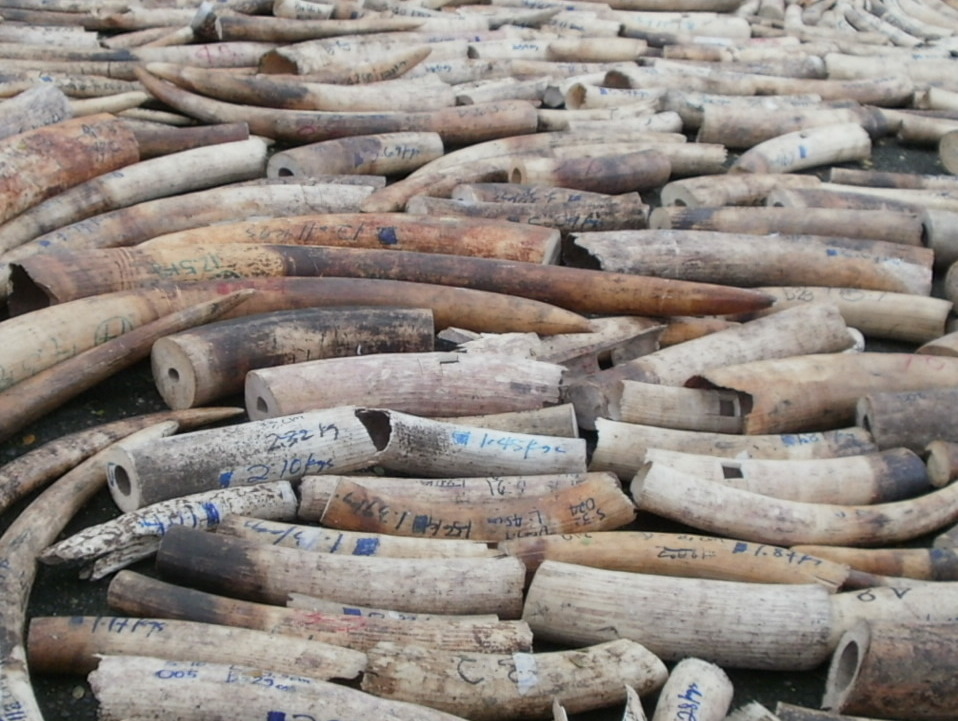 Labeled tusks, ready to be crushed.

Smashing removes any chance that the confiscated ivory could back into the marketplace- corrupt officials have been known to pilfer from government warehouses. The Philippines is a major stopover for ivory dealers entering the Asian black market, and Filipinos also buy the ivory to make religious carvings.

The dramatic scene and loud snaps of shattering ivory brings home an issue that seems like a far-away problem.

"If only one child realizes here in the Philippines, what he's seen on TV or books are actually real animals." explains Mundita Lim. "And if he tells his parents 'Please don't buy that ivory', that's good enough impact for us."