Accessibility links
For Sharpest Views, Scope The Sky With Quick-Change Mirrors A technology called adaptive optics is enabling astronomers to peer into space as never before. The specialized telescopes, which have mirrors that can adjust their shapes up to 1,000 times per second, compensate for the blurring that happens when light passes through Earth's atmosphere. 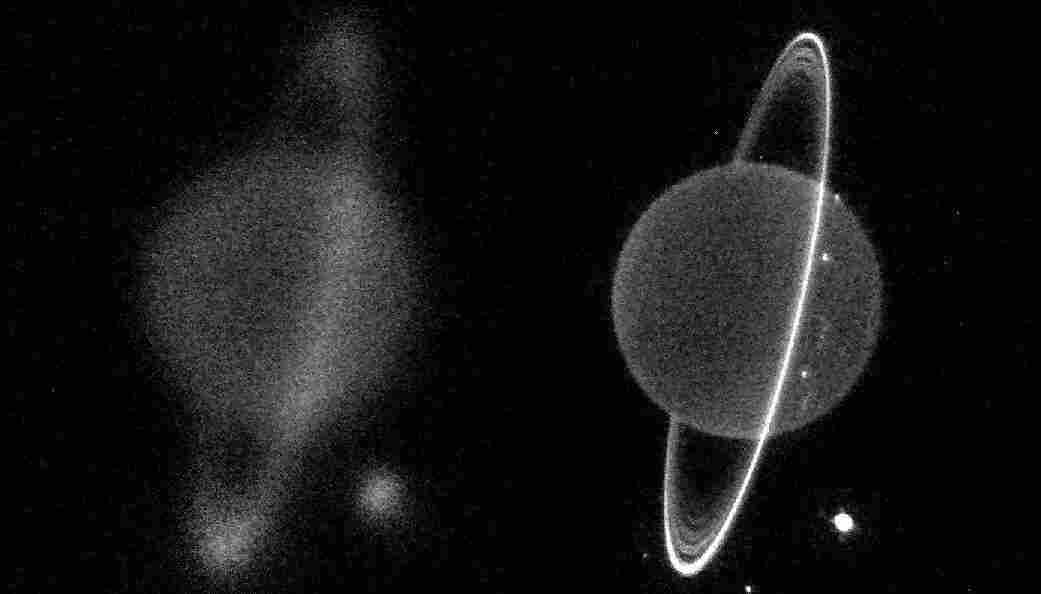 Before And After: These near-infrared images of Uranus show the planet as seen without adaptive optics (left) and with the technology turned on (right). Courtesy of Heidi B. Hammel and Imke de Pater hide caption 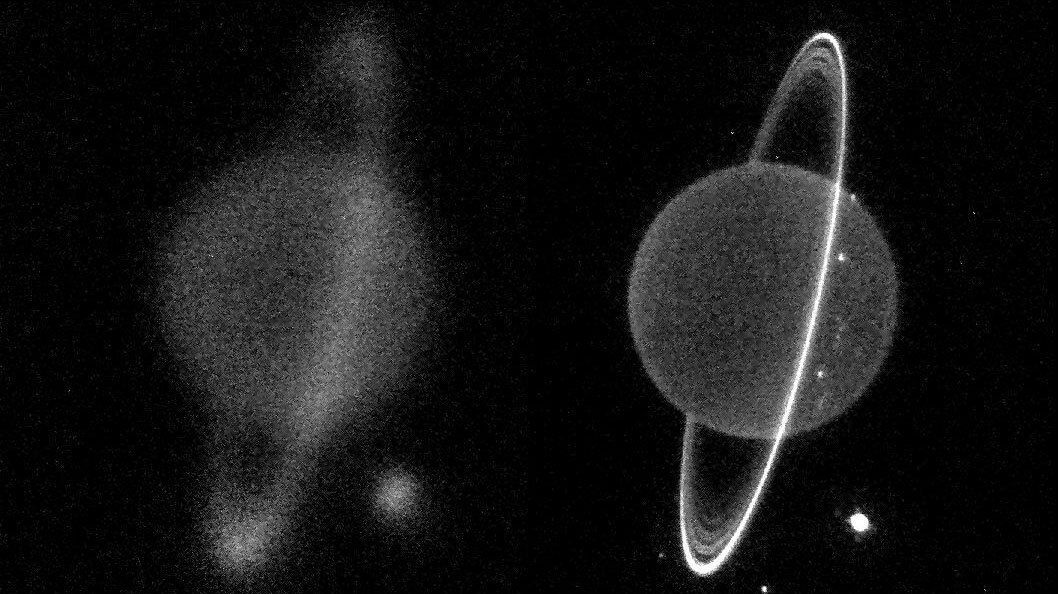 Before And After: These near-infrared images of Uranus show the planet as seen without adaptive optics (left) and with the technology turned on (right).

Courtesy of Heidi B. Hammel and Imke de Pater

It used to be that if astronomers wanted to get rid of the blurring effects of the atmosphere, they had to put their telescopes in space. But a technology called adaptive optics has changed all that.

Adaptive optics systems use computers to analyze the light coming from a star, and then compensate for changes wrought by the atmosphere, using mirrors that can change their shapes up to 1,000 times per second. The result: To anyone on Earth peering through the telescope, the star looks like the single point of light it really is.

The reason the atmosphere blurs light is that there are tiny changes in temperature as you go from the Earth's surface up into space. The degree to which air bends light depends on the air's temperature.

"Adaptive optics has really revolutionized so many fields of astronomy," says Andrea Ghez, an astronomer at the University of California, Los Angeles. But such systems did not start out as tools for astronomers. "It was part of the strategic defense thinking of the nation, of what we could do to get better images of what was out in space," says Robert Duffner, author of The Adaptive Optics Revolution: A History.

During the Cold War the United States became concerned that the Soviet Union might be developing weapons that would be put into orbit. "The Air Force was interested in using telescopes on the ground to look up through the atmosphere to get clearer images of space objects — mainly satellites and missiles," says Duffner.

Adaptive optics technology sharpens images by changing the shape of telescope mirrors up to 1,000 times per second. Here, the planet Uranus is seen without (left) and with adaptive optics. Courtesy of Heidi B. Hammel and Imke de Pater hide caption

Adaptive optics technology sharpens images by changing the shape of telescope mirrors up to 1,000 times per second. Here, the planet Uranus is seen without (left) and with adaptive optics.

Courtesy of Heidi B. Hammel and Imke de Pater

The Air Force had other ideas for adaptive optics besides looking at satellites. One of them involved shooting down missiles.

The notion was to aim a laser beam from the ground toward a relay mirror in space. "The mirror could then deflect the laser beam and send it to an incoming missile," says Robert Fugate, a scientist with the Air Force Research Laboratory at Kirtland Air Force Base in Albuquerque, N.M.

The hitch with such a plan, Fugate says, was that the atmosphere would smear out the laser, diluting its destructive power. Adaptive optics offered a solution. You can think of it as the reverse of compensating for the atmosphere in a way that makes starlight appear to be a single point. In this case, instead, the scientists would smear out the laser light so the countering distortions in the atmosphere would then bring it back to a narrow beam. That was the theory. In practice, the system was never built.

In 1991, the military agreed to declassify most of the work it had been doing with adaptive optics, so astronomers could take advantage of what the Air Force had learned. In the last two decades, the technology has brought some remarkable achievements.

"One of the most exciting recent ones is the study of planets outside our own solar system," says UCLA's Ghez. "Just 15 years ago, we didn't know about any planets around stars outside our sun. Now, not only do we know about them, but we can take a picture of them with this technology."

The technology is also valuable for looking at objects closer to Earth. "It's really interesting to look at planets within our own solar system. We send satellites out to study these planets in detail. And yet if we can point a telescope from the ground at these planets, like Saturn, or the moons of Jupiter, we can study them in equal detail to what the satellites might be doing," says Ghez.

She doesn't study planets. Ghez studies the giant black holes that exist in the center of galaxies. Adaptive optics has blown that field wide open, too. "You can actually see the stars that reside right around the black hole, and you can see matter falling into the black hole thanks to this technology," she says.

This pair of images of the Galactic Center, the rotational center of the Milky Way galaxy, shows how adaptive optics technology can sharpen a telescope's view. Courtesy of the Keck Observatory hide caption

There's just one problem. For adaptive optics to work, you need a bright enough star to make the corrections on. So, until recently, if you wanted to explore a patch of sky with no bright star, you were out of luck. But scientists have figured out a workaround — they create artificial stars using a laser. "We shine a laser up into the atmosphere, and there's conveniently a very thin layer of sodium atoms up at 90 kilometers," Ghez says. "And this laser can stimulate those atoms to shine like a star. And then we can look at that star — that artificial star — and make the corrections."

The use of adaptive optics is also transforming vision research. Austin Roorda is at the optometry school at the University of California, Berkeley, and says that the cornea, lens and fluid inside the eye distort light, just as the atmosphere does. By analyzing that distortion, he says, scientists can use optics to "un-distort" the light, so the cells at the back of the eye no longer appear blurry during eye exams.

Adaptive optics could let a doctor see individual damaged cells at the back of the eye, Roorda says, and offer an important new tool for diagnosing and treating eye diseases like macular degeneration and retinitis pigmentosa. And there's more, he says. "We may have a tool that will allow us to measure the efficacy of a treatment, [and] that may slow the degeneration of those cells, and even restore those cells' function."