Accessibility links
Why The AR-15 Is More Than Just A Gun For some, it's a symbol of America's might. For others, it's a frightening weapon of warfare. For many target-shooting hobbyists, it's "the Mr. Potato Head of firearms" — customizable to fit each individual. And it's all part of what is now a nearly billion-dollar business in military-style weapons. 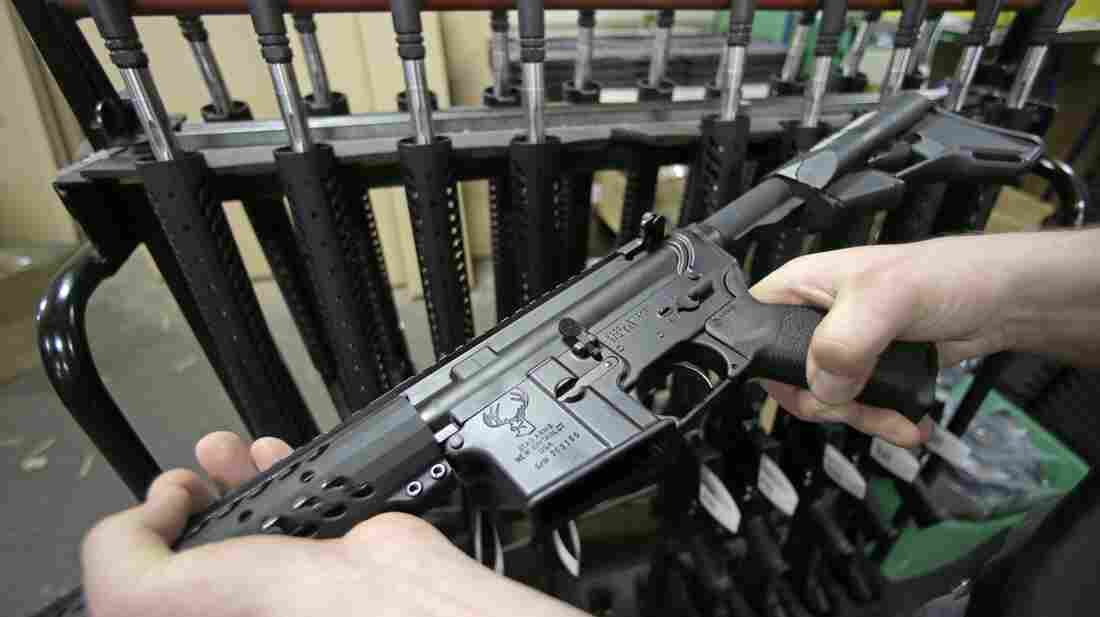 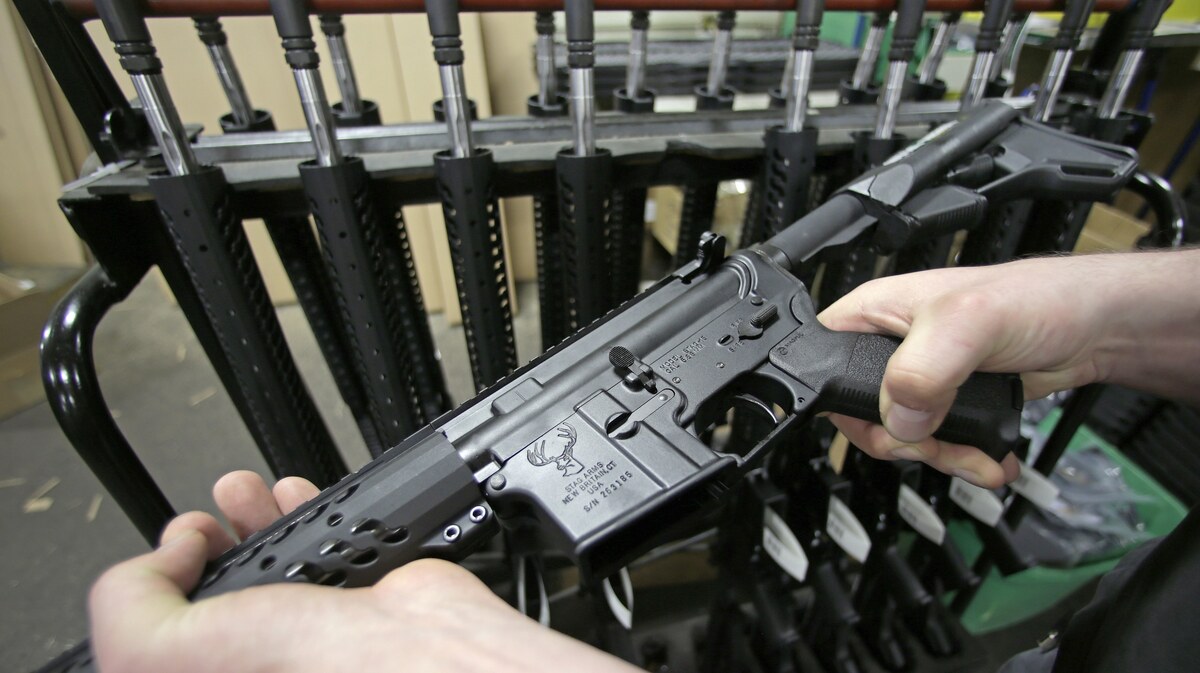 Vice President Joe Biden and Senate Majority Leader Harry Reid insist that gun control legislation is not dead — they say they're strategizing on how to bring the issue back to the Senate floor.

Even if it does return, one proposal unlikely to survive is an assault weapons ban. Military-style assault rifles now form a nearly $1 billion industry supported by gun owners who spend thousands of dollars collecting these firearms.

And while the gun-rights lobby keeps invoking the right of "self-defense" to defend Americans' right to buy these guns, home protection is low on the list of reasons gun enthusiasts keep buying military-style weapons.

'They Picture You As Some Kind Of Militant Freak'

There's a lot of name-calling in the gun control debate. Gun control advocates are slammed as elitist, urban liberals who want to take everyone's guns away. Gun rights people are accused of being paranoid rednecks who think the government is out to get them. And then there are the special labels reserved for people who love their assault rifles.

"You know, they picture you as some kind of militant freak. And that's not me," says Mike Collins, who owns more than a dozen military-style rifles with his wife.

Collins wants you to understand something: He is a rational, intelligent, regular guy.

"I spent 27 years in the military," he says. "I defended this country all over the world. I've been in multiple combat tours. I'm not a nut. I'm not a crazy guy. I'm just a normal person who enjoys shooting."

And for Collins, target practicing with an AR-15 is a hobby.

Next to Collins at the shooting range at Clark Brothers Gun Shop in Warrenton, Va., is Jason Glascock, who says if more Americans knew what it was like to shoot these weapons, they would see these guns can actually be good, clean fun.

"The AR — it's America's gun. It's what our troops carry. It's been our military firearm," Glascock says. "It's our, if you will, symbol around the world, this gun."

The fully automatic version of this gun — the M-16 — was introduced by the U.S. military during the Vietnam War. The AR-15 is semiautomatic, which means you need to squeeze the trigger for each bullet.

Glascock was 3 years old when he started shooting a .22 caliber with his grandfather. By 5 years old, he moved on to shotguns. He started collecting military-style guns when he turned 18, and he just built an AR-15 for his 19-year-old son last Christmas. 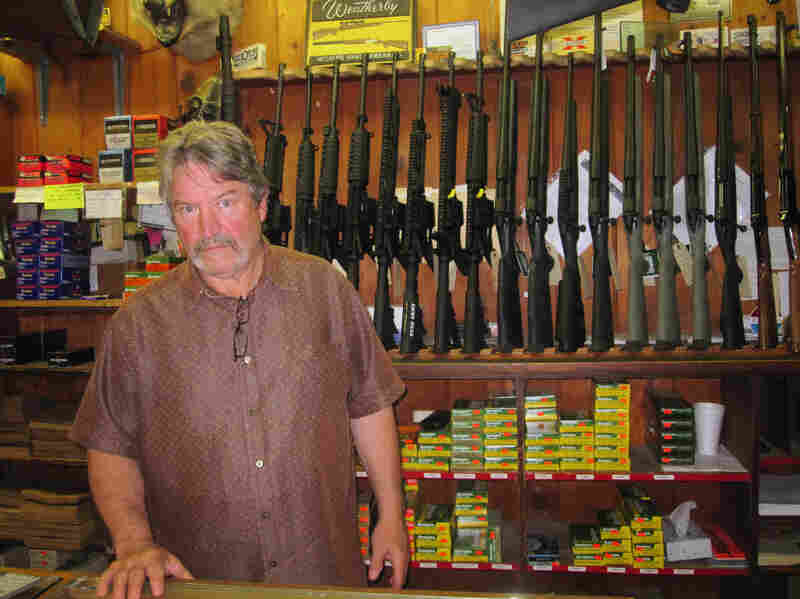 "We've always sold more guns when Democrats are in office than we ever sell when Republicans [are] in office," says Mitch May, the general manager at Clark Brothers Gun Shop in Warrenton, Va. Ailsa Chang/NPR hide caption 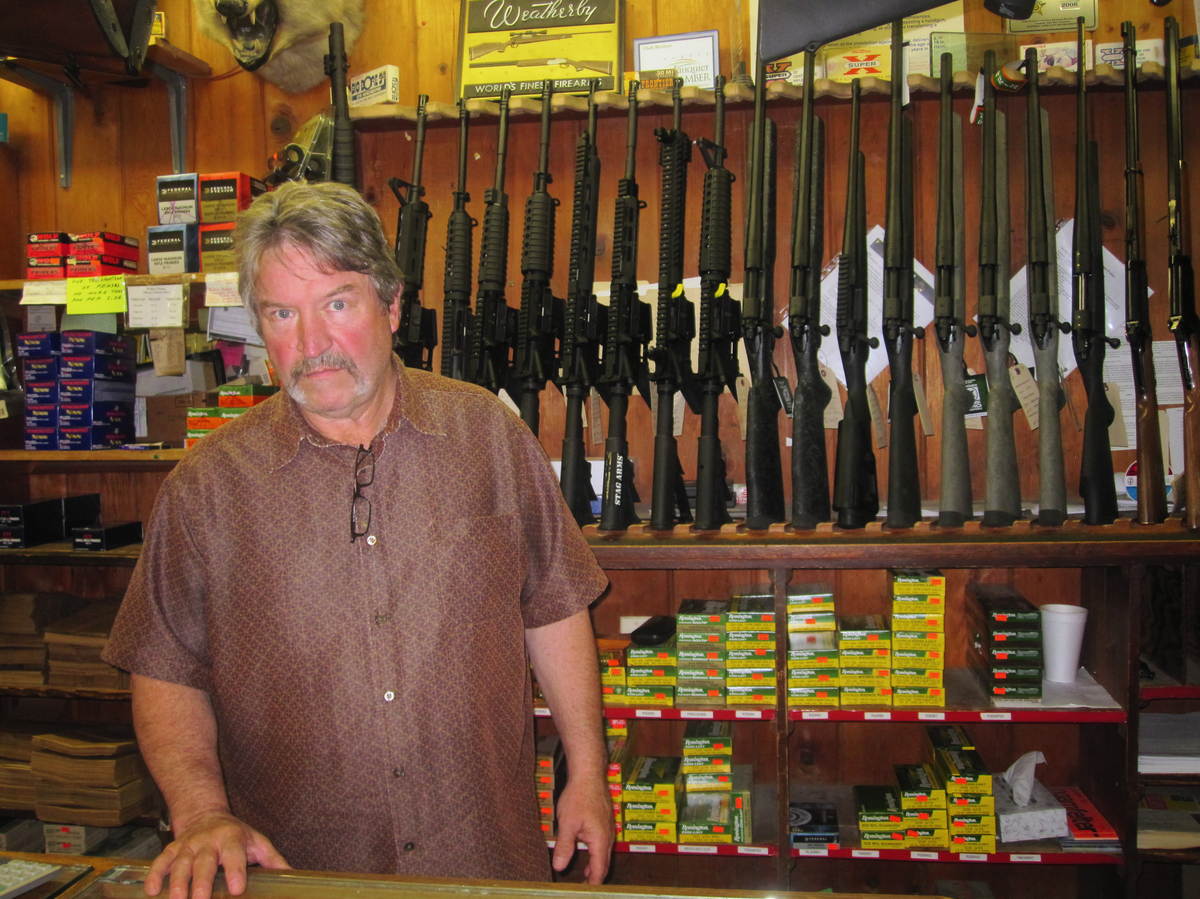 "We've always sold more guns when Democrats are in office than we ever sell when Republicans [are] in office," says Mitch May, the general manager at Clark Brothers Gun Shop in Warrenton, Va.

'The Mr. Potato Head Of Firearms'

When Glascock explains why he keeps collecting military-style guns, he doesn't bring up self-defense or hunting. His eyes light up when he talks about all the fun ways you can customize an AR-15: flashlights, scopes, night vision, even an attachable beer-bottle opener. You can get the gun in neon green or with zebra stripes if you want. The accessories can cost more than the weapon itself, which starts at around $800.

Collins says when he modifies his AR-15, it's like a guy souping up his car.

"This is the man's Barbie doll — you know, the Mr. Potato Head of firearms," Collins says, "because you can interchange so many different things to make it customized to you, to be able to make it comfortable when you shoot."

But this Mr. Potato Head is deadly. The AR-15 was the gun used by Adam Lanza when he opened fire in Newtown, Conn., last December. Twenty-six people were killed, including 20 first-graders. Everyone was shot more than once — as many as 11 times. And that's what the military wanted out of this gun — the ability to kill even without good aim, a weapon with high-capacity ammunition magazines that could spray bullets within close to medium range.

"Those design features in a civilian market have horrific consequences," says Tom Diaz, a gun control advocate who has long followed the commercialization of military firearms. "So you can call it whatever you want — tactical rifle, black rifle, assault rifle, modern sporting rifle. It has the capability that the military wanted for warfare."

Instruments Of Warfare In The Civilian Market

How did warfare enter the civilian market? AR-15 rifles were sold to the public as early as the 1960s, but Diaz says their popularity really took off in the 1980s, after Chinese manufacturers began exporting the AR's Russian counterpart — the AK-47 — to the U.S. And then pop culture helped the market along. Television shows like Miami Vice made military-style firearms look sexy.

Military-style rifles have now ballooned into a nearly billion-dollar business. The main gun industry group, the National Shooting Sports Foundation, tells NPR these weapons represent almost 20 percent of the entire industry's revenue. Data that the NSSF provided to NPR show imports and production of these weapons almost quadrupled in the past 10 years. After semi-automatic pistols, military-style rifles represent the next hottest-selling category of guns.

"AR-style modern sporting rifles are a major contributor to the success of the American firearms industry, no question," says Mike Bazinet of the NSSF.

In advertisements for these guns, there's a common message: Get in touch with your inner GI Joe. For example, a Web commercial from Sig Sauer features soldiers in combat boots crouching with their assault rifles next to military Humvees.

Bazinet says, despite these ads, the gun industry is not driving the market for military-style weapons — instead, it's the consumers who are clamoring for them.

But gun control advocates aren't buying that. Diaz says the industry is filling a demand it was forced to create. Data from the General Social Survey, a public opinion survey conducted every two years, show the percentage of American households that own guns is declining. Diaz says kids these days would rather pick up a video game than a hunting rifle.

"It's just a fact that hunting has been in serious decline, so those kinds of guns just don't sell as well," he says. "Well, you're in business, you got to sell something. These assault rifles — these military-style rifles — appeal to a broader range of people."

So he says the industry pounced on these products to stay relevant. With fewer households to sell to, Diaz says gun makers have to keep coming up with newer, sleeker, more high-tech weapons for people who already own guns.

Now, more than 30 gun companies make AR-15s. Almost 8.5 million assault rifles have been either manufactured in the U.S. or imported here since the 1990s, according to the NSSF.

Gun dealers like Clark Brothers Gun Shop say someone comes in to buy one of these rifles almost every single day they're open.

"We've got guys that come here on their 18th birthday and buy an AR-15 — the first gun they ever bought," says Mitch May, who has been the general manager at Clark Brothers since 1962. "Just because it's a gun that the military uses, and they want to have one just like it, but they don't want to join the Army to get it."

After the shootings in Newtown, May says he couldn't keep the AR-15 in stock. Between December and February, he estimates he probably could have sold 40 AR-15s per week. Even if most people think a federal assault weapons ban has slim hopes of passing any time soon, the mere threat of a ban always brings in great business.

"We've always sold more guns when Democrats are in office than we ever sell when Republicans [are] in office," says May. "And we all here ... and everywhere else in the gun business vote Republican every time."