Accessibility links
Supreme Court: Congress Has To Fix Broken Voting Rights Act The court declared part of the 1965 law unconstitutional on Tuesday, effectively striking down a process that put states with a history of voting discrimination under extra federal oversight. 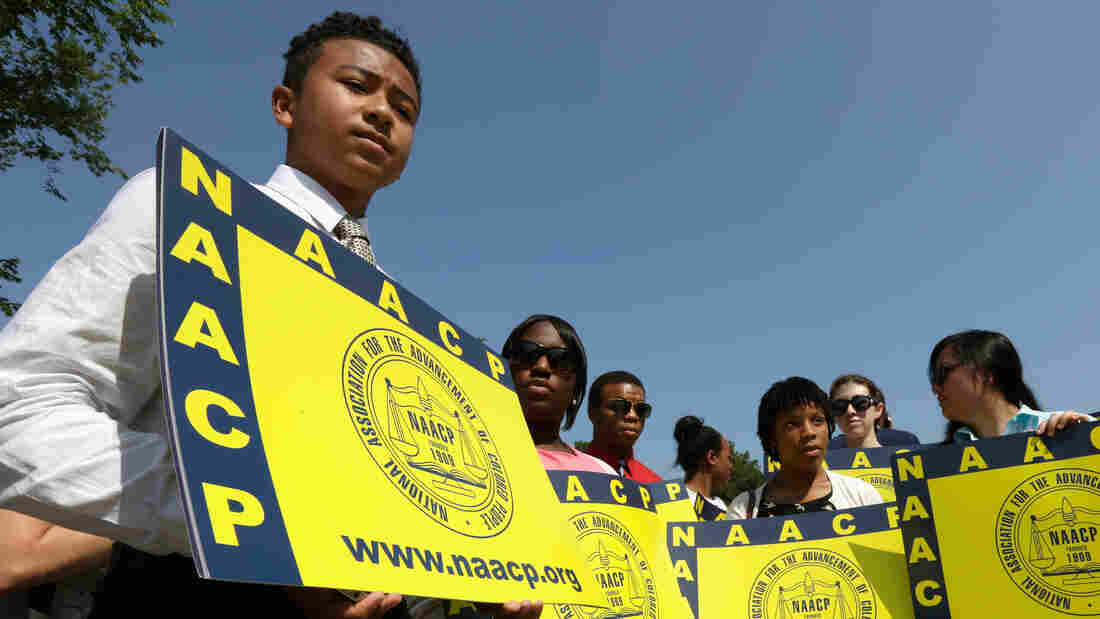 Supporters of the NAACP hold signs outside the Supreme Court building on Tuesday. The court ruled that Section 4 of the Voting Rights Act, which aimed at protecting minority voters, is unconstitutional. Win McNamee/Getty Images hide caption 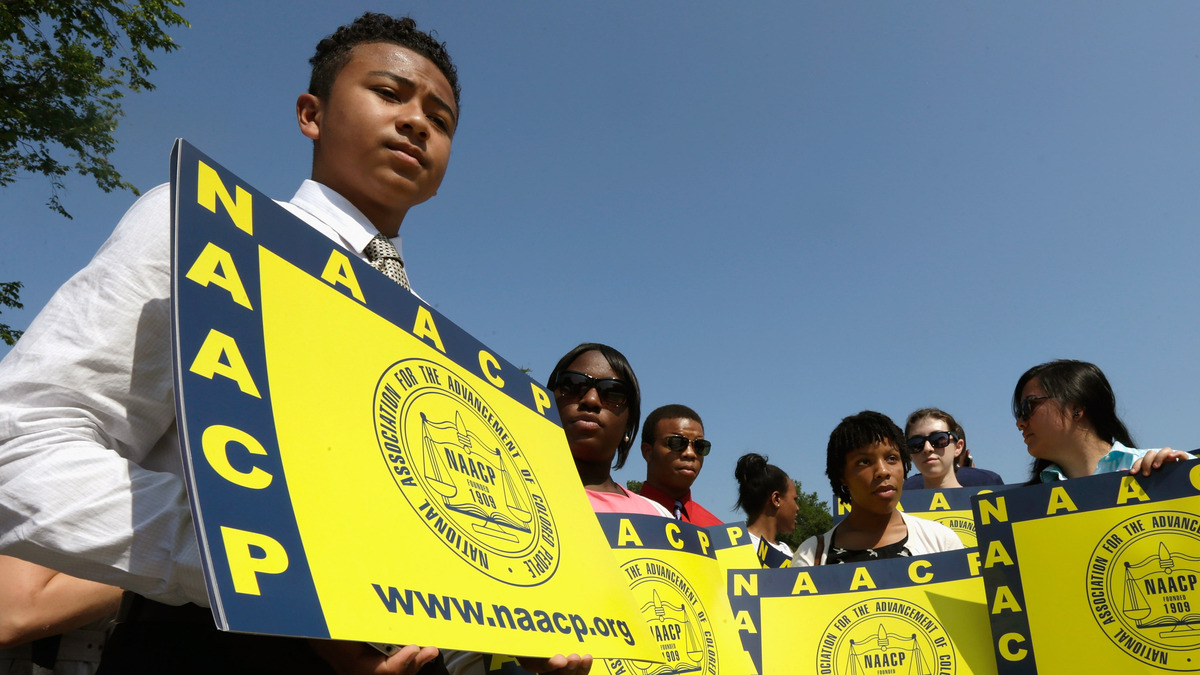 Supporters of the NAACP hold signs outside the Supreme Court building on Tuesday. The court ruled that Section 4 of the Voting Rights Act, which aimed at protecting minority voters, is unconstitutional.

By a 5-to-4 vote, the court invalidated the formula — adopted most recently in 2006 — used to determine which states had to get federal approval for changes in their voting laws.

The decision provoked dismay and outrage in the civil rights community.

"Today the Supreme Court stuck a dagger in the heart of the Voting Rights Act of 1965," said Rep. John Lewis, who was brutally beaten during a 1965 march for the right to vote in Selma, Ala. "History is relevant because voting rights have been given in this country, and they have been taken away."

That, he observed, is what happened after the Civil War, when the right to vote and hold office in the South was supplanted with 100 years of segregation, violence and Jim Crow laws.

The Voting Rights Act, widely viewed as the most effective civil rights legislation in American history, is unique in the way it treats jurisdictions with a record of racial discrimination in voting.

The law applies to nine states, mostly in the South, as well as parts of seven other states, and it requires any changes in voting laws or procedures in the covered jurisdictions to be approved in advance by the U.S. Justice Department or a federal court in Washington, D.C. A jurisdiction with a clean record for 10 years is permitted to bail out from the law's mandate.

'Our Country Has Changed'

Writing for the five-justice majority, Chief Justice John Roberts noted that in 1965 when the law was enacted, only 7 percent of eligible African-Americans registered to vote in Mississippi, while in 2004 the number was up to 76 percent. Despite these and similar numbers in other states covered by the law, he said, Congress did not change the coverage formula when it extended the law in 2006.

"In 1965, the states could be divided into two groups: those with a recent history of voting tests and low voter registration and turnout, and those without those characteristics," Roberts said. "Congress based its coverage formula on that distinction. Today, the nation is no longer divided along those lines, yet the Voting Rights Act continues to treat it as if it were."

In Alabama, Voting Decision Seen As Sign Of Progress, Setback

The coverage formula therefore unconstitutionally invades the sovereignty of the covered states and, based on outdated data, imposes on them a burden that it does not impose on other states.

"Our country has changed," the chief justice said, "and while any racial discrimination in voting is too much, Congress must ensure that the legislation it passes to remedy that problem speaks to current conditions."

He also noted that Congress is still free to design a new and modernized coverage formula — something that it has not done in the past largely because it was politically impossible. No new jurisdiction wants to be labeled a bad actor under a new formula. And leaders of both parties said repeatedly in 2006 that the law's existing system worked well.

Joining Roberts' opinion on Tuesday were Justices Anthony Kennedy, Samuel Alito, Antonin Scalia and Clarence Thomas. Thomas wrote separately to say that he would have struck down more than the coverage formula. He would have invalidated the concept of pre-clearance as unconstitutional, too, and he pointed to language in the chief justice's opinion that would allow the court to invalidate the pre-clearance provision even if the coverage formula is rewritten.

Reaction to the ruling was swift in the civil rights community and elsewhere.

Sherrilyn Ifill, president of the NAACP Legal Defense Fund, called the decision "a game changer" that "leaves virtually unprotected minority voters in communities all over this country." Standing outside the Supreme Court immediately after the decision was announced, she said, "We will not soft-soap it. This is a real threat, but we believe strongly Congress can fix it."

"I am hopeful that new protections can and will pass this session of Congress," Holder said. "This is not a partisan issue, it's an American issue — because our democracy is founded on ensuring that every eligible citizen has access to the ballot box."

Privately, though, most voting-rights experts are more than skeptical that the current polarized Congress can enact any fix.

As a political matter, it's "a nonstarter," says Yale Law professor and voting specialist Heather Gerken.

Voting-rights expert Richard Hasen of the University of California, Irvine, calls the pre-clearance section of the law "effectively dead."

"It's hard for me to imagine that Congress is going to come up with any new kind of new coverage formula," he says.

Instead, Hasen says, states with records of discrimination are likely "to flex their muscles, putting more controversial voting laws into place."

Experts note that while civil rights groups may be able to challenge some new laws in the courts, the laws will go into effect while the legal battle is fought out.

"The sword of Damocles is no longer hanging over them," says Gerken, referring to Southern jurisdictions.

That is as it should be, says voting-rights authority Abigail Thernstrom. She says there was a time that discrimination in the South was horrific and violent, but that time has passed.

"If you ask anybody, black or white, on the street in Selma, 'Well, have things changed since 1965?' I mean they would look at you as if you were crazy," Thernstrom says. "This is not a disputable fact. It's a different era. It's a different region. Thank God."

Indeed, Chief Justice Roberts pointed out in his opinion for the court that Selma now has a black mayor.

Thernstrom echoes another theme in the court's opinion, saying that states are entitled to their sovereignty and to equal treatment. Now, she says, these states are "free."

"They're out of the penalty box, and it will be legal business as it's usually conducted," she says. "They can pass whatever changes they think are desirable, and if there is an objection to these changes from, let's say the civil rights community, they can go into court."

New York University's Richard Pildes agrees, at least in part, opining that "the fear of how drastic the consequences will be for political participation are understandable, but much further out there than what is likely to happen on the ground."

Princeton University professor Julian Zelizer points out that this is the first time a civil rights bill that had been normalized and "essentially become part of the landscape" has taken a "significant hit" at the hands of the high court.

"So you see this strategy of making the court more conservative starting to pay off," he says.

Duke Law School's Guy-Uriel Charles says he thinks the court's decision may have some nasty consequences, provoking partisan fights, with both Republicans and Democrats using the issue to turn out their respective bases.

There was already some evidence of a partisan divide on Capitol Hill on Tuesday, as some key Republicans applauded the court's decision and Democrats condemned it.

Notwithstanding all of that, there was a real sense of sadness in the civil rights community. Stanford Law professor Pamela Karlan has litigated many a civil rights case under the Voting Rights Act, and she sees little hope that Congress will be able to reconstruct the law.

The Voting Rights Act, she says, "gave real meaning on the ground to the guarantees that we fought the Civil War over, and so that's how America was transformed — not just by the Constitution but by these congressional statutes that put the Constitution into action."

"The Supreme Court has just struck down the crown jewel of the Voting Rights Act," Gerken says, adding that the court "has just announced what is the end of the civil rights movement ... and that's a big deal."

There was also a sense of sadness expressed by the four-justice minority on the Supreme Court. Justice Ruth Bader Ginsburg — as she has several times in recent weeks — took the unusual step of dissenting not just in writing but from the bench.

The question in this case, she said, is, "Who decides?" Congress or the court? The post-Civil War amendments, she observed, are not like many other provisions of the Constitution that treat Congress with suspicion. The First Amendment, she noted, says "Congress shall make no law ..." In contrast, the 15th Amendment "instructs that the right to vote shall not be denied or abridged on account of race, and it vests in Congress the power to enforce that right by appropriate legislation."

In this case, Ginsburg continued, Congress in 2006 held 21 hearings over a 20-month period and amassed documentation totaling 15,000 pages before it reauthorized the Voting Rights Act and its coverage formula, with almost no dissent.

Summing up, Ginsburg quoted Martin Luther King Jr.: "The arc of the moral universe is long, but it bends towards justice, if there is a steadfast commitment to see the task to completion." That commitment, she said, has been "disserved by the majority's decision."

Joining her in dissent were Justices Stephen Breyer, Sonia Sotomayor and Elena Kagan.