File under "one of the oddest jobs ever": professional mourner. China's funeral rituals date back 2,000 years to the Han dynasty, but were banned during the Cultural Revolution as superstition. Now these funeral rituals have become an income source to a select few who stage funeral extravaganzas, marrying ancient Chinese traditions with modern entertainment.

We need a proper mourner because young people don't know how to cry anymore.

Xu Xinwei, whose family hired a professional mourner for her uncle's funeral

"Our entry into the world is splendidly dramatic, so our exit from this world also needs to be spectacular," says Hu Xinglian, who is known professionally as Dingding, or Dragonfly, Mao — a reference to the two high ponytails that bounce above her ears.

One of the top professional mourners in the southwestern city of Chongqing, Mao is famous for her kusang, which literally means crying and shouting. She became a mourner more than a decade ago after she lost her job as a department store clerk in downsizing and was casting around for new employment.

Now her fame is such that she has been ferried in a Mercedes-Benz 600 miles to Changzhi in Shanxi province to take part in funeral rites.

"A big part is saying the last goodbye to the dead person. We need to show our feelings for others to see, and to display the filial piety of the offspring," she says. "Some people can't cry. So I use my heart to sing this song to represent the loss of the younger generation."

An Ancient Ritual Amid Skyscrapers

On arrival at a funeral in Chongqing, she applies her make-up in a car; she's traveling with her troupe of six other actors and musicians. 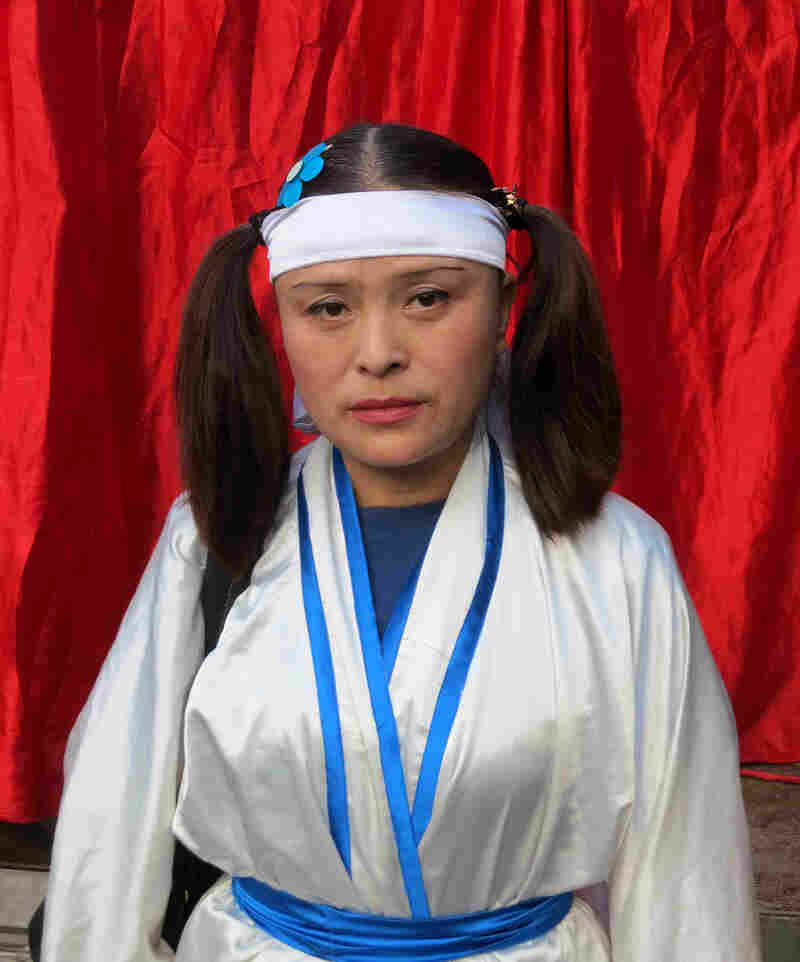 Hu Xinglian, known professionally as Dingding Mao, has been a mourner-for-hire for more than 10 years after being laid off from her position as a sales clerk in a department store. Louisa Lim/NPR hide caption 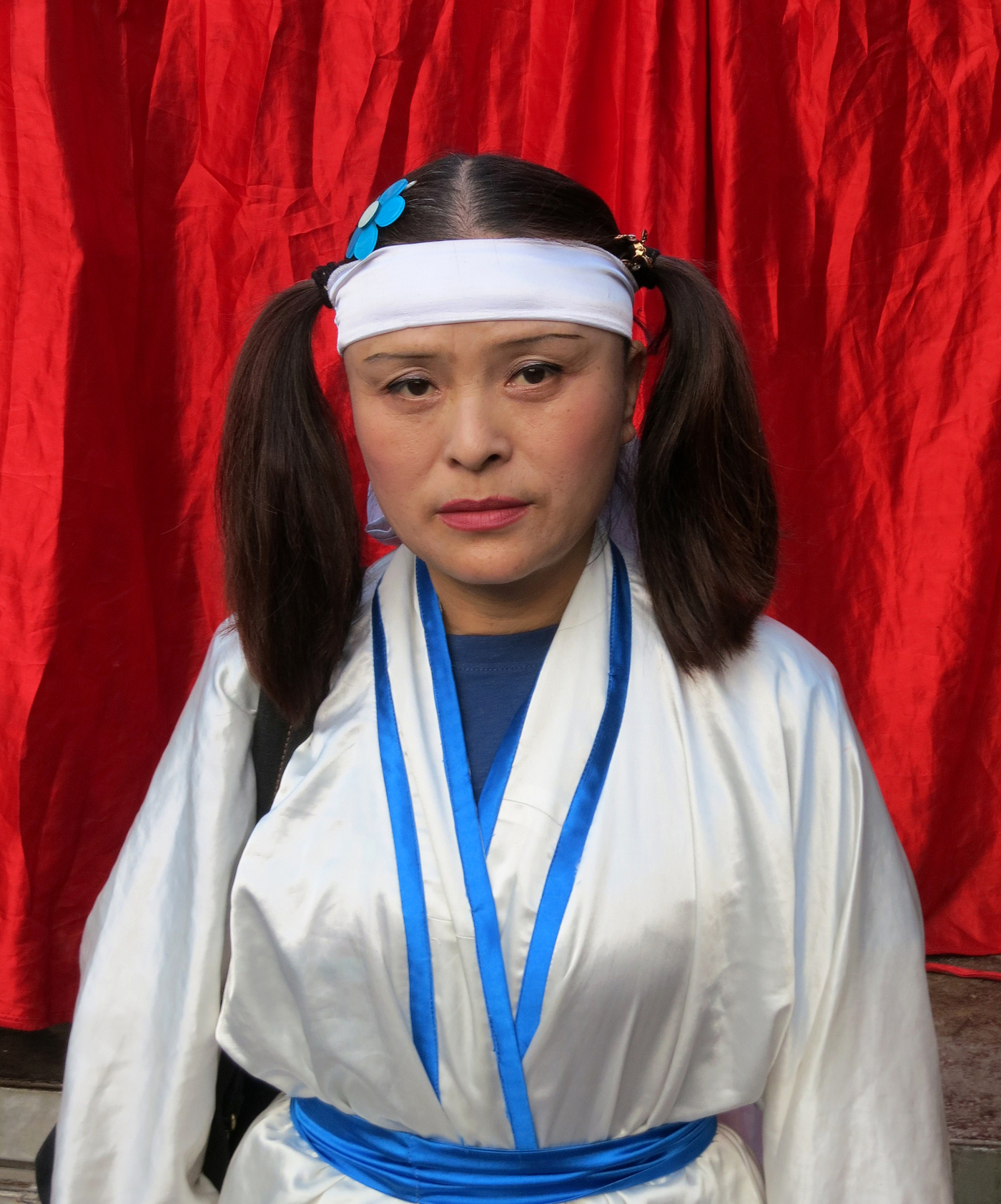 Hu Xinglian, known professionally as Dingding Mao, has been a mourner-for-hire for more than 10 years after being laid off from her position as a sales clerk in a department store.

Outside, a man dressed in red and yellow robes is chanting and burning paper money to the accompaniment of traditional instruments. He looks like a monk, albeit one in a rather showy costume, though it turns out he, too, is an actor, though not from Mao's troupe.

A huge community meal is underway, as is tradition, cooked in a tent erected outside a housing complex, dwarfed by modern, six-story apartment blocks. Down the road, skyscrapers are going up. The funeral is transplanting old traditions into the middle of a modern Chinese community.

As the mourners take their places at the 10 tables, loaded down with dishes of chili-laden food, a small child defecates on the ground just feet away.

"We need a proper mourner because young people don't know how to cry anymore," explains Xu Xinwei, niece of the deceased man, Zhang Tujin. He was 67 years old and died of heart failure. A hardscrabble farmer, Zhang was hauling sacks of potatoes right up until the day before his death.

Now, his family sits at one table, wearing white — the color of mourning in China — sackcloth on their heads.

"We paid for a whole package for the funeral service," explains his daughter, Zhang Yingshu. "Because he worked hard his entire life, we definitely need to remember him."

As the meal winds down, people start to move into a large tent that has been erected especially for the occasion. They pull up green plastic stools and wait, the mood building to the kind of expectant tension in a big-screen cinema before the start of the latest blockbuster movie.

A Final, Dramatic And Tearful Farewell

As the ceremony starts, the strains of "The Internationale" ring out, and Zhang Tujin's family walks slowly forward to stand around his coffin. Now dressed in white satin, Dingding Mao begins her eulogy, her face serious despite her incongruous bouncy ponytails. 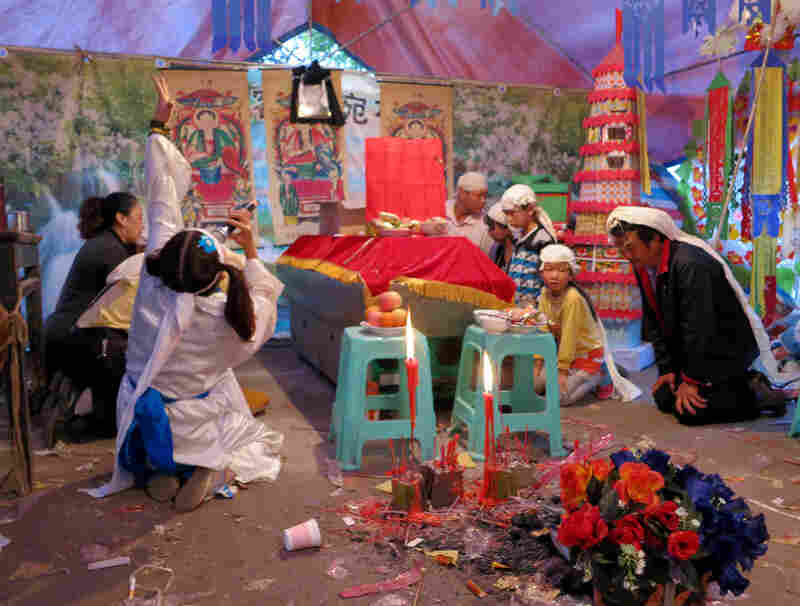 Dingding Mao and the family of the deceased kneel in front of the coffin. Louisa Lim/NPR hide caption 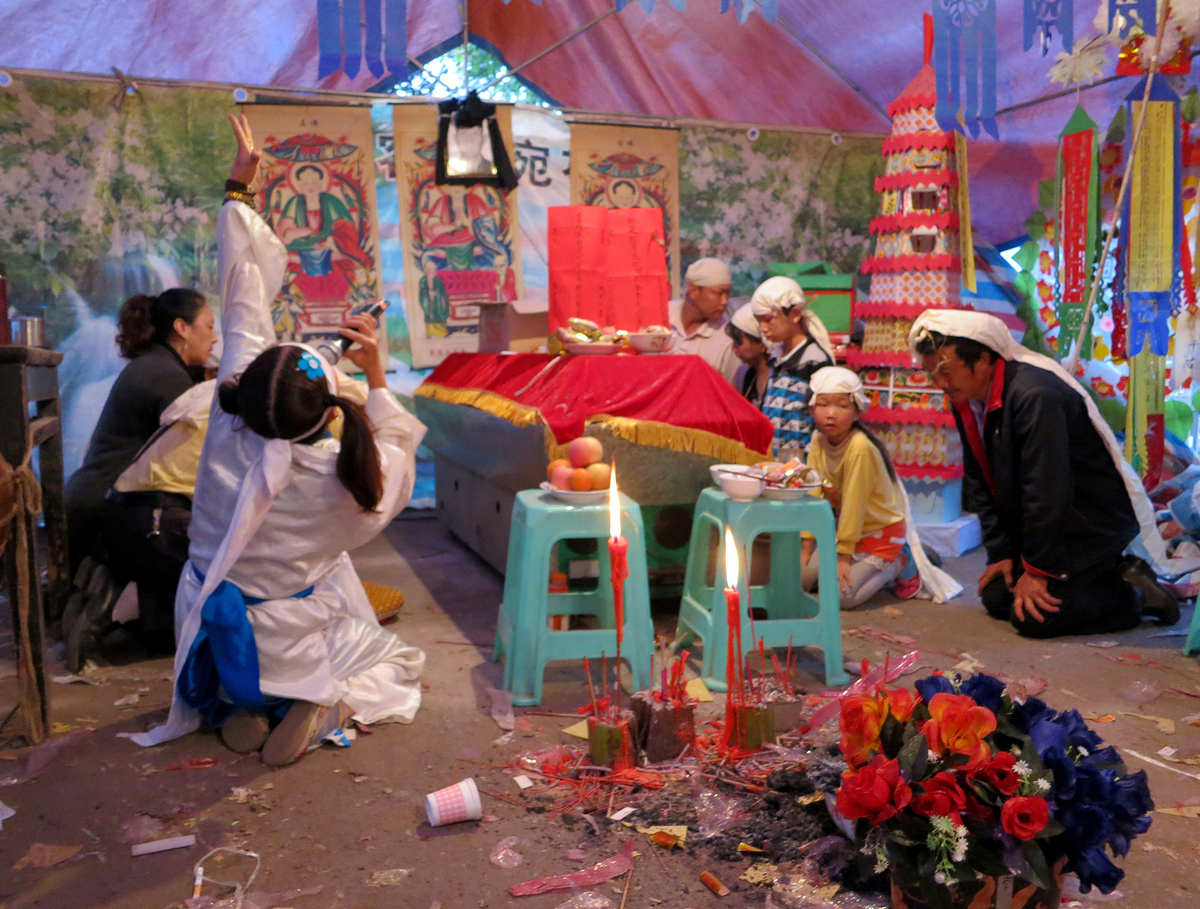 Dingding Mao and the family of the deceased kneel in front of the coffin.

To a backing track of soaring angelic voices, she speaks, her voice choked with sobs.

"He was a good man, a good husband, a good father, a good grandfather," Mao says. "He has gone now. He has left this world full of love."

As she continues, the music builds, and she falls to her hands and knees. Colored lights flash around her, as she crawls toward the coffin, wailing.

"You were like a tall tree sheltering your kids from the wind and rain," she moans. "We never thought you'd leave so soon."

People are sniveling and wiping their eyes, while the family members are weeping uncontrollably. Some of the smaller children in the audience are watching wide-eyed, their hands over their ears.

"Father!" Mao shrieks, as the music reaches a crescendo. "What will mother do? You and mother had been in love for decades. Now you have left and are not coming back."

Many of the mourners are beginning to weep now, especially an old man sitting by the speakers, overcome by emotion and the deafening volume of the wailing.

As the music reaches its crashing crescendo, a man dressed in white appears from nowhere and falls to his knees beside Dingding Mao, who is by now lying facedown on the floor. Her voice quavering, they begin to sing a duet together, as papers like those that are burned to remember the dead are tossed into the air around them like confetti. She directs the family to bow three times to the casket, which they do, tears running down their cheeks.

And then suddenly, it's over, and a young woman from the troupe is belly dancing in front of the coffin. She is wearing a pink midriff-baring top, whose ornaments jangle as she gyrates her bare stomach. The audience is stunned into silence, by this act and the follow-up, a Tibetan-themed song that Mao sings, wearing Tibetan clothing and dancing hip-hop-type moves.

With its flashing strobe lighting, karaoke eulogies, musical duets and belly dancing, this is a funeral like no other. But as we take our leave, a steady stream of people is still heading toward the tent to watch. Inside, the mood has lifted, like sunshine after rain, and people are wiping away their tears and smiling.

The family is happy; they wanted a proper send-off for their father, and this bizarre hybrid of ancient tradition fused with modern elements feels somehow fitting for modern-day China.