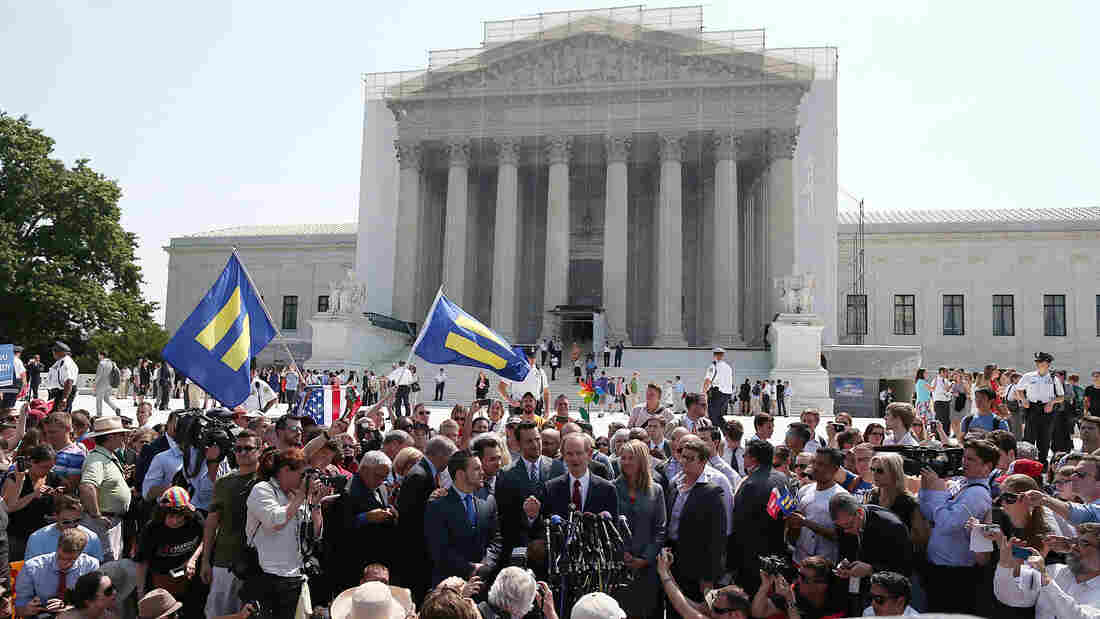 One of the attorneys in the California Proposition 8 case, David Boies (center), speaks outside the Supreme Court as he's surrounded by plaintiffs in the case, couples Paul Katami (from left) and Jeff Zarrillo, and Sandy Stier and Kris Perry. Mark Wilson/Getty Images hide caption 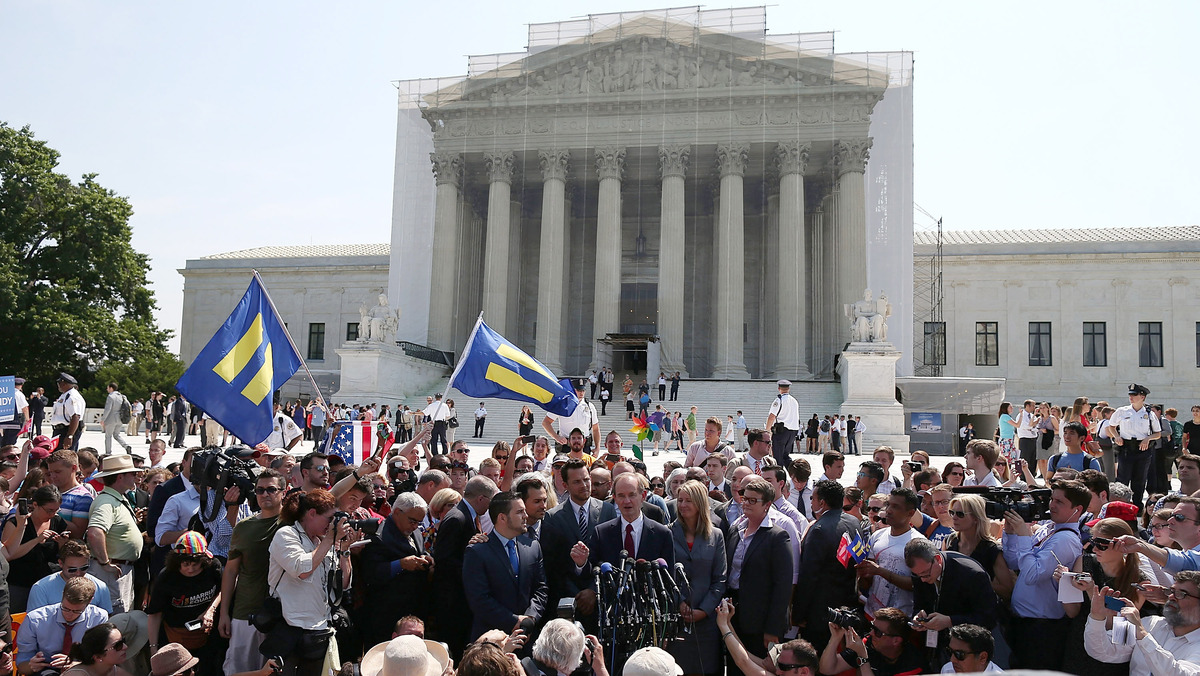 One of the attorneys in the California Proposition 8 case, David Boies (center), speaks outside the Supreme Court as he's surrounded by plaintiffs in the case, couples Paul Katami (from left) and Jeff Zarrillo, and Sandy Stier and Kris Perry.

The U.S. Supreme Court on Wednesday struck down the federal Defense of Marriage Act, known as DOMA. The court's 5-to-4 decision means that the federal government will now have to provide the same benefits to gay couples as to heterosexual couples.

In a second case, from California, the court declined to say whether state bans on gay marriage are constitutional, but in staying its hand, the court cleared the way for the most populous state to become the 13th that permits same-sex marriage.

The two decisions, with shifting 5-to-4 majorities, gave marriage-equality advocates not everything they wanted, but more than half.

DOMA, the 1996 Defense of Marriage Act, bars the federal government from recognizing or providing federal benefits for same-sex couples married in states where such unions are legal. There are more than 1,000 such federal benefits and preferences. The case before the court was illustrative.

Edith Windsor and Thea Spyer, whose 2007 marriage was recognized by the state of New York, were together for 44 years. But when Spyer died, Windsor was required to pay $363,000 in federal estate taxes that she would not have owed if her spouse had been of the opposite sex.

"If Thea was Theo, I would not have had to pay that," Windsor told NPR in March. "Now, that's just a terrible injustice. ... I think it's a mistake that has to get corrected."

Writing for the five-justice court majority, Justice Anthony Kennedy said that DOMA's principal effect is to "identify a subset of state-sanctioned marriages and make them unequal." He listed just a few of the ways DOMA "touches many aspects of married and family life from the mundane to the profound," even barring same-sex couples from being buried together in veterans cemeteries.

"DOMA instructs all federal officials, and indeed all persons with whom same-sex couples interact, including their own children, that their marriage is less worthy than the marriage of others," Kennedy wrote. "No legitimate purpose overcomes the purpose and effect to disparage and to injure those whom the state ... sought to protect in personhood and in dignity."

To that, Justice Antonin Scalia responded in dissent that "it takes real cheek for the majority, as it is going out the door, to leave the public with that comforting assurance, when what has preceded it is a lengthy lecture on how superior the majority's moral judgment in favor of same-sex marriage is to Congress' hateful moral judgment against it.

"Few public controversies will ever demonstrate so vividly the beauty of what our framers gave us, a gift the court pawns today to buy its stolen moment in the spotlight: a system of government that permits us to rule ourselves," Scalia said.

He went on to say that the court majority, in striking down DOMA, had "cheated both sides" of a public debate through the elected branches of government. In doing so, he said the majority was "robbing the winner of an honest victory and the losers of the peace that comes from a fair defeat."

After disposing of the DOMA case, the court moved on to the California case — a direct constitutional challenge to the state's ban on gay marriage. This time, a different five-justice court majority ducked the broader question, declining to tell the state whether there is or is not a constitutional right for same-sex couples to marry. If there were such a constitutional right, laws banning same-sex marriage in 38 states would be invalidated.

California's case began in 2008, when voters narrowly approved a ban on gay marriage, known as Proposition 8. When same-sex-marriage advocates challenged the ban in court, state officials, both Republican and Democrat, refused to defend it, and proponents of the ban were allowed to replace the state as defenders of Proposition 8 in the court case.

But on Wednesday, Chief Justice John Roberts, writing for himself and four other justices, said that those Proposition 8 proponents had no legal standing to defend the law in court. The Constitution, he said, requires the courts to decide only those cases in which the litigants can show an actual concrete injury. And in this case, the proponents of Proposition 8 suffered no such injury.

"Only the state could have appealed to the Supreme Court seeking to re-instate the ban," Roberts said. "We have never before allowed a private party to defend the constitutionality of a state statute when the state officials have chosen not to. We decline to do so for the first time here."

Former Clinton Solicitor General Walter Dellinger said the case "was over" back in 2010, when then-California Gov. Arnold Schwarzenegger, a Republican, and then-Attorney General Jerry Brown, a Democrat, decided not to appeal a lower court ruling that declared Proposition 8 unconstitutional.

Those advocating the ban "didn't have a stake in the outcome different from any other citizen and therefore didn't present a real case or argument to the Supreme Court," said Dellinger, who wrote a friend-of-the-court brief making the argument Roberts ended up adopting.

Despite the court's hands-off decision in the Proposition 8 case, the practical effect of the ruling is to clear the way for same-sex marriages to resume in California. Within hours of the high court ruling, Jerry Brown, now governor of California, told county officials they must resume issuing licenses to same-sex couples as soon as legal technicalities are complied with, probably in July.

Proposition 8 proponents said on Tuesday they are not sure whether they will fight the governor's action.

"The desires of adults are not more important than the needs of children," said Tim Walberg, of Michigan.

"What we see is a Supreme Court out of control," said Rep. Randy Weber, of Texas. "What we have today is a holy quintet who goes against the laws of nature and nature's God," said Rep. Louis Gohmert, of Texas.

"A narrow, radical majority of the court has substituted their personal preferences on marriage for the will of the voters and their elected representatives, and those who are hurt most, in my opinion are the children of America," said Rep. Tim Huelskamp, of Kansas. And Michele Bachmann of Minnesota called the Supreme Court majority "an effective oligarchy" that has transformed the country into "a nation that our founders would no longer recognize."

But gay-rights advocates were both relieved and ebullient.

The Supreme Court's decisions "are the Cinderella moment for the marriage-equality movement," said Yale Law professor Bill Eskridge. "Finally, Cinderella has met her charming princess, and though their marriage has not been consummated, nor a date even been set, this is the transformative moment legally and constitutionally from a status quo where marriage equality was not likely to a constitutional status quo where marriage equality is virtually inevitable in the next five years."

Mary Bonauto of the Gay and Lesbian Advocates and Defenders had a more personal take, reflecting on her experiences throughout her career.

"I've been sitting here all morning thinking about the many people I've represented over the years and how much this matters to them to have the Supreme Court confirm our key constitutional principles," Bonauto said. "You know that we come to the government as equals, and the Supreme Court slammed that out of the park today."

The court split unusually in the California case, with conservative Chief Justice Roberts joined by liberals Ruth Bader Ginsburg, Elena Kagan and Stephen Breyer. But it was the conservative Justice Scalia, the lead dissenter in the DOMA case, who provide the fifth and deciding vote to punt and leave the question of gay marriage to state officials in California.

Justice Kennedy, the author of the DOMA ruling, wrote the dissent in the California case for himself and conservative justices Clarence Thomas and Samuel Alito, plus liberal justice Sonia Sotomayor. They would have allowed the Proposition 8 proponents to defend their initiative in court, and that in turn would very likely have led to a decision on the constitutionality of the initiative. Just what that outcome would have been, however, remains a mystery.

As for the future, there are already cases in the pipeline that challenge state bans on same-sex marriage in other states. The most likely to reach the Supreme Court first is from Nevada, but that won't be for a year or two, perhaps more.

When the issue finally does come back to the high court, there is little doubt that the language in the DOMA case about equality and discrimination will help frame the issue, observes Richard Garnett of Notre Dame Law School. "A lot of that language is going to be really helpful to people who are challenging traditional marriage laws," he says.

Garnett's point is reinforced by David Codell, legal director of the Williams Institute, a think tank about gay issues at UCLA.

"It's gratifying that the court recognized the equal protection harm [and] the harm to the dignity of gay and lesbian people that DOMA inflicted," Codell said.

George Mason University professor Helen Alvare, an opponent of same-sex marriage, agreed that Wednesday's rulings were a major setback. But, she said, given her concern about the effect of same-sex marriage on children, she and other opponents of same-sex marriage will continue their fight to preserve marriage as only between a man and a woman. You don't drop that perspective "because the court puts you really behind the eight ball."

"We are in something of a holding pattern," says Michael McConnell, a former federal appeals court judge who now directs the Stanford Constitutional Law Center. "In the short term what this does is leave the question of same-sex marriage to the states. I don't expect that necessarily to be the long-term solution."