Accessibility links
Movie Review - 'I'm So Excited' - From Almodovar, A Brightly Colored Invite To The Mile High Club Fans of Almodovar's lighter classics, like Tie Me Up! Tie Me Down! may like the vibrant energy of I'm So Excited! — but critic Ella Taylor says some will miss the soul of his more complicated love letters to Hollywood's maternal melodramas.

Almodovar, Extending An Invite To The Mile High Club

Almodovar, Extending An Invite To The Mile High Club 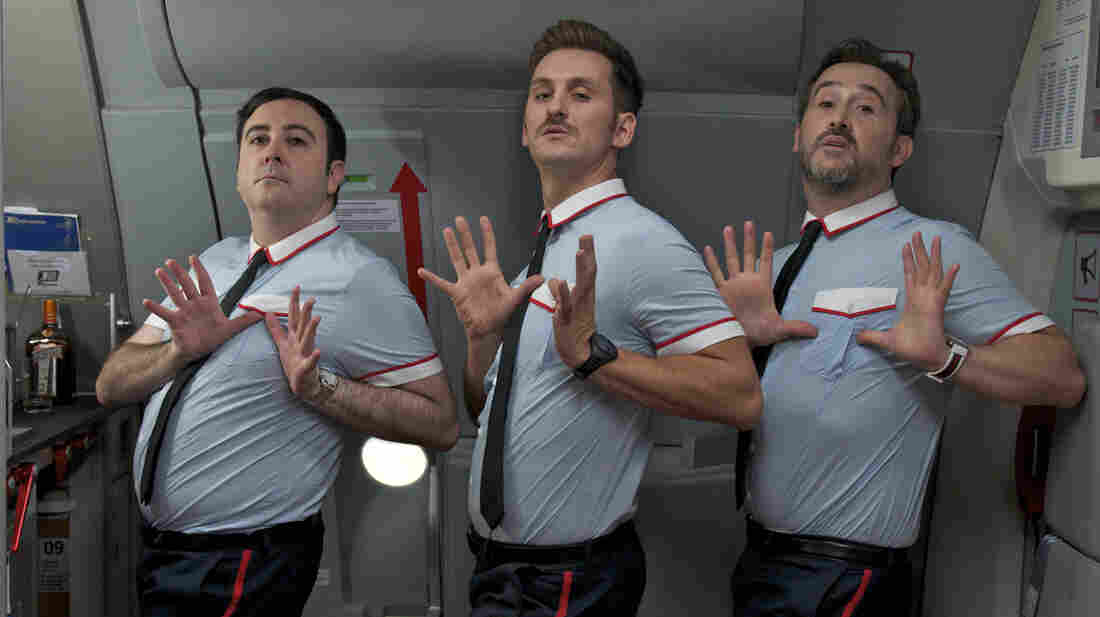 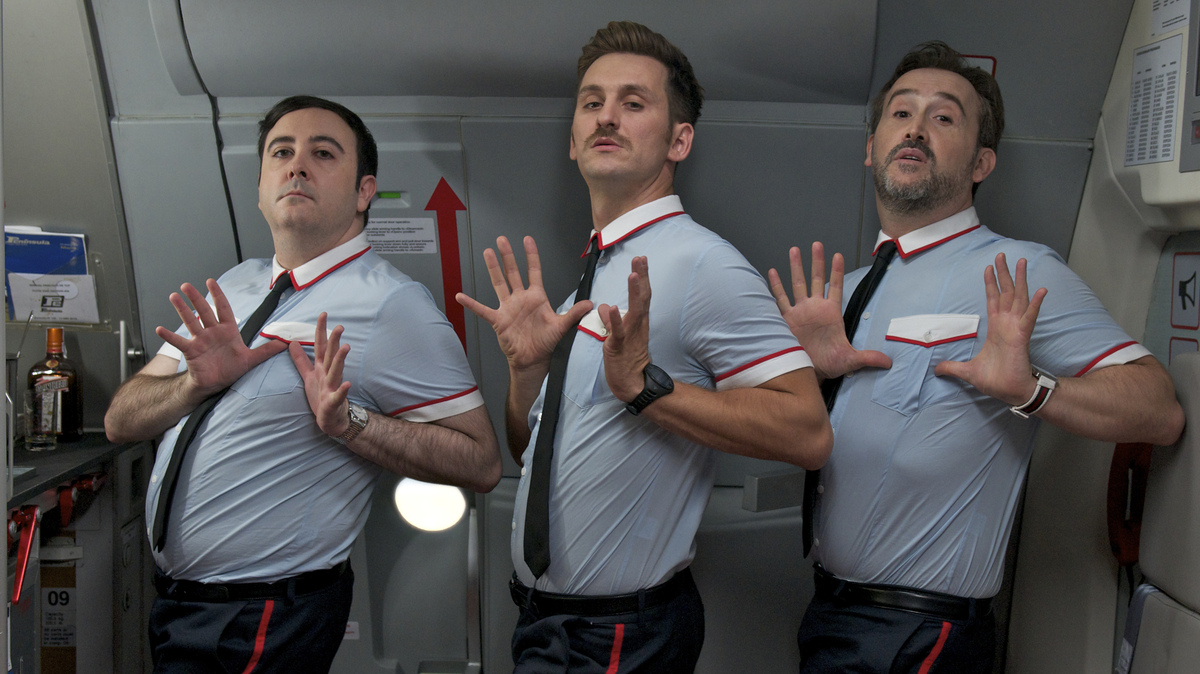 'Did Anything Else Fall?'

I'm So Excited! a less-than-exciting new romp from the great Pedro Almodovar, dusts off one of the hoariest plot tricks in the farceur's playbook: Trap a bunch of upstanding citizens in a confined space with no exit, and watch their ids — along with their secrets and lies — come out to play.

The prison in this instance is a Mexico-bound plane from Madrid, marooned in a holding pattern with no promise of a soft landing. If there's a metaphor here for Spain's moribund economy, Almodovar isn't saying so. But death hovers over passengers in every cabin class, and if you're up to speed on Almodovar, it will come as no surprise to learn that the prospect of mortality perks up the libido no end.

Not least among the newly randy is a psychic (Lola Duenas) with a radar for the Grim Reaper's upcoming targets — though even in such a target-rich environment, she's suddenly more interested in casting off her virginity. The other passengers include a swindler, a womanizer, a hit man and a queen of the gossip tabloids, who's got the goods on more than one of her fellow business-class travelers. (To say nothing of what some of them have on her.)

One thing leads to another, and pretty soon there's dirt linking one passenger to the next, and so on. If nothing else, the onboard claustrophobia and free-floating anxiety make it clear what moves us to confide to strangers on a plane the sort of intimate secrets we'd never share with the guy at the next coffee-shop table.

Almodovar is in party mode here, and if you liked his 1990 comedy Tie Me Up! Tie Me Down! you'll probably love I'm So Excited! for its candied pastels and its impishly clever design, which transforms the plane into a theater and its galley into a staging area for those three theatrical stewards. 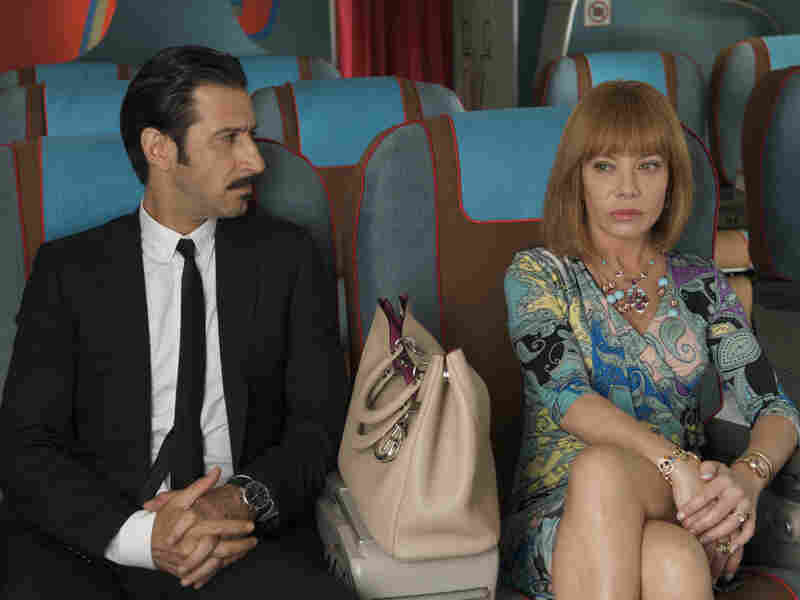 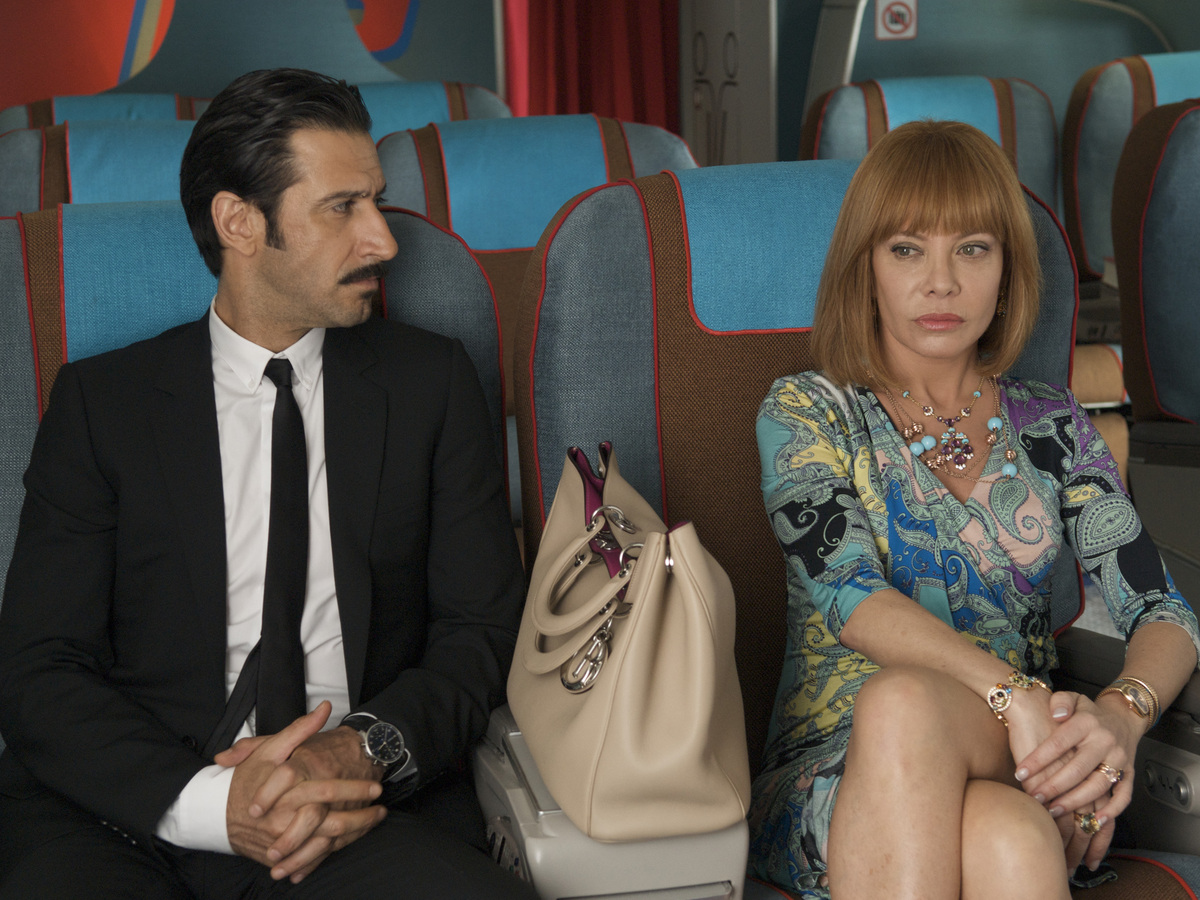 A tabloid queen (Cecilia Roth) learns from a hit man (Jose Maria Yazpik) that two can play at the assassination game.

The cast is peppered enjoyably with stars from earlier Almodovar hits — Cecilia Roth from All About My Mother; Javier Camara, who played the nurse in Talk To Her; and others — plus a sprinkling of new talent (Spanish subpop star Carlos Areces is enormous fun as one of the dancing attendants). And Almodovar has tossed in two major movie stars as an opening-moments amuse-bouche.

But I'm So Excited! prances gaily from one fallen soul to the next for what seems an unconscionably long time before it's capped by a climactically carnal set piece so stagey it's stripped of all eros. For all its jazzy formalism and bedroom-eyes bravado, though, the movie feels uninvolving, a tribute to Hollywood screwball that's ultimately more wearyingly prankish than transgressive.

In Almodovar's best movies, it's not how "decadent" his characters are, or whether they've done time, or how they've altered their original bodies, that counts toward who they are. It's whether they practice the kindness of strangers. Compared with that, I'm So Excited! isn't much more than disposable burlesque.