Accessibility links
Why Paula Deen Can't Be A 'Food Network Star' The reasons Paula Deen couldn't stay on at Food Network are right there in a show it produces. 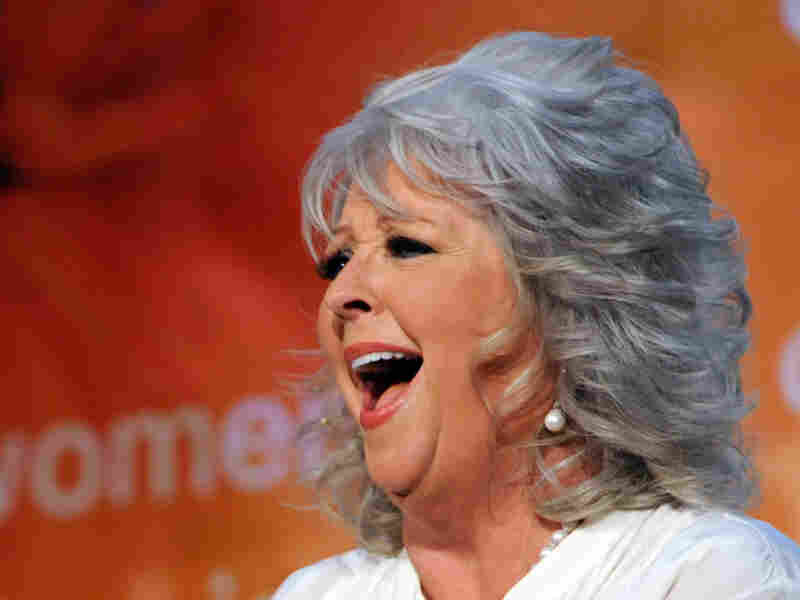 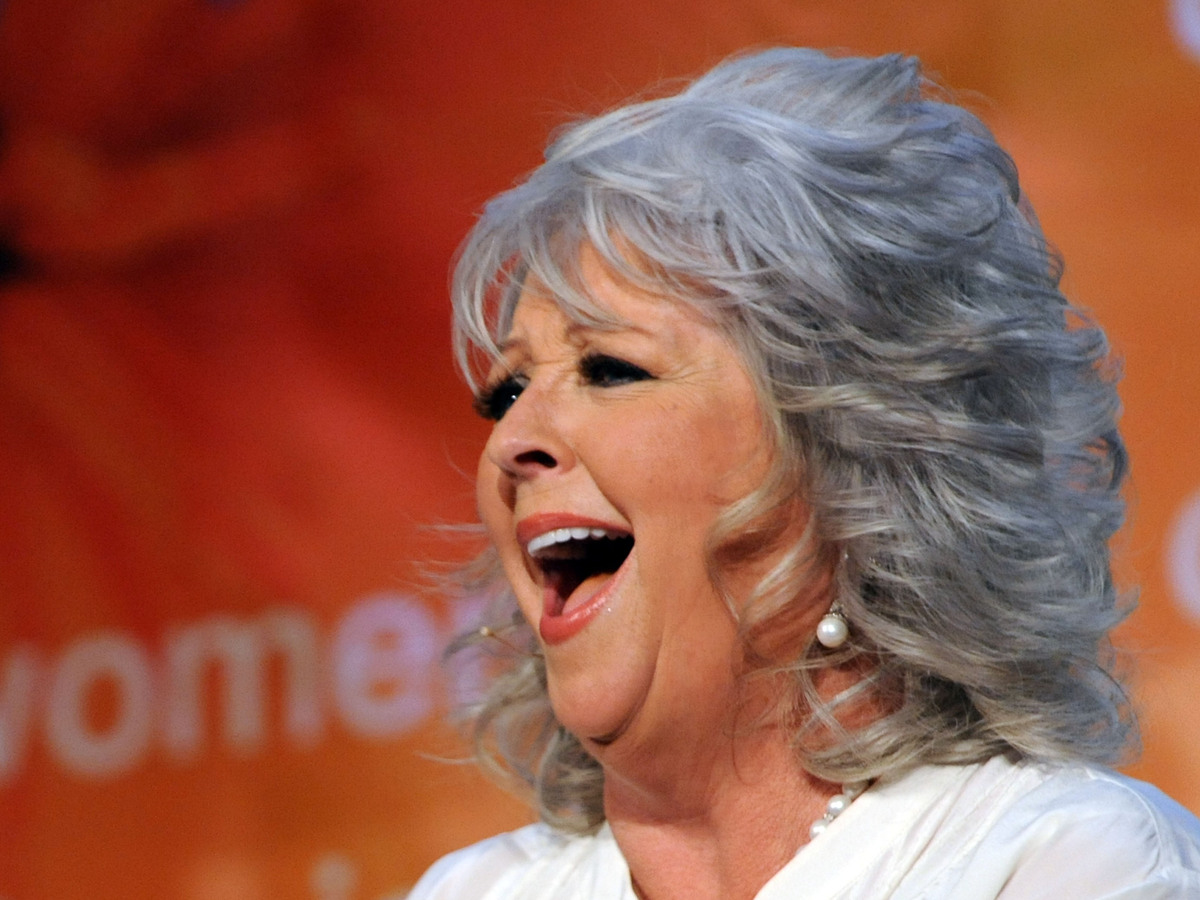 The Cost Of Being A Nation Of 'Soul Food Junkies'

It's not the least bit surprising that Paula Deen lost her gig on The Food Network — and you don't have to believe she's a terrible person to know it. All you have to do is watch Food Network Star, the competition show that seeks a new network personality and sometimes finds one.

Oh, and it's also where they got a guy named Guy Fieri. You might have seen him in shorts, running around and yelling.

In other words, the show isn't a stunt like The Apprentice where the prize is a fake job with Donald Trump. The prize is an actual job; you have a decent shot at walking away from it as a person with a show on the Food Network, and in some cases as a big star who makes a lot of money and is successfully transformed into a brand. And if you've ever watched Food Network Star, the reasons they parted company with Paula Deen are entirely obvious.

Contestants are told from the beginning that they have to sell a concept, and it has to be pretty specific: sandwiches, cheap dinners ... or, you know, yelling in shorts. It's nowhere near enough to be a good cook, or a great cook, or a great teacher. The specific objective, as it's explained over and over again, is to create a sense of constructed familiarity that will get viewers to like you, to invite you in, to listen to you, and to care what you say. You have to cook good food, but it's enormously more important to look good on camera and to be engaging.

That applies to the existing chefs as well. They've all got a thing they at least allegedly are there to do and be: Bobby Flay is noisy but high-energy, Ina Garten is warm and nurturing, Rachael Ray splits the difference between cooking well and cooking fast, and Sandra Lee makes weird things out of canned things.

Paula Deen was Your Southern Granny, especially for people who didn't have a southern granny. She pushed mind-bendingly fattening foods for the vast majority of her career — that's where I saw bread pudding made from Krispy Kreme donuts — but at least she was nice and funny and had a lot of great stories about loving her family.

On Food Network Star, they make you talk about your family a lot. The attitude is that if you can't tell a personal story about a recipe, there's essentially no reason to make it on television, which is a pretty high bar as far as coming up with reasons why you totally care deeply about those turkey burgers.

Paula Deen built her entire Food Network brand on people's positive reactions to stereotypes about the south: the warm embrace of a southern woman, making nutritionally reckless food while telling you great stories. (PBS's Independent Lens series ran a terrific documentary called Soul Food Junkies that's wonderfully thoughtful about the social aspects and health ramifications of soul food, which of course overlaps with but is not synonymous with southern food as Paula Deen understands it — seek out the film if you get the chance.)

Her first big bump came when people found out she hadn't disclosed that she had Type 2 diabetes until several years after her diagnosis when she was working with the drug company Novo Nordisk. Her failure to disclose isn't the most compelling reason in the world to be resentful of her, since there's plenty of evidence for the connection between eating and diabetes without Paula Deen personally having it — in fact, if she didn't personally have it, that would be a pretty terrible anecdotal argument for the proposition that her style of cooking can't contribute to it. But it dinged her public image, for sure.

And then last week, Deen's deposition came to light in a case where she was accused of creating a discriminatory work environment, and while the biggest publicity boom surrounded her confession that she'd employed racial slurs in the past, she probably got herself in almost as much hot water for saying some other curious things about her opinions in the present, including the idea that "most jokes are about Jewish people, rednecks, black folks."

You could sort of hear the brows furrow: They are? Most jokes are?

But if you've watched more than five minutes of Food Network Star, you know that they only care what's in your heart to the extent it happens to be congruent with what people think is in your heart. You can be the nicest person on the planet, and if it's not coming across, you're out. It's not about who you are, but about who you seem to be, because cooking is personal and touches people's families in all the most constant and important ways, so, you know. You'd better be able to make the sale.

None of this is to defend Deen as someone who would, as she claims, be found to have a good heart if we could only peer into it. It's only to say they don't, in fact, peer into it. Food Network is a sandcastle of manufactured intimacy, and your ability to convincingly maintain that intimacy is your most important job skill.

These revelations didn't only hurt Deen with a certain number of people who don't consider themselves part of a southern tradition, who may have recoiled from things like her recitation of her dreamed wedding that sounded very much like a plantation fantasy. They also hurt her with a segment of southerners who know that every time this happens, every time a southern lady acts like everybody knows most jokes are about black people and Jewish people and rednecks, they have to listen to an avalanche of obnoxious Yankee generalizing about how no one should expect anything else from a southern lady of a certain age, which is, of course, false.

As James Poniewozik wrote at Time, "Deen made a pile of money off a certain idea of old-school southern culture. In return, she had an obligation to that culture — an obligation not to embody its worst, most shameful history and attitudes. Instead, in one swoop, fairly or not, she single-handedly affirmed people's worst suspicions of people who talk and eat like her."

Some of the commentary on Deen and her fans has been nasty, classist and unfair — there are plenty of high- and low-end restaurants outside the south where the desserts are as decadent as hers, and where the dinners are as caloric, and where plenty of the food would not be recommended by any doctor. The sneering is unfortunate, but more importantly for television, the sneering simply is.

One of the things she told Lauer was that it was a terrible feeling to think that supposedly "people I have never heard of are experts on who I am." But that's exactly what she made the money for. People she never heard of felt like they could tell you what she was like, what her personality was like, what it would be like to eat dinner with her. That's why they liked her. They were experts in who she was, and that was okay as long as they came to agreeable conclusions to her. Now, those conclusions aren't so agreeable, but they're no less based on reality.

Cooking TV is a personality-hawking business. They tell you that when you're angling for the job.