Accessibility links
Put Down Oil Drill, Pick Up The Test Tube: Making Fuel From Yeast Synthetic biologist Jay Keasling has already taught yeast to make the leading anti-malarial drug. His next project takes the technology a step further, using yeast to turn plant waste into diesel — and maybe gasoline and jet fuel, too. 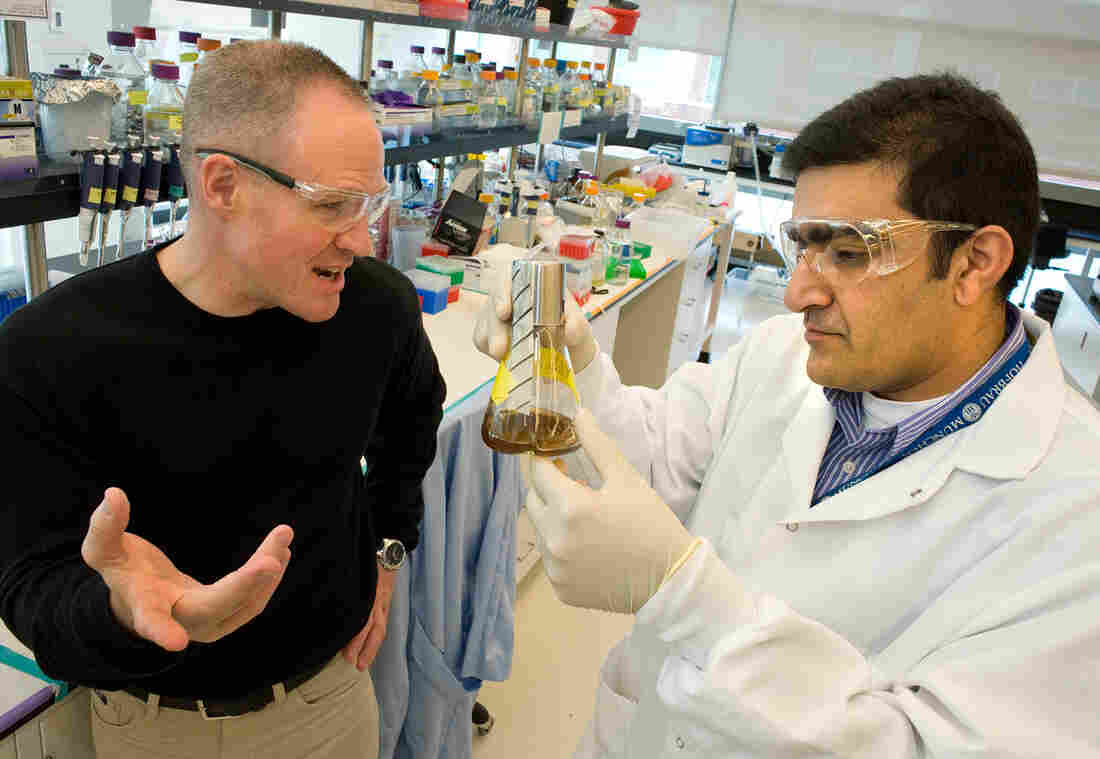 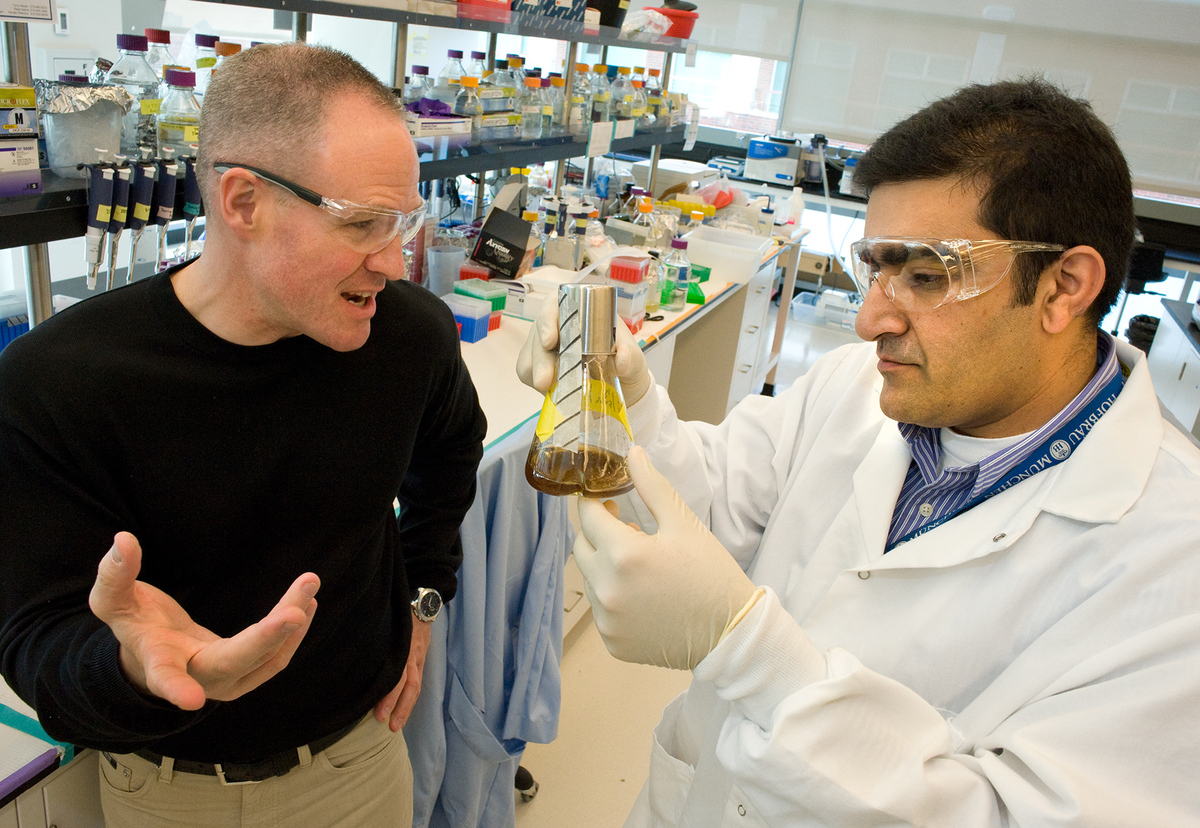 Jay Keasling (left), speaking with Rajit Sapar at the Joint BioEnergy Institute, is pioneering a technique to develop diesel fuel from yeast.

What if we could get our gasoline, diesel fuel and jet fuel from yeast instead of from oil wells? That's not as crazy as it sounds. In fact, it's already happening on a small scale. And there's a vigorous research effort to ramp this up on a massive scale.

One of the more innovative approaches uses a new technology called "synthetic biology." Jay Keasling is one of the leaders in this hot field.

With his supershort crew cut and friendly demeanor, Keasling would fit in nicely where he grew up — on a corn farm in Nebraska that's been in his family for generations. But these days you'll find him in a glistening building in Emeryville, Calif., home to several of his many endeavors.

Among the many hats Keasling wears is that of associate laboratory director for biosciences at the Lawrence Berkeley National Laboratory. He's also CEO of the Joint BioEnergy Institute, director of the Synthetic Biology Research Center, and a professor at the University of California, Berkeley.

Not to mention founder of three biotechnology companies — Amyris, LS9 and Lygos.

"My research [focus], since I've been at Berkeley for the past 20 years, is, 'How do you engineer chemistry within cells?' " Keasling says. "I really believe you can use microbes as little chemical factories to produce almost anything we want."

Imagine if we replaced a third of our transportation fuels and made them renewable. That would be a huge benefit.

This is the basis of synthetic biology — genetic engineering taken to a whole new level. Instead of tweaking one or two genes, Keasling and his colleagues change a bunch of genes, so microbes such as yeast can be transformed into chemical factories.

His most successful project to date doesn't have to do with energy. Keasling and his team inserted or tweaked a dozen genes in yeast cells and turned them into tiny factories that churn out a partially synthetic version of artemisinin, a key drug in the leading treatment of malaria. (The usual source of artemisinin is a tree known as sweet wormwood, and there are not enough to meet the global demand.)

Keasling's group licensed the synthetic version to a drug company called Sanofi, which has since produced 35 tons of artemisinin, enough for 70 million people. And this spring, the World Health Organization approved the new version as a malaria treatment.

Surprisingly, it's not such a leap from making the artemisinin to churning out fuels. The drug and diesel are both basically hydrocarbons — hydrogen and carbon atoms cobbled together. So Keasling remembers thinking, "if we can just make a few more tweaks to that yeast that produces artemisinin, we can get it to spit out diesel fuels, or maybe even jet fuels, or gasoline."

Sure enough, they made those tweaks.

And now Amyris, one of the companies Keasling founded, "has a factory in Brazil that's using the engineered yeast, taking in sugar and spitting out a product that's a diesel fuel," Keasling says. Already, that diesel is in buses in Rio and Sao Paulo.

There is, of course, a catch: "This diesel is still more expensive than petroleum-based diesel by quite a long shot."

The yeast produces a hydrocarbon called farnesene, which can not only be converted to diesel but also turned into other much more lucrative chemicals. That's how Amyris can afford to make this pricey fuel.

The challenge now is to drive down the price. One way Keasling can do that is to make yeast much more efficient at churning out fuel molecules. Another way to make the end product cheaper is to start with a plentiful, less expensive starting material — raw plant matter instead of purified sugar.

"It turns out that all plants are roughly two-thirds sugar," Keasling explains. It's tied up in a molecule called cellulose."

Lots of biotechnology companies have been working on the problem of breaking down cellulose with some modest success. Synthetic biology could possibly crack it wide open.

Under ideal circumstances, there's enough raw plant material — especially agricultural waste — to supply about a third of the liquid fuel we use. (Though there are potential pitfalls when you grow crops for fuel instead of food.)

These cleaner fuels would help reduce the buildup of carbon dioxide in the air, at least a bit. But ultimately, the challenge of reducing global emissions has to be met on many fronts, researchers say.

"In terms of technology the big lever is to improve the efficiency of the vehicles," says Doug Chapin, director of MPR Associates, an engineering firm in Alexandria, Va. Chapin was chairman of a recent report by the National Research Council, which looked at what it would take to reduce vehicle emissions by 80 percent by midcentury.

"The other big lever is [that] none of this happens unless the nation has the will to decide that this is the thing they want to achieve, almost more importantly than anything else," Chapin says.

Americans and others would need to accept fuels that cost more at the pump in exchange for the much less tangible benefit of a healthier planet. And governments would have to institute that not very popular idea.

Of course, making biofuels cheaper would make that sort of transformation an easier proposition, and that's what drives Keasling.

"There are some huge challenges, but there are huge opportunities," he says. "Imagine if we replaced a third of our transportation fuels and made them renewable. And maybe through other means we could decrease the use of petroleum-based fuels so we were putting much less carbon into the atmosphere. That would be a huge benefit."

Of course, it's intellectually stimulating to figure out how to engineer microbes to do your bidding. But it's also gratifying to feel like you're solving a problem that will help humanity. And Keasling says there's a personal bonus in this for him, too. His father in Nebraska now grows corn for ethanol, which is a very inefficient way to make fuel from crops. Maybe someday he'll be able to switch to a better crop for biofuel.