Accessibility links
Puerto Rico Rolling Out The Welcome Mat For Millionaires The recession hit Puerto Rico's already struggling economy hard. So the island, a U.S. territory that can make its own tax laws, is pitching an attractive offer to the wealthy: Move to this warm, tropical isle and live virtually tax-free. 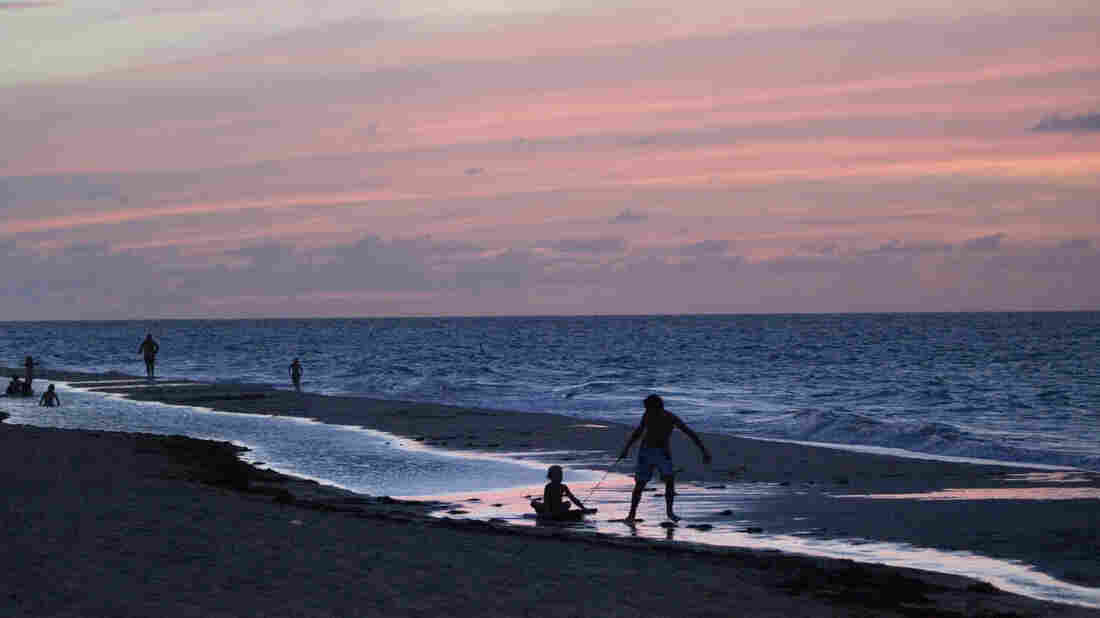 A few weeks ago, Alberto Baco Bague arrived in New York for a roadshow of sorts. In just 48 hours, Baco, Puerto Rico's secretary of economic development and commerce, met with more than 30 hedge fund managers, investors and others who could be classified as very well-off.

His mission might seem quixotic at best: trying to convince these well-heeled New Yorkers to uproot themselves from Manhattan and relocate to Puerto Rico. But he says they are starting to come.

For Baco and the Puerto Rican government, the benefits of injecting more rich people into the island are clear. "We are a poor island, and this is our way of developing [and] developing employment in Puerto Rico. We are very serious about that," he says.

Baco has an enticing carrot for the investors. Under laws enacted in 2012, when someone moves to the island, all of that person's investment income, like capital gains, dividends and the like — is completely tax-free. Plus, service income — say, a hedge fund's management fees, is taxed at just 4 percent. And, as it is for all Puerto Rico residents, there's no federal income tax.

The catch is that you can't just set up a post office box and call yourself a resident. You have to move for real. Like Damon Vickers has.

Vickers moved his hedge fund and his family here from Seattle earlier this year. He had been eyeing the U.S. Virgin Islands for a move, but then caught wind of Puerto Rico's new tax benefits. For him, it's about simple math.

"I like making money. And we want to go to a place where our money is treated the best, so we might benefit ourselves, and we might also benefit our investors," he says.

His friends in the investing world are watching closely to see how he fares. Many are unaware the island even has a financial district, much less modern highways and shopping malls. Once they learn more, many worry about the crime, including a murder rate six times the U.S. average.

And, given its gritty reputation, word hasn't gotten out that the wealthy can live well in Puerto Rico.

Who Hides Money Outside The Country?

Paco Diaz, with Trillion Realty Group, the local affiliate of Christie's, is among those trying to convince them. Picking them up in his late-model BMW SUV, he takes investors around tony neighborhoods like Condado on the San Juan beachfront, pointing out homes selling for millions.

He shows off resort hotels, new condo buildings and high-end stores along a segment he says many call "the Puerto Rican version of Fifth Avenue." New York's storied shopping strip doesn't have anything to worry about, but one block here does feature Louis Vuitton and Cartier.

To take advantage of the tax breaks, the rules say you must live in Puerto Rico at least 183 days a year and prove that you're really part of the community. Your spouse must live with you, and your kids must go to local schools. Some of the best, like the private Saint John's School, are just feet from the ocean, which Diaz uses as a selling point. He points out students attending a surfing school behind him. "They just go across the street with their surfing boards to catch some waves," he says.

If the city life is not to the investors' liking, Diaz takes them to the suburb of Dorado. It's a gated community on steroids. Past its guards, you'll find lush palm trees, golf courses, private beach clubs and a water park. A few nights at the Ritz Carlton resort here costs about what the average Puerto Rican makes in a year. Singer Ricky Martin lives around the corner.

Diaz's colleague Coco Millares says the tax incentives are already boosting her business. "We have had, since they passed the law, much more interest in Dorado than we had before," she says.

Hoping To Boost A Weak Economy

But back in San Juan, few residents had even heard of these tax breaks. When told the details, their reactions were mixed. One thought it could bring some much-needed money to the island. But others, like restaurant worker Estefania Colon, were resentful that locals pay taxes while the newcomers are exempt from many of them.

"They're already rich, and they're making more money from us?" she says.

Tax incentives are nothing new to Puerto Rico. For decades, tax breaks brought manufacturing and pharmaceutical firms to the island. But many incentives have been phased out, and some officials believe that's one reason the island's recession has been so deep. Unemployment is nearly 14 percent, and the average income is about half that of Mississippi.

The hope is that a few super-rich people will help turn some of that around and beef up the service and financial sectors, while also buying real estate, eating at restaurants, hiring locals and, eventually, maybe even invest their own money in big projects on the island.

The zero percent tax on investment income, and the 4 percent corporate tax, went into effect at the start of 2012. The goal is for 500 wealthy investors to come in the next four years. So far, 77 have applied.

The investment tax breaks are guaranteed until 2036. Only congressional action — or granting Puerto Rico statehood — would put a stop to them. But while some say this is just Puerto Rico becoming the latest tax haven, there has been little serious opposition.

Mauro Guillen, a professor of international management at the University of Pennsylvania's Wharton School, says Puerto Rico officials are being a bit optimistic about the direct effects.

"It is not going to create a major migration to Puerto Rico," Guillen says. The biggest boon could be indirect, he explains. Even if just a few people move, it could change the conversation about the island.

"Puerto Rico will be making the headlines. It will be perceived as a location where you should do business in," Guillen says.

Lawyer Fernando Goyco, who advises many of the investors, says in his practice, it's millionaires, not billionaires, who are showing the most interest in moving for the tax deal. That could be a good thing for Puerto Rico, he says — too many super-rich moving here to avoid taxes could draw congressional scrutiny.

But as the word spreads, he says, millionaires are calling his office.