Accessibility links
Tips For Surviving A Mega-Disaster NASA has a plan to fend off giant asteroids, but what about tsunamis, earthquakes, storms that last 45 days and mammoth floods? Earth scientists say science-based strategies can help communities prepare for the worst of the worst. 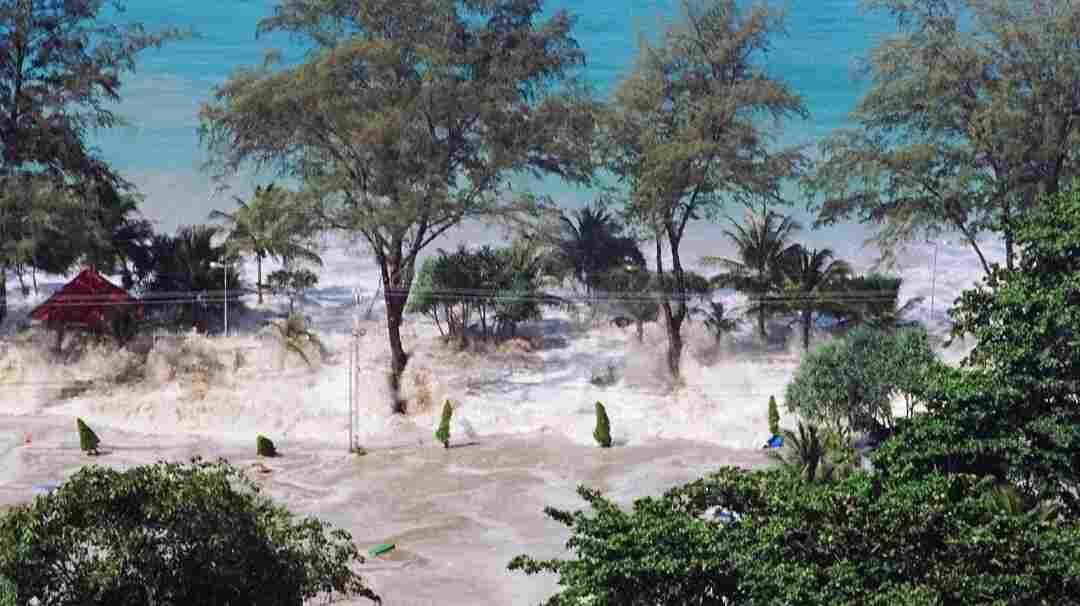 Patong beach in Phuket, Thailand, was destroyed by the tsunami on Dec. 25, 2004. More than 230,000 people died. Gamma-Rapho via Getty Images hide caption 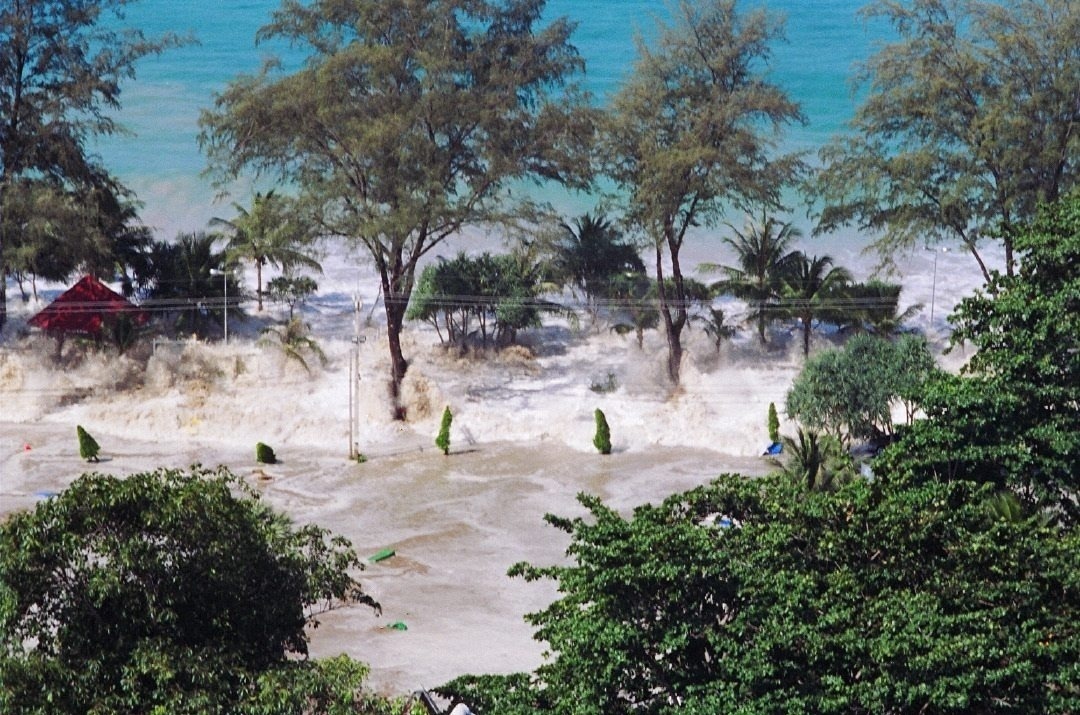 The U.S. is ready for tornadoes, but not tsunamis.

That's the conclusion of a panel of scientists who spoke this week on "mega-disasters" at the American Geophysical Union's science policy meeting in Washington, D.C.

The nation has done a good job preparing for natural disasters like hurricanes and tornadoes, which occur frequently but usually produce limited damage and relatively few casualties, the panelists said. But government officials are just beginning to develop plans for events like a major tsunami or a large asteroid hurtling toward a populated area.

The difference between a disaster and a mega-disaster is scope, the scientists say. For example, Hurricane Sandy was defined as a disaster because it caused significant flooding in New York and New Jersey last year, says Lucy Jones of the U.S. Geological Survey. But the flooding was nothing like what happened to California in the winter of 1861 and 1862, she says.

"It rained for 45 days straight," Jones says, creating a lake in the state's central valleys that stretched for 300 miles. The flooding "bankrupted the state, destroyed the ranching industry, drowned 200,000 head of cattle [and] changed California from a ranching economy to a farming economy," she says. 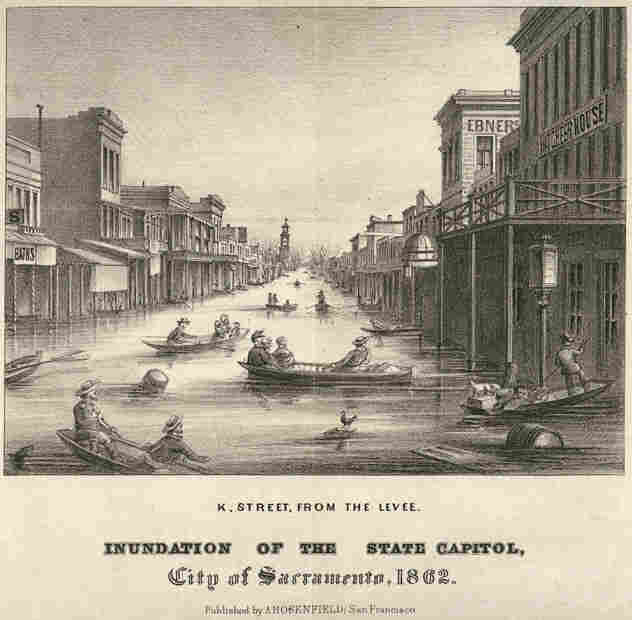 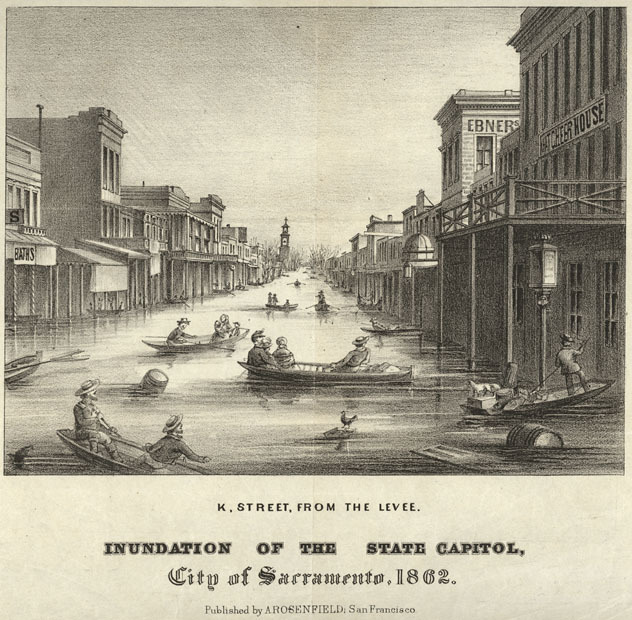 This lithograph from 1862 shows a flooded downtown street in Sacramento, Calif.

That was a classic mega-disaster, Jones says. So she and others have been studying the event in an effort to make the state better prepared for the next big flood.

One thing they've learned is that the California flood was caused by something known as an atmospheric river, a ribbon of concentrated water vapor that can produce extreme storms. "They have the rain potential of hurricanes — or even more so because they go on for weeks," she says.

Today, though, meteorologists know how to detect the formation of these atmospheric rivers, Jones says. Also, California now has an extensive system of dams and flood control channels that didn't exist in the 1860s.

So it should be possible to start releasing water before the system gets overwhelmed, Jones says. "There's always something you can do to make it less of a disaster than it might otherwise be if you've got enough information. And that's the point of the science."

Even so, Jones says, studies show a storm slightly smaller than the one in the 1860s would cause flood damage in nearly a quarter of the homes in California.

Another threat from the skies comes in the form of asteroids and comets. And in this case, the damage can be global. It was an asteroid, after all, that is thought to have wiped out the dinosaurs and many other species about 66 million years ago. 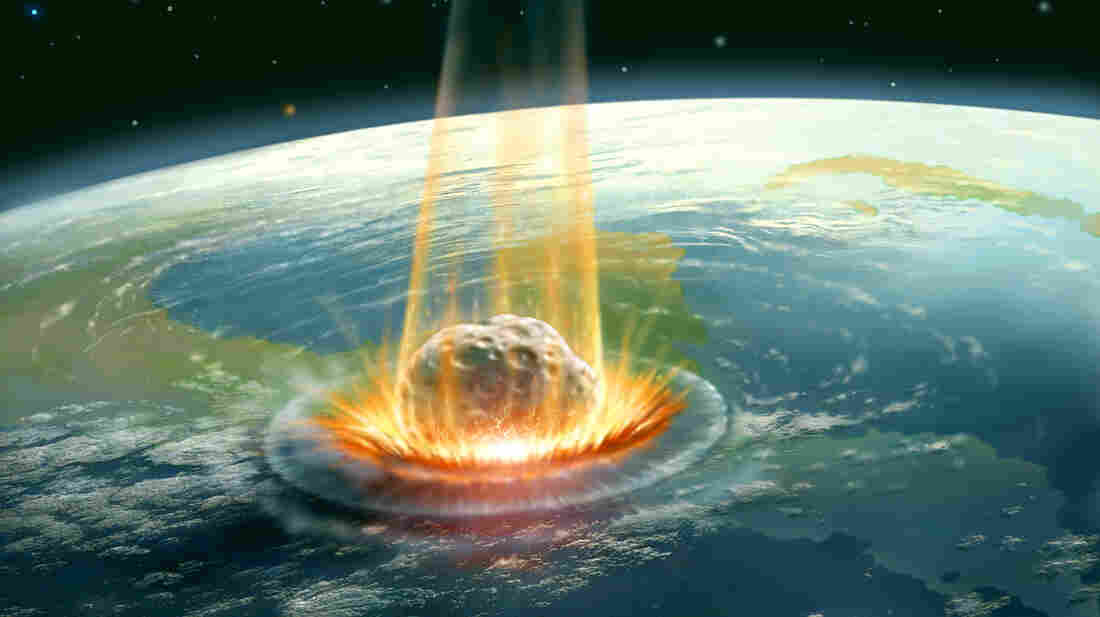 An asteroid impact like the one in this illustration may have killed off the dinosaurs. David A. Hardy/Science Source hide caption

That asteroid was probably several miles across, scientists now believe. But an asteroid just half a mile across could still create a dust cloud that would circle the globe, says NASA's Lindley Johnson.

NASA's strategy for big asteroids is to "find them before they find us," Johnson says. And so far, the agency has found more than 10,000 of these "near-Earth objects," he says.

The idea is to identify any large object headed toward Earth, and then deflect it, Johnson says. "Hit it with something really hard and fast, and the change in velocity would change the orbit enough that it would not hit the Earth."

There's always something you can do to make it less of a disaster than it might otherwise be, if you've got enough information. And that's the point of the science.

Even Japan, which has been preparing for tsunamis for decades, was overwhelmed by the damage to coastal cities, says Eddie Bernard of the National Oceanic and Atmospheric Administration. The event "exceeded their capacity to recover because in many cases the city was washed away," he says, adding that tens of thousands of people who lost their homes are still living in government housing.

But the result would have been much worse in the U.S., Bernard says. "Japan was much better prepared, and they are recovering much easier than perhaps we would because they've thought this thing through," he says. For example, roads were restored in weeks, and communities that survived had electricity again within 10 days, he says.

A government study found that if a similar tsunami struck the coast of Oregon, some areas would be without electricity for months and without water for more than a year.

If that happened, Bernard says, residents would abandon their homes and businesses would fail, leaving nothing but a ghost town.

To avoid that scenario, the Oregon Legislature has been holding hearings on how to make communities more resilient in the event of a catastrophic earthquake and tsunami.