Accessibility links
Student Loan Rates Set To Double On July 1 The interest rate on government-backed student loans is going to double on Monday. As a result, some 7 million students expected to take out new Stafford loans could be stuck with a much bigger bill. 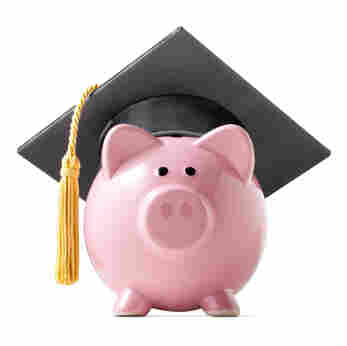 The interest rate on new Stafford loans is going to jump from 3.4 percent to 6.8 percent Monday. iStockphoto.com hide caption

The interest rate on government-backed student loans is going to jump from 3.4 percent to 6.8 percent Monday.

Republicans, Democrats and the Obama administration could not agree on a plan to keep it from happening. Lawmakers say a deal is still possible after the July 4 recess. But if they don't agree on a plan soon, 7 million students expected to take out new Stafford loans could be stuck with a much bigger bill when they start paying the money back.

It has been one of the more heated debates in Washington this year.

Nella Lipton, a business major at the University of Maryland, says she tried to keep up with the news because she's taking out $10,000 in Stafford loans this school year.

"And it's kind of sad because you hear about everybody defaulting on their loans when they graduate, but I'm just hoping that with my major, I'll be able to get a job," Lipton says.

It upsets her that politicians would add to the stress by not having done something sooner to keep the interest rate from rising.

"They're sort of putting the burden on a younger generation, and once we are old enough to vote and once we're part of the economy and we ... default on our loans, it's going to be a big issue, and they're going to regret it," she says.

"We need some way to stabilize this process in a way that maintains relatively low interest rates but also has stability," he says.

McPherson, a former deputy secretary with the Treasury Department, says of all the competing plans lawmakers have considered, the Republican plan and President Obama's plan make the most sense over the long term.

Both tie student loan interest rates to the 10-year Treasury rate, which is the market rate the U.S. government pays when it borrows.

The president's plan would add another percentage point to that, pushing it up to about 3.4 percent — a rate that students would be able to lock in for the life of their loans.

"I think that's probably a realistic way to approach it," McPherson says.

Under the Republican plan, the interest rate for new Stafford loans would start at 5 percent and be allowed to float every year like an adjustable mortgage rate, but would be capped at 8.5 percent. The president's plan offers no such cap.

Why President Obama and Republicans continue to bicker considering that their plans are similar is disappointing — but not surprising, McPherson says.

"In Washington, we have a hard time doing anything short of the crisis, the cliff, the next moment. But I think in these plans, one could find an acceptable answer," he says.

Getting students and their parents to understand all of this, McPherson says, is not easy. These proposals are complicated.

Kyle Siefring, a political science major at the University of Maryland, is applying for his first Stafford loan this school year. He says politicians seemingly couldn't care less about the interest rate students have to pay — for good reason.

"College students don't vote like other people do," he says.

And that's just like what politicians in Washington do, Siefring says. Congress and the administration are reportedly close to agreeing on a plan to keep interest rates from doubling, but not before the July 1 deadline.