Accessibility links
'The Heat' Is Absolutely Revolutionary, For Being Mostly Ordinary The Heat is rare for being a buddy-cop movie about women, but the reason to see it? It's really funny. 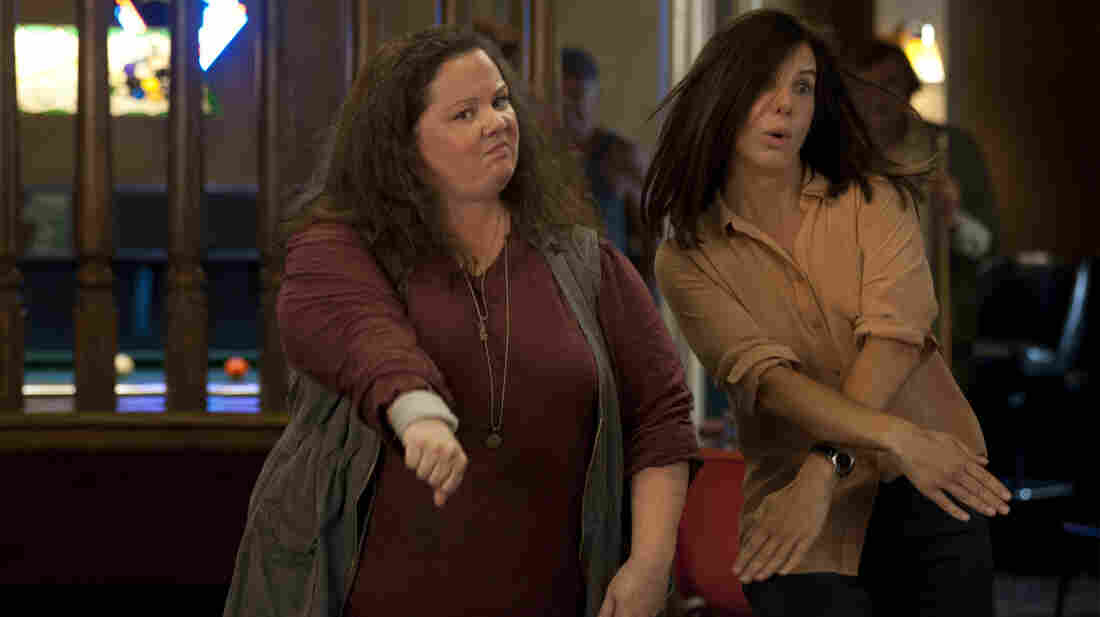 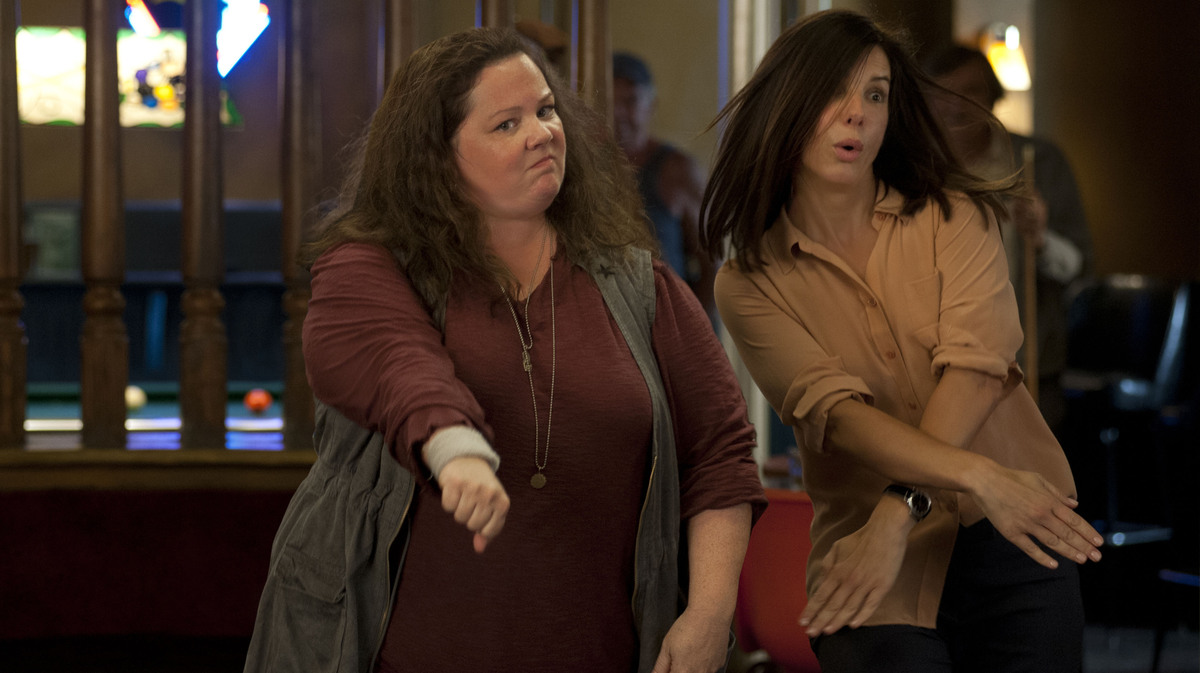 Melissa McCarthy and Sandra Bullock in The Heat.

The date: June 14, 2013. The writer: me, in despair, without a single non-art-house movie with a female lead playing anywhere near me. The piece: "At The Movies, The Women Are Gone."

And now, two weeks later, it's opening day for The Heat, the buddy-cop comedy starring Melissa McCarthy and Sandra Bullock, and The Bling Ring is playing, so instead of my local multiplex having zero percent of its non-animation showtimes starring women, now it has 22 percent! For this weekend only, men dominate only 78 percent of the showings! Girl power! Year Of The Woman!

But here's what does matter: Not only is The Heat very, very funny, but it's made with a delightful combination of self-awareness about the fact that it's a rare buddy-cop movie about women and total commitment to being a buddy-cop movie, not a female-buddy-cop movie.

Let me tell you how it hooked me, without spoiling anything: there is a cliché about scenes in which women sit in their apartments. (There are actually lots of clichés, but there is this one in particular.) The Heat shows Sandra Bullock, who plays the uptight cop to McCarthy's rule-breaking cop, enjoying some time at home. It appears for a moment to be embracing this cliché. I felt my heart sink. I felt my eyes roll. And then suddenly, in what's both a very funny bit and a moment of tremendous meta-commentary, the cliché is upended and bent over the knee of screenwriter Katie Dippold and director Paul Feig, where it receives a playful but firm spanking.

This joke works for anybody, but it is specifically designed to delight people who hate clichés about single women in movies. Now think about that. It is a major motion picture debuting this weekend in your multiplex, and it is making wry, winking jokes about gender portrayals in major motion pictures playing in your multiplex. It was such a delightful moment, and such a relief, that I almost ran to the front of the theater to curl up physically in the glow of it. (As much as I love the writing of A.O. Scott — and I do — his review of the movie in The New York Times both unforgivably gives away this bit and, to my eye, misunderstands it.)

But here's the real feat: About 95 percent of The Heat could be made and would still be considered comedy if both of the protagonists were (1) men, and (2) thin. The horrible thing that's so often done to actresses in comedies and especially to actresses with bodies like McCarthy's is that the things they're given to do are only funny — or significant --because they're women or because of their size. Funny to hear girls swear, funny to see girls fight, funny to see big ladies fall down, very important that everyone get a boyfriend, crucial that someone get a makeover and show up in a hot dress.

Nope. Nope, nope, nope and nope. I don't believe either of them dresses up once in the entire movie, and the only thing that sneaks up on a makeover scene is a twisted, tortured parody of one (which contains the Spanx joke from the trailer that's very different in context).

But critically, it also doesn't deny McCarthy the delightful contrast between her dimples and her dirty mouth, because her combination of sweetie-pie and vulgarian has always been a major element in her comedic style (which wasn't entirely obvious before Saturday Night Live and Bridesmaids). It's a movie that respects her, but doesn't patronize or try to protect her from the acting-a-fool elements of making broad comedy in order to be adequately feminist about her body. If she's to be respected for her talent, she's got to be allowed to do as she likes and not forced to only make movies where she bats her eyes and banters on the theory that to do otherwise is to be someone else's grotesque. When she chooses to be, Melissa McCarthy is her own grotesque, thank you very much, just as much as Kristen Wiig is. And that's her prerogative.

There's a moment late in the film when Bullock (who I've always found very funny in an entirely different way) is executing a lengthy physical comedy bit, and I thought, "If Melissa McCarthy were doing this, people would claim it was just a funny-fat-person bit and that a thin person would never do it." What I like about The Heat is that both women throw themselves equally into the gaping maw of its goofy comedy, which has lots of f-bombs and is sometimes a little bloody (in the tradition of cop movies) but, if it matters to you, is nowhere near as scatological as Bridesmaids was.

The underlying crime plot in The Heat is pretty forgettable, as it is in just about every movie of this kind that exists to create funny sequences between comic actors. But to evaluate the plausibility and the heft of the crime plot here is to evaluate the accuracy of the astronomy in Spaceballs. Who cares? We came for the jokes.

In the care of a director like Feig who self-evidently reveres her, McCarthy is an actress who can just be on camera, being funny, and hold the scene for long moments that get funnier and funnier just because she doesn't stop. If you've seen the end credits from This Is 40, you've seen her do this — this is just a movie where that's the primary weapon, deployed very effectively.

There are two answers to the fact that summer brings nothing but action movies and buddy comedies crawling with dudes. One is to make something else entirely; The Heat is not that. The other is to make a really strong version of a formula summer picture that shatters the gender element of the formula and demonstrates that you can make perfectly good, really funny broad buddy-cop movies with women, provided you give the performers a break and don't saddle them with also trying to simultaneously make sensitive romantic comedies or uplifting makeover tales.

And The Heat most definitely does that.