Accessibility links
Despite Alzheimer's, Couple Holds Tight To Old Memories Pansy Greene, 73, is still in the early stages of Alzheimer's. She and her husband, Winston, describe their "journey," a term they use to refer to much more than Pansy's struggle with the disease. 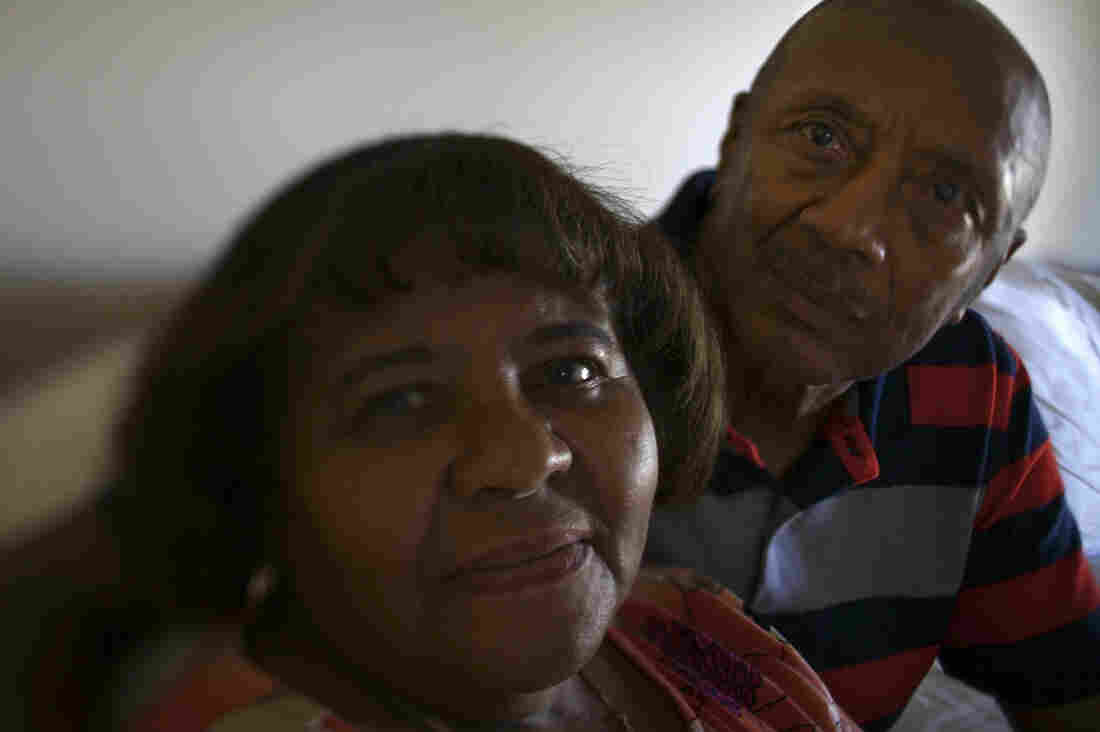 Pansy Greene, 73, is one of 5 million Americans with Alzheimer's disease. She and her husband, Winston, say that their daily lives have changed little despite the diagnosis. David Gilkey/NPR hide caption 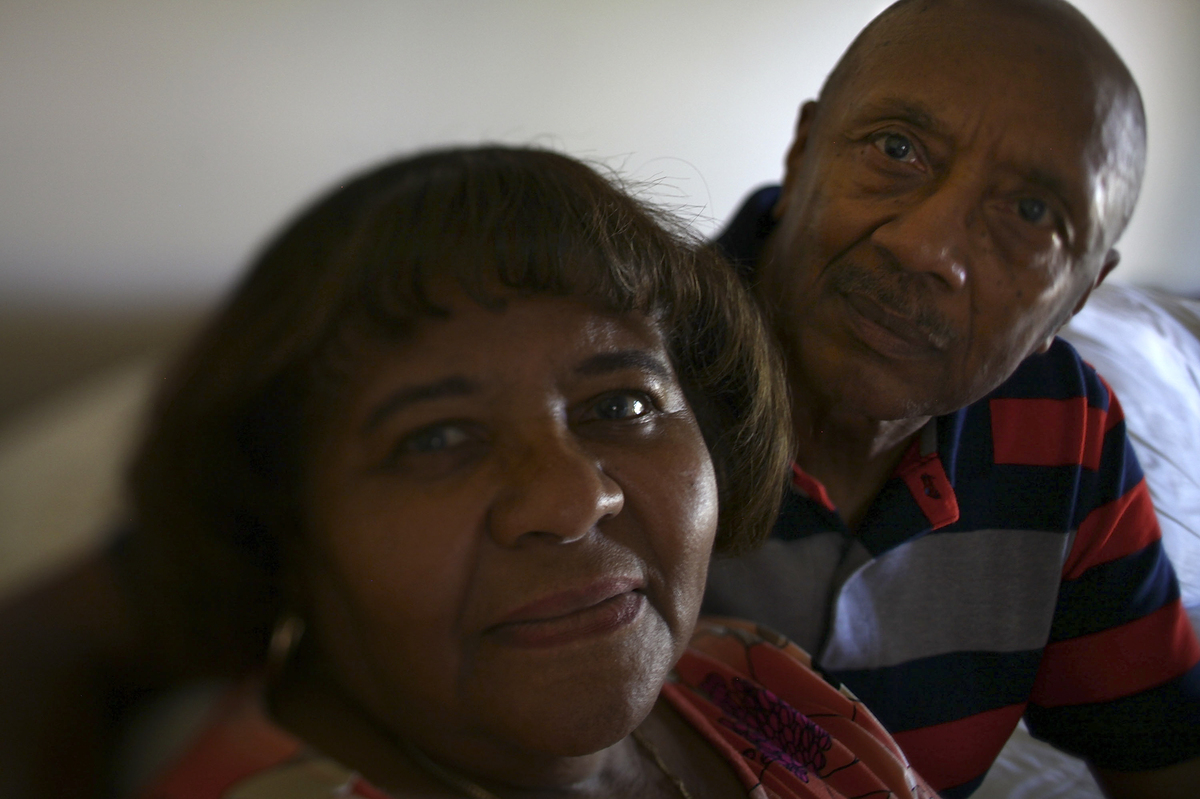 Pansy Greene, 73, is one of 5 million Americans with Alzheimer's disease. She and her husband, Winston, say that their daily lives have changed little despite the diagnosis.

Right now, 5 million Americans have Alzheimer's disease and other dementias. One of them is 73-year-old Pansy Greene. She's in the early stages of Alzheimer's, and she and her husband, Winston, want people to know that so far, their daily lives have changed little despite the diagnosis.

They sit side by side on a loveseat in their den, each with a dog in his or her lap to cut down on the barking. That makes it easier for the Greenes to talk about what they call their "journey," a term that refers to much more than Pansy's struggle with Alzheimer's; it describes the partnership that began when they met at a party as teenagers.

"He didn't let go of me the whole night," recalls Pansy. "He wouldn't let anybody else dance with me." He asked for her phone number. "I guess I gave it to him," she says with a laugh.

Pansy and Winston Greene got married when she was 16 and he was 18. They raised three daughters and spent their entire careers in the aerospace industry. Winston worked on the B-1 bomber; Pansy worked on the space shuttle. They now have the kind of retirement people dream of: a comfortable suburban home with a view of the hills north of Los Angeles. It's close to two of their daughters, grandchildren and great-grandchildren.

But one day about three years ago, Pansy got lost trying to drive home from a place she went all the time. She called her son-in-law, "and he said, 'Just tell me the cross streets, and I'll come and get you.' " It didn't take him very long, "so I wasn't that far from home," says Pansy, "but I couldn't find my way out." 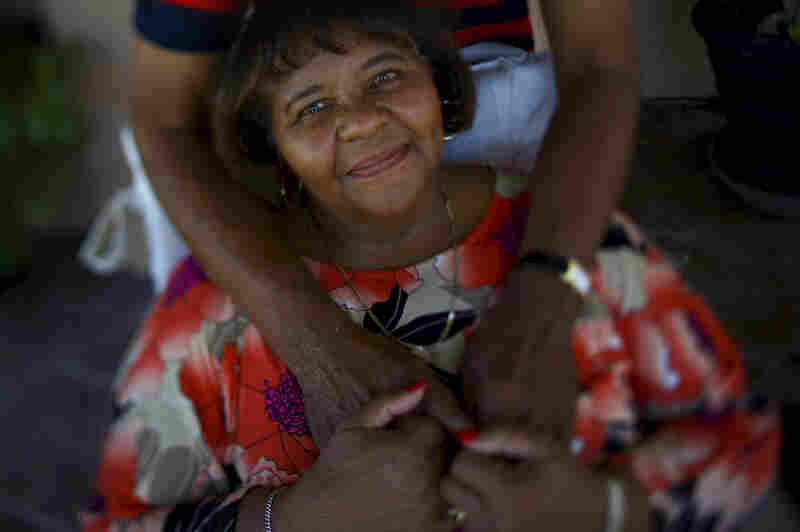 The Greenes say they take it a day at a time and relish the many long-term memories they've shared for nearly 60 years. David Gilkey/NPR hide caption 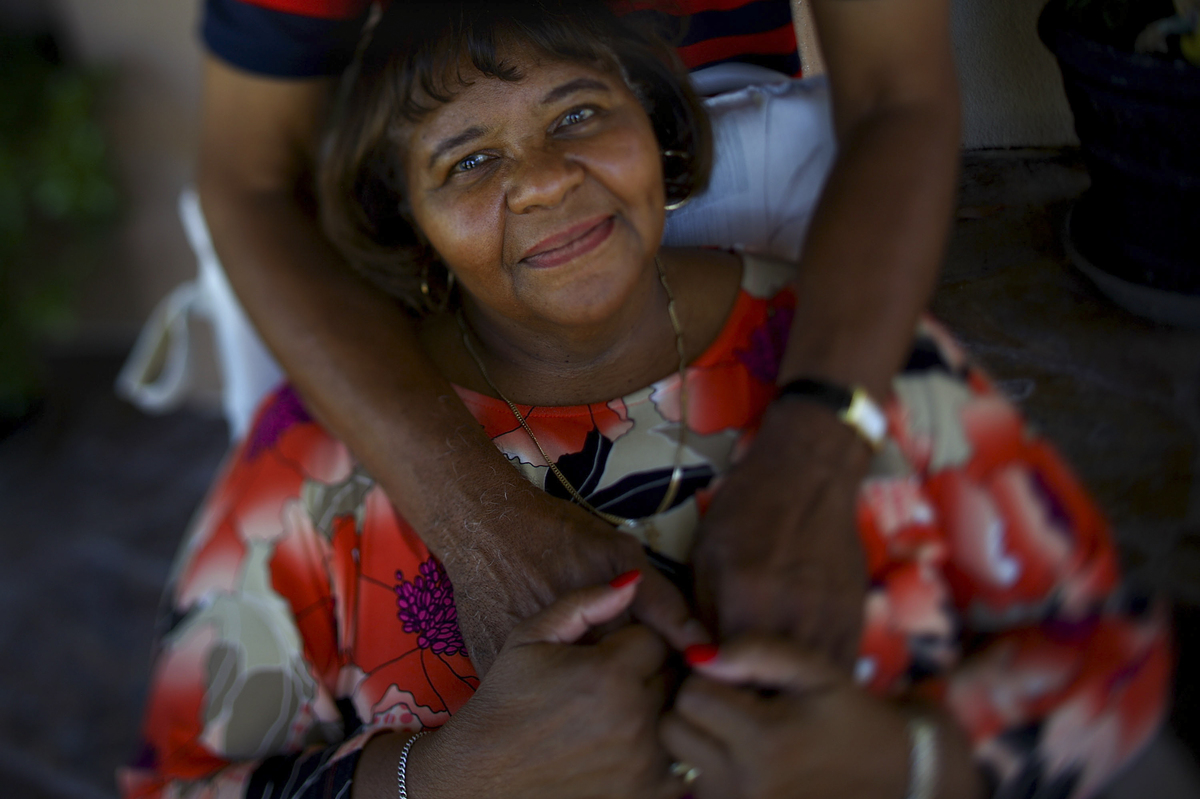 The Greenes say they take it a day at a time and relish the many long-term memories they've shared for nearly 60 years.

In the early stages of Alzheimer's, it's short-term memory that goes first. Winston noticed that Pansy was forgetting things that had just happened. She'd talk to her granddaughter on the phone, for example, and then the next day when her granddaughter called again, Pansy would say "Oh my goodness, it's good talking to you. I haven't talked to you in a long, long time." Winston says those were the "subtle things that says that maybe there might be a problem."

But it was a yearlong quest to get a diagnosis. The Greenes say the family doctor told Pansy, "Well, you're getting old. We all forget things." But he gave her a prescription for Aricept, a drug that helps with memory loss in Alzheimer's patients, though it doesn't halt the progression of the disease.

Eventually she got a firm diagnosis at the University of California, Irvine. By that time the diagnosis wasn't a shock. But when she gave family members the news, she was surprised to learn that several relatives — living and dead — also had Alzheimer's.

"Everybody's so secretive about everything," Pansy says. "Nobody talks about it. I said, 'Nobody told me that our cousin died of Alzheimer's. ... Why are you guys keeping it a secret?' "

So she told all of her family members about her own diagnosis, "so they'll know where to go and get treatment or get some help" if they ever need it.

Family history isn't Pansy's only risk factor. Her high blood pressure may have played a role. Also, African-Americans are roughly twice as likely to get Alzheimer's as whites. But she doesn't fret over what she can't change. She's focused on doing what she can.

"It's helping me a lot being active," she says, "and doing my crossword puzzles." But mostly she reads the Bible. "It helps me to focus and think."

The support groups she attends along with Winston also help. He says the changes in their life have been small and gradual.

"There are certain things that Pansy was doing that I'm doing now," Winston says. For example, he's taken over writing the checks. But "every so often," he says, "I would say 'Pansy, go in and write the checks,' and I think I do that just to see if she can still do it the way that she was doing it [before]. And she can."

But he's had to become more patient.

"If I see that Pansy may forget something, I don't have to say, 'Oh well, Baby, you just told me that,' " says Winston. "That's what I have to really work on myself." Instead, he tries to say, " 'We put it on the calendar,' and then [I] just answer her question."

Patience is all Pansy asks for. "That's all I can do," she says.

One Day At A Time

And life goes on. They still go to the movies and baby-sit their great-grandkids. And they're continuing to travel. They've gone all over the world with a group of friends. This fall they're taking a two-week river cruise in Russia. They had to book it more than a year ago. It was a risk.

But Winston says that "one of the keys [is] you have to have faith. And we just had the faith that things would be OK when we go in September. We're not ... holy rollers, but we believe, and the faith, I think, has taken us to where we are today."

One way Winston maintains his faith in the future is by not thinking about it too much. Pansy's held her own for three years, but he knows that won't last forever.

"I cannot look ahead," he says. "I would go crazy, and I'm not about to do that." Then he laughs, "We don't need no problems with me in this household."

The Greenes say they're taking it a day at a time — and relishing the many long-term memories of the journey they've shared for nearly 60 years.

NPR's Ina Jaffe covers aging, and she's going to check in with the Greenes from time to time. This is their first conversation.