Accessibility links
Rescued, Hitchcock's Silent Films Flicker Anew Alfred Hitchcock is best known for suspense films like Psycho and Vertigo, but the British director actually began his filmmaking career during the silent era. The Hitchcock 9 is a collection of his silent films, and the only way to see them is the old way — going to the theater. 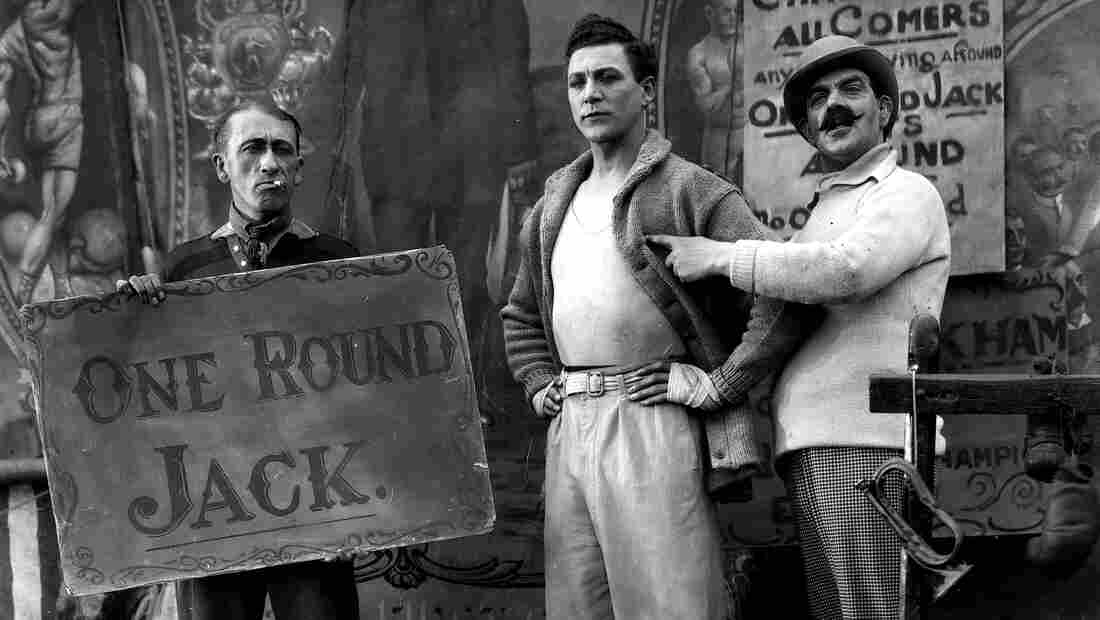 Carl Brisson stars as sideshow boxer "One Round Jack" in Alfred Hitchcock's 1927 film The Ring. That and eight more of the master's early silent features have restored by the British Film Institute. Rialto Pictures/BFI hide caption

Alfred Hitchcock's early silent films have resurfaced in what's being called the single biggest restoration project in the history of the British Film Institute, and now "The Hitchcock 9" are touring the U.S. this summer.

Hitchcock is best known for his Hollywood suspense films of the post-war era, like Psycho and Vertigo. But the director was born in England and began his directing career there during the silent era. In fact, he loved both seeing and making silent films.

"Silent pictures are the pure motion picture form," he told Francois Truffaut in a famous 1962 interview for the book that the French critic and director wrote on Hitchcock.

Curious about how experts go about restoring a motion picture? The British Film Institute has a series of articles you might enjoy.

"He thought it gave you more scope as a filmmaker," she says. "It was a more elegant way of making films. It obliged you to tell your story in pictures, which is what the cinema is all about, rather than falling back on dialogue. And he continued to make films, even in the sound era, that had that quality. He could tell stories with pictures incredibly well."

The film institute's restoration of The Hitchcock 9 has Queen Elizabeth's jubilee to thank. Dixon says all of the big cultural institutions tried to do something to celebrate.

"And we chose our big icon, you know," Dixon says. "Drama has Shakespeare. Literature has Dickens. We have Hitchcock."

So the institute scoured the world, finding copies forgotten in archives, adding and rearranging bits and pieces. Restorers discovered a whopping 20 minutes to add to the director's first film, The Pleasure Garden, made in 1925. Like many of the silent Hitchcock films, it's not a thriller; it's a steamy showgirl drama.

Music To Fill The Silence

The film institute also commissioned new scores for some of the films. Stephen Horne, a veteran of live silent film performances, composed a lyrical score that he'll play live at some showings of The Hitchcock 9 in the U.S.

Horne says he wasn't intimidated by following in the footsteps of Hitchcock's famous musical collaborator on Psycho and Vertigo, Bernard Herrmann, because they were doing different things.

"There have been cases," Horne says, "where sound film composers have scored silent films and it hasn't been effective — and vice versa — because the technique is not as transferable as you might think."

The British Film Institute commissioned different kinds of music for The Hitchcock 9, in order to reach different kinds of audiences. Popular British rapper and saxophonist Soweto Kinch wrote and recorded a jazzy, syncopated score for Hitchcock's boxing drama The Ring. Yet the Colorado-based Mont Alto Motion Picture Orchestra takes a different approach to the same scene.

What Would Hitchcock Hear?

The Monto Alto group is engaged in its own kind of restoration project. The music of the orchestra, which will play at several stops of the American tour, represents a much earlier jazz tradition. The musicians find and play only the music that was available to movie accompanists in the silent era.

Movies were often accompanied by different pieces of music depending on the theater and the musicians. Few silent films had composed scores; most had lists of suggestions for music to be played. But the orchestra's Rodney Sauer could not find any record of what might have been played in picture palaces and in small neighborhood theaters for Hitchcock's films.

"To be honest, I think Hitchcock would have hated it," Sauer says of the selections made by musicians at theaters. "He thought music was extremely important. He always wanted the perfect pieces to be played to his films. You know, in the silent era he was creating these films and sending them out, and God knows what would be played to them. It might be nothing."

So Sauer and the Mont Alto Motion Picture Orchestra picked what they thought seemed appropriate for the time and the films.

If you want to see — and hear — The Hitchcock 9, you'll have to do it in a theater. There are no plans — and no financing — for a DVD set.