Accessibility links
Prime Minister's 'Loose Cannon' Style Divides Greece A year into his tenure as prime minister at a time of economic crisis, Harvard-educated economist Antonis Samaras is viewed with suspicion by many Greeks. "He always leaped into the unknown and usually fell in the crevice," one political analyst says. 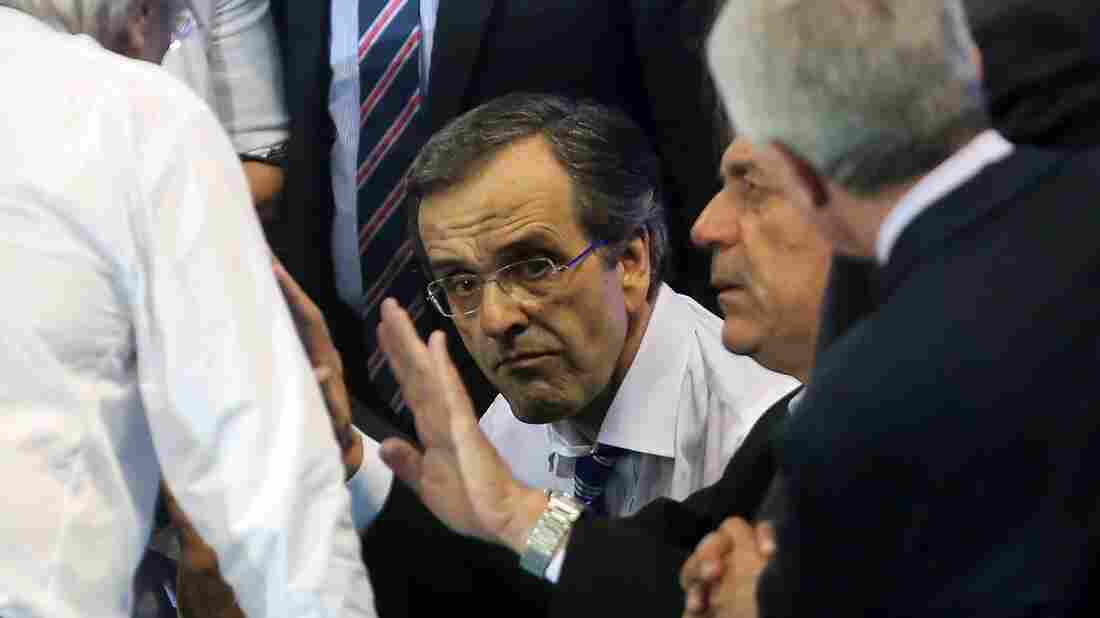 A year into his tenure as prime minister, Antonis Samaras is viewed with suspicion by many Greeks. Eurokinissi/AFP/Getty Images hide caption 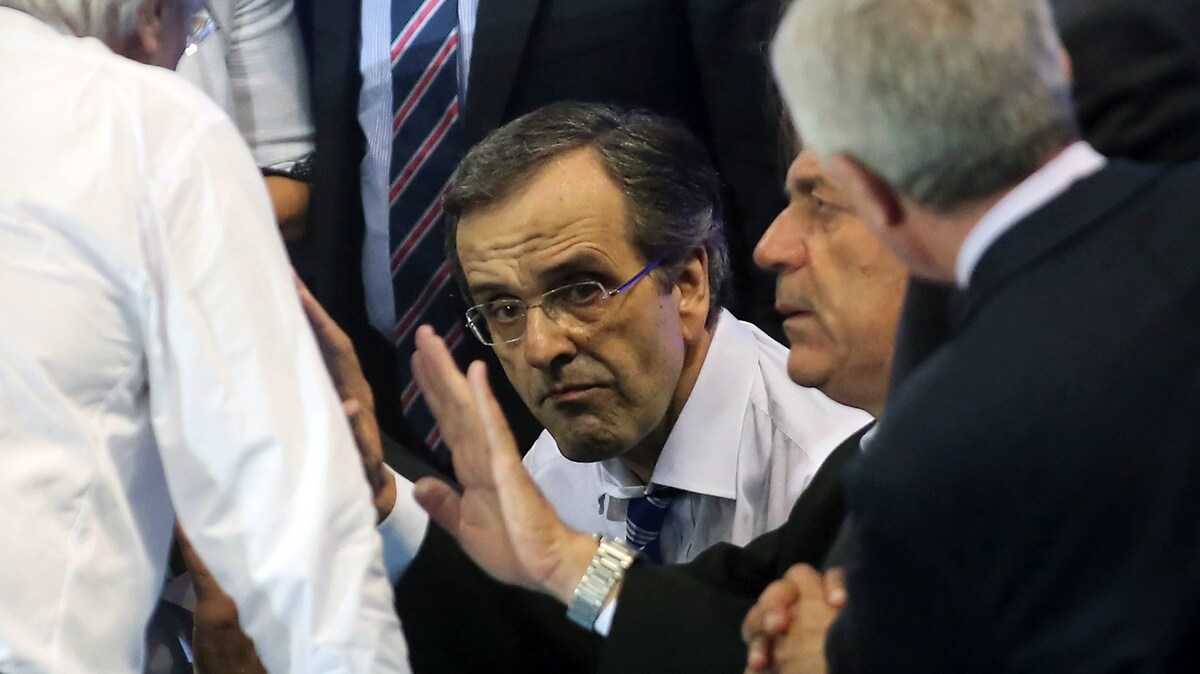 A year into his tenure as prime minister, Antonis Samaras is viewed with suspicion by many Greeks.

Antonis Samaras became prime minister of Greece a year ago, when the world assumed his country, battered by debt and austerity, would exit the eurozone.

"Today, the Greek people express their will to stay anchored with the euro, remain an integral part of the eurozone, honor the country's commitments and foster growth," Samaras said that night. "This is a victory for all Europe."

European leaders believed Samaras, a 62-year-old, U.S.-educated economist from a well-connected family, would tow the line on austerity.

But he was also known as a loose cannon, says political analyst Thanos Veremis.

"He always leapt into the unknown and usually fell in the crevice," Veremis says.

As a young foreign minister in the early 1990s, Samaras took a leap that brought down the very government he was serving.

He ignited an embarrassing diplomatic crisis by refusing to let a newly independent Balkan country call itself Macedonia. The name, he declared, was historically Greek.

He expected nationalist outrage over protecting this special Greek identity to sweep him into power then, Veremis says.

"He thought he was riding a wave of patriotism which emerged at the time, but you know such waves don't last forever," he says. "They're here today, gone tomorrow."

A Rise, A Return, Then A Reversal

Samaras' nationalism has its origins in his own family. His great-grandmother was Penelope Delta, who wrote patriotic children's books and committed suicide in 1941, when Nazi troops entered Athens.

He graduated from Athens College, an elite private secondary school established by Americans. Aristos Doxiadis, an entrepreneur who went to high school with Samaras,remembers him as a "cheerful guy who was very good at sports." 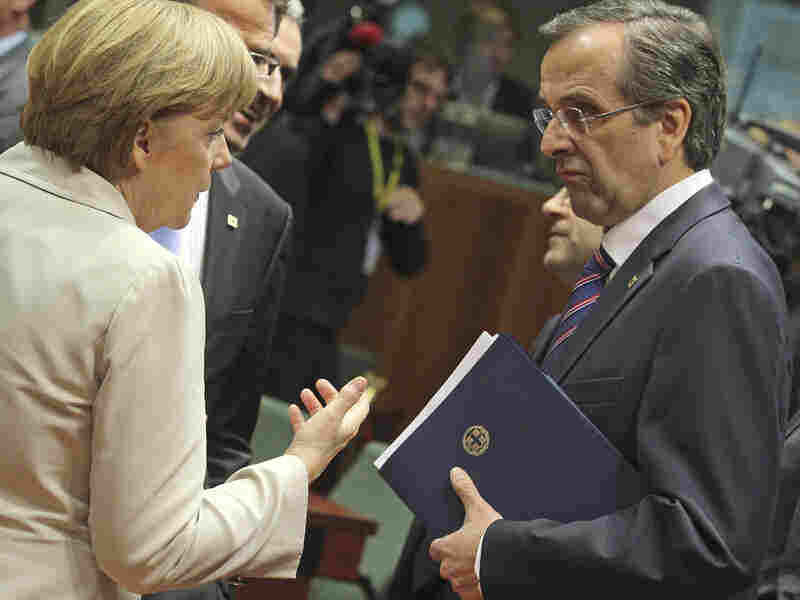 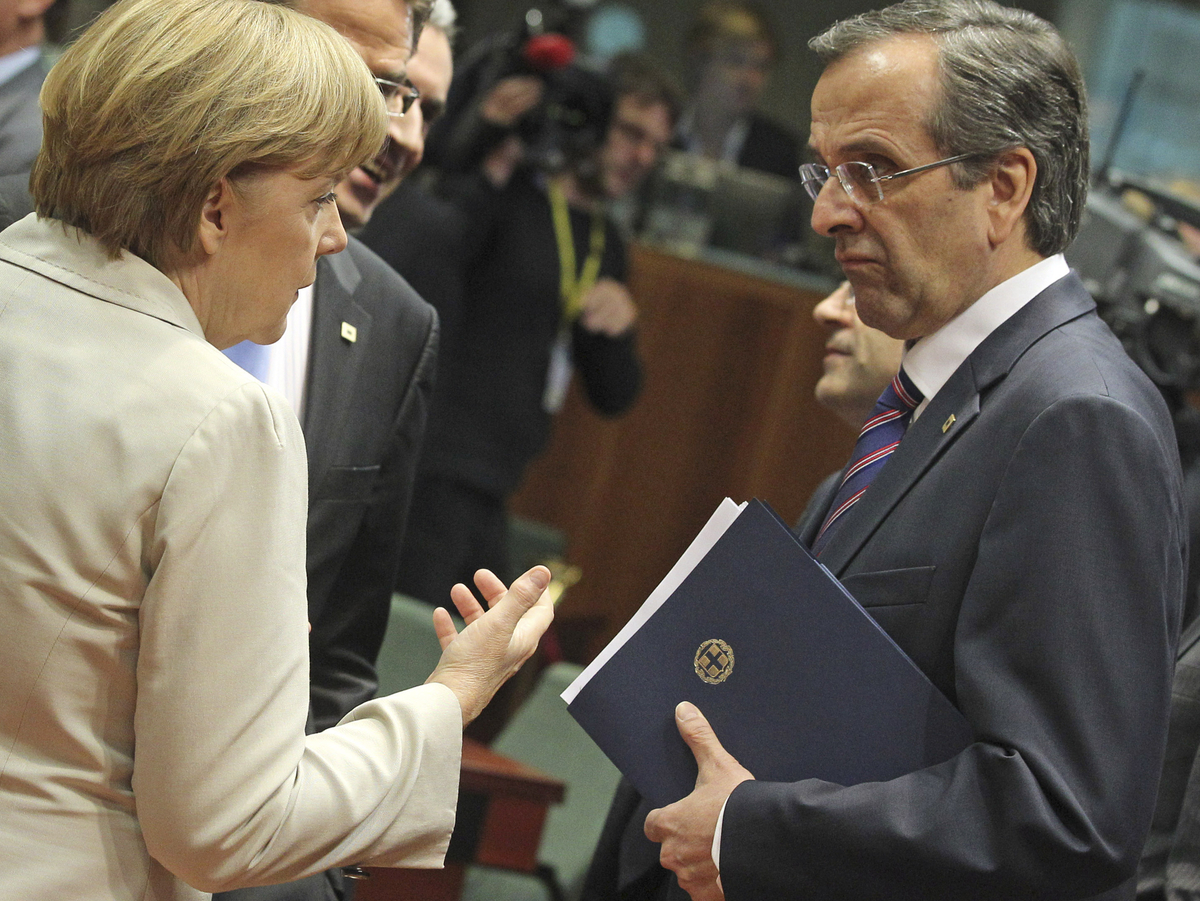 He attended Amherst College in Massachusetts in the early 1970s. He lived in the same dormitory as George Papandreou, the scion of Greece's most prominent political family and a future prime minister himself. He also got an MBA at Harvard.

Samaras was a rising star in Greek politics until the Macedonia debacle, which kept him out of politics for a dozen years. He returned as the leader of the New Democracy Party in 2009; the following year he rode another wave — this time, against popular outrage over austerity measures — to unseat Papandreou as prime minister.

Papandreou had shocked world markets by revealing the country was deeply in debt. To save Greece from bankruptcy, he asked for billions in bailout loans from the European Union and the International Monetary Fund, which demanded painful austerity measures in return.

Samaras accused Papandreou of destroying the country. He refused to negotiate with anyone, including German Chancellor Angela Merkel, now his ally.

"During the first year of the bailout, [Samaras] really stoked the fires of populism and was not constructive at all," Doxiadis says. "So when he took over the government and started actually implementing, with some zeal, measures that needed to be implemented, yes, I was pleasantly surprised, like quite a few people."

But some see Samaras as hypocrite for supporting the austerity policy he used to blame for killing the Greek economy, now in its sixth year of recession.

The private sector has been especially hard-hit. Tens of thousands of businesses have gone under in the last three years.

Among the latest is Katselis, a well-known producer of baked goods. Nearly a thousand people there are set to lose their jobs, including 55-year-old Olga Dimitriadou, who has worked at the factory for 13 years.

"Politicians protect the public sector and let the private sector flounder," Dimitriadou says. "They only care about staying in power." She says politicians give their friends jobs in the public sector, where, until recently, the constitution forbade layoffs.

So earlier this month, Samaras hoped to appeal to reformers by abruptly shutting down the state-run Hellenic Broadcasting Corporation and firing its staff of more than 2,600 people.

He complained the staff there was always on strike and failed to broadcast good news about the country and his government.

Instead of embracing the shutdown, many Greeks saw it as dictatorial.

They joined the laid-off broadcast workers, who still occupy the network's suburban headquarters, at protest concerts outside the building.

Members of his own coalition government were also shocked. The Democratic Left, one of two parties supporting the Samaras government, which didn't win enough votes to govern alone, resigned from the coalition in protest.

"He only consulted us when he wanted laws passed," says Maria Yannakaki, a Democratic Left parliamentary deputy. "The rest of the time, he ignored us."

Samaras promised to reopen the broadcast network with a much smaller staff hired on merit, but his plan sounds vague, as if he had hatched it over a weekend, Veremis says.

"His shortcoming is that he's a man of checkers rather than chess," he says. "I mean, he makes a move, which is interesting, but there's no follow-up. And that is Samaras' personality."

Last week, he appointed a new cabinet of party loyalists after some members of his government resigned. As he takes his latest leap into the unknown, he vows to stay in office.