Accessibility links
15-Ton Particle Ring Travels To Chicago By Land And By Sea A lab in Chicago can produce particles called muons, but it needs an electromagnetic ring on Long Island to produce them. Since the 50-foot ring can't be taken apart or flown over houses, movers drove it to the shoreline and will sail it down the East Coast on a sea barge and up rivers to the Windy City. 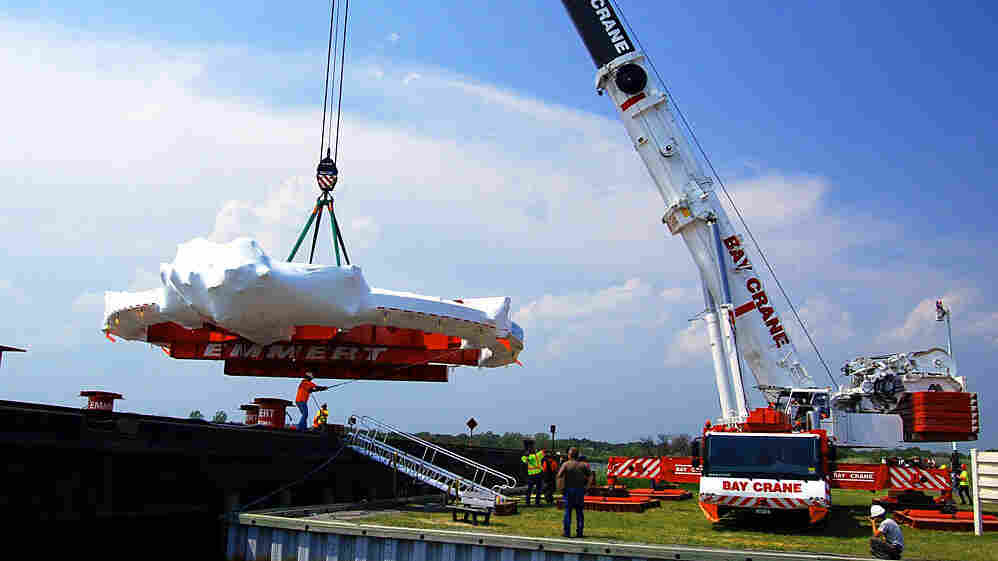 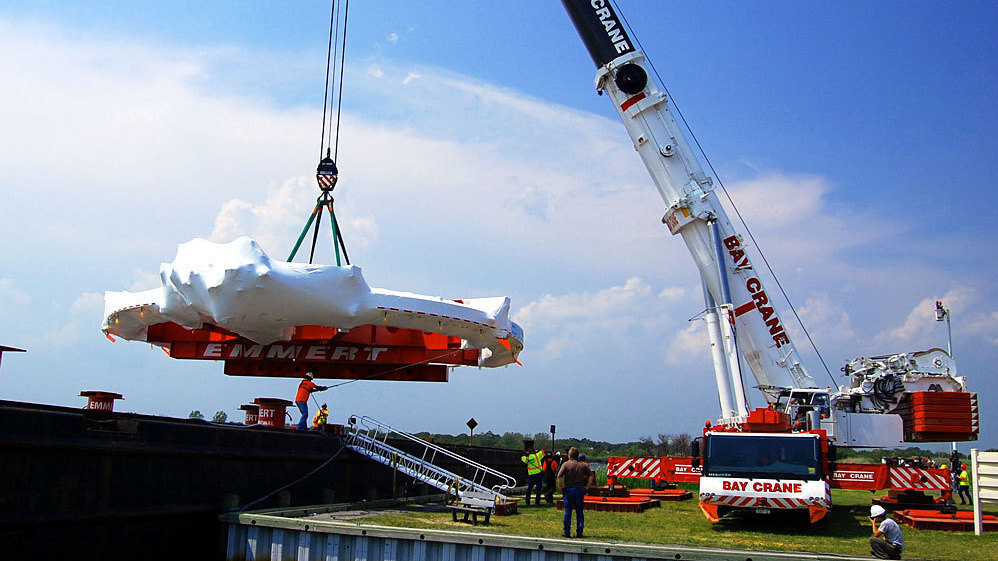 The Muon g-2 is very powerful electromagnet that creates a strong magnetic field, allowing scientists to store a special particle.

It looks almost like the Millennium Falcon, creeping ever so slowing, taking up the entire roadway on New York's Long Island. A team of spotters walks alongside, calling out trees that need cutting and road signs that need to be taken down.

Its name is the Muon g-2 (pronounced g minus two) and it's a very powerful electromagnetic ring capable of carrying 5,200 amps of current, says Chris Polly, the lead scientist for the ring's experiments.

"It creates a very strong magnetic field that allows us to store a special particle called a muon," he says.

A muon is a sort of phantom particle that exists only for a very short time after a particle collision. The g-2 traps muons and then uses them to probe for evidence of other new particles no one has seen before. Back in 2001, scientists at Brookhaven National Laboratory on Long Island found hints of new particles, but to be sure, they need more muons. Fermi National Lab, located outside Chicago, has a big accelerator that can produce loads of them, but no ring. So, you just need to bring the ring to the accelerator.

"The weight is really not a problem. It weighs 15 tons, and so you know that's sort of the equivalent of, you know, six or seven cars," Polly says. "The difficult part is really the fact that it's 50 feet in diameter, it doesn't come apart, and we don't want it to flex more than 3 millimeters."

The easiest way to Chicago for a 50-foot ring is by sea barge. It'll go down the East Coast, around Florida, through the Gulf of Mexico, and up the Tombigbee and Des Plaines rivers.

But even getting to the barge is difficult. Scientists thought about airlifting it by helicopter, but Polly says that would have caused some issues.

"It turns out you can't just pick up a 15-ton ring and fly it over people's houses without asking them first," he says. "And that might have been possible over 6 miles of Long Island, but it was impossible over 30 miles of Chicago suburbs."

Physicists Find New Particle, Look for Answers June 21, 2013
Scientists Seek To Take The Measure of Antimatter May 3, 2013
A Natural Particle Accelerator, Far Above The Planet March 1, 2013

So, on land it moves at night in a rolling barricade on a 64-wheel tractor-trailer. Terry Emmert is in charge of the move. He had lights strung on the ring that make it look like it's levitating through town, which brought spectators out to watch the ring "fly" down the street.

"Probably a thousand people out alongside the road, cheering on and sitting in their lounge chairs, drinking their coffee at 2 o'clock in the morning," Emmert says. "It was amazing to see that many people out at that time of the morning."

Once it reaches the shoreline a crane lifts the g-2. It slowly hovers through the sky, swaying gently in the breeze as seagulls dance about. After a soft touchdown workers start bolting it to a special hydro dampening system.

"It did look like a big flying saucer coming across there, a big white one," Emmert says. "It looked like it was just floating across from the trailer over to the barge."

Emmert had the ring shrink-wrapped in white plastic to protect it from the sun and salt water. Weather is his biggest fear, so it will head for port at the first sign of rough seas. The logistics will be far more complicated once it reaches Chicago the last week of July. There, crews will have to take down utility poles and toll plazas to cut the 50-foot-wide path needed. The move is costing about $3 million, but scientists say that's far cheaper than building a brand new particle ring.