Accessibility links
Why You Can't Name New Moons And Planets Anything You Want Pluto's two newest moons received their official names this week, and the name that led in the popular vote was Spock's home planet, Vulcan. But it was rejected by the international team of astronomers who must approve every title bestowed upon the universe. 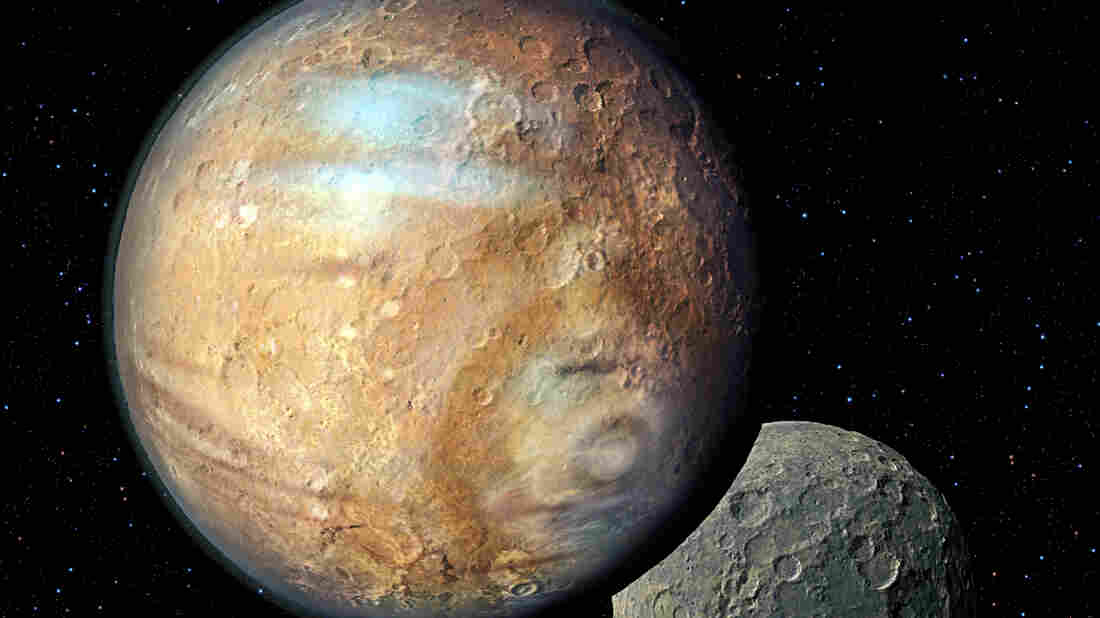 This artist's illustration shows Pluto and one of its moons, Charon. A global consortium of astronomers sets the rules for naming things like asteroids and moons throughout the solar system. Detlev van Ravenswaay/Science Source hide caption

A dispute over the names of two new moons of Pluto is highlighting a broader battle over who names what in our solar system and beyond. On one side is the International Astronomical Union (IAU), a venerable consortium of astronomers who have set the naming rules for the better part of a century. On the other side, a growing number of astronomers who feel the IAU has unfairly designated itself as the intergalactic naming police.

The moons were discovered in 2011 and 2012 by the Hubble Space Telescope. When first spotted they were given lengthy numerical identifiers; but until yesterday, they didn't have names. In astronomy, naming rights go to the finders, and in the case of the two moons, that honor went to a team led by Mark Showalter, a researcher at the SETI Institute in Mountain View, Calif.

Showalter decided to put the names to a public vote. "We opened up a website that included a ballot page where people could just check the boxes of the names they liked best," he says.

The IAU can try to claim the universe, but lots of star systems will be falling through its fingers.

The team also took suggestions. On Twitter, William Shatner, who played Captain Kirk on the TV series Star Trek, offered up "Vulcan," the name of Spock's home planet. Trekkies around the world got online and voted Vulcan way up — it was the runaway choice.

"I actually liked the name, and we did propose it to the International Astronomical Union," Showalter says. "But yeah, I kind of knew all along this was going to be a hard sell."

Vulcan was the name given to a hypothetical planet astronomers thought they had discovered between the sun and Mercury back in the 1800s. "Vulcan had already been used in the scientific literature, so it's a name that had already been taken," says Thierry Montmerle, the IAU's general secretary.

There were other problems. Under IAU moon rules, Pluto's moons should be named after mythical underworld figures. Vulcan, the Roman god of fire and volcanoes, didn't qualify. Also, Vulcan might have infringed on the copyright of the original Star Trek series. Montmerle says the team should have checked with the IAU before starting the competition.

Pluto's moons were eventually named for the second and third choices in the online vote: Kerberos and Styx. But many astronomers think it's time to take another look at the whole naming process.

"We have an explosion these days of various places to name," says Mark Sykes the director of the Planetary Science Institute, a nonprofit dedicated to planetary exploration. Powerful telescopes are turning up new objects like the moons around Pluto. Spacecraft are mapping craters and mountains on Mars, and Saturn's moon Titan. And now astronomers are finding hundreds of planets orbiting other stars. 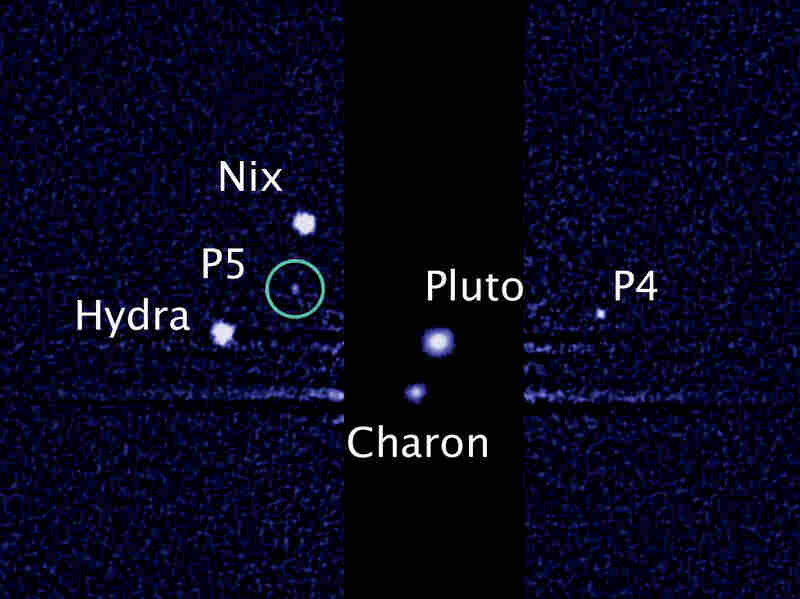 Pluto's two newest moons, designated as P4 and P5 in this image from the Hubble Space Telescope, will now be called Kerberos and Styx. NASA/ESA hide caption 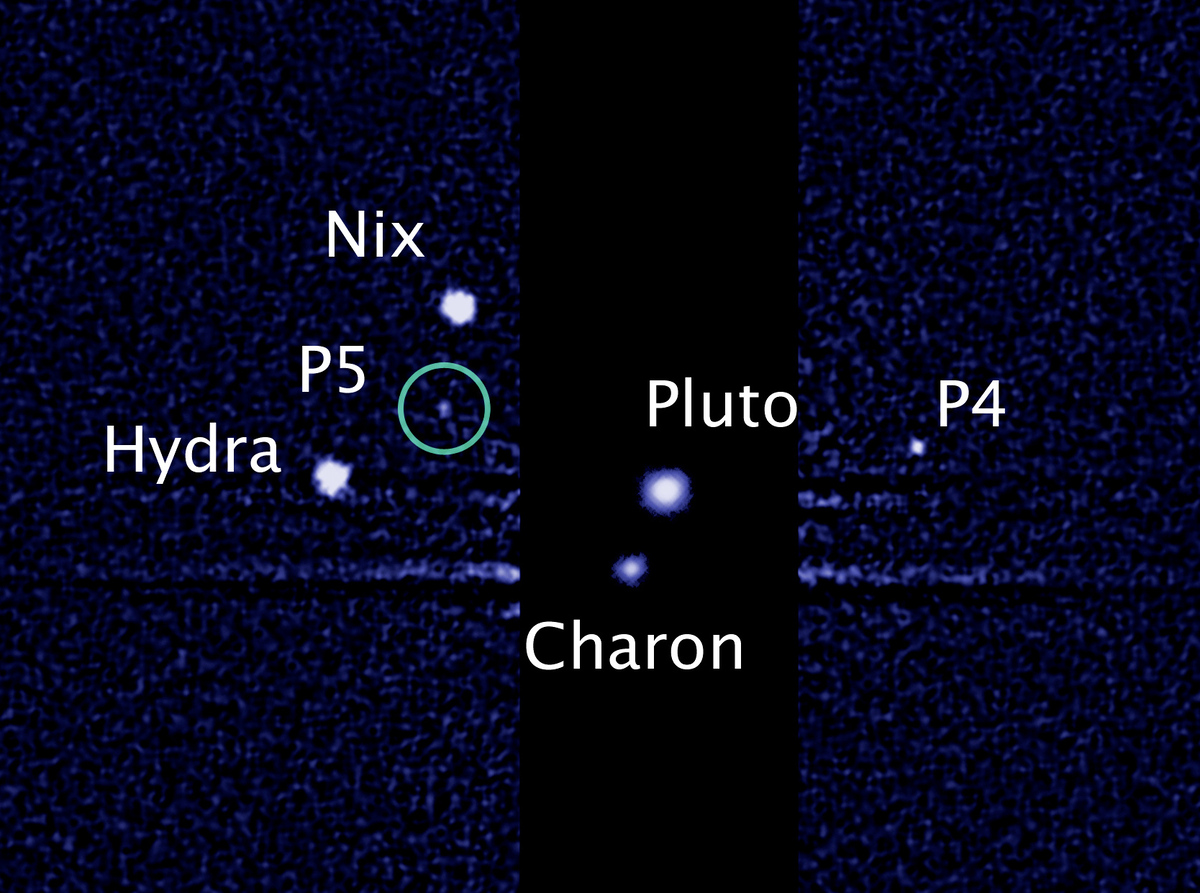 Pluto's two newest moons, designated as P4 and P5 in this image from the Hubble Space Telescope, will now be called Kerberos and Styx.

These new planets are where the real fight is headed. Right now, they have numerical identifiers, but no popular names. Montmerle says the IAU is now drawing up rules to involve the public. The rules would keep the naming of planets orderly and be globally inclusive, he says.

But astronomers have started giving the planets popular names themselves, says Jason Wright, an astronomer at Pennsylvania State University. "These sorts of popular names come up in press releases or even acknowledgements of a paper," he says. Copyright isn't apparently an issue for many of them. "There's been at least one planet that's been dubbed 'Tatooine' because it orbits a pair of stars like the stars in Star Wars."

Others are trying to involve the public in ways similar to the Pluto vote. One startup company called Uwingu allows the public to nominate and vote for names of planets outside the solar system — in exchange for a small fee. "We're using those funds to fuel grants in astronomy and space exploration," says Alan Stern, a planetary scientist and Uwingu's CEO.

Stern think the IAU does have a role in regulating the official, scientific designations of planets. But he feels the organization is going too far. "Even in the IAU's bylaws, it's pretty clear that the IAU is there to serve the astronomy community," he says. "It's certainly not a police force for the public."

Sykes, who holds a small stake in Uwingu, agrees: "The IAU can try to claim the universe, but lots of star systems will be falling through its fingers," he says.

Astronomer Jason Wright says he understands that the name battle will continue, but he hopes the public will keep it all in perspective. What matters most about the objects astronomers discover is what they can teach us about our place in the universe. "In the grand scheme of things, what we call these things is not that important," he says.