Accessibility links
Whose Term Was It? A Look Back At The Supreme Court The end of this latest Supreme Court term leaves us with questions: Is it Justice Kennedy's court or Justice Roberts'? Does pragmatism triumph over ideological purity? 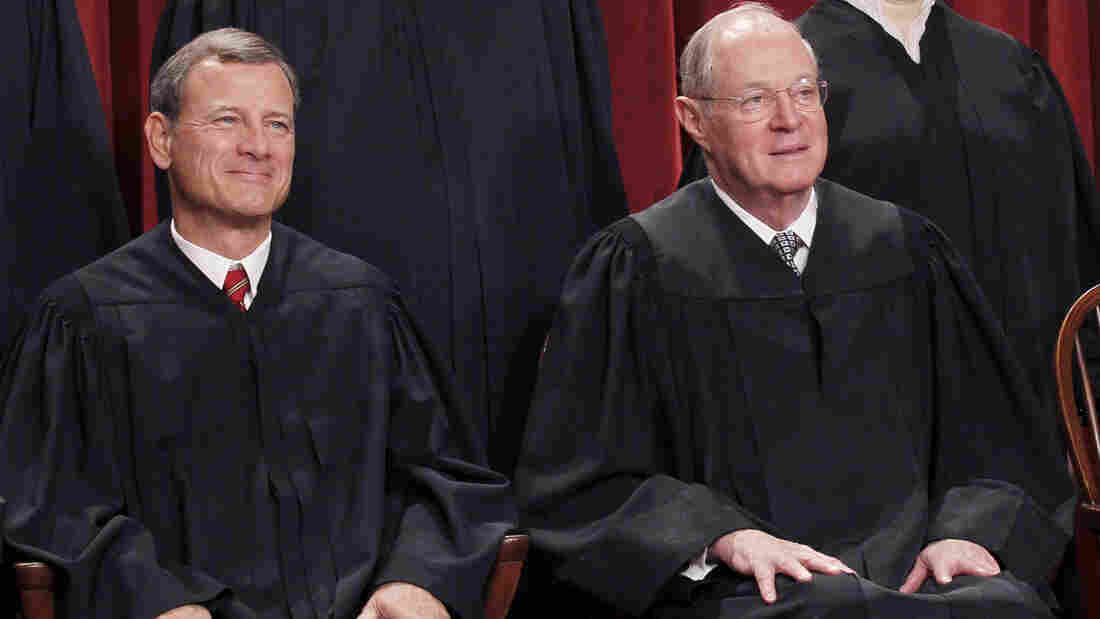 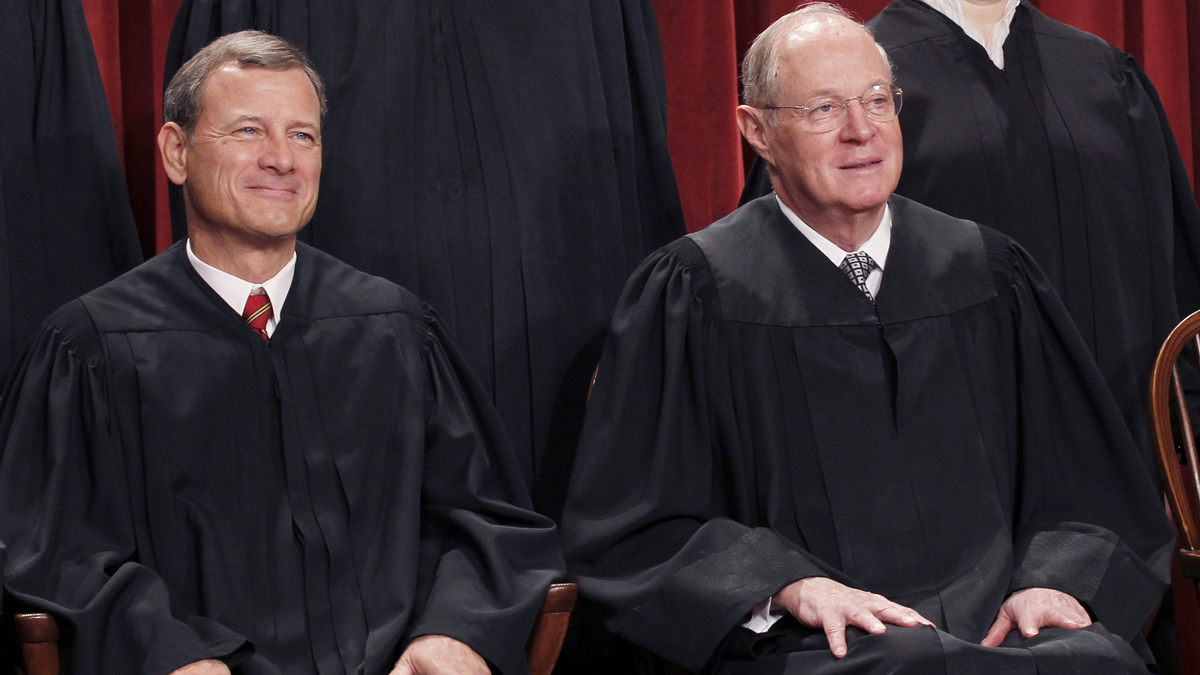 It would not be an exaggeration to call the recently completed Supreme Court term a lollapalooza. Day-by-day on the last week of the court term, the justices handed down one legal thunderbolt after another: same-sex marriage, voting rights, affirmative action. The end-of-term crush of opinions made so many headlines that other important decisions got little public notice.

If this was the term of equality, the question is whose equality prevailed. In the same-sex marriage cases, the winners were gay and lesbian couples, and the losers were the voters and legislators who had enacted laws that barred recognition of same-sex marriage.

In the voting rights case, the South, which for decades had to clear any voting changes with federal officials, saw itself liberated, while African-American and Latino voters saw the decision as once again allowing historically hostile states to suppress the right to vote for minorities.

And in the affirmative action case, the court's 7-to-1 compromise allowed everyone to claim victory and fight another day.

In terms of leadership and clout on the court, whose term was it? Was the dominant figure, Justice Anthony Kennedy, who voted in the majority in nearly every major case, often writing the majority opinion?

Or was it Chief Justice John Roberts? After all, he engineered more unanimous rulings than usual and wrote the opinion gutting the Voting Rights Act, a law that he had long opposed.

One leadership scenario has Roberts steadily pulling the court to the right, acting strategically to achieve his conservative goals, and knowing that that he will likely serve for another two decades at least.

Another scenario has Justice Stephen Breyer and the liberals making compromises, as in the affirmative action case, to stall off what otherwise would be decisions antithetical to liberal views.

But in either of these scenarios the victory goes to the justice who can amass five votes, and without Kennedy, that is usually very difficult to do.

For many court watchers, like Cornell Law School's Michael Dorf, the same-sex marriage cases this term were the epitome of the court's most important role.

More On The Supremes

"Its chief cultural significance is in deciding cases that involve rights of the minority against claims of the majority, and there's just no question that the leading cases were the same sex marriage cases," Dorf says. "So with that victory for the gay rights claim, that means that whatever else happens, you can call this a successful term for the liberal wing of the court."

But the same-sex marriage cases also had some internal contradictions. In the DOMA case, the court, by a 5-to-4 vote, struck down the federal law that had barred federal benefits and recognition for same-sex couples married in states where such unions are legal. In his majority opinion Justice Kennedy wrote expansively about the rights of gay couples to the same "personhood and dignity" accorded to legally married heterosexual couples. He was joined by the court's four liberal justices.

But in the case testing California's ban on gay marriage, a different court majority declined to intervene, leaving in place a lower court decision that invalidated the ban.

Writing for the court majority, Chief Justice Roberts said that the proponents of the ban on gay marriage could not take the place of state officials who had refused to appeal the lower court ruling. Joining Roberts in that decision were conservative Justice Antonin Scalia and three of the court's liberal justices — Ruth Bader Ginsburg, Stephen Breyer and Elena Kagan.

"It's the liberal justices who held back, but not Kennedy," says Michael McConnell, director of the Stanford Constitutional Law Center. "Ginsburg, Kagan and Breyer believe it was not good for the country to strike down the traditional definition of marriage nationwide." At least not yet.

So for now, the question of whether gay couples everywhere in the country have the right to marry remains unresolved. And that may be due in part to liberal justices wanting to give the country more time to resolve the issue by ballot or with legislation in more states.

Still, with California now added to the list of states where gay marriage is legal, the number is now at 13 states — states that account for nearly one-third of the nation's population.

The decision cutting the heart out of the Voting Rights Act was also 5-to-4, but this time along more familiar lines, with Kennedy joining the court's most conservative four justices. Chief Justice Roberts wrote the decision, siding with Shelby County, Ala., which challenged the law as unconstitutional. The Voting Rights Act's formula determining which states are covered, he said, was based on old data and therefore treated the southern states unfairly and unequally.

Although the decision was hailed by many political conservatives, its reviews from academic and judicial conservatives were considerably less admiring.

Stanford's McConnell says the decision's reasoning is just "made up."

The voting rights, same-sex marriage, and affirmative action cases accounted for only four of the 73 signed opinions of the court this term. Nearly one-third of all the cases were by a narrow 5-to-4 vote, and in most of those sharply divided cases, the split was along liberal-conservative lines. Liberal critics see many of these decisions as closing the courthouse door to the little guy.

"If you look at the full run of the court's decisions this term, what you see is a court that made it harder or virtually impossible for consumers, victims of surveillance, and human rights victims to bring lawsuits in federal courts," said Georgetown Law professor David Cole. And he said that the court had also made it "much more difficult for victims of employment discrimiantion to get relief."

In cases that pitted consumers or small businesses against big business or where employees claimed discrimination on the job, the conservative five-justice majority sided consistently with corporate interests. Indeed, the Chamber of Commerce prevailed in all seven of the cases in which it filed briefs.

But Michael Carvin, who represents business interests in the Supreme Court says all the court did was accurately read the statutory language that Congress wrote.

"Every time the plaintiff's bar doesn't get a successful victory against an employer or a company, it claims that people are closing the courthouse door," he says. "That's not what's going on here."

It is fair to note, however, that in a wide variety of opinions, the court did restrict the avenues for litigation against business interests and the government. The one exception to that trend: Cases involving property rights. Property owners won all three of the cases they brought to the court this term.

Criminal law was the one area where the five-justice conservative majority most often fell apart, usually because the conservative Justice Scalia defected.

The audio of this story, as did a previous Web version, incorrectly characterizes a quote from John McGinnis of Northwestern University Law School. When McGinnis said, "I'm sorry to say I think this opinion was as singular a failure as I've seen in the history of the Supreme Court," he was speaking about the court's decision in the Defense of Marriage Act case, not the Voting Rights Act case.