Accessibility links
With Bullets Scarce, More Shooters Make Their Own Factories are running at full capacity to try to keep up with the surging demand for ammunition in the U.S. The current shortage has prompted more shooters to take up "reloading," or making one's own ammo. But now, even the components needed to make one's own bullets are harder to come by. 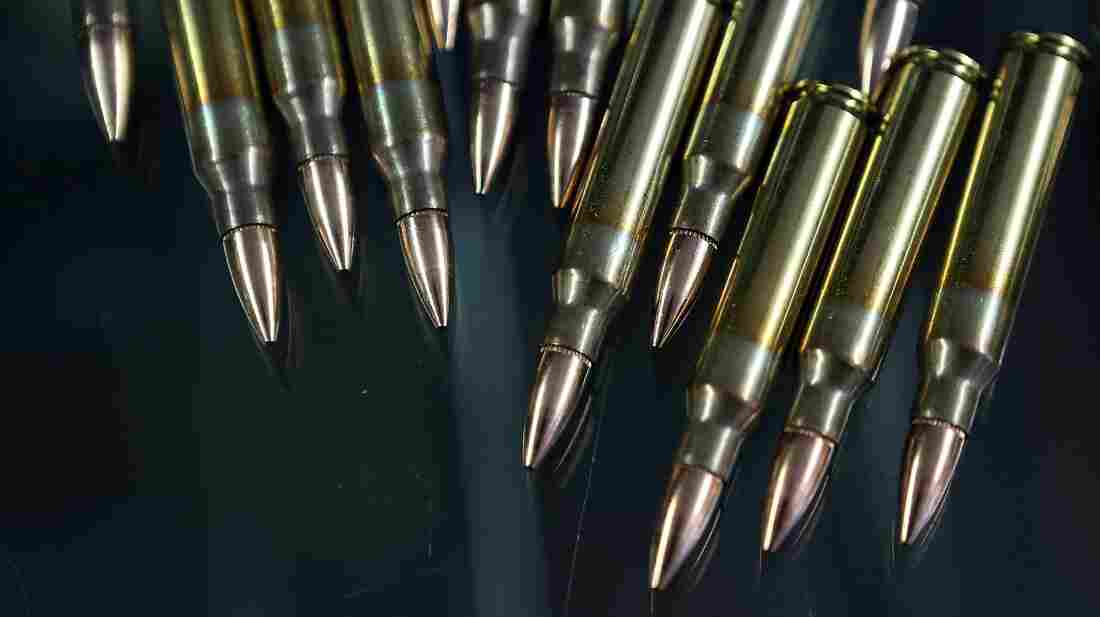 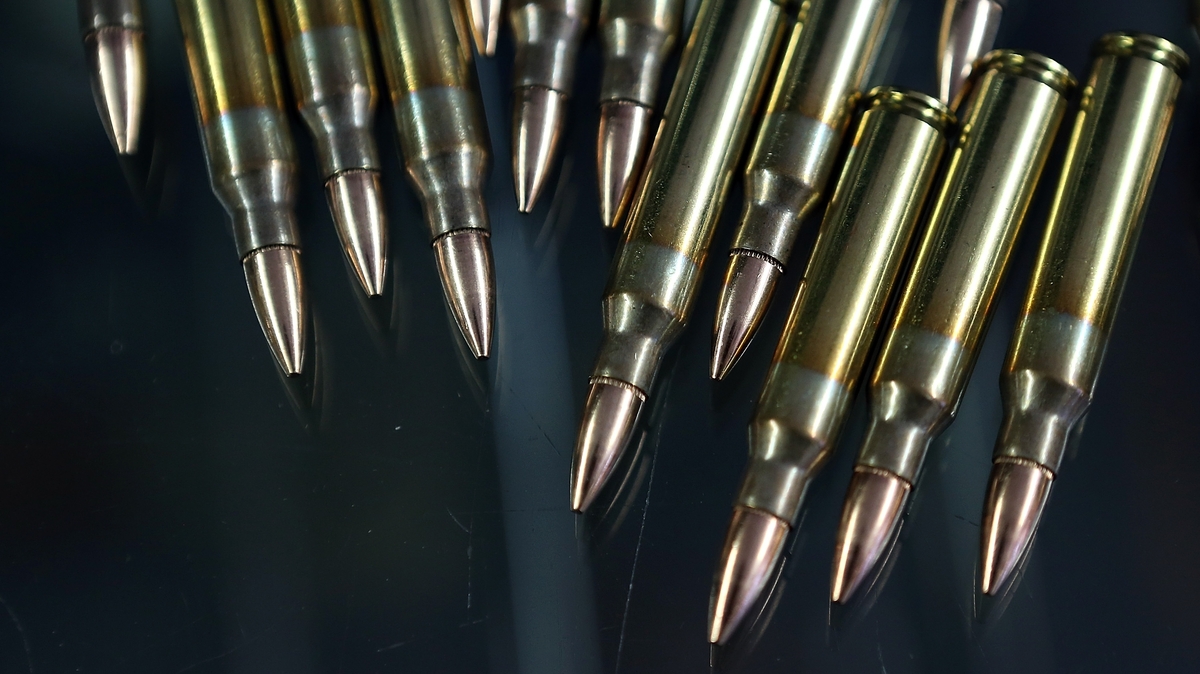 Since the Newtown school shooting in December, gun stores nationwide have had difficulty keeping ammunition, like these .223-caliber rifle bullets, in stock.

Gun stores around the country have had difficulty keeping up with demand for ammunition in recent months. Fears of government tightening of gun and ammunition controls have meant that retailers, from Wal-Mart to mom-and-pop gun shops, haven't been able to keep bullets on the shelves.

Cliff Poser's gun shop, Cliff's Guns, Safes and Reloading in Boise, Idaho, is one of them. Business has been so crazy lately that he has to keep a special stash of ammunition, just so customers who buy guns from him can also buy bullets.

Poser says the current ammunition shortage is the worst that he's seen. "I've been doing the business for 33 years, and, I mean, as big as we've gotten, we still can't take care of all the people that are coming in."

Shopper Robert Nicholson says buying cheap ammunition for target practice on the Internet used to be easy. "You know, buy a thousand-round steel case, .223 [caliber] for 150 bucks," he says. "Now, you can't touch it for less than $400." 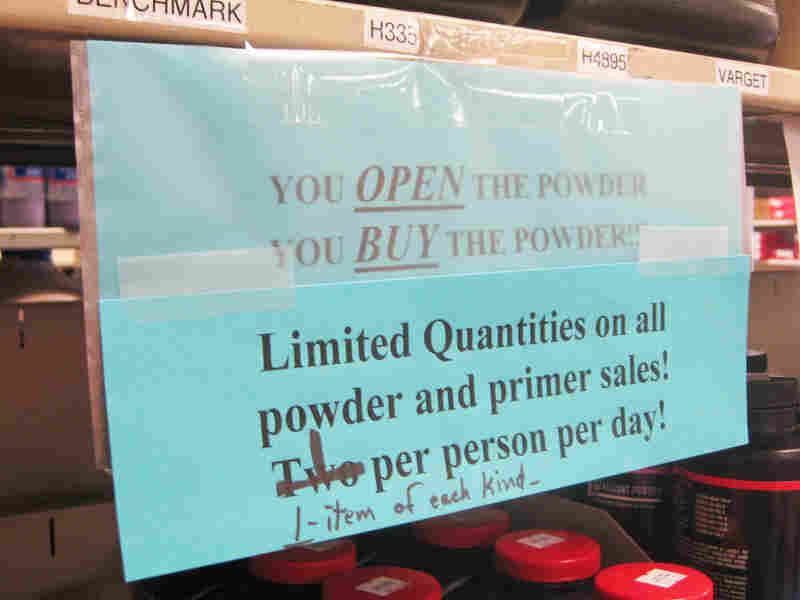 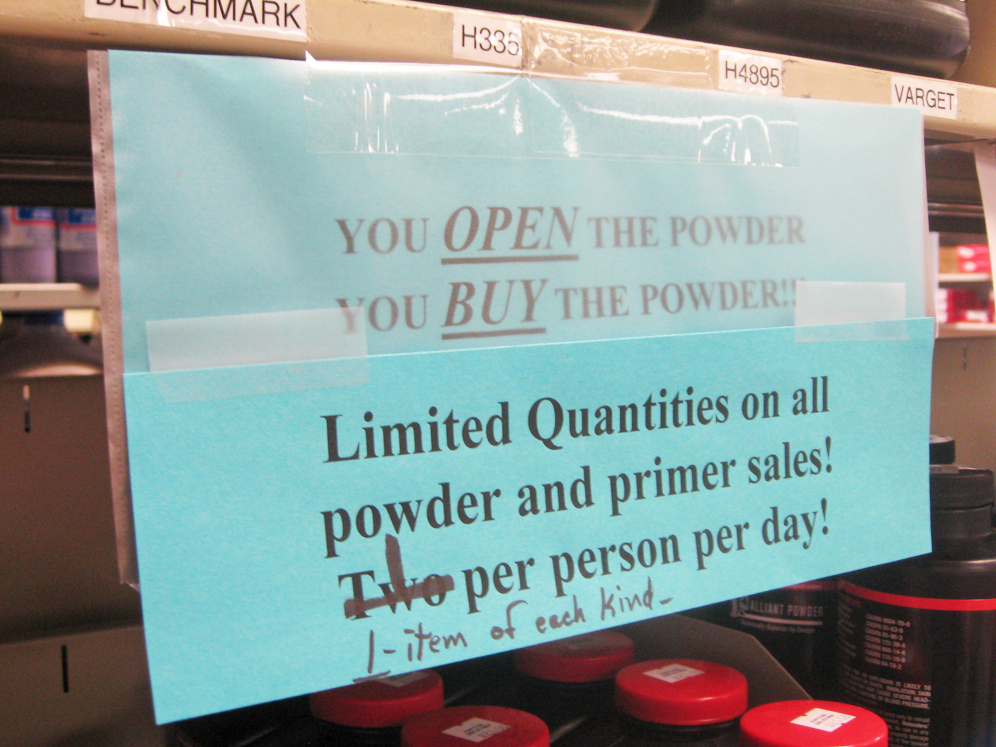 With more customers making their own bullets, Cliff's Guns, Safes and Reloading in Boise, Idaho, is restricting sales of bullet components like gunpowder.

So Nicholson, like thousands of other shooters, is going a different route. He's making more of the bullets he shoots. Shop owner Poser says the scarcity of ready-made bullets has frustrated shooters to the point they're spending between $200 and $1,000 to get into the hobby known as "reloading."

Derek Emmert is one such enthusiast. He's making his own bullets "partially for hobby, something to do," he says. "But, as well as, the cost of ammo off the shelf is outrageous right now. So if I can reload my own ammo, it's gonna cut costs and make shooting a little more cheaper."

Emmert sits with several other men around tables set up in the back of Poser's shop. They're here for a Saturday morning class on reloading. They listen as the instructor goes over the importance of adding just the right amount of gun powder. Too much, the instructor tells them, and you can "blow up your gun."

But this increased interest in reloading has also led to shortages of the equipment and components needed to make bullets. Companies just haven't kept up with demand.

"It's been a challenge because we're used to operating at a certain level," says Mark Pixler, a spokesman for Arizona-based Dillon Precision. His company makes presses that assemble ammunition components into a finished bullet. Pixler says calls have come in so quickly that customers crashed the company's phone system.

"We were literally unable to make outgoing phone calls. So we literally had to go and buy some prepaid cellphones so that we could conduct essential company business on the telephone," he says.

To try to keep up with demand, Dillon Precision has hired back retired salesmen, asked parts suppliers to ramp up production, and added a second shift at its factory. Pixler says the company is doing more business than ever before, but thanks only to what he sees as a few people hoarding.

Back at Cliff Poser's shop in Boise, Poser says the store's busy streak has been good for the bottom line. He says he surpassed his 2012 sales totals this year by early May.

"We hope the business continues to grow," he says. "But having a business that's expanded by people who are not being necessarily sound-minded is not going to be solid business; it's not going to continue."

Poser thinks there's been a bubble in the ammunition world that will soon pop. Once shooters stop fearing new restrictions, he predicts, they'll start to use up their surplus bullets. And when that happens, he'll see less business. There have already been signs in recent weeks, he says, that the slowdown is already starting to happen.