Accessibility links
Eleanor Friedberger's 'Personal Record' Examines The Little Things The bulk of Friedberger's work thus far has been recorded with her brother, Matthew, under the name The Fiery Furnaces. For this new solo album, her second, she's written with a new collaborator in singer-songwriter John Wesley Harding. 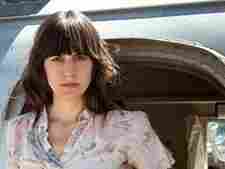 Personal Record is the second solo album by Eleanor Friedberger of The Fiery Furnaces. Courtesy of the artist hide caption 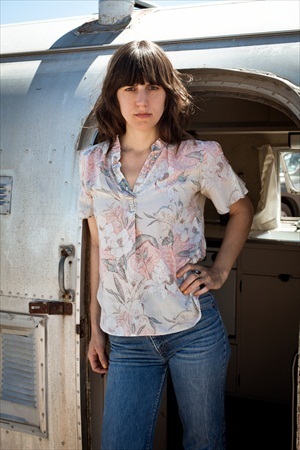 Personal Record is the second solo album by Eleanor Friedberger of The Fiery Furnaces.

One major source of pleasure in the music Eleanor Friedberger makes as half of The Fiery Furnaces is a matter of sheer density — the density of The Fiery Furnaces' musical ideas, the thick layers of words, lyrics that operate as dense sounds with meaning to be extracted from them. By contrast, the music and lyrics Friedberger has crafted for the aptly titled Personal Record aren't of lighter weight — as an artist, she's never a lightweight — but these new songs possess a buoyancy that can belie the words.

In "I Don't Want to Bother You," a lovely melody contains a lyric in which the narrator protests against complacency and mere contentment. She sings that while the person she's addressing the song to has given her everything she'd ever wanted, she wants something riskier: "I want to be scared and I want to be haunted / Judgment impaired by despair." Doubtful, unsure and thrown off-balance by someone else's opinions and desires — these are some of the elements that inspire the sound of this new album.

Eleanor Friedberger has collaborated on all of these new songs with John Wesley Harding, the British singer-songwriter and novelist. It's always dicey for an outsider to try and guess who contributed what in any given composition, but generally speaking, what I hear on this album that distinguishes it from Friedberger's previous solo and Fiery Furnaces work is a certain tightening of the rhyme schemes, as well as a narrowing of focus. A song such as "My Own World," for instance, sounds like the sort of composition that could have been written by British novelists who specialize in small, quiet moments, such as Henry Green or Ivy Compton-Burnett. It prizes quietude and the way small, everyday actions — working at a desk, clipping coupons — can illuminate a state of mind.

In a recent interview, Friedberger said that one goal of this album was to "write beautiful love songs that could be about you, your ex-boyfriend or your aunt." That's actually a very ambitious goal, couched in modesty. And that's what the best of this so-called Personal Record attempts: to locate the wonder and elation to be experienced from living the most ordinary moments of one's life with as much awareness as possible.