Accessibility links
Gays And Lesbians Turn Fight To Workplace Discrimination Ban With new momentum for same-sex marriage from the Supreme Court, gays and lesbians are hoping for progress in another sphere — the workplace. In 29 states, it's still legal to fire someone because of their sexual orientation or gender identity. Congress is again considering legislation to ban that. 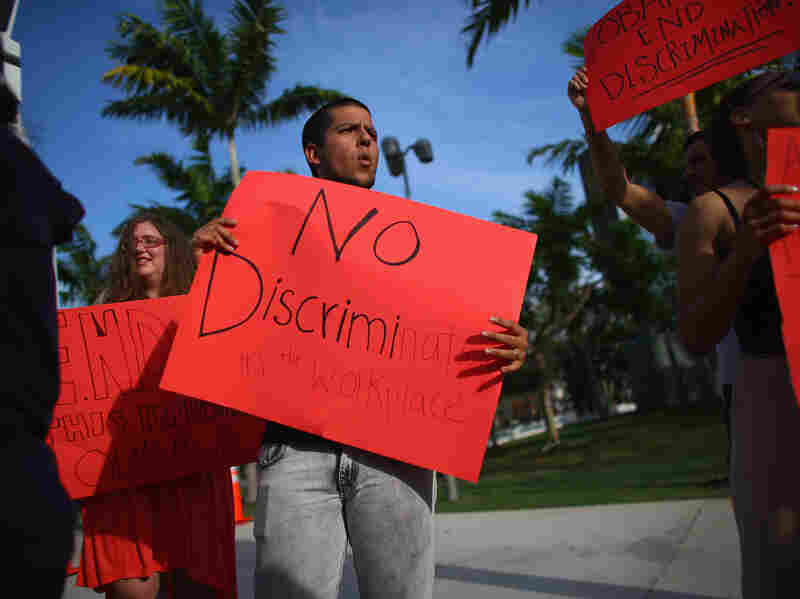 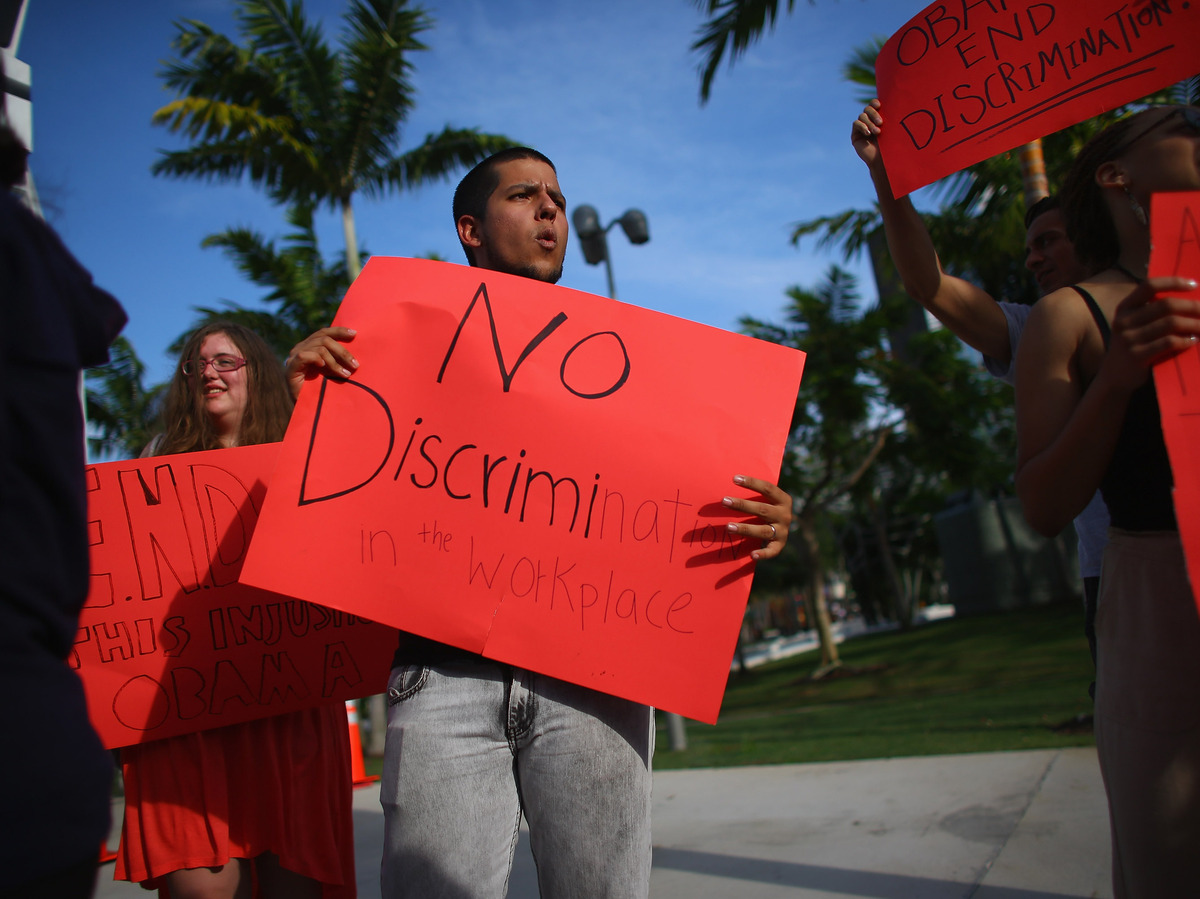 Esteban Roncancio and other protesters call for executive action on workplace discrimination for LGBT Americans in Miami.

With new momentum for same-sex marriage from the Supreme Court, gays and lesbians are hoping for progress in another sphere: the workplace. In more than half the country, it's still legal to fire people because of their sexual orientation or gender identity.

On Wednesday, Senate lawmakers will once again debate a bill that would change that.

Rea Carey, who heads the National Gay and Lesbian Task Force, says the recent Supreme Court rulings point out a cruel irony: Same-sex couples will have more opportunity than ever to get married, but if they put a photo of the wedding on their office desk, for example, many risk getting fired.

"When you talk to people about, well, do you think LGBT people are protected in the workplace? A lot of people will say, 'Well, of course they are.' And they're wrong," Carey says. "It is important to pass federal legislation, because while we are making progress, in some states, in some cities, that's not the case across the country."

In 2007, Amy Kraljev was head volleyball coach at a university in Louisiana. But soon after she started dating another woman, she says, she was called into her athletic director's office in the middle of the season. "He had wanted me to listen to a recording of a voicemail that was left," she says.

The voicemail was from a sports program supporter, and she says it complained about "lesbian lovers being around the volleyball team." The director warned Kraljev to be careful. Then, at the end of the season, she was told to resign or be fired.

When you talk to people about, well, do you think LGBT people are protected in the workplace? A lot of people will say, 'Well, of course they are.' And they're wrong.

Rea Carey of the National Gay and Lesbian Task Force

"I said, 'Is this because of my sexuality?' And he goes, 'Well, I'm not going to talk about that. It's just the parents and players don't respect you anymore, and we can't have you as the image of the coach,' " Kraljev says.

Carey says there's more support than ever for federal legislation in the Senate. But a bill to ban LGBT employment discrimination stands little chance of passing the House. In fact, it's failed to pass Congress year after year for two decades. Opponents argue it would violate the religious freedom of private businesses.

A video by the Family Research Council points to such an example in Canada, which has a similar law. A Christian aid group there hired only those who agreed to a moral code, including not to engage in homosexuality. An employee later said she is a lesbian and sued the group. In the video, Tony Perkins, president of the council, says the entire workforce had to undergo sensitivity training.

"Let's learn a lesson from Canada and say no to special rights based upon sexual behavior that threatens our basic freedoms," Perkins says in the video.

Gay In The Office: The Last Frontier Of Workplace Equality

Without federal legislation, the U.S. has a patchwork of state and local laws and individual company policies. This leaves more than half the country without legal protection, and surveys show large numbers of LGBT workers do report harassment or discrimination on the job.

"It really ranges from the very subtle to the not-subtle-at-all, and some of the things that you see in these cases would really just shock the conscience," says Greg Nevins of Lambda Legal.

Nevins has seen LGBT workers physically harassed, subjected to degrading verbal abuse or simply not hired. Courts have ruled that Title VII of the Civil Rights Act does not apply here, with one exception: transgender employees.

Mia Macy, a transgender woman, worked as a police detective as a man, Lisser says, and then "applied for a federal job in California, which is not where she was living."

Macy says that after a telephone interview, she was offered the job pending a background check. During that process, she asked that her files be updated, as she was transitioning to become a woman. The federal agency then revoked the offer and gave the job to someone else. Lisser says the EEOC deemed that unlawful gender stereotyping.

With just a few such rulings, though, the majority of LGBT workers are not protected. As with same-sex marriage, Carey of the National Gay and Lesbian Task Force sees a generational issue emerging.

With little likelihood of a federal law for now, states and localities will have to decide the issue on their own. Just last month, Delaware's governor signed a law banning discrimination based on gender identity.